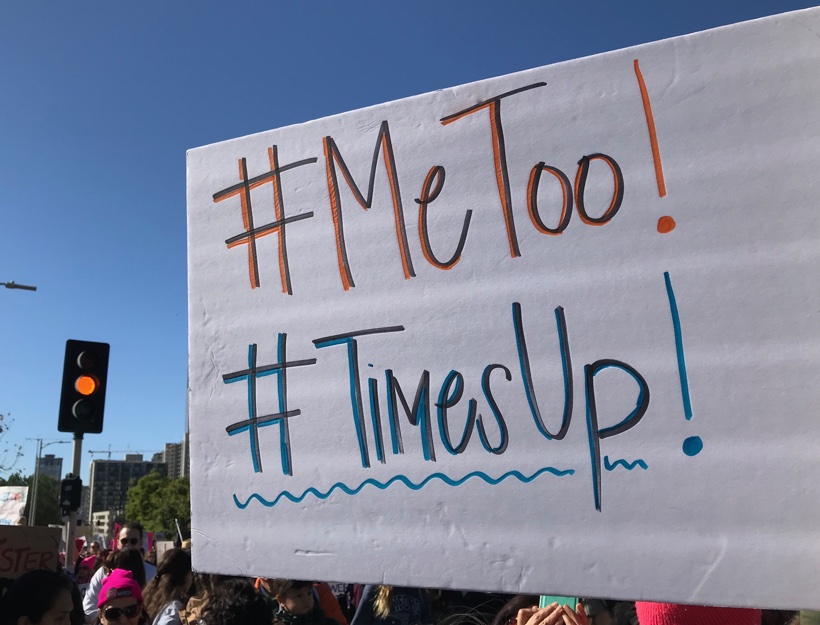 On the anniversary weekend of last year’s 2017 Presidential inauguration, I was able to mark my own participation in the historic Women’s March in Washington D.C. and join with at least half a million others to march in Los Angeles, California. I did not grow up in a politically active family, so my newfound participation has been a unique and empowering experience for me. Here are the reasons I marched, updated for this year:

Why Did I March? Why Will I March Today?
Because my faith informs my actions.
Because women are key in standing for “justice for all” in the U.S. and around the world.
Because diversity in humanity is something to be celebrated, not legislated against.
And now: #metoo

This year’s Women’s March was particularly important to me because of the recent #metoo and #timesup movements. I want to stand with women who are demanding real change in how women are treated in every area of life and demanding it NOW (#timesup!). Sexual harassment and assault are all too real and all too common of an experience among women and girls here in the U.S. and around the world. The high profile Harvey Weinstein and Women’s Gymnastics cases have served to highlight this painful reality. This march in L.A. is the fourth march and rally that I have participated in to date, and I’m sure there will be more to come. 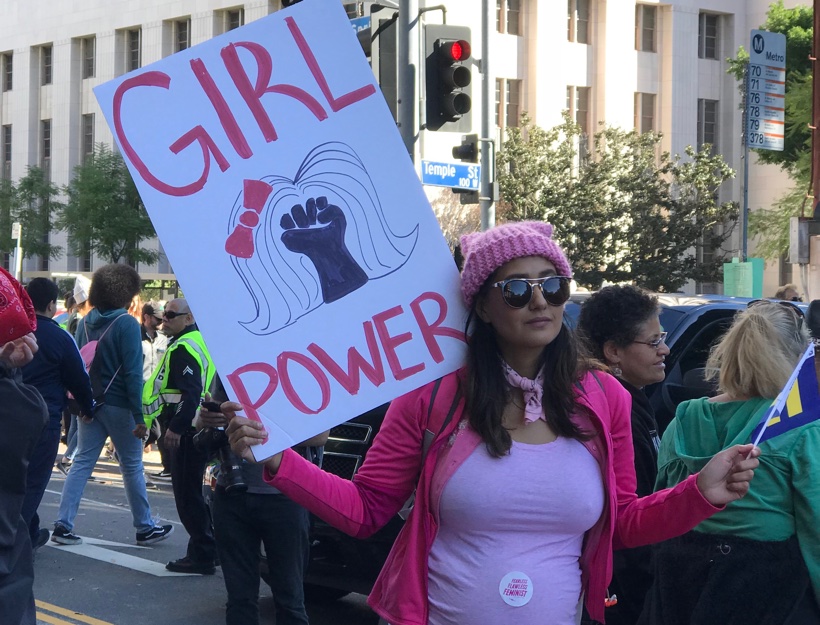 The woman above is a great example of those I’ve noticed participating in both the recent L.A. march and original Washington D.C. march. She’s underscoring the idea of girl power. She’s got the infamous Pussyhat on, and I’m pretty sure the sticker on her belly says something about “future feminist” on it. This year, the Women’s March organizers dropped the pink hats from being an “official” part of the march, but I don’t think the word got out to everyone. In fact, I saw loads of men wearing Pussyhats at the L.A. march, along with many women.

One of the things I love about the Women’s Marches that I’ve participated in is the intense feeling of being a part of something important and historic. It is amazing to be a part of an immense group of people, each with their own story about why they are marching, yet each person hoping to bring change and justice to all people. The courage represented by those that march, one by one joining in until the whole is together, is highly impactful and empowering. There is much courage to be gained as we stand together. I love the way the people arrive, trickling in from side streets and then moving together, making room for strollers, doggies, families and the like. This is how it began in L.A.:

As I’ve written about before, I think there is a difference between a “march” and a “protest”.  The marches I’ve participated in have all been peaceful and have had a very community-based feeling. In the past, that, unfortunately, hasn’t always been the case.  During the Civil Rights era of the 1950’s and 1960’s, there were many violent clashes and protesters were routinely jailed and even beaten or killed for taking a stand for righteous change. Even this past year, a woman was tragically killed during the protests in Charlottesville, North Carolina. At CultureHoney.com, we lamented the loss of her life as well as the hate that was on such display by the white supremacists that day.

It’s not necessarily an easy decision to march or participate in a political or social protest, and it’s a decision that each person has to make for themselves. Like many things, there can be an element of personal risk involved, for that reason and others, I think the choice to participate, or the “how” of participating is deeply personal.  For me, these “official” Women’s Marches have provided a way for me to participate. I’d like to think I would have stood with those in the first Civil Rights era (many are calling these days the ‘new’ civil rights era), but there are calls challenging women – especially white women – to show up and stand with the “Black Lives Matter” protests. I have yet to do that in person, but I do support the #BlackLivesMatter movement. In fact, the four marches I have been a part of so far have all been supporting specific ideas, or in one case a political candidate. Although protests definitely been a part of what’s gone on, in my mind I haven’t participated in an actual (like with civil disobedience, or sit-in or anti-war) protest yet. 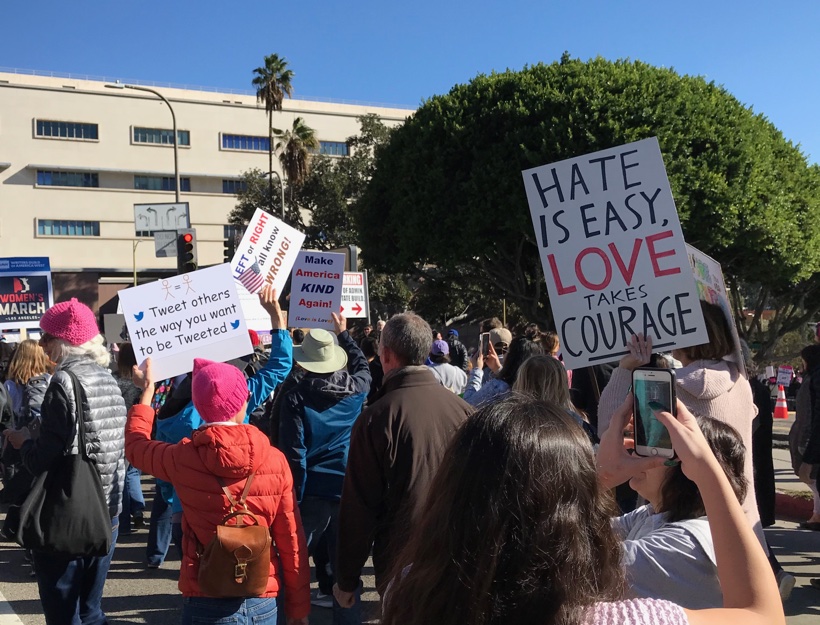 The sign above reads, “Hate is easy, Love takes courage”. I think that is what I have been examining these last two or three years in my own heart. What courage do I have? What courage can I share? What courage can I find with others? To stand for what is right? Decent and kind treatment for all? What about “Justice for All“?!

I believe all humans are of equal value, and I want to use my voice to call for my government that is “by the people and for the people” to reflect this deeply-held value! As I and others have examined the issue of white privilege, I have become more aware of the “others” and the plight of those that are living right next to me! What I’ve found is that my friends and neighbors of colour have had a nearly completely different experience of American life than I have. What future do we offer the children of today? 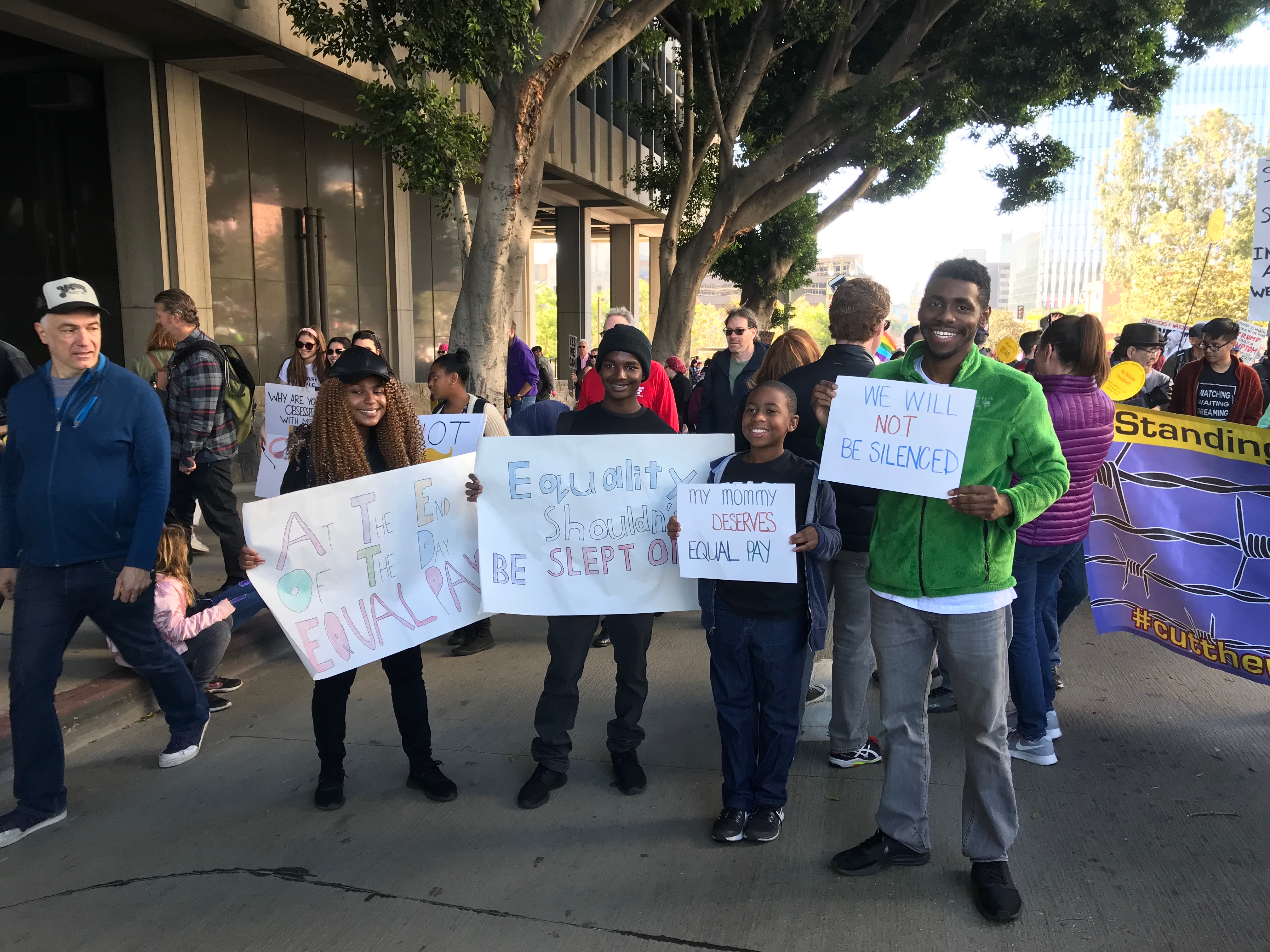 How does this newfound understanding inform me about myself, my society, our country and our world? As the implications become more and more clear, the idea of standing still or being quiet becomes less of an option. As I prayerfully consider what I CAN do, what I am ABLE to offer, along with writing and sharing my voice through articles and discussion groups, etc., participating in these marches and rallies is sometimes within my reach. I’m also hoping to encourage others to participate in these marches by sharing my experiences with CultureHoney.com readers.

In the thick of the march, almost to the Los Angeles City Hall:

I love this Muslim woman’s sign and her friendly smile when I asked her if I could take her photo! 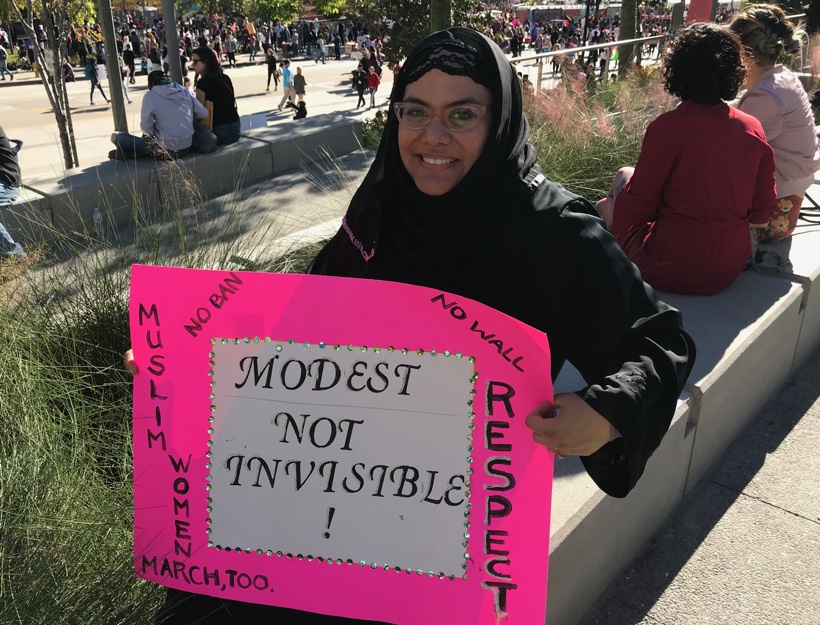 Many people chanted, “No ban, no wall” (definitely a protest chant!) and, “Say it loud, say it clear, immigrants are welcome here!” and I wholeheartedly joined them! Our elected officials need to know that we expect and demand that they implement real solutions for the Dreamers and those who work in and migrate to the U.S. Individual and governmental reactions and actions based on fear and bigotry are not just beneath our immigrant-built American ideals but they are life-altering harmful to those affected by these terrible viewpoints and actual policies. I believe that our country also needs to offer shelter to refugees and do our part to help those in desperate need from within our global family. I am definitely a fan of building bridges, not walls. 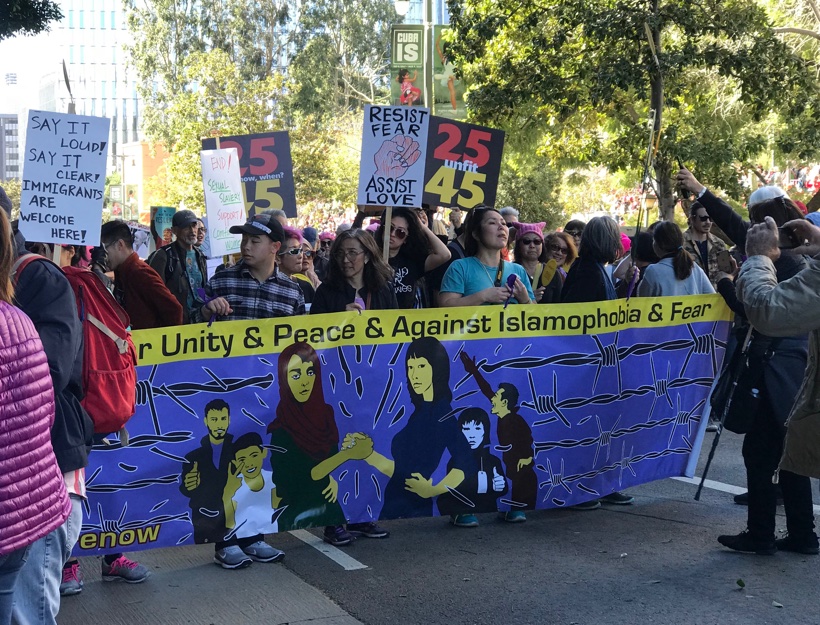 As the march wound around to the front of City Hall, there were many speakers and artists that spoke and performed on the main platform. Since I had my puppy with me, I couldn’t get that close to the front, but even from my stage-side vantage point, I enjoyed listening and being a part.

We each have a part to play. Not all can march, but I hope that each person will consider their involvement in the social and political process of our times. Remember, the “only thing necessary for evil to triumph is for ‘good’ people to do nothing.”

I took this photo of the blue sky and American flags as I bid goodbye to a beautiful Southern California day to exercise our freedom of speech and others guaranteed in the Bill of Rights:

“Congress shall make no law respecting an establishment of religion, or prohibiting the free exercise thereof; or abridging the freedom of speech, or of the press; or the right of the people peaceably to assemble, and to petition the government for a redress of grievances.” 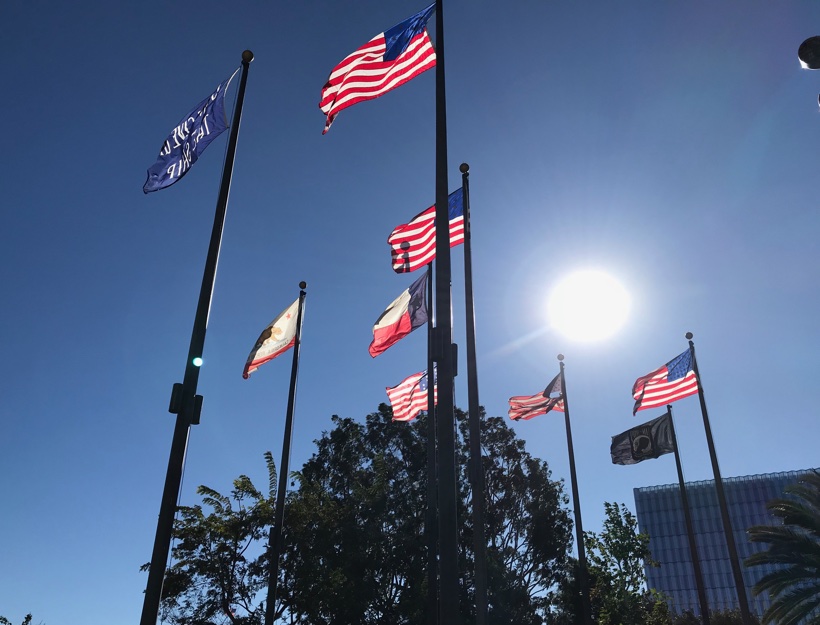