Some days are perfect to curl up with a book and a good cup of tea.

What if I told you that there is something like that out there right now? But instead of a book it’s a visual novel and instead of tea you get to enjoy the melody of notes that come with a cup of coffee. That game is Coffee Talk, a small indie game developed and published by Toge Productions. You play as a barista who gets to serve all kinds of customers, follow along with their stories and get a small slice of their life.

The story starts out in Seattle with all kinds of fantasy races that have been living on Earth for  a long, long time. You have high elves, orcs, vampires, werewolves and many more. They are all trying their best to get by through life and figure out how to live in a society that may not always have all the right answers for them yet. You, the player, play as a barista who works in a coffee shop called Coffee Talk. It’s a quiet establishment that only appears to be open during the evenings and late into the night. You start out the game choosing a name for your barista (in my case I went with Berry since I liked the way Berry the barista sounded). As soon as you figure out a name you are given a small description of this fantasy world version of Seattle before being greeted with your first customer: a human girl with short green hair and a mischievous smile. 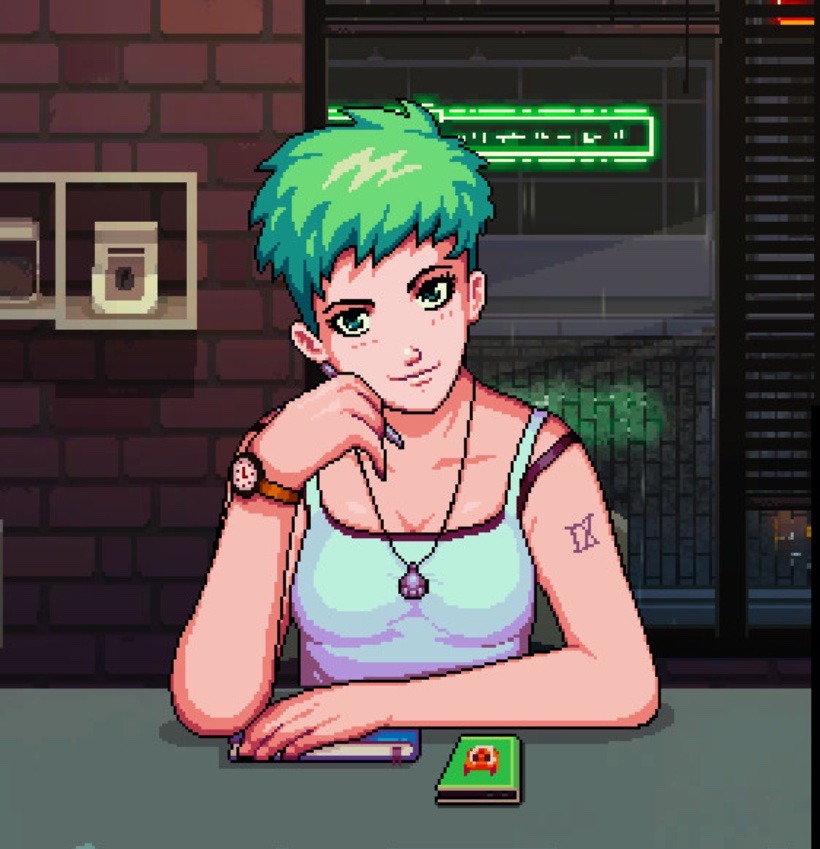 You soon learn through the dialogue that she’s one of your closest friends and a writer for the local newspaper. As the player you hear about her dreams of writing her first ever published book and that she has a chance to do so. While you hear about her tight deadline for this first draft you make her an espresso. This is where the biggest gameplay comes in. A screen to the right slides into place showing off a variety of ingredients that you can make drinks with. At first you don’t have much save for coffee, cocoa powder, milk and tea. Drinks consist of three ingredients and once you’ve selected and clicked “brew” you get these nice shots in the game’s beautiful pixelated art style of your character making the drink. Once it’s all set you have the option to either serve it or dump it if you messed up. 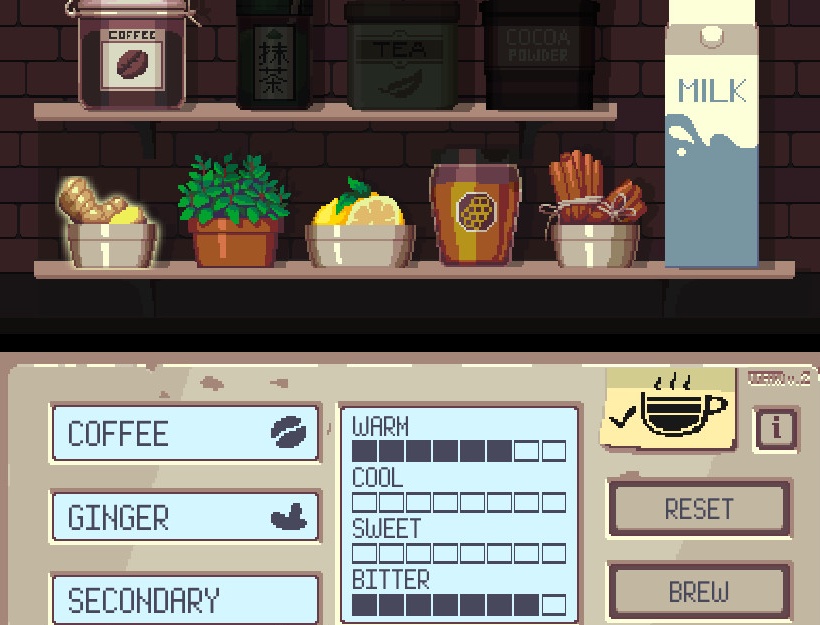 Don’t worry if you forget a certain drink’s ingredients, luckily your friendly neighborhood barista has kindly put all the recipes that you’ve discovered on their phone. That’s not all that is on your phone though – you can also look at the local newspaper and also see people’s social media pages on Tomodachill to learn little facts about the customers that wander into your shop. Lastly, the fourth feature on your phone is the ability to change to any track on the game’s soundtrack at any time.

And you can never go wrong with any tracks on this soundtrack, which brings me to the usual obligatory part of my article where I get to gush about the music for a few sentences. Oh man, can I gush about this music! It’s this beautiful lo-fi that adds so much atmosphere and ambiance to Coffee Talk. It makes you really feel like you are in a cool Seattle coffee shop. One of my personal favorites from the soundtrack is a track called “Tenderhearted”. It is a song that is both calm and relaxing while also packing a small punch of emotion into its notes. But honestly this soundtrack has so many wonderful tracks to listen to whether you are going on a walk, doing some homework or just staring out on a rainy day with a warm, frothy drink. Andrew Jeremy, the composer, really knocked it out of the park in my opinion and helped elevate this game to another level thanks to his music. 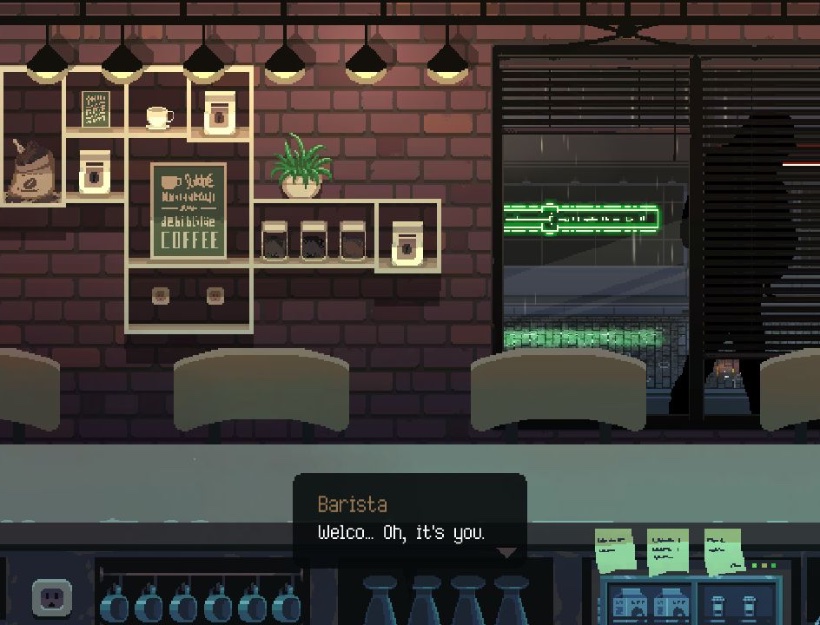 Music doesn’t carry a game though. Usually when it comes to games it is either the characters, story and/or gameplay that draw someone in. In Coffee Talk‘s case it is the characters. This game is primarily a character-driven game that offers you little glimpses into their lives and the ups and downs that come with them. As you have new customers wander into your coffee shop you learn snippets of their stories and are curious to learn more. While you are hearing them out through the dialogue you also get the chance to make them drinks they want; some are easier to figure out the recipe for and others may be more of a headscratcher. Still, you want to learn more about these characters and their stories since the game did a good job of forming a connection with them right off the bat. Whether it’s the beautiful succubus who is a kindhearted girl who loves her family and is usually misunderstood by others due her race, or Gala, a big, burly werewolf who is calm, coolheaded and a big softie that has been through hard times, all of the characters are intriguing. And while some might not be your exact cup of tea and may have a bit more of bite to them ( just like coffee) they are all well-written. 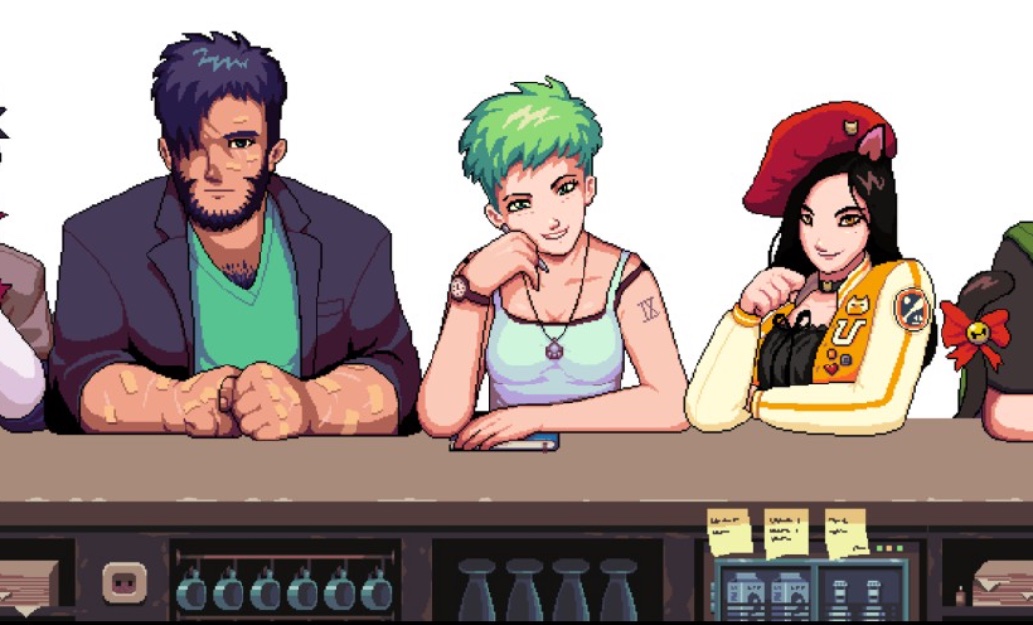 I could continue to go on and on about this little indie gem. How it has nice casual representation and gives hints at a potential happy ending for different pairings whether they had walked into the coffee shop dating or not. I could also give praise to the unique little animations that each character gets while they talk, highlighting their personality and complementing the dialogue. How little shadow outlines of fantasy folks stroll on by outside the windows of the shop to make Seattle feel alive and real. There is all of that and so, so much more that I could point out to show that this is an absolutely delightful game. It’s a short and chill game to play that is available on tons of platforms like Playstation 4, Nintendo Switch, Microsoft Windows, and Xbox One. With a price clocking usually under fifteen dollars (and that’s not counting when it’s on sale), please consider picking up this game so that maybe the next time a rainy day rolls on by you can pour yourself a warm drink and curl up with a playthrough of Coffee Talk.