At first, my attention was diverted to the Presse kiosk hosting the Polka Galerie announcement for the Willian Klein Photography exposition. 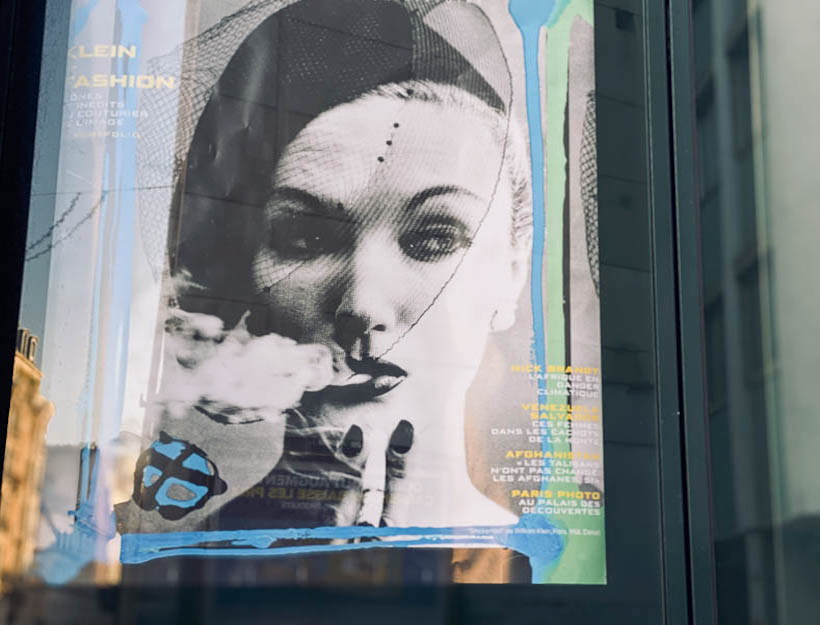 Earlier that evening as I was enthusiastically ‘en route’ to the Poste to send a package to California to arrive in time for my sister’s birthday, I realised it was a holiday and the Poste was closed. I headed home to leave the package and finish errands before catching the metro to attend the vernissage (opening) of an exposition: William Klein’s Fashion and Kristin Bedford’s Cruise Night at Polka Galerie, rue Saint Gilles in the 3°arrondissement. Polka Galerie is noted as an institution for showcasing well-respected photographers, for celebrating their contributions and for housing the works of some of the most noteworthy photographers we have the pleasure to know.

Essentially William Klein’s exposition was a collection of books and portfolio presentations for collectors. Born in 1928, the American-born French photographer has been the celebrant of many prizes for his numerous publications and films. Klein’s experimental approach has seen him flourish in the worlds of fashion and art and has also led him to be considered “among the fathers of street photography”. With completely improvised methods of shooting, he captures the banality of everyday life and the mundane actions of the people walking the streets around the world. Photography is a powerful tool for communication and my impression is that ‘the photographer’, and especially the ‘street photographer,’ more often than not is at least somewhat of a humanist.

Rightly, ‘keeping company with the best of them,’ presents the perfect segue to introduce Los Angeles-based photographer Kristin Bedford who was present this evening to expose her photographs and the beautiful new art book Cruise Night.

Cruise Night… An Anomaly in Paris

“Known for her quiet portraits of American cultural movements, Kristin Bedford’s new work, Cruise Night, is an intimate and un-staged exploration of Mexican American lowrider car culture in Los Angeles. From 2014 to 2019 she attended hundreds of lowrider cruise nights, car shows, quinceañeras, weddings and funerals. Bedford’s images offer a new visual narrative around the lowrider tradition and invite us to question prevalent societal stereotypes. Located at the intersection of aesthetics and social realism, her photographs explore the nuance of cars as mobile canvases and the legendary community that creates them. With the bold language of color photography and the female vantage point, Cruise Night is an original look at a prolific American movement set against the Los Angeles cityscape.” – Cruise Night 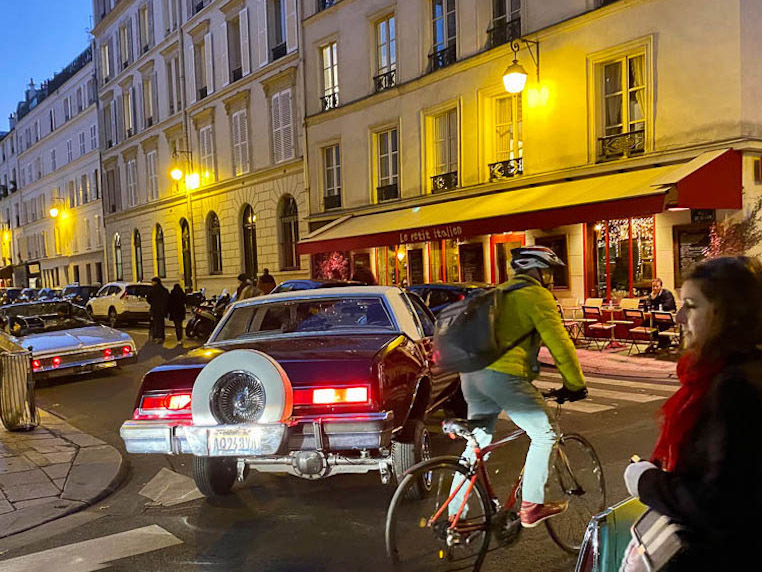 Vernissage, Cruise Night Paris, …atypical ‘Installation in action’ on a typical Paris evening in the 3° arrondissement 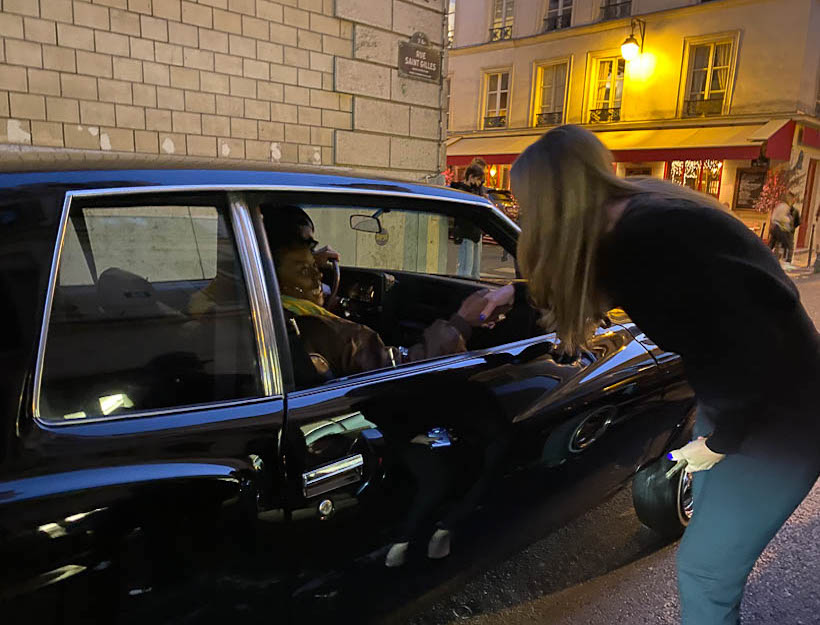 In addition to the photos and books, Kristin invited passionate participation via the unexpected installation component that not only amplified the music and delighted the attendees but also integrated an added kinesthetic, interactive learning opportunity. 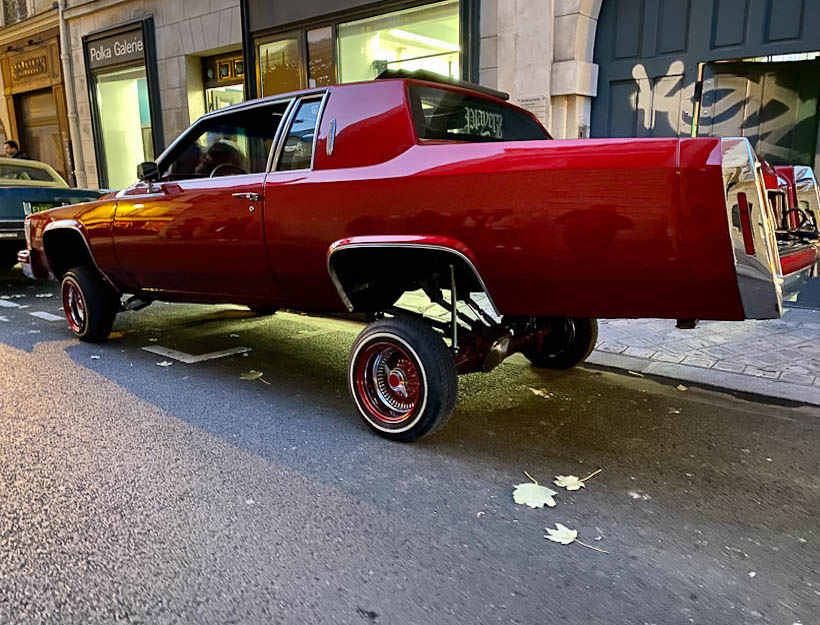 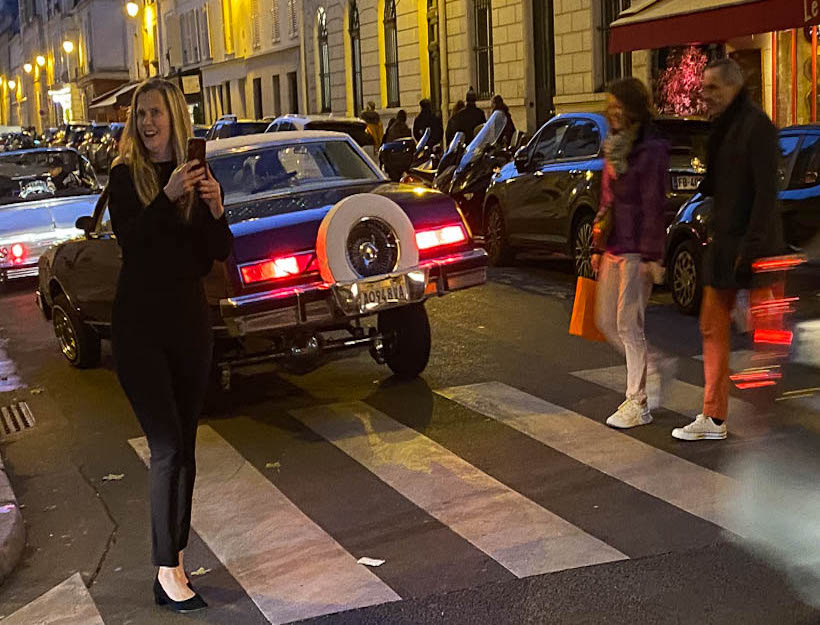 Vernissage, Cruise Night Paris… let the rumble begin and turn the volume up

Kristin’s exposition of the Los Angeles Mexican-American lowrider car culture in Paris 1) rallied the senses of excitement and wonder by inviting local clubs to participate and share their passions for this culture, and 2) shared her sensitive, sincere and heartfelt approach to photographing and exposing her own appreciation for the beauty inherent in the car culture which was both eye and heart-opening for attendees. Loud music and bopping, twisting, jumping rumbling cars stirred the energies which were evident in a visibly surprised, captivated and excited multi-stratified crowd. To fill your senses even more, get the feel and sense the vibe, have a look at this video to appreciate something of the feeling of the night as you continue to see real-time photos by following Kristin on her social media accounts. 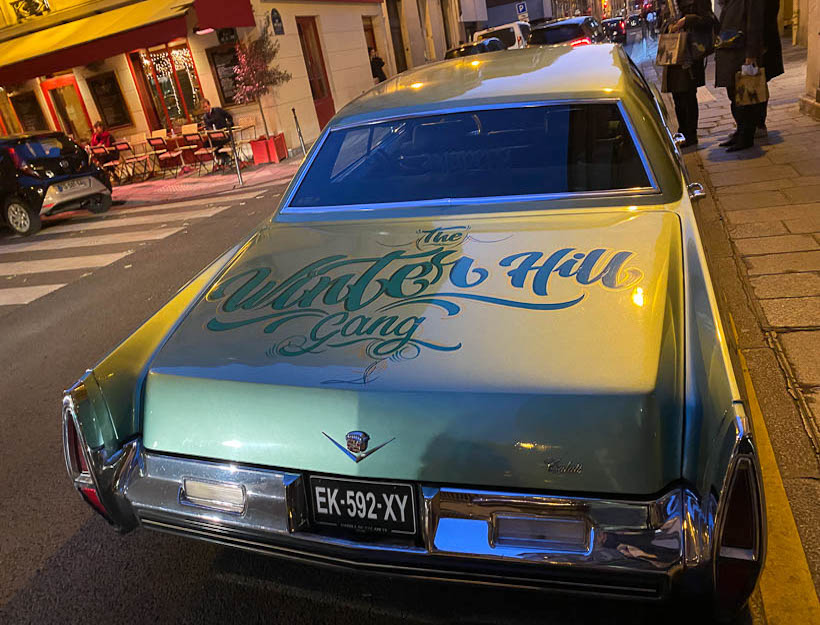 Lowrider car culture began in Los Angeles, California in the mid-to-late 1940s and during the post-war prosperity of the 1950s. Initially, some Mexican-American youths lowered blocks, cut spring coils, z’ed the frames and dropped spindles – whatever this means. I heard it explained that this evening three car clubs were present and that the ‘Installation’ cars present ranged 1968-9 to 1982. 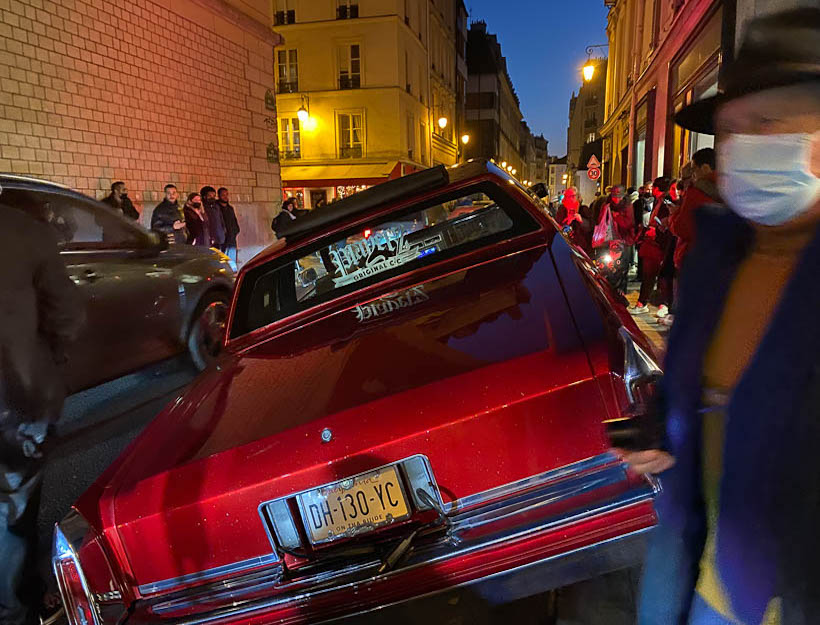 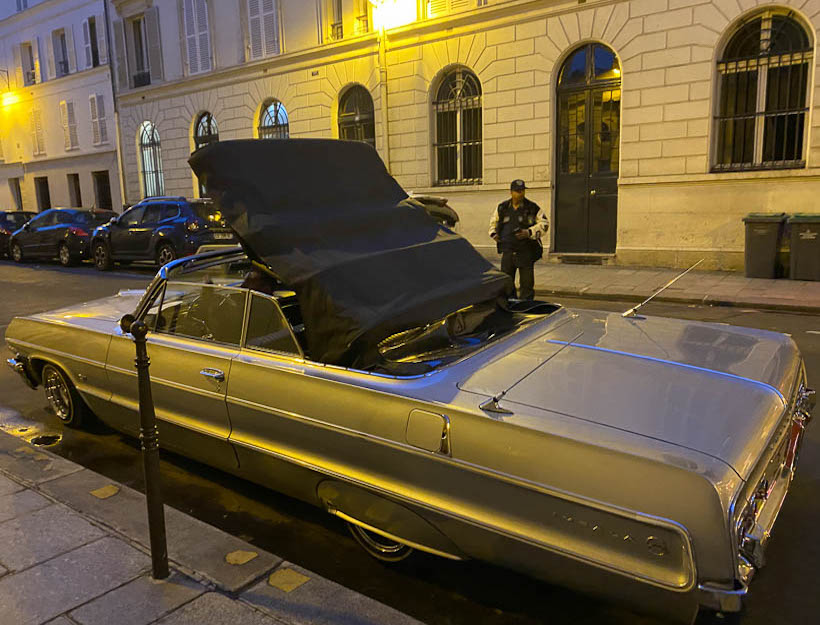 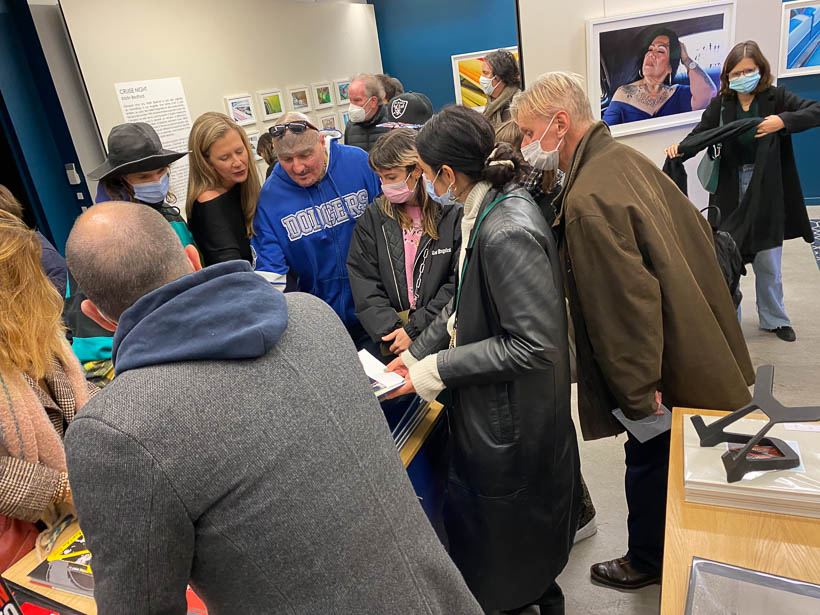 Vernissage, Cruise Night Paris… crowds gather to learn the stories behind the photos 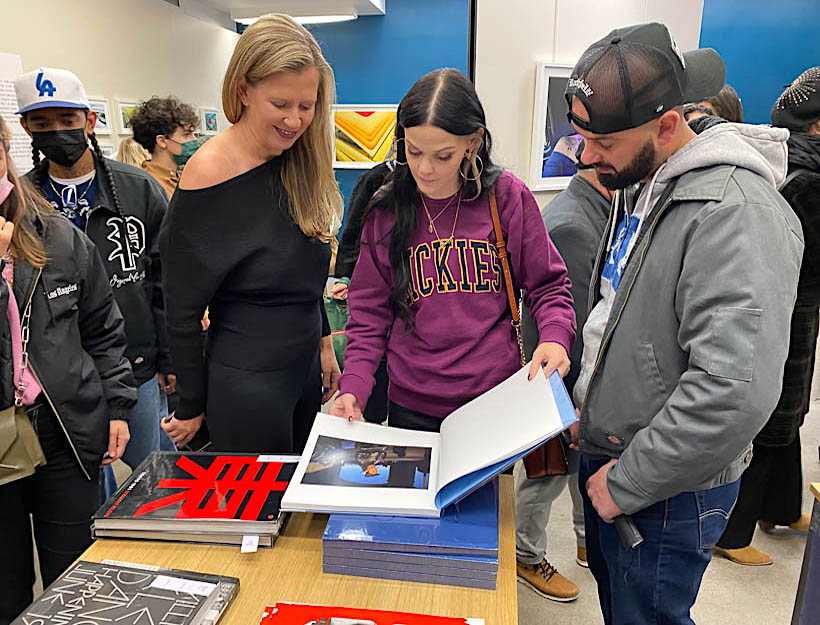 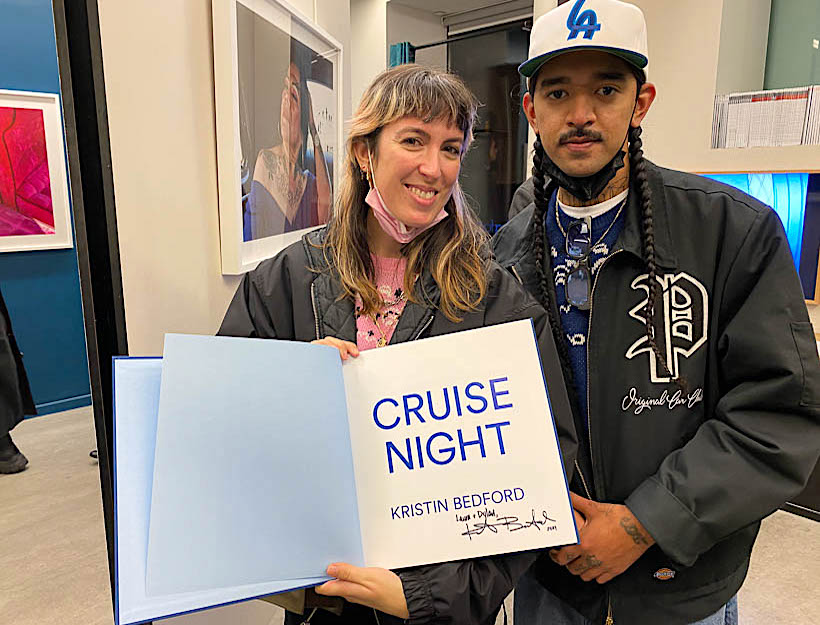 Vernissage, Cruise Night Paris… Laura and Dylan see a car in their future; their book will fuel their dream and inspire clarity for choices about their car 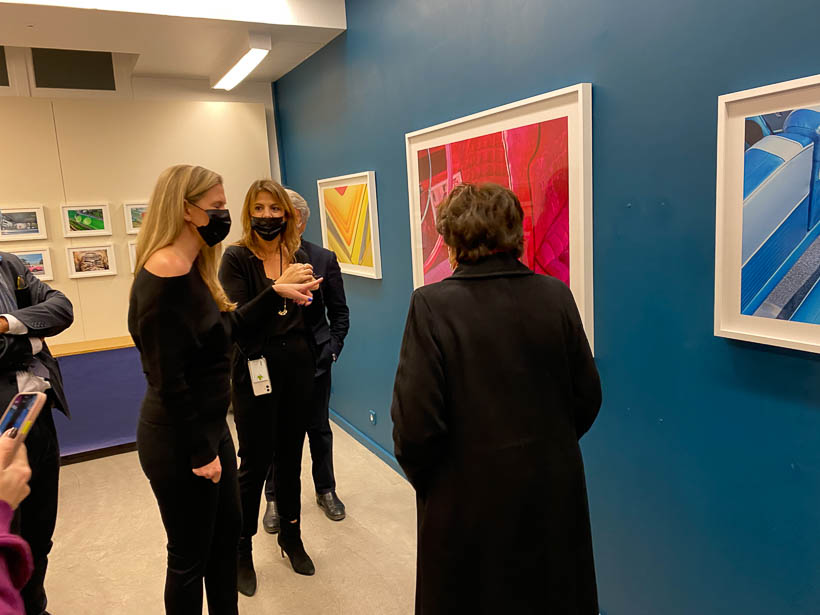 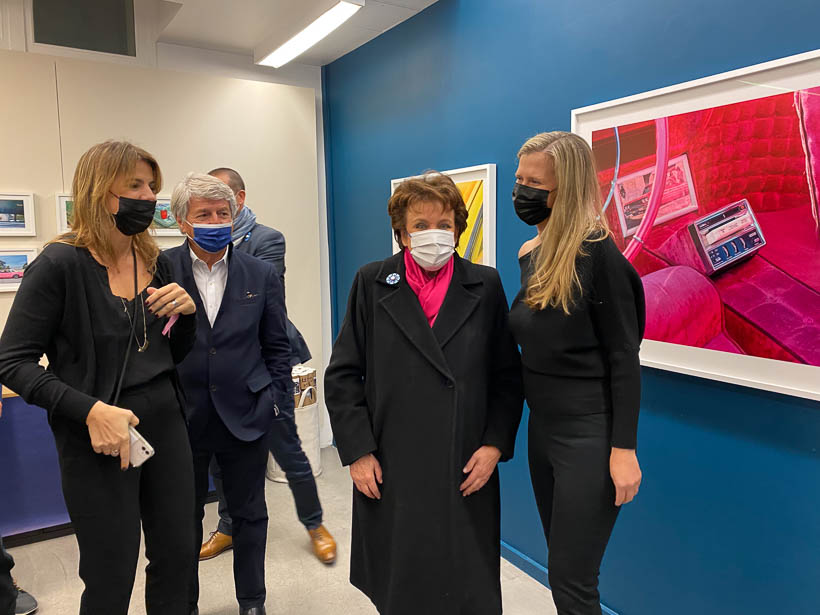 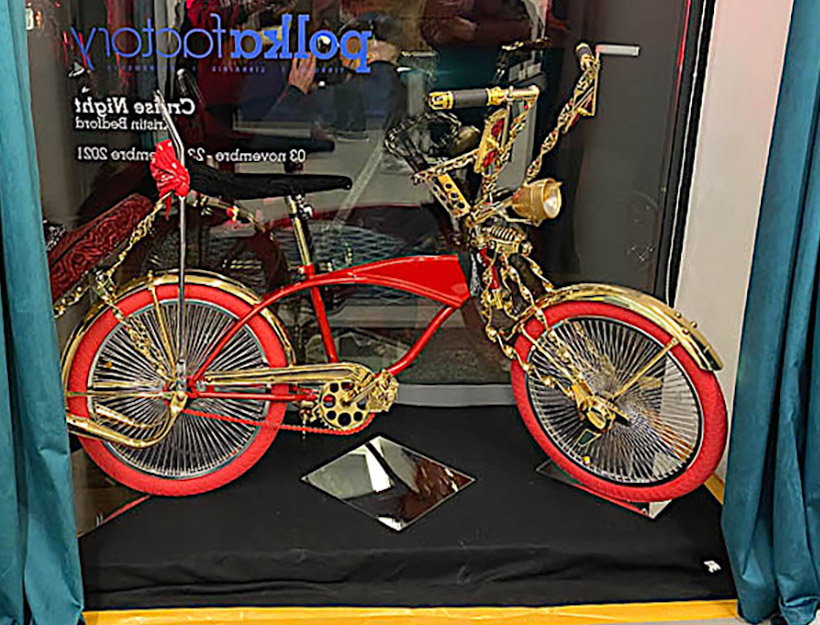 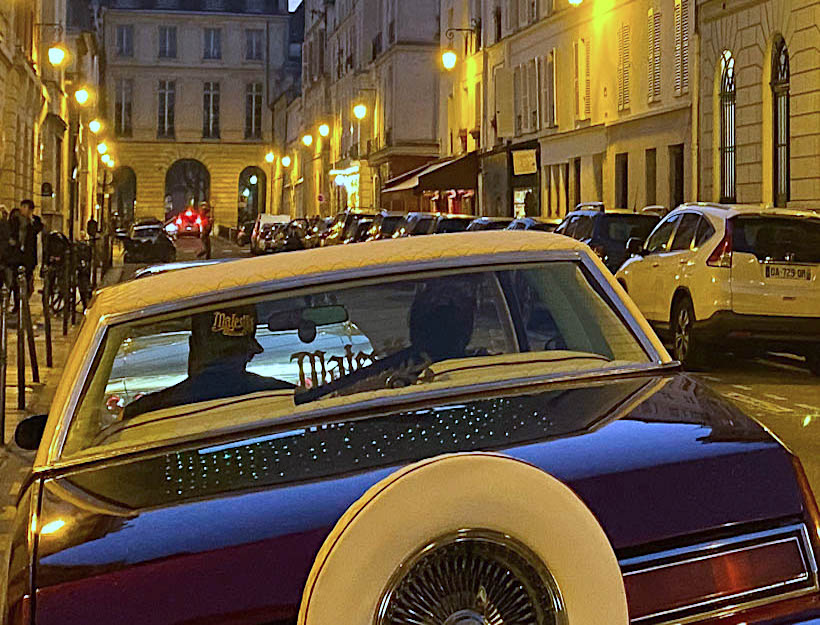 Notably, Kristin’s photos were profoundly  appreciated by one 2010 ’Hollywood Lowrider Club – émigré.’  Visibly touched, he confided, paraphrasing, “This representation is so different than anything I ever have seen about the lowrider culture. Typically the references exposed are, projected pejoratively, and seemingly the overriding perceptions lean toward gang participation, violent rivalry, sexism and other negative connotations.” The club member in his new role as leader of his local club, reported:  “These photos really attract my attention and call me to recognise the bounty of beauty resulting from this creative, artful practice of car and culture celebration.” 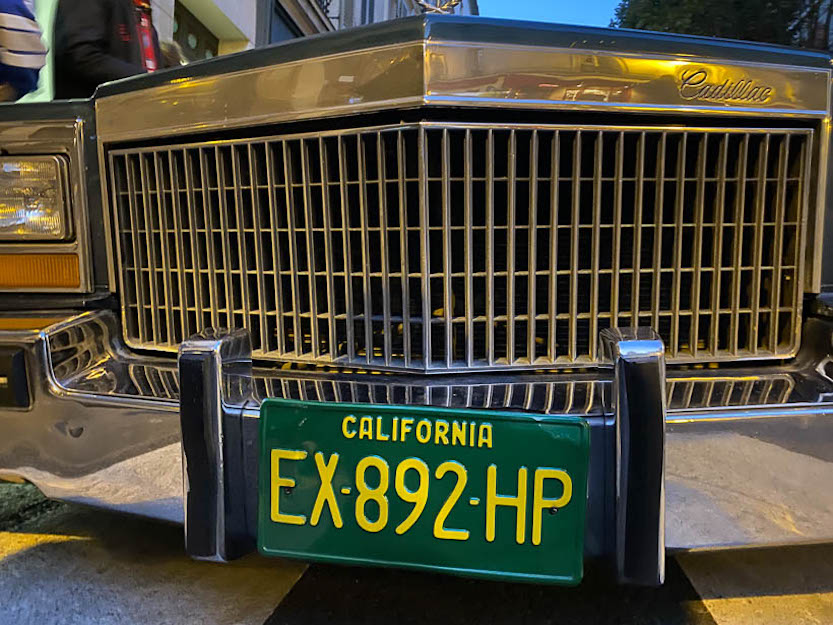 In summary, as photography is one of the most powerful communication tools for humanity to have a look at itself and to learn, it is of meaningful importance to pay attention. Humanism is about learning. Humans are prone to curiosity and therefore are readily available to learn – to keep an open mind and generally be more appreciative of various cultural values, traditions and practices.

I encourage readers to explore further the Polka Galerie’s innovative and significant contribution to the power of photography. Explore the intention to communicate and dedication of the photographers’ contributions to use their work as an informative communications tool – artistically or documentarily. A Paris institution, Polka intends to capture and house the world’s social and cultural change through photography. The galerie is delighted to welcome over 25,000 visitors each year to its Parisian location in the Marais. In my studies, I’ve learned from each of these photographers. I share with you strong esteem and respect for so many I cannot list any and do justice to my feelings. 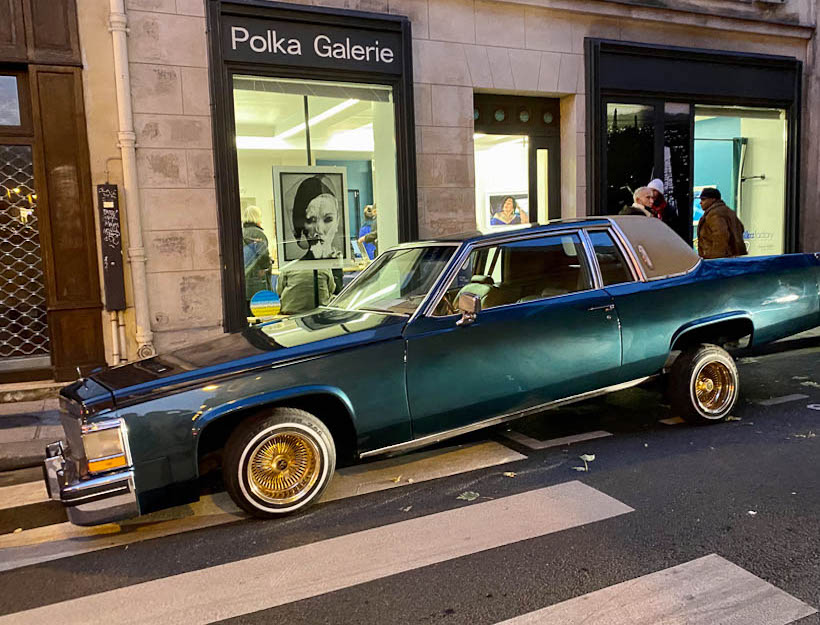