In the Emergency Department, I see chronic illness every day. The majority of my patients over 40 years old have either high blood pressure, high cholesterol, heart disease, or diabetes. People are on multiple medications that I must review with them on every visit. Last year, as part of my thesis research, I began questioning patients with these chronic diseases about dietary advice they received from their doctors regarding how to manage their diseases. Many patients told me “no advice”; some said “low salt” or “low fat”.  I rarely heard someone mention a doctor advising them to try a plant-based diet despite the hundreds of journal articles and books that support such a diet for the prevention and even reversal of many chronic diseases. Dr. Michael Greger’s book How Not to Die  is a rich collection of research proposing that nearly all chronic illness including mental health problems can be prevented or improved with a plant-based diet.

What is a plant-based diet, and why do I recommend it to all my patients, especially those suffering from chronic diseases?

Plant-based means just that: a diet composed mostly of plants such as fruits, vegetables, nuts, seeds, whole grains, and legumes. Plant based diets are naturally low in fat, high in antioxidants, and high in fiber – three critical keys for optimal health. The Mediterranean Diet, vegetarian, and vegan diets are all “plant-based” because they limit or eliminate animal meats and/or dairy and eggs. For a plant-based diet to be healthy, it should also be composed of whole foods. A diet of French fries and energy bars might be plant-based but not rich in nutrients!

There are hundreds of studies proving the benefits of a whole food, plant-based diet. The most well-known is the Adventist Health Study, composed of 34,192 adults over a span of 14 years, which showed that vegetarians have lower rates of heart disease, high blood pressure, diabetes, and “death from all causes”. In fact, the closer one eats to a purely plant-based diet (vegan), the lower your risk is of diabetes which is a major risk factor for heart disease, kidney failure, and stroke. One of my favorite pilot studies is documented in a book called The Engine 2 Diet. Fire chief Rip Esselstyn put 13 firefighters and 2 civilians on a plant-based diet for 28 days which dropped participants’ total cholesterol by 30%, and “bad” cholesterol (LDL) by 40% as well as causing weight loss of on average 14 pounds per person in just 28 days! High cholesterol and obesity are major risk factors for cardiovascular disease. The power of a plant-based diet is truly incredible and life-saving!

Dr. Caldwell Esselstyn of the Cleveland Clinic wrote an amazing book about his research on the benefits of low-fat, vegan diets on cardiovascular disease (the number one killer of all genders in the USA). In his book Prevent and Reverse Heart Disease (2007), he demonstrated with PET scans that blood flow could be significantly increased in the heart muscle in just 3-12 weeks on his plant-based diet! Coronary angiography also demonstrated reversal of coronary artery stenosis (the major cause of chest pain and eventual heart attack) in 32-60 months on his plant-based diet. Avoiding invasive coronary artery stents or open heart surgery could be a powerful motivator to switch to a plant-based diet.

I have recently learned about another reason to decrease consumption of animal products. When gut bacteria are exposed to high and frequent intake of choline, L-carnitine, betaine, taurine, and lecithin (found primarily in animal meats, fish, and byproducts such as eggs and dairy), the bacteria create a metabolite called TMAO (trimethylamine-N-oxide). High levels of this compound in the body are linked to increased risk of cardiovascular disease, stroke, diabetes, kidney disease, and certain cancers.

Proponents of meat-heavy diets such as Paleo and Ketogenic diets often use the argument that ancient human cultures lived on high meat diets and were healthier than our modern counterparts. There are several flaws to this argument, however. First of all, humans from primitive cultures often died in middle age from infectious disease or injury before chronic disease from diet set in. There is actually evidence from ancient Egypt showing signs of cardiovascular disease in the mummies of affluent Egyptians who ate high fat diets with more animal proteins compared to their poorer countrymen. We must also note that modern humans are much more sedentary than our historic ancestors who spent the majority of their day performing manual labor for survival. This may have played a protective role in preventing chronic disease despite a diet high in saturated animal fats. Finally, animal agriculture today creates animal proteins that are higher in fat, heavy metals, and hormone/pesticide residue than meats and animal byproducts eaten by ancient cultures. Animals raised in the past lived in pastures, eating grass and insects uncontaminated by toxic soil or acid rain and were not fed foods meant to artificially increase their muscle mass or milk production. Chickens are a good example of the change in animal protein nutrition; a typical store-bought chicken today has 10x more fat in its flesh than chickens produced a century ago. Animals bred for meat, milk, and eggs today are fed diets high in the inflammatory Omega-6 fats which then make their meat, milk and eggs high in Omega 6 too. Since inflammation is the root cause of heart disease and many cancers, Dr. David Servan-Schreiber postulated in his book Anticancer: A New Way of Life that limiting intake of animal foods is a powerful protectant against cancer. He survived almost 20 years after diagnosis of a brain tumor by following his own dietary and lifestyle advice.

Why would doctors be reluctant to advise a diet that has demonstrated improvement, prevention, and even reversal of these major diseases? Is it because doctors are ignorant of the research? Do they think this diet to be too drastic or difficult for patients to follow? Is there a conflict in interest in which cardiologists would prefer to perform expensive heart stents and open heart surgeries instead of empowering their patients to utilize dietary and lifestyle changes to heal themselves? It may be a combination of all of the above. As patients, we must make the best decisions for our own bodies. Do we want quick fixes (medications and procedures) that provide short term symptom improvement but come with risks and side effects? Or do we want healing and improved quality of life into our old age? When I see nursing home patients that are on 20 different medications to manage a list full of chronic diseases and they are still bed-ridden and suffering, I know that quick fixes are not the answer.

The answer is simple: a plant-based diet, active lifestyle, and avoiding toxins (particularly smoking). During my career, I have lost four medical colleagues, all in their prime, to sudden heart attacks. Two of them smoked cigarettes and all of them ate the standard American diet high in animal products and processed foods. In my 25 years in Emergency Medicine, I have never taken care of a vegan having a heart attack. I might also add that all of the adult patients I have treated for “choking” were eating meat.

Switching to a plant-based diet can sound overwhelming, but it doesn’t have to be. A healthy dinner can be as simple as steamed brown rice, roasted vegetables, and spiced-up legumes. If you want fancier meals, there are a plethora of recipes online and cookbooks available. Your change can be gradual or sudden. You may find yourself in the kitchen more often preparing your plant-based meals but your health is worth it!

Here is my cheat sheet for getting started:

1). Get yourself some plant-based cookbooks and recipes. My favorite websites for recipes are from Forks Over Knives and Game Changers. Two books that are educational and provide recipes are the above mentioned The Engine 2 Diet and Prevent and Reverse Heart Disease, both available on Amazon.

2). Make a meal plan for the week using these recipes. Write down the ingredients you will need for breakfasts, lunches, dinners, and snacks for one week.

3). Go shopping at a store that provides a good variety of plant-based options such as Trader Joes or Whole Foods. Make sure to stock up on spices and herbs which really bring to life even a simple meal.

4). While putting away your groceries, throw away or donate any animal-based or high fat processed foods that you no longer want in your diet. I do keep a supply of avocado, olive oil, and coconut oil in my pantry for occasional use when cooking. In moderation, avocado and olive oil provide healthy monounsaturated fats, and coconut oil can substitute for butter in baking recipes.

It is interesting that the very foods that are making us sick also make the Earth sick. Animal agriculture is one of the major contributors to water pollution, soil degradation, greenhouse gas emissions, and deforestation. A sick planet in turn makes us sick. Let’s stop the vicious cycle by intentionally choosing a plant-based diet that fosters the health of our bodies and our home. 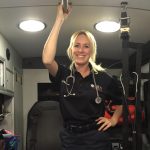 When she isn't hiking northern California's redwood coasts, or cooking delicious vegetarian meals, Eden works as an Emergency Department RN and further specializes in holistic health, plant-based nutrition, and essential oils. She started Nurse In the Kitchen as a facebook page to reconnect medicine with nutrition, and assist her patients in preventing and treating disease with natural methods. Her articles feature holistic health tips and alerts, DIY remedies and recipes, and nursing wisdom from years of bedside patient care.