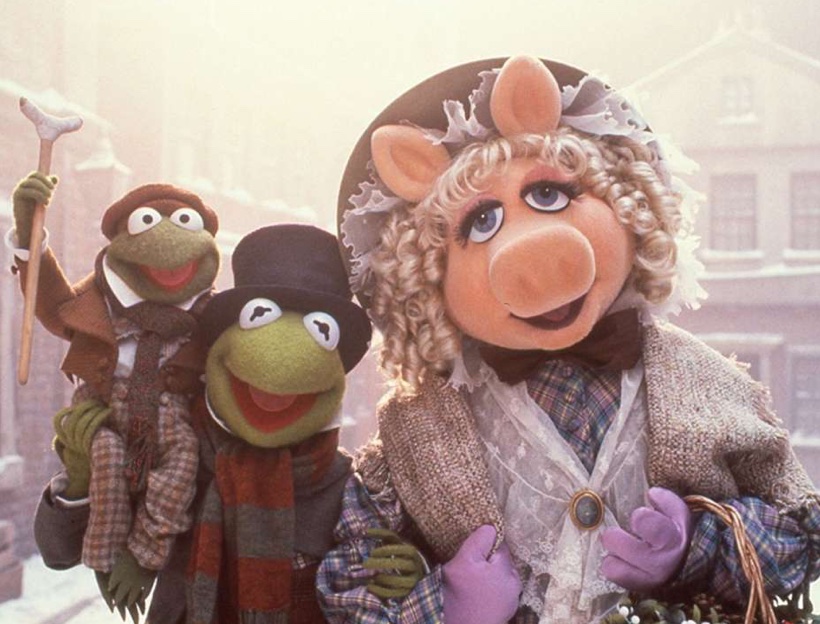 Whenever the month of December rolls around, nothing gets me in the Christmas spirit quite like watching The Muppet Christmas Carol. The charming characters, engaging storytelling and heartfelt songs make this my favorite Christmas movie by far. While at first glance it might seem that mixing Muppets and Christmas together is nothing but a cash-grab on the part of those involved, The Muppet Christmas Carol silences all skeptics with its excellent acting and deep respect for the original source material. I certainly can’t claim to be impartial when it comes to reviewing this film, but I hope that I can evoke some of the wonder and excitement I feel every time I watch The Muppet Christmas Carol for those reading this review. 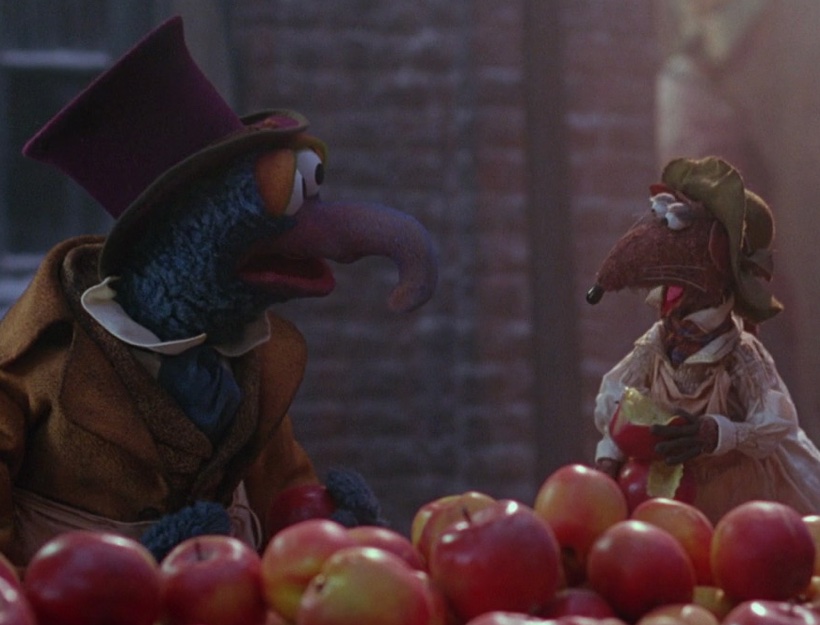 The Muppet Christmas Carol opens on the streets of London in the mid-1800s, moving quickly to focus in on our narrator, “Charles Dickens” (a.k.a. Gonzo) and his snarky sidekick Rizzo the Rat. This odd pair provide some of the funniest dialogue and slapstick humor throughout the entire film, creating several hilariously memorable scenes. They serve as a mirror of the audience themselves, placing the viewers directly into the story and preventing the film from ever having a dull moment.

While the duo mostly serves as comedic relief, Gonzo takes his role as narrator quite seriously and quotes many lines from A Christmas Carol verbatim. The Muppet Christmas Carol does not shy away from the intricacies of the classic story, but rather incorporates them in such a way that adults can appreciate the authenticity of the narrative while children can easily follow along. This is the sort of film that a person of any age can enjoy as there are a variety of jokes incorporated throughout the story that can tickle all sorts of funny bones. 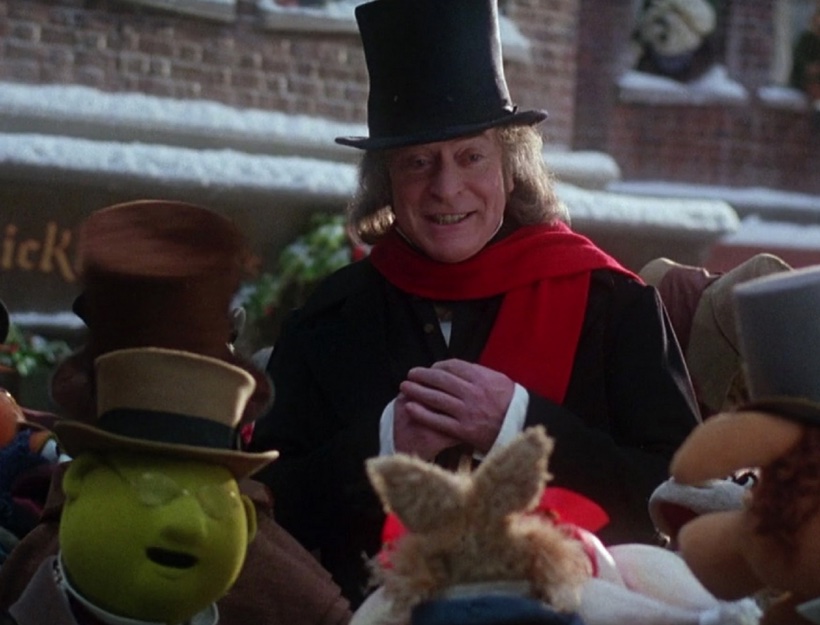 A particularly excellent cast member is the man of the hour himself, Ebenezer Scrooge. Played by Michael Caine, who has given excellent performances in films ranging from the Dark Knight trilogy to Miss Congeniality, Scrooge is depicted with all the apathy and venom one could hope for in this infamous miser. In fact, he even has his own opening number, “Scrooge”, in which all of the Muppets of London get to sing about what a cantankerous old coot he is. You are able to believe that Scrooge is a truly horrible old man, an actual person rather than a clownish caricature.

As the story progresses, we see the full range of Scrooge’s emotional journey as he is transformed into a completely different man overnight. We see his denial and pride when he first meets the Marleys and is warned of his impending doom, his nostalgia and regret at the past scenes the Ghost of Christmas Past presents him, the honest joy he feels as he spends Christmas day with the Ghost of Christmas Present, and finally the grim resignation the Ghost of Christmas Yet to Come brings as Scrooge realizes if he does not change the way he lives his life, he will soon be gone and forgotten. Caine’s dazzling performances makes you empathize with Scrooge as every aspect of his life is turned upside down, and the payoff at the end of the film when we see Scrooge’s redemption is truly touching. 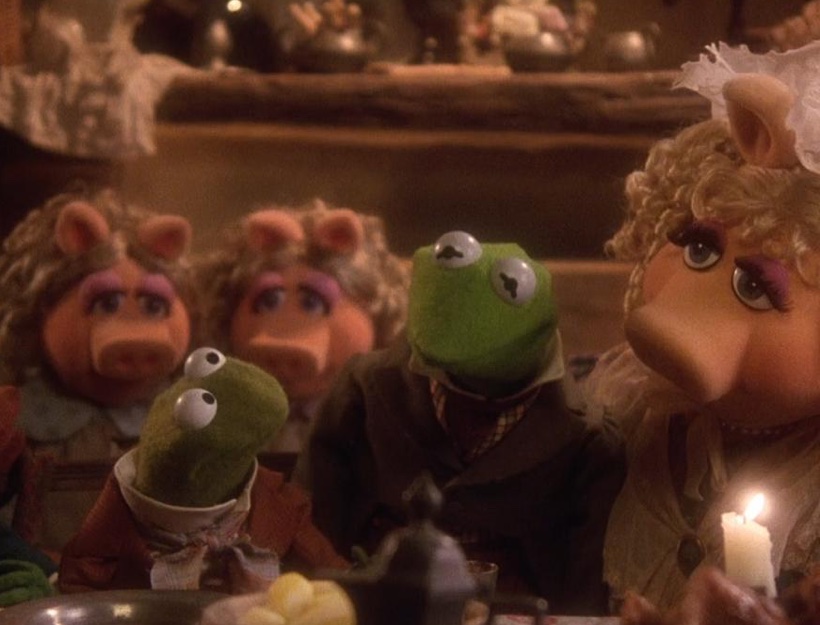 Great acting and excellent storytelling can be found in a variety of retellings of A Christmas Carol. In my opinion, what truly sets The Muppet Christmas Carol above all the rest is its music. One wouldn’t expect a movie that puts frogs and pigs in leading roles to have a particularly impressive soundtrack, but the songs interspersed throughout this film will stick with you long after the credits have rolled across the screen. Numbers such as “One More Sleep ‘Till Christmas” and “Bless Us All” will have you filled to the brim with the warmth of the holiday season, while “It Feels Like Christmas” or “Thankful Heart” perfectly capture the excitement and anticipation of Christmas Day. Every song – no matter the subject – will have you singing along in no time to clever lyrics and upbeat rhythms. The film even has an overture to start everything off, making this a full-fledged musical with recurring motifs and themes that the audience can spot throughout the movie if they listen closely.

I cannot recommend The Muppet Christmas Carol highly enough. It doesn’t matter if you’re young or old, a diehard Muppets fan or a total newbie (I personally never watch anything else Muppets-themed at all). A Christmas Carol is a timeless classic, the story that  saved Christmas, and The Muppet Christmas Carol does an outstanding job of paying tribute to the original while making something truly special that is all its own. If you are looking for a new movie to enjoy this Christmas, pick up your own copy and settle down for a night to remember.
*