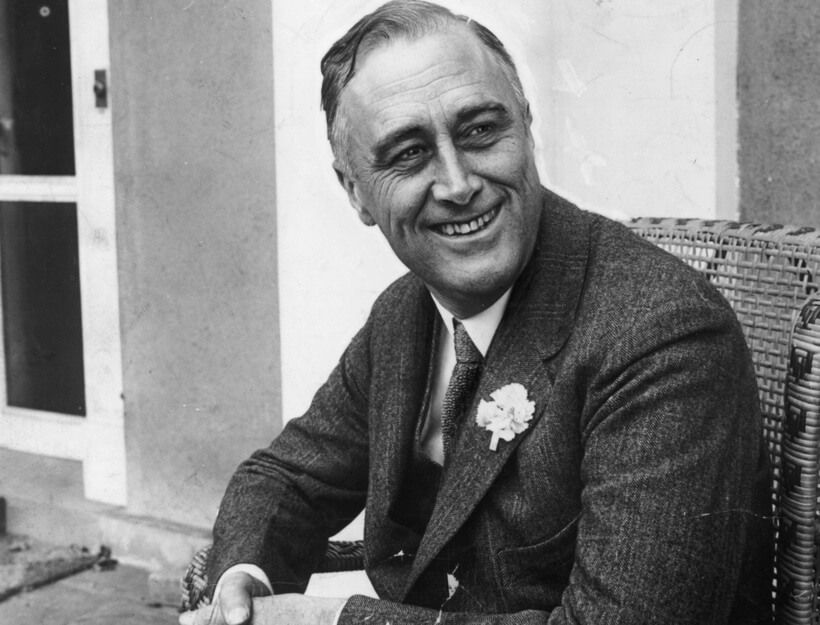 The Wheelchair President marks the second documentary on Netflix I’ve reviewed featuring British narrators speaking on the life on an American president who was well-loved and admired by the people despite his hidden chronic illnesses. There’s a rather odd specificity there, but perhaps it is precisely because FDR and JFK were capable leaders in spite of their personal health struggles that makes them such memorable presidents. There’s something to be said for the wisdom and fortitude that comes with long-suffering, and The Wheelchair President certainly explores this idea.

Franklin Delano Roosevelt is one of America’s best-known presidents. Serving for four terms, he led America through the Great Depression, providing thousands of jobs through his New Deal and inspiring the masses with his timeless inauguration speech where he stated, “The only thing we have to fear is fear itself.” Considering these words were spoken by a man who lived during both world wars, they hold great weight. 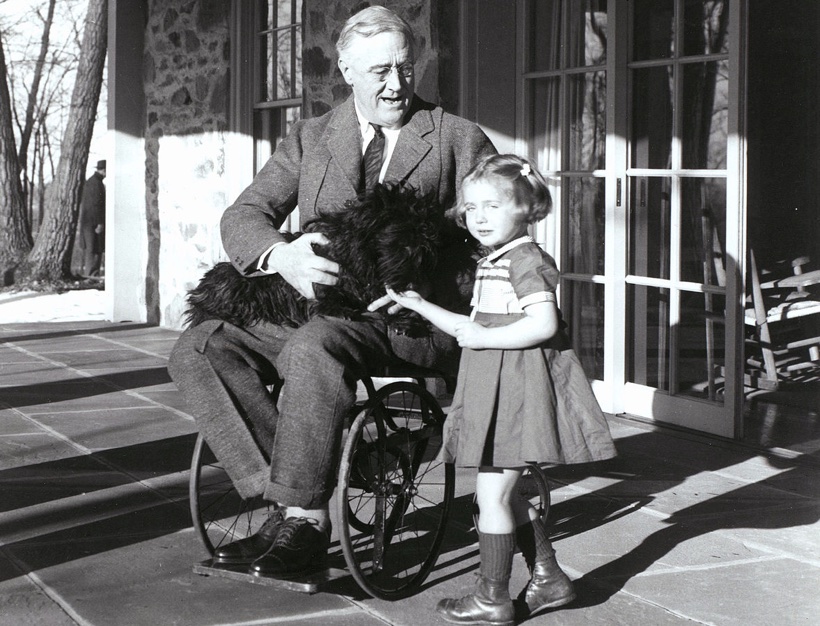 Roosevelt was struck with poliomyelitis at age 39, a disease which left him unable to walk or even stand on his own for the rest of his life. With a promising political career on the horizon, many may have ended up with lives robbed of their full potential before they had truly begun. Roosevelt, however, was determined not to be held back by his poor health. Calling his polio a “childish disease”, Roosevelt refused to assume the role of a cripple, putting wheels on ordinary wooden chairs rather than using a regular wheelchair, and striving to walk the quarter mile to the road while wearing his steel corset and braces that went from his heels to his hips. While he never made it to the road on his own two feet, Roosevelt accomplished much, much more.

In 1924, Roosevelt delivered a half hour election speech for the candidate Al Smith at the Democratic party convention. Walking in on crutches and wearing the braces underneath his clothes to support him, Roosevelt delivered his speech with energy and panache. In 1928, he completed the same feat, but now with a cane. Roosevelt had successfully become, as the narrator puts it, a public walker. His courage and tenacity brought the public’s admiration that led to his landslide victory in the election of 1932.

The documentary skims over the first two terms of Roosevelt’s presidency, acknowledging the positive effects of his New Deal and the social progress it brought about, but not delving into this time in depth. Instead, the bulk of the two 45 minute episodes that comprise the documentary is dedicated to the events of WWII and Roosevelt’s involvement in them. Roosevelt worked for years with both Churchill and Stalin, trying to reach agreements in order to to keep the Allied Powers strong enough to defeat the Axis Alliance. He also strove to quell America’s isolationist tendencies and helped found the United Nations, largely inspired by his predecessor, former president Woodrow Wilson, who dreamed of founding the League of Nations.

The film attempts to show the nuance and moral ambiguity in many of Roosevelt’s decisions. Roosevelt was passionately anti-imperialist in regards to Germany, but failed to see the same imperialist tendencies in Russia and even in the United States itself. He placed great faith in Stalin and acquiesced to many of his demands, including some of his claims to other countries in Eastern Europe. Whether these compromises were the right decision is hard to say. Would the Cold War have erupted even if Roosevelt had lived longer? We will never know. His approval of research regarding the atomic bomb and the fact that he withheld information regarding the bomb from his vice-president Harry Truman is also addressed by the documentary and condemned as “almost criminal”. The Wheelchair President falls on the positive side in regard to Roosevelt most of the time, but they also don’t shy away from bringing up his shortcomings. 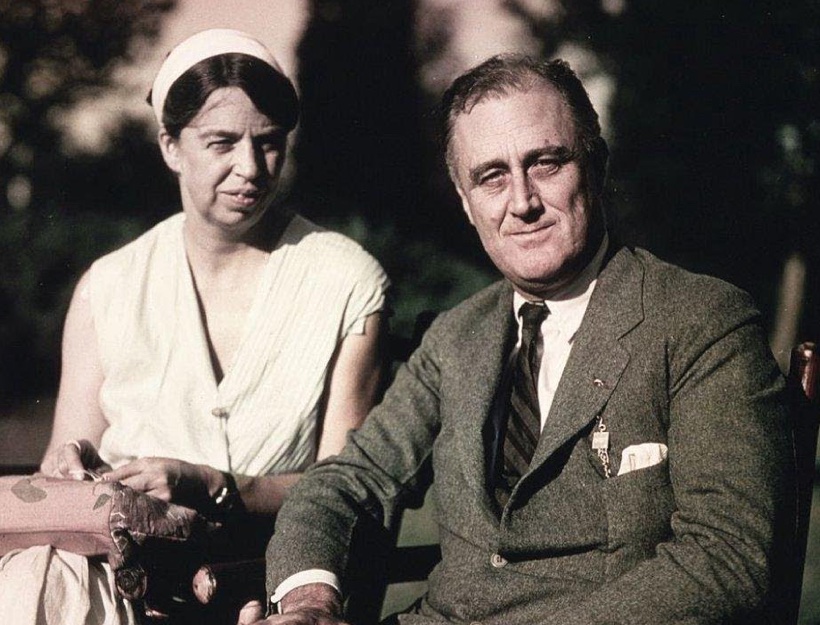 The one area of the documentary that does not hold true to this pattern is the segment on Roosevelt’s marriage. The Wheelchair President has a very “boys will be boys” mentality when it comes to Roosevelt’s affairs, especially the ones later on in his life. His infidelity is written off as a necessity for his mental and emotional health. While the narrator speaks highly of Eleanor Roosevelt’s many accomplishments, he also says she wasn’t “fun” enough for her husband, as if this were a legitimate excuse for him to meet with several women behind her back for years. Anna, the couple’s own daughter, organized her father’s liasons without her mother’s knowledge because, according to the film, she was afraid he would die without this stress relief. Could Roosevelt’s infidelity have lengthened his life? This is another impossible question to answer.

When Roosevelt did pass away suddenly due to heart failure after battling the chronic illness for many years, the film states that through the public’s mourning of their late president Eleanor realized she has “failed to appreciate him” and was at last able to understand her husband’s true greatness and what he meant to America. Since this is juxtaposed directly with Eleanor learning about her husband’s continued infidelity and her daughter’s deceit, the film seems to suggest that she was wrong to hold her husband responsible for his mistreatment of her. Whether this implication was intentional or accidental is uncertain.

All in all, The Wheelchair President is an engaging documentary that remains fascinating from start to finish. There is nothing particularly inflammatory or unusual in the stances it takes, but I wouldn’t expect otherwise from a documentary about such a famous and respected president. I appreciated how the film covered the entirety of Roosevelt’s life from start to finish. There was a great deal I did not know about Roosevelt, and considering his impact on such key events in recent history, it is worthwhile to gain a better understanding of this iconic man. No documentary is able to achieve complete impartiality, so I would certainly advise viewers to hold the stances The Wheelchair President takes on many of Roosevelt’s actions lightly, while researching further. In the end, we are left looking at a man who, despite severe chronic health issues, was able to lead his country through some of the hardest years it has ever faced. He stood as a hero for the people, a symbol of the unquenchable spirit that Americans pride themselves on. In many ways, he was the president that America needed at that time and it seems to me that he deserves to be remembered for his contributions which shaped the world we live in today.
*