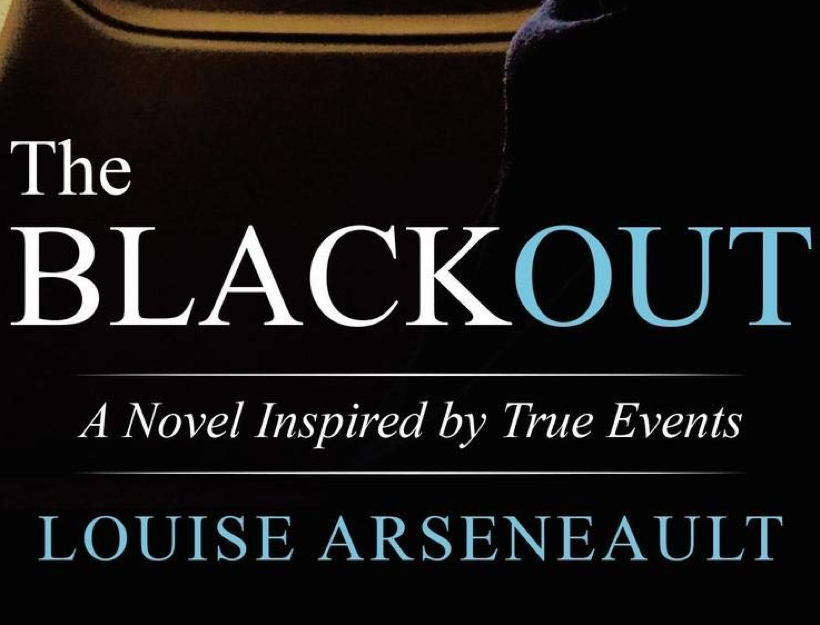 The Blackout: A Novel Inspired by True Events

Louise was fourteen when the Northeast Blackout of 2003, the ninth-largest in the world, affected an estimated 55 million people across Northeastern & Midwestern America and the Canadian province of Ontario.

Lucy Sawyer is a vibrant fourteen-year-old travelling on her own for the first time. With adventure and excitement running through her veins, she braves her unknown: flying. Soaring through the air is everything she expected and more. Suddenly, before her next take-off, all lights go out: a blackout. With no electricity and no familiar face to rely on, Lucy is left to the mercy of fate. However, by trusting strangers, following her instincts, and ignoring fear, Lucy embarks on a life-changing journey of friendship and personal growth.

Louise:  A Gift of ‘Presence’

Author Louise Arseneault is internationally educated, well-travelled, a semi-professional soccer player and an extraordinary coach. She is an exceptionally talented and inspiring young woman whose gifts to give, along with her story, are true gems for life perspectives, joy in life as well as success.

Okay, I am biased. I first knew Louise as my granddaughter’s soccer coach. Within this role she also organised team-building, character-enhancing activities that included the charitable contribution of her team’s time to create nutritious food packages that supported Kids Against Hunger.

She wrote her book by committing herself to write 500 words per day. She truly wants to see anyone who wants to succeed in anything do so. She believes in success, and that anything is possible through choice and devoted attention.

“It’s not what you are that holds you back, it’s what you think you are not.”
― Denis Waitley, The Winner’s Edge

1. What inspired you to write this story of The Blackout?

At the time I began, I had been travelling, and I was playing on a team in Finland. Having time between practices and games, I’d go to the library to read. Since I had read everything in English, I thought this is the time to write the book I always thought I would write; I committed myself to write 500 words per day and I did it.

I think it is the other way around. Travelling and experiencing other cultures have enriched my coaching skills. I have learned to meet people where they are; to work with differences as assets and not against differences as something to change. This is especially important in coaching children – the ability to meet them where they are creates a safe place, a sense of security from which to build community. The sense of community serves the essence of being a team: expanding understanding, developing overall tolerance, and evolving abilities to relate.

The women’s World Cup is a great example of what can happen when you grow skills and become better. And yes, I believe my book refers to much more than an event, sport or a game. It applies more broadly to life.  Life is progressive. Everyone wants to learn and to grow in whichever ways suit them. It is natural to want to learn and to become more self-assessing, self-satisfied… to become better. I am using the book in speaking engagements to inspire youth.

Attitudes are a composite and are formed as a combination of how you think, what you feel and how you act. I think my book provides situations that can be used to think about lessons in attitudes: perhaps to overcome social conditioning, values instilled by others. Whatever your focus, that is what you see more of – perspectives include at least two sides of every story.

6. What is the message of your story The Blackout? And what would you like people to feel, no matter their age, as an optimal takeaway?

I see the overarching lesson as the power of attitude and how one’s own choice can make things be harder or easier.

Be fearless in the face of rejection – the word no! No is a redirection, not rejection – there is another way. Example: I found 10,000 ways to not create the lightbulb  (#no=redirection≠rejection)

*See Chapter 5 of Bricks in my Suitcase… Attitude changes the conditions.

Lucy Sawyer, an adventurous and atypically mindful girl of fourteen, eagerly boards the plane alone to traverse her country for a summer visit with relatives. The development of Lucy’s self-awareness is gentle and natural. Lucy expresses and dissects a variety of mundane travel-related ‘first experiences’ at a pace that demonstrates Lucy’s attention to time when on her own. While self-time typically is adolescent, mindful…  this was not so much my experience. Lucy observes, introspects and assesses in her naturally attentive style while she clarifies her feelings and builds her own inner security. And, knowing Louise, this is believable.

Interestingly, the environment of security and ‘alone time’ takes shape in the ‘inescapable’ stopping of time that occurs in the confined ‘secure space’ of a jet plane ‘soaring through the air’, traversing the country. It is precisely this confined space that grounds the reader’s connection to Lucy’s personality and sets the stage as the perfect rhythm for the rite of passage in a coming of age ceremony.

A quick and clear read, the strength of this simple yet remarkable story belies the underlying power of the metaphor.

As life itself perpetually advances, every person is confronted with varied and continuous opportunities to evolve. Experiences largely are externally induced, mostly taken for granted, uninvited, or even overwhelmingly unwanted ‘opportunities’, which may provoke strong emotions. Consider a mother allowing her 14-year-old daughter to embark on her first solo air voyage on a 10-hour flight with a stopover and plane change; a young Lucy enjoying a carefree, playful summer vacation with younger cousins; an independent Lucy alone, facing a frightening societal crisis in the form of a national and international blackout, manifesting for her in the midst of air travel just hours before her scheduled arrival to return home to her parents.

Presence, as well as the now popular focus on practising ‘mindfulness’, essentially means attention to feeling. As I read the story, I felt strongly that this would be an interesting book for a family to read together. In addition, it could be especially eye/heart-opening in a family with adolescents coming of age, or perhaps even better for slightly younger children as adolescents are at the precise stage of sorting things out for themselves. I am an optimist. Thinking back, I believe teachers may have more influence.

The Power of Attitude, Focus, and Choice

Every life incident offers two perspectives at minimum, and therein immediately presents the opportunity to consciously exercise the power of choice. The options for mindfulness/presence in each moment are the greatest unspoken, typically untaught, and yet consistently available allies.

Thank you, Dr Wayne Dyer – I offer these well-stated citations, along with photos from my first and most recent visit to Cyprus, that capture for me the overarching feeling of salient lessons in The Blackout: 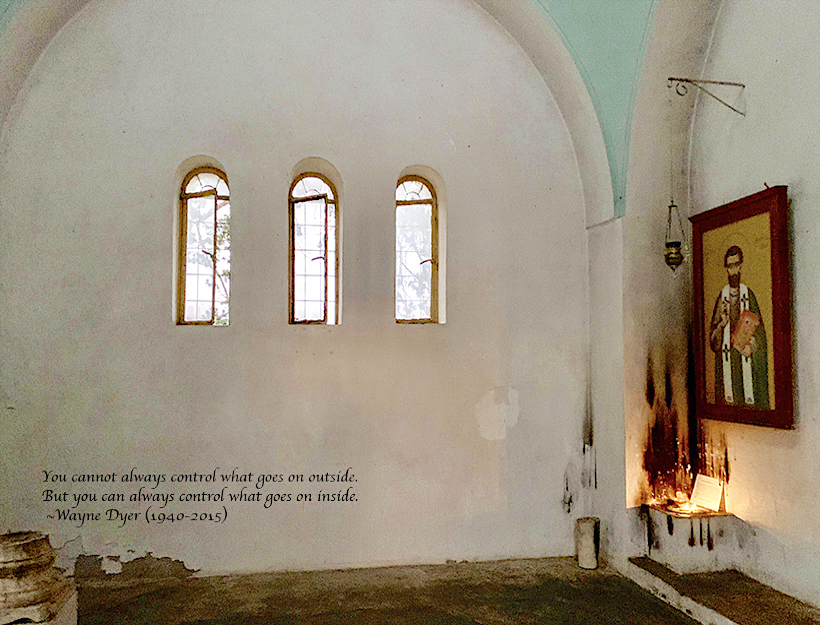 The Republic of Cyprus, in which Nicosia is noted as the last capital city in the world with a border dividing its residents. In Northern Cyprus, this already 400 yr old Tomb of Saint Barnabas was discovered in 480 AD. 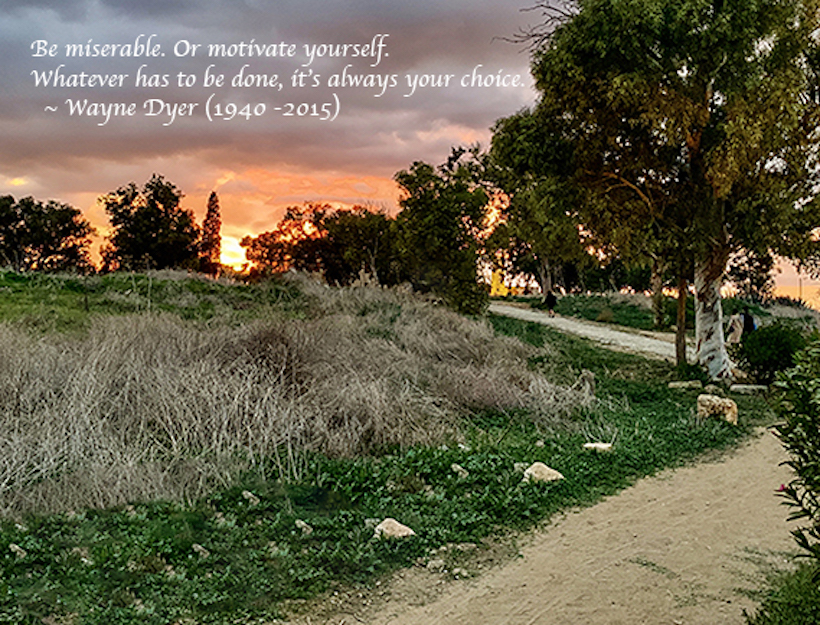 Monastery of Saint Barnabas in the evening of the first weekend of Advent: four buses of Greek Orthodox pilgrims joined us in the tomb and sang. It was quite crowded. The night is falling, it is going to rain! Or stunning sunset colours are inspiring, and a magical crowd in song enlightened my experience of this historical monument! 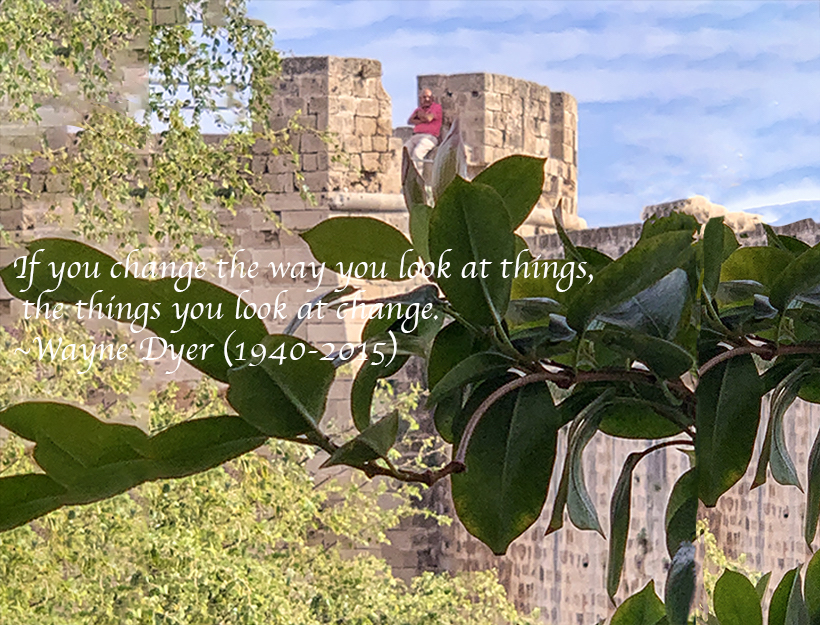 These imposing ramparts, over 15 meters high and up to 8 meters thick, surrounded by a now-waterless moat, define the Old Town Famagusta, Northern Cyprus. Constructed by the Venetians in the early 16th century, they failed to keep the Ottomans at bay in 1571.

Walls may keep you out or not, or even lift you to a new perspective! Try it!

Read The Blackout, A Novel Based on True Events. Enjoy it. Give it to some ‘ados’ (adolescents)!