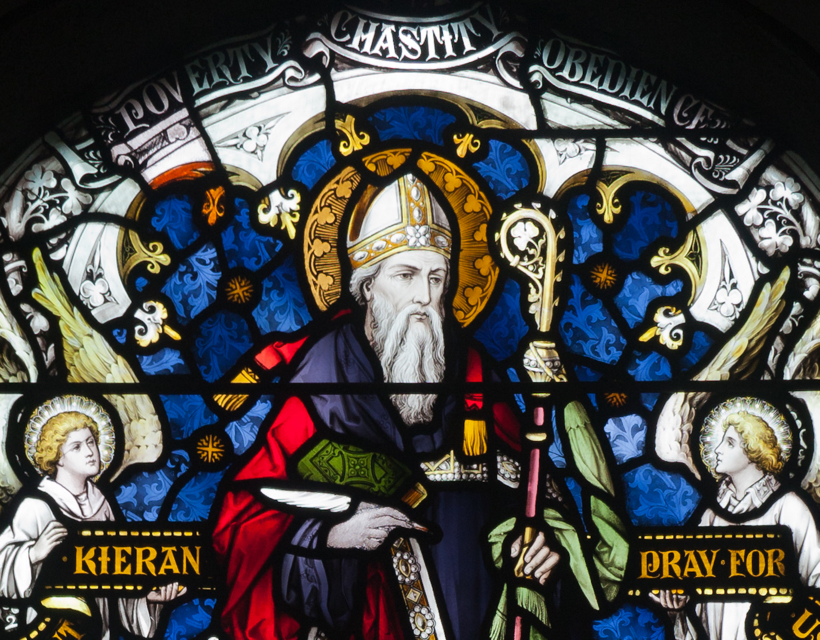 The Irish Saint Ciaran is remembered as the founder of Clonmacnoise, one of the greatest monasteries in Ireland. He is also numbered among the Twelve Apostles of Ireland. This group of 6th century monks studied under Saint Finnian at the famous school at Clonard Abbey in County Meath. Later, each played an important role in spreading the Christian gospel in Ireland and beyond.

Ciaran was born in the hamlet of Fuerty where Saint Patrick’s disciple, Justus the Deacon, had established a monastery. He was one of eight children of a carpenter father from County Antrim and a mother from Kerry. It was Justice who baptized Ciaran and provided his earliest education.

Devout at an early age, Ciaran pursued his call to become a monk by studying under Saint Finnian at his famous school at Clonard Abbey. Among his schoolmates were Saint Colmcille who would establish the monastery at Iona, Saint Brendan the Navigator, Saint Mobi, and Saint Kevin who would one day found the monastery at Glendalough. Amongst this illustrious company of saints, Ciaran earned a reputation for his piety and intellectual brilliance.

When Ciaran arrived at Finnian’s school, it is said that he brought a cow who provided milk and cheese for the entire student body. As a student, Ciaran was described as happy, generous, and gentle. He was a serious student who diligently applied himself to his studies. He apparently became Finnian’s prize student and was asked to fill in as a substitute teacher when Finnian was called away.

Upon completing 7 years of study at Clonard, Ciaran traveled to the western coast to study under Saint Enda on the Aran Islands. Ciaran was reputed to practice extreme asceticism during these formative years by daily engaging in manual labor, sleeping on the bare ground with a stone pillow, and by wearing scratchy cloth next to his skin.

After Ciaran was ordained, he set off with 12 companions to preach the Gospel and plant monasteries. Their first stop was Saint Senan’s monastery at the mouth of the Shannon River. From there, they traveled upriver to Hare Island in Lough Ree where Ciaran established his first monastery. After 3 years, Ciaran along with 7 other monks traveled further up the Shannon to Cluain-moccu-Nois where they are reported to have met Diarmuid O’Carroll, an exiled prince. Diarmuid aided the monks in building the first small church, the seedling of what would one day become the vast monastic city of Clonmacnoise.

Tragedy struck the small community of monks during their first year at Cluain-moccu-Nois. When a plague of yellow fever spread through the land, Ciaran became one of its victems. His classmate and Anam Cara (soul-friend), Saint Kevin, was called to his bedside. An early biography states that the sick man asked to be carried to the tiny church where he had so often prayed. His ravished body was laid upon the cowhide of his long dead milk cow. After Kevin served communion to his dying friend, it is said that Ciaran spoke a blessing over his fellow monks before he breathed his last. Saint Ciaran is believed to have died on September 9, 549 AD in his early thirties. His remains were buried in a corner of the church, except for one of his hands which was kept as a relic to its saintly founder along with the cowhide upon which he died.

When Diarmuid O’Carroll became the next High King of Tara, he supported Ciaran’s companions in their efforts to continue the work of the monastery. Saint Columba visited the monastery in 575 AD to pay his respects to his former schoolmate. It gradually grew and flourished students, scholars, and pilgrims. Pilgrims came to pray at the grave of the young saint and some came to touch the ‘sacred cow’ as Ciaran’s cowhide was called, which they believed held healing powers.

By 800 AD the memory of Saint Ciaran was very much alive. On his saint day, Sept. 9, the Shannon would be busy with river traffic of those coming to honor the saint. The tradition continues. On the first Sunday of September, Clonmacnoise hosts an annual celebration of Ciaran’s life, his devotion to God, and the global impact of the monastery at Clonmacnoise due to the obedient act of faith of one young man.

It gradually flourished into a religious, educational, and cultural center, becoming the second most important monastic city in the land and earning the title Ciaran’s City Fair. Clonmacnoise stands as the oldest recorded pilgrimage site in Ireland, a tradition that has continued for 1500 years. Clonmacnoise continues to attract pilgrims and tourists alike to gaze at its monuments, hear its fascinating story, and to pray.