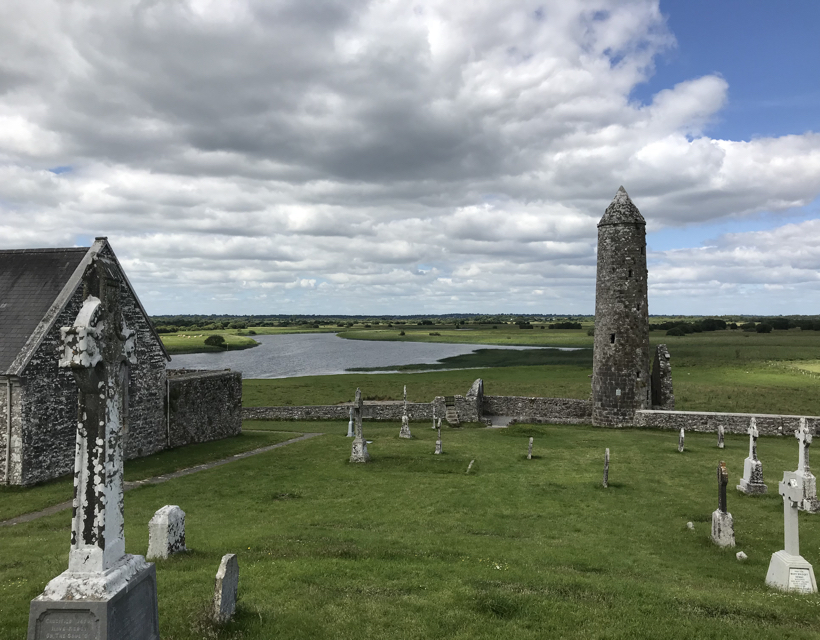 “In a quiet water’d land…stands Saint Kieran’s city fair;
And the warriors of Erin in their famous generations
Slumber there.”

Along the banks of the Shannon River, the ruins of Clonmacnoise stand as silent witness to a once thriving monastic city, ‘Ciaran’s City Fair.’ Founded between 544 and 549 AD, Clonmacnoise became one of the leading monasteries in Ireland, a center of trade, learning, and the arts. Viking raids, marauding tribes, fire, Norman Knights and English soldiers threatened to obliterate the monastery on nearly 50 occasions. Yet, a remnant of the former grandeur of Ciaran’s City Fair remains containing one of the richest collections of ancient monuments from the Golden Age of Irish Christianity.

A young monk named Ciaran or Kieran wisely chose to build his monastery at Cluain-moccu-noism (water meadows of the sons of Nos.) This was the crossroads of old Ireland’s two major transportation thoroughfares, the Shannon River and the East-West Highway. The monastery began as a small wooden church built by Ciaran and  7 comrades for worshipping the High King of Heaven. Within that first year, the church sadly served as the burial ground for Ciaran as well. 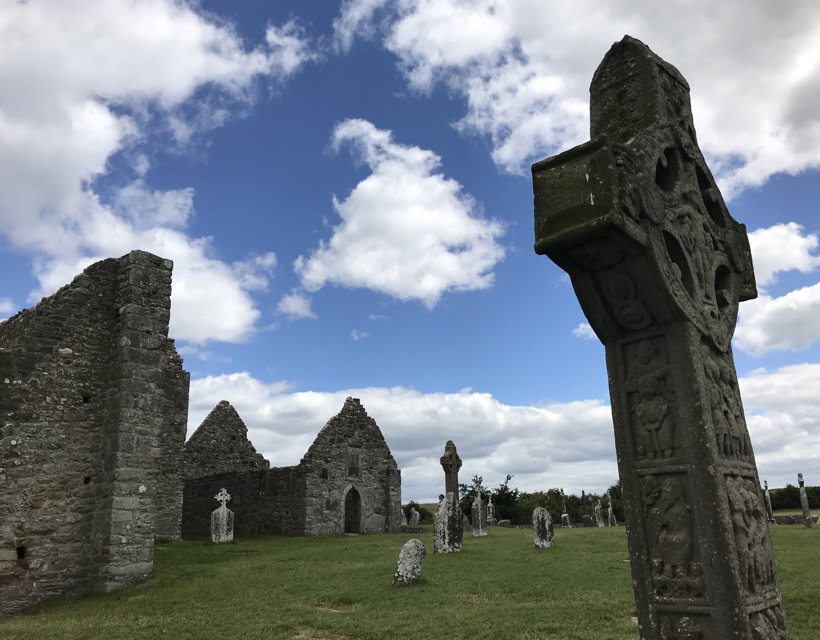 During the 6th and 7th century, Clonmacnoise preserved the memory of its founder by dedicating the church as his shrine. Here, in Teampull Chiarain (Church of Ciaran), the relics of the Saint were displayed, one of his hands and the cowhide upon which he died. Due to its contact with the dying saint, the cowhide was thought to be imbued with power to heal drawing pilgrims to the shrine as early as 606 AD.  Thus, Clonmacnoise became the oldest recorded pilgrimage site in Ireland. 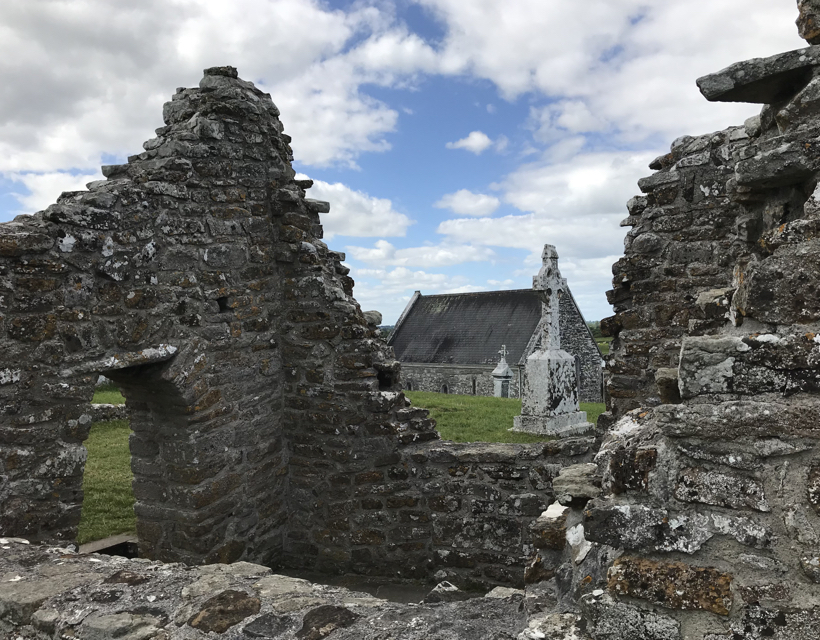 Ciaran’s death left the fledgling monastery without a leader. As the saint was not a native of the district nor of noble birth, his fellow monks were free to choose an abbot for his character and piety. This independence provided Clonmacnoise with a long line of able and godly abbots. Under their guidance, Clonmacnoise developed into the island’s foremost educational establishment drawing scholars from home and abroad. As the number of students swelled, additional churches and dormitories were erected. The monastery also enjoyed a close alliance with the local nobility who supported its work. For generations it served as the royal burying ground for the Kings of Connacht and Tara. 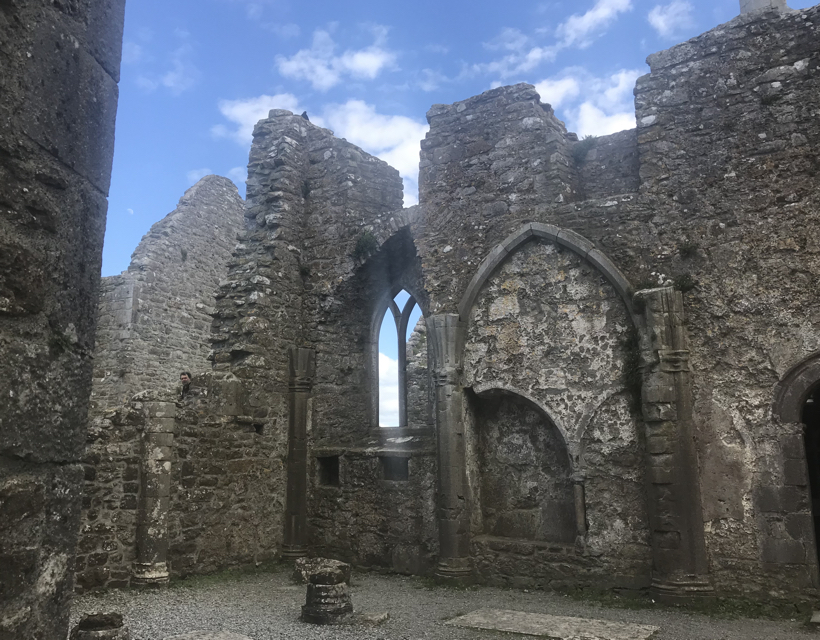 Celtic Art flourished at Clonmacnoise during the Middle Ages. A Scriptorium was added to the monastic complex in the 8th century. Here monks copied old manuscripts embellishing them with intricate designs called illuminations. These text were added to their expanding library that housed both sacred and secular works preserving some of Ireland’s early myths and legends. Two of the these ancient manuscripts survive, The Book of the Dun Cow and the Annals of Tigernach.

Gold and silver smiths, and metal workers were drawn to Clonmacnoise where they designed reliquaries to house the relics of saints. The Crosier of the Bishops, ornately decorated in gold and silver displayed in the National Museum of Dublin, was made by Clonmacnoise craftsmen. 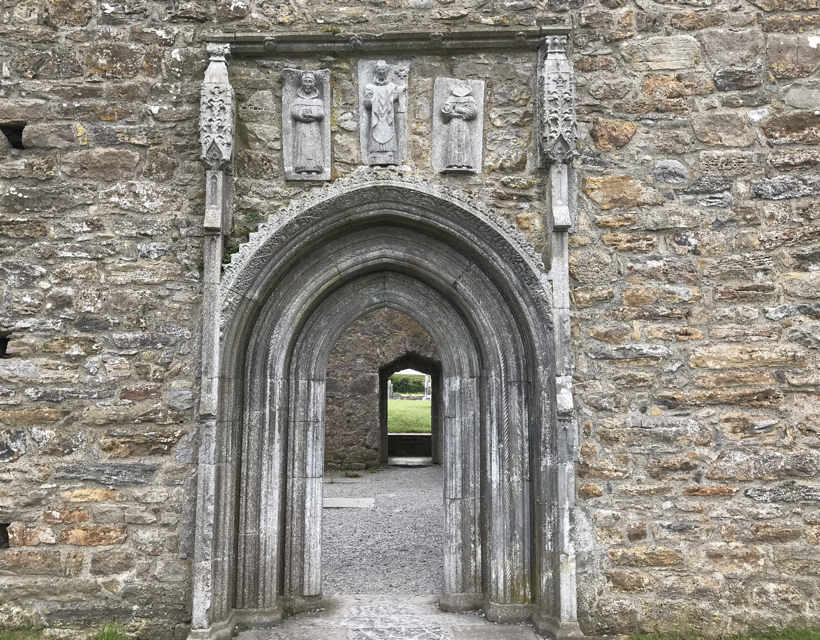 The first of seven Viking attacks fell upon the monastery in 745 AD. Treasures were looted, monks slaughtered and buildings set ablaze. The Viking scourge gave birth to an architectural shift from wooden to sturdier structures made of stone. The Cathedral church was begun in 909 AD, one of the 17 churches that once stood within the monastic enclosure. 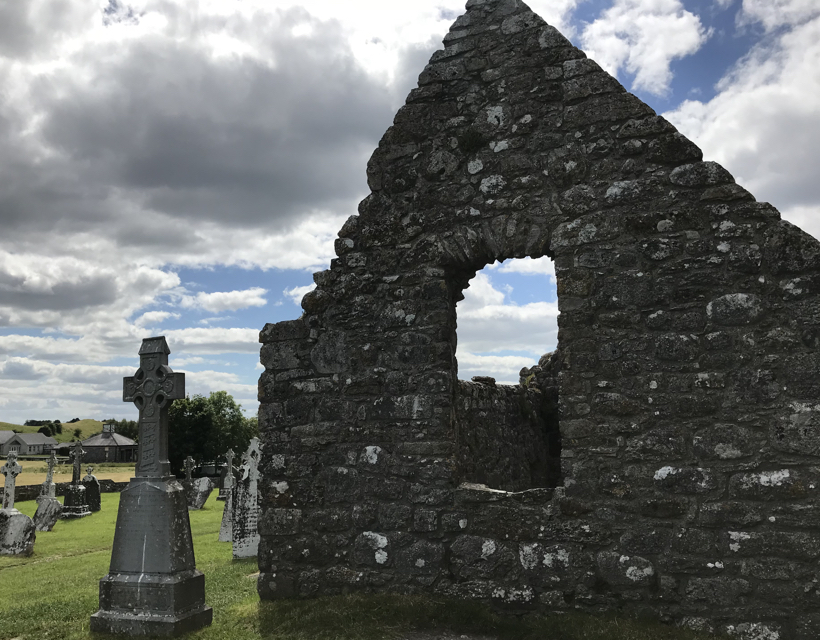 Stone High Crosses were erected during and 9th century, some like the Cross of the Scriptures displayed Bible scenes carved upon its sandstone facade while others were decorated with complex vine patterns. Due to its popularity as a burial grounds, Clonmacnoise stone workers manufactured hundreds of gravestones and smaller stone cross slabs which pilgrims carried home as souvenirs.

By the 11th century, Ciaran’s City Fair sprawled across 80 square acres. Monastery buildings formed the stone hub of a wheel encircled by the wooden dwellings and shops of a large lay population of approximately 2000. Some archeologists believe that Clonmacnoise was in fact, Ireland’s first city. 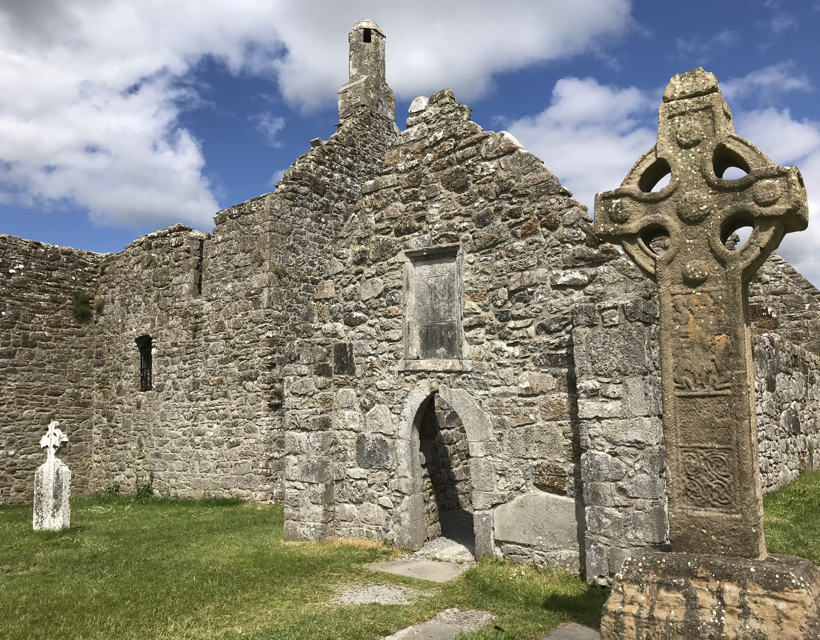 The monastery’s role as Ireland’s primary religious, economic and educational center began to wan in the next century. The city of Athlone, 10 miles upriver, became the new center for trade drawing lay workers and tradesmen to its greener pastures. A shift in the religious climate replaced the Celtic Monasteries with those established by other orders such as the Benedictines ruled by bishops of the Roman church. By the 13th century, Clonmacnoise was in decline. Its final demise came in 1552 AD when English soldiers pillaged and destroyed the monastery site leaving behind the ruins that can be seen today.

Clonmacnoise Monastic Site is not easily accessible by highway nor public transportation. Located in the center of the island and surrounded by farms makes driving to this site challenging. However, soaking in the tranquility of the place while walking among the treasures there, make a visit to Clonmacnoise well worth the effort. The monuments that remain from the monastery’s Golden Age include 2 round towers, 3 high crosses, the foundations of the cathedral and that of 7 other churches. Temple Ciaran, the church that once housed the bones and relics of the monastery’s founding saint, is the smallest of these. Old gravestones pepper the grounds. A 17th century church still in use and a modern graveyard can be found among the ruins. 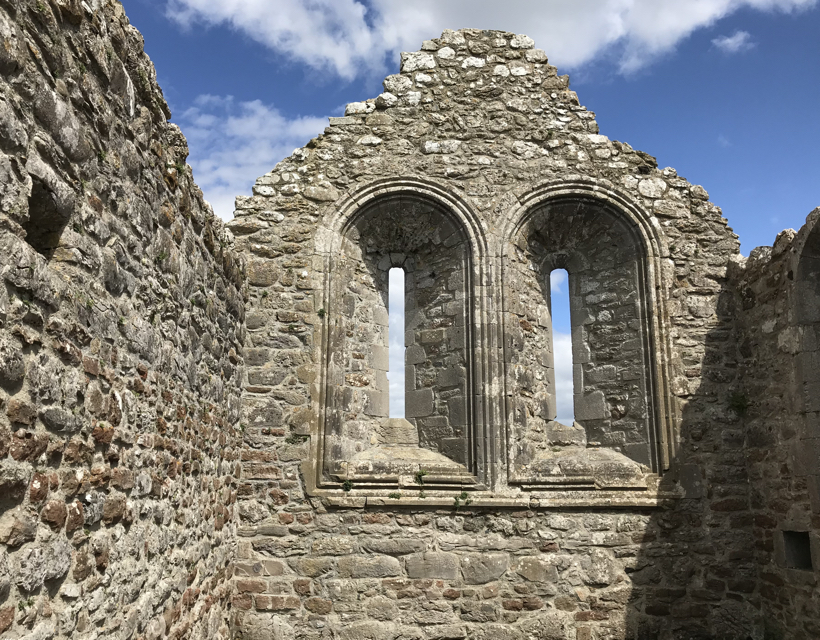 The Clonmacnoise Visitor Center provides a 20 minute video that tells the monastery’s story. On display in the museum are the original high crosses, grave slabs, and various artifacts discovered by archeologists on the monastery grounds. Display cases and informative posters reveal key developments and events occurring during the long history of the monastery. Watching the video and viewing the museum exhibits provide valuable context for a walking tour of the outdoor site. Bathrooms, a gift shop, and tea room are also available.