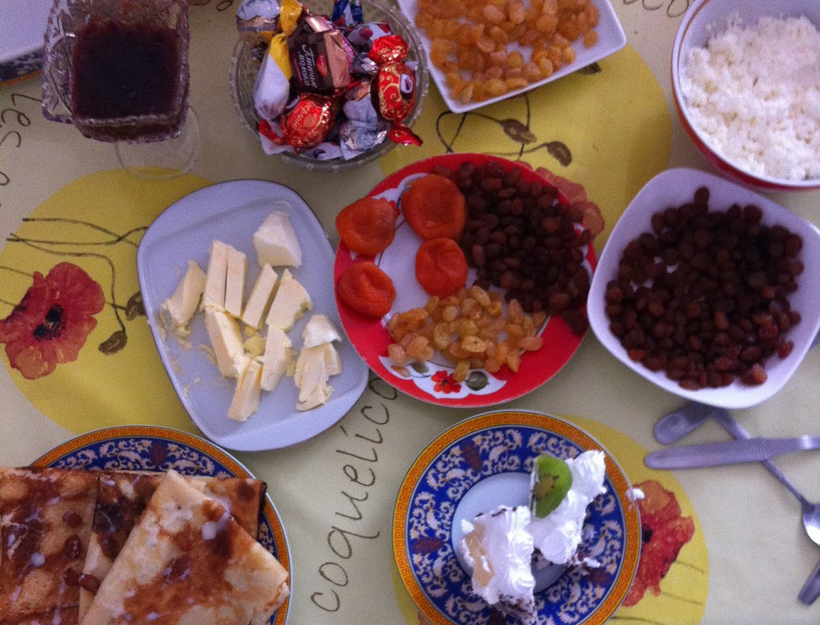 If you asked me what one outstanding characteristic of Central Asian culture is, I would tell you: hospitality.

This does not mean they always spend huge amounts of money to serve their guests the finest of meals or have elaborately decorated  homes with expensive furniture or carpets.  They do that sometimes.  What I have found everywhere I have gone in these lands are people with open doors to friends and strangers alike.  Whether they are poor or rich or in between, they always offer the best of what they have after graciously inviting you into their homes.

I remember a surprise visit to my language tutor’s simple apartment.  She quickly invited me in and sat me in the honored seat.  That is with my back to the wall, facing the door.  Next she reached under the coffee table and pulled out little plates of walnuts, raisins and other tasty nibbles.  She left me for a few minutes and prepared tea.  Then she disappeared again, only to return to refresh my small bowl of tea.  She never asked why I had come or what she could do for me.  She just continually served me food and drink until it was time to go.   Time to go meant after I had eaten a large bowl of homemade pasta she prepared for me after she served the tea! I was there for over an hour before she sat down with me to hear the reason why I had come.  I think it was just to arrange our class hours that week.

This scene replayed many times over whenever we visited friends, neighbors and co-workers.  These were the 1980’s before phones were common and people popped in to each other’s home regularly unannounced.  We were told that it was an honor to be visited. Guests were sent from God, especially if they arrived at meal times. Now most people have phones and cell phones, but this kind of hospitality is still very common.

I tried to match this hospitality, but found it impossible.  I did my best to invite friends and strangers in when they came, never to stand at the door until they told me why they had come.  I would put out little plates of goodies, but sometimes realized I was out of them!  My attempts at making homemade pasta failed miserably. The noodles were meant to be long and thin like spaghetti.  We affectionately called my noodles “fat noodles”.  Definitely not for consumption by guests!  After awhile, I tended to serve rice based dishes. One time I, feeling quite noble, gave the best to the guest in the form of Jell-O.  My mother had sent it to us in a package all the way from home.  It took several months to reach us.  Our guests pushed it around their plates for a while.  One of them bravely asked: “What exactly is this?”  We couldn’t exactly tell them.  That was enough to let them know it was not really safe for eating, perhaps just a decoration.

Now we find it very difficult to leave anyone standing at the door.   More than once, I have found my husband inviting strangers in and offering them a hot cup of tea to warm them up before they moved on to the next house.  I am a bit more cautious than that, but I need to usher friends and neighbors in to sit down and at least have something to drink.  Then I will rummage around the pantry and find some little yummy bits to put in dishes for them to sample.

I have learned from my Central Asian neighbors and friends that hospitality is not about having the house be in perfect order, or having the best tasting foods.  It is about making people feel comfortable and welcome in my home. It is about honoring them with my time and attention and receiving their visit as a gift and honor to me.
*