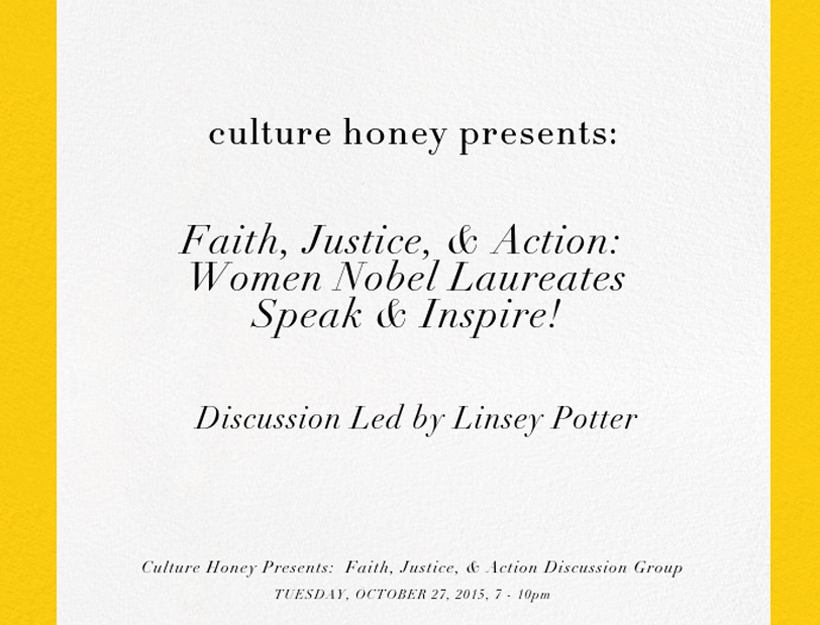 With Linsey Potter as our special guest, a small group of women gathered in Pasadena two weeks ago to view and discuss recent interviews with Nobel Prize winning women Mairead Maguire, Leymah Gbowee, and Shirin Ebadi.  The interviews were powerful in the way that each woman was able to tell the story about how she effected change in her own context, and why she took the actions she did.  Furthering their stories into their current efforts was another touch point for those gathered, recognizing that action on behalf of justice is a life-long effort.

As we discussed the things that affect us each day, our group of modern Pasadena women all agreed on a central point: caring for the homeless and mentally ill on the street is a concern for each of us.  We each encounter the homeless in Pasadena daily, and shared stories of our encounters.  So, what do we do with suffering that is directly in our path?  What does the teaching of Jesus and the Good Samaritan lead us in?  While the answers are not easy, we do draw insight from those that have gone before us as well as those that we are walking life’s path alongside.

Here is a direct resource that impacts the situation in Pasadena, including offering avenues for donating money and time to help those in need.

Here is information about a special unit of the Pasadena Police Department (HOPE = Mental Health’s Homeless Outreach Psychiatric Evaluation) that is organized to help those with mental or homelessness issues in Pasadena:

After speaking at length with a representative of the Pasadena Police HOPE unit, he advised that the best way to participate in compassion for those that are homeless in the Pasadena area is to support Union Station or the Salvation Army.  He made the comment that if we are to interact with someone on the street to do so in a public area.  He also gave a reference for a unique program in Pasadena that offers donation stations in and around Old Town, the “green donation stations”.  These “donation stations” are located throughout Pasadena, such as at places to shop like at Paseo Colorado, and proceeds collected there go directly to Union Station.

Some comments from the women that gathered for the discussion group are as follows:

“I was refreshed and challenged.”

“I believe the fear .. comes from implicit knowledge of challenging “the system”. By that I refer to the broad scope of America’s entire cultural, political and philosophical structure. It’s hard to point out the system as a whole, because it is the very worldview in which we live. All the things that are held to be true by society are intertwined and work together to keep the civilization functioning. Thus when challenging a part of that structure, even a tiny part, it threatens the whole. Culture is constantly changing, but people can’t or don’t want to know that, because they want to see the things that culture has taught them as permanent, unchanging truths. Man is both the product and a producer of culture, but it is not often that a man consciously realizes what he is doing when he steps outside the system and tries to create something new, something better.”

For those that missed the group, a montage video of interviews of the Nobel Winning Women can be accessed on the Culture Honey YouTube channel.  For a copy of the handouts and questions for the night, or to be added to the list for future discussion groups (for those located in the Los Angeles area), email us at:  discuss@culturehoney.com.
*

Stay tuned, the next Culture Honey Presents: Discussion Group is slated for February 2016.  The topic will be Race Relations in America, 2016.