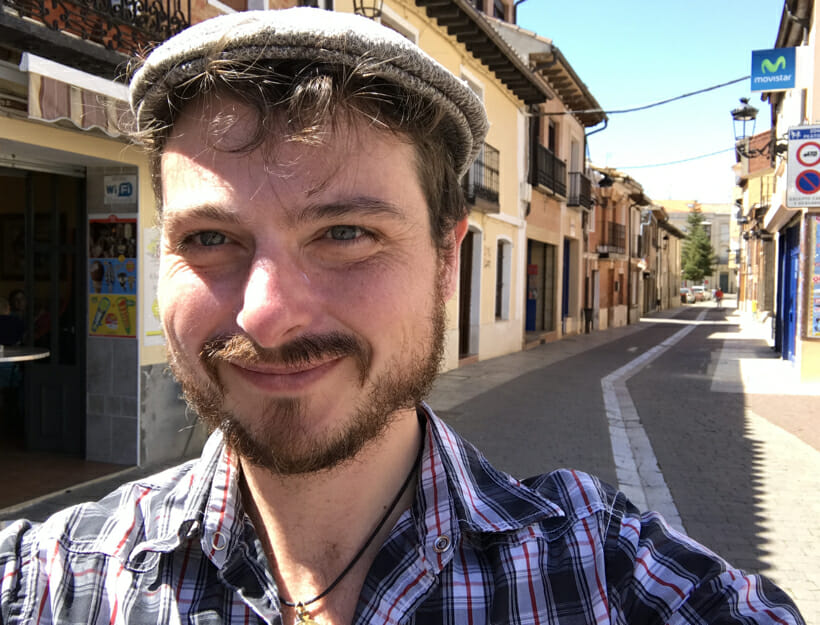 Brian Skillen, Author, “The Way: Through a Field of Stars”

It is often a strange and winding path…

one takes to becoming an author and for Brian John Skillen whose first book The Way: Through a Field of Stars is out now, it was particularly so.

As we sat down to chat across a sometimes-dodgy internet connection – Brian was in the USA and I was in the UK – it was clear from the start that Brian had a story to tell. It was a story that took him from the USA, around Europe, along the Camino de Santiago, and then back and forth between the USA and the Camino a little bit more. It’s called ‘God’s Cocaine’ he tells me, laughing. Once you’ve done the Camino once you want to do it again and again and again.

Starting from the beginning

But I’m getting ahead of myself. Brian is a ballroom dance instructor. As a kid, the discipline of ballroom dancing took him away from a bad life and gave him a tool to do some good. Cut to many years and a bad breakup later and Brian found himself wanting to get away. So he decided to go travelling, teaching dance as he went. It was these travels that took him to the Camino.

Well, technically speaking he had tried it once before but couldn’t finish. He’d hurt his knees on the last day and couldn’t walk into Santiago. So he wanted – needed – to try again.

Trading shoes for a story

Remember how his backpack had everything in it? Well it was too heavy, so he decided to trade some of his gear in for the story. How many of us can say we’ve traded in dance shoes for a story?

“I woke up and my backpack was too heavy. Because I was on a dance tour so I had my laptop in there, my dance shoes, and everything and I’m trekking 500 miles across Spain with it. So I took out my dance shoes and I left them there and I said, ‘I’ll trade these in for a story.’ And every day after that the book played like a movie in my head: the people I met, the things I saw all came together.”

And that was it. From that moment on, the rest of the walk was all research. Pilgrims he met became characters. Sites became settings. He saw more codes and learned more secrets. I could go on – we did, as we chatted – for there are so many aspects to his walk where the stars seemed to align to produce his story, including serendipitously gaining access to a place that only opens one day of the year. But I only have so much space so I’ll move on.

We each have our own Camino

Did I mention Brian is dyslexic? Growing up, Brian tells me, he was misdiagnosed and it wasn’t until years into his education that he ended up focusing on reading and writing. So the idea of writing his own book wasn’t even in his head. Until, of course, the Camino and the realization that somebody had to write this story. Why not him?

For research – and because he was hooked on the “God’s Cocaine” that was the Camino – he went back in 2019 and has since walked over 1000 miles of the pilgrimage (The Proclaimers would be so proud).

It’s an incredible life story and one that lines up perfectly with what the Camino is all about. It’s about being inspired, about self-discovery, about meeting fascinating new people who show you a new perspective. And that’s what the book is all about too. It’s clear from our conversation that Brian is a man on a mission. Ballroom dancing was a tool he used to do good and now this writing is a similar tool.

A new way of thinking

The book is a historical fantasy. It has kings and knights and mysterious evils. But it’s also a reflection of our own trials and how we respond to those trials. It’s an introduction to philosophies and ways of thinking that maybe we haven’t heard before. It’s also a physical push because he wants this book to inspire people to walk their own Camino.

After you’ve read The Way, you cannot walk the Camino without seeing all the codes and the mysteries of the Knights Templar. I won’t say too much here because I don’t want to spoil any enjoyment from the book. All I will say are two things. Firstly, most of us know little of the Knights Templar and mainly know of the crusades whereas in fact they were significantly more complex, having had their own system of governance and banking and so much more. Secondly, the codes and the doors and the symbols in the book are all on the Camino. You can see them… Ok, so I haven’t walked the Camino myself and can’t say I’ve seen them but Brian has, and he’s done a great deal of research too.

What the future holds

There is two and a half years of research packed into this book – and the series as a whole – far more than can be talked about in this article. So I will stop here, saying only that this book is one of three. Books two and three continue the journey, diving deeper into the mystery and bringing in new ideas. I’ve been told some of these plans, some of the character arcs and plot points. But I won’t say anything. Instead I’ll just let you stew, knowing it’s going to be good.

While the second in the series doesn’t have an official release date as of yet, book one was released on October 13th of this year to commemorate the sudden disappearance of the Knights Templar on October 13th all those years ago – the 1300s.

So if all goes to plan, book two of the series will release in 2021 on October 13th.

And that, in a nutshell, is Brian John Skillen, author of The Way: Through a Field of Stars.

For now, if you would like to purchase Brian’s book, AND support an independent magazine like ours, you can order your own copy here!