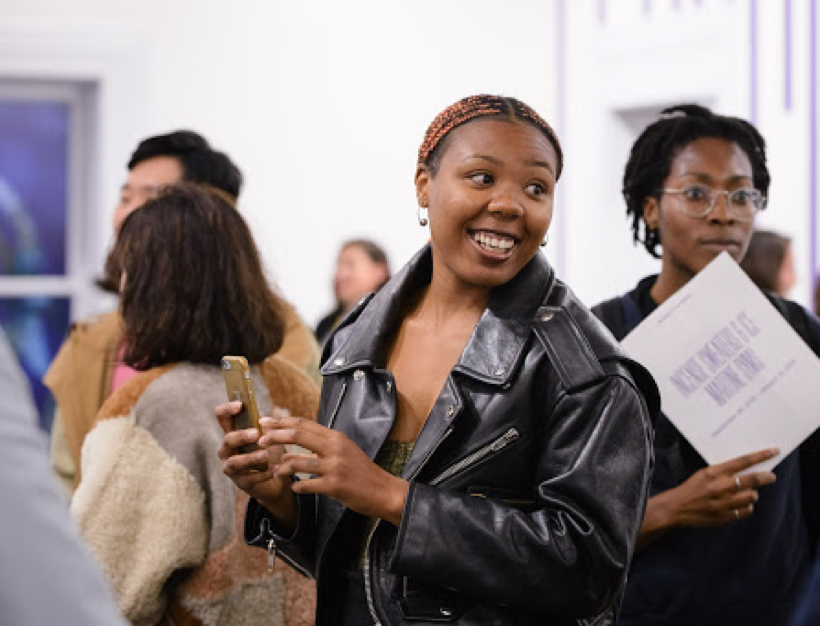 Set in the shadows of the San Gabriel Mountains, Altadena is the place to go in Los Angeles County if you want amazing hiking and nature walks like the famous Eaton Canyon trail. It has a number of stunning cultural hotspots like Christmas Tree Lane and the Cobb Estate. And it even has – last time I was there – a lovely little pool hall just off Lake Avenue.

It also happens to be the old home of Martine Syms, the artist that we at Culture Honey are currently obsessing over.

I say old home because she now – as far as I’m aware – spends her time between Los Angeles, New York, and sometimes London so whether or not Altadena is still her home is a question only she can answer.

If you’ve read any of our reviews of her exhibitions, you know we love Martine’s ability to combine the physical space of the gallery with her digital exhibitions. Truly an artist of the modern digital world, she manages to balance the constant digital push of the art world with the physical tangibility of the world around us. Our current worlds are equal parts physical and digital and Martine Syms is able to create art that mimics this reality. In all her work you can see this parallel as she plays with the notion of what is real.

Martine’s work is known for its ability to force a perspective change in the viewer. One of her past exhibitions, Project 106, made the viewer physically move in a particular fashion in order to experience the exhibition. Her newest work, Ugly Plymouths, currently being exhibited in London, doesn’t require physical relocation but does demand the viewer to choose their perspective if they want to fully experience what is going on around them. Make sure to check out our review of Ugly Plymouths to find out more.

Inspiration comes in all forms

Martine pulls from a variety of factors in her quest for artistic truth. The great migration, seeing the vast majority of America’s black population move from the South to the North in the mid-1900s, is one such inspiration, as is the blaxploitation film genre. Afrofuturism is another, much earlier inspiration – check out her Mundane Afrofuturist Manifesto from 2013 here!

But inspiration isn’t enough. You need an outlet. And being a digital artist with a background that also includes graphic design, Martine is well-versed in a variety of disciplines and her impressive list of achievements shows it. She has also produced several movies and worked with major corporations to produce their ad campaigns as well. Her films have been exhibited around the world. She has lectured at institutions such as Yale University, the California Institute of the Arts, MoMa, and more. She’s been awarded the 2018 Graham Foundation Fellowship for Advanced Studies in the Fine Arts, as well as the Future Fields Commission in time-based media from the Philadelphia Museum of Art.

And she’s the founder of the publishing company Dominica Publishing. Need I go on?

She calls herself a ‘conceptual entrepreneur’ and has sought to create for herself a sustainable future as an artist. It seems oxymoronic, but many modern artists like Syms are turning their back against the old idea that art and financial independence don’t mix. Why can’t the artist be true to themselves while filling a market niche?

Personal branding is part of art, as is the creation of one’s own style and character. Unlike those who believe art to be separate from the world of business, individuals such as Syms understand that in order to be financially stable and successful you need an economic model. What’s more, the conceptual entrepreneur idea, the idea of the artist as a sustainable institution, fits into the current global economy and allows the artist a freedom to pursue their own interests, unchained by financial burden.

Home is where the art is

Featured throughout Martine’s work is her family and friends, popping up constantly in her films and exhibitions. She seeks to portray life – specifically her life – her identity as a black artist in America, and the truest form of such a production is through the use of one’s own friends and family. Not only that, but often her work is produced on basic equipment. Her films, especially her latest exhibition film Ugly Plymouths, are not big budget productions. The three eight-minute films of Ugly Plymouths were shot on an iPhone, I’m told. They were then digitally translated to be playable on bigger screens. They don’t use tripods and stabilisers. They aren’t fancy.

But they are true and they are honest. As an artist, Martine seeks to portray life. Her life and the way she shoots, edits, and publishes her work is important. Don’t expect Hollywood-level CGI is what I’m saying. Life imitates art. Life is art.

Just go check her out already

I could go on about Martine Syms and the reasons why we love her. There is much to say pertaining to her skill. But I will save you from further gushing. All I’ll say is that if you ever get the chance to see her work or hear her talk, don’t skip out. She’s been in the game for years now and her success is building. Unfortunately, you can’t say you knew her before she was cool because she’s already cool. But at least you can get familiar with Martine Syms’ work as you watch her go from strength to strength.