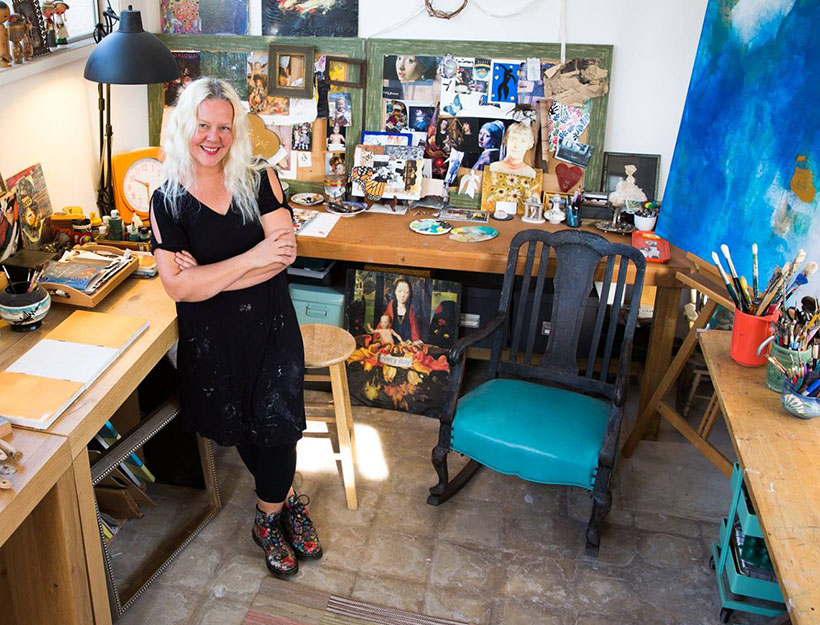 Once Upon a Time in New York City

It all began in New York City, where every good story should. In and amongst the thriving art scene of New York, Kari Kroll lived. She had just finishing studying Illustration at the School of Visual Arts and was now off to work for The New Yorker. At university she specialised in the creation of collages and it was for this that The New Yorker hired her. Her career as an editorial illustrator had begun.

Here Kari loved and here Kari thrived, working not only with the New Yorker, but also on book jackets, CD covers, and other renowned magazines like Entertainment Weekly and the Washington Post.

Kari had grown up on Long Island and had visited the city every chance she got. She remembered soaking up the art museums and letting herself be inspired by the work of artists past and present alike.

It was her dream to live in New York. So why would she ever leave?

It was simple happenstance that led to Kari meeting the man who would be her husband. He wasn’t a New Yorker, only there because business had taken him there (he owned a record label and one of his bands was playing in the city).

Despite his not being a New Yorker, it was love at first sight. A year later she was married and with that came a move to Los Angeles.

With family in New York she still made the journey back several times a year, but now it was time to start a new chapter in her life. A chapter set in L.A.

It was a question diverging from the discussion of her past, but it was one I had to ask. As far as the art scene goes, how do the cities compare?

“My heart still remains with the museums in New York just because so much of my learning and formative art years happened in all of the great museums in New York City. But we’re equally blessed here in Los Angeles to have fantastic art and culture.”

In fact, she tells me the contemporary art scene in Los Angeles is especially vibrant right now. Downtown is booming with new artists and studios and galleries. And many people are actually moving from New York to be here.

While neither is necessarily better (she makes sure to inform me) the art scene in Los Angeles is growing very strong indeed.

Ok, back to the matter at hand. It is clear when talking to Kari that timing has played a big part in the shaping of her career. At around the turn of the century, the field of illustration was changing. Everything was becoming digital and the once niche focus that Kari helped pioneer was no longer so niche.

Also at around the turn of the century, Kari and her husband had begun to have a family. She continued to work as an illustrator, but when her second child got very sick and when her next child was in fact twins, Kari’s focus moved from illustration to raising her family. She still created and she still produced, but she no longer sought out commissions and only took those that came to her.

She had a choice to make, but it was an easy one. It was “very natural, organic. I’m stopping [illustrating]. I’ll revisit it again once my kids are older,” she told me as we discussed the changing world of illustration.

But she didn’t stop completely. Kari made sure to incorporate art into her family life, sometimes producing work for the church she attended, sometimes for her children’s schools. Art was her life and as she adapted to her new life, so did her art.

“The Revisit Has Been Reimagined”

Eventually, all four of Kari’s children grew up and her time was freed up to work on her art.

But the illustration scene had changed so much. Kari was a physical artist, not a digital one.
Then one day about two years ago her sister called her and said she needed paintings for her luxury home staging business in New York. Would Kari be interested?

As with many artists, being multidisciplinary is second nature and while Kari hadn’t been a professional painter, she had always loved to paint.

“The second I started painting on those big canvases I was like ‘Wow, this is it! This is was I’ve been looking for.’ I became at that point like a painting machine. I couldn’t stop because I was finding so much joy and energy doing it. The revisit has been reimagined into painting.”

Kari, who had been Instagramming her work with her sister, returned to find herself a popular painter. People had seen her work and now they wanted her to work with them. Her painting had taken over her illustration and she now found herself working as a painter in the world of interior design.

“It was all driven by Instagram. If I didn’t have Instagram, I’m not really sure where I’d be at right now. It has been an incredibly important tool for me.”

Being forced – ‘forced’ – by her husband to take a social media class didn’t hurt; she laughed as she recounted the journey towards becoming a first-class Instagrammer.

Talking with Kari, her passion for local art is clear to see: a passion for real, tangible, touchable art.

“So much is available of cheaply printed artwork. You can go anywhere and buy a print. And there is nothing wrong with that, but there is so much great, beautiful artwork being handmade by real, living people. Why would you go to the HomeGoods store and buy a print when you could find an artist in your city who can do a commission for you of exactly what you’re envisioning?”

But how does one go about searching for local artists?

Instagram, Kari answered when I asked that exact question. While there are millions of artists on Instagram and the prospect of finding anyone local on such an international forum can be daunting, the simple addition of including in your search the hashtag of your city can produce surprising results. It only takes a bit of research. Many of her close artist friends she originally discovered from Instagram searches.

If Instagram isn’t your thing, try looking at local galleries and art fairs. Go outside and get hunting.

“It’s amazing how many local artists there are out there who would love to do a piece of art for you.”

And as far as cost goes, you’ll be surprised, Kari tells me, of what you can actually afford.

Art for every home. That’s Kari’s dream. And it’s one she is actively seeking to make a reality.