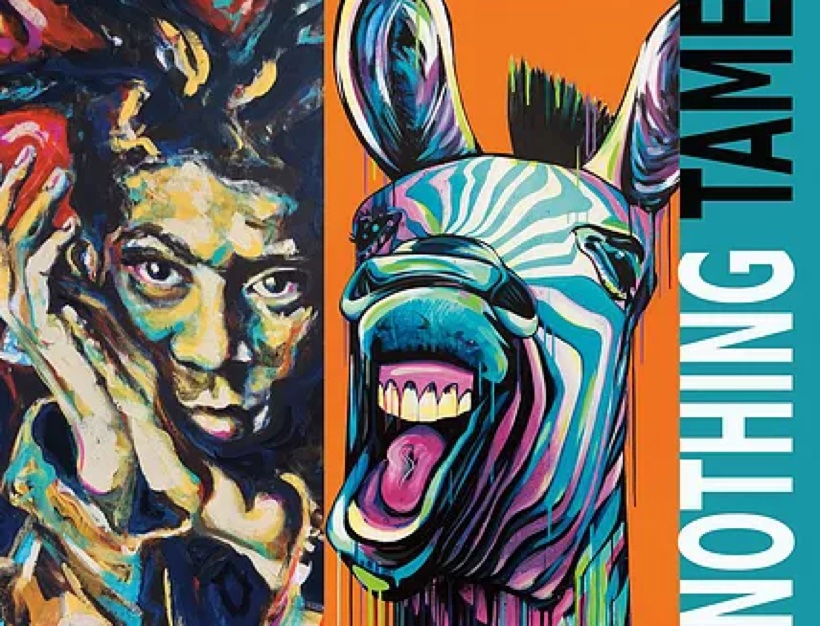 Keystone Art Space cordially invites you to the opening of the dynamic two-man show Nothing Tame on Saturday, March 3 from 6 to 11 PM. Artists Gared Luquet and Tim Ellis will both unveil their most recent series of large scale, high-energy paintings.

In Gared Luquet’s LA Zoo series, stunning depictions of wildlife are juxtaposed against vivid backgrounds in an electric world of posterized intensity and imagination.

Tim Ellis pushes the boundaries of color in his bold explorations of form, constructing intense renderings of the visual artists he deems vital and formative, not only in their work, but in their personalities and influence on collective culture. His work is representational yet experimental enough to transcend mere portraiture, becoming a portal to the interior life of each artist.

Culture Honey had the privilege of interviewing both artists about the upcoming exhibition, the inspirations behind it, and a little on their own backgrounds.

Let’s start from the very beginning. Where are each of you from? Where have you been trained for art?

Gared: I am originally from Walnut Creek in the San Francisco Bay Area. I attended Pepperdine University where I was a Studio Art Painting Major and Art History Minor. I credit my evolution as a professional artist to my professors Joe Piasentin and Avery Faulkner who gave me an appreciation for abstract art.

Tim: I grew up in tiny Lancaster Pennsylvania, surrounded by farmland, dairies and Amish, and was fortunate enough to study diverse art in high school under the encouragement of Jim Gallagher, who I still keep in touch with. As I grew as an artist, I felt increasingly alien until I first found the camaraderie of a fine arts community at the Pennsylvania Governor’s School for the Arts at Bucknell University. I  truly came alive as an artist in that bastion of creative energy where I fell in love and met my future wife – all in the the summer before senior year in high school. I studied art at Alfred University in upstate New York, which is renowned for its ceramic art program, where I mainly created large scale figure sculpture. 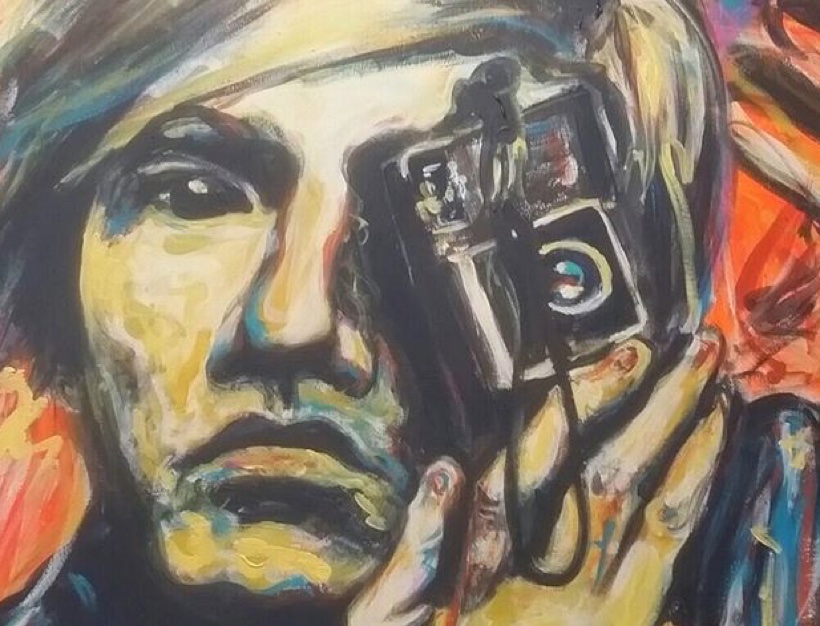 Tell the story of discovering art in yourself – including your influences or defining moments.

Gared: The last six years have been full of twists and turns in the evolution of my current work. I began by creating realistic works early on, which then evolved to completely abstract pieces. My recent body of work represents blending of the styles. Although my current pieces are intent on being realistic, I approach the subject with an abstract frame of mind. I am continuously focused on working loosely and painterly to build layers that look abstract up close, but create a realistic looking animal portrait from afar.

Tim: I have always been a maker. As a child I drew and built things and that evolved into a passion for creating art. I have always loved drawing people. Other subjects interest me, but for me there is an element of spiritual discovery and synergy that comes alive when I capture a likeness. I fell in love with pottery and sculpture in high school and focused on that in college and my early work. I rediscovered painting about five years ago after a few eye surgeries prevented me from the physicality of sculpting. The eye surgeries left me with severely clouded and warped vision in my right eye, which ignited an interest in perception and distortion.

How do you two know each other?

Gared: Tim was a sculpture teacher of 20 years when I began my first year as a high school teacher. Tim went out of his way to mentor me and ultimately pass on the program’s traditions that we still carry on after he left. His enthusiasm, dedication and passion for art and others has made him a lifelong friend of mine.

Tim: Gared and I became fast friends teaching together. I immediately saw his talent for inspiring and training young artists and was super impressed by his ability to teach full-time while maintaining his own painting career. We put together many student shows and worked very easily and productively together. We attended each other’s openings and I was inspired by the power and scale of his paintings. 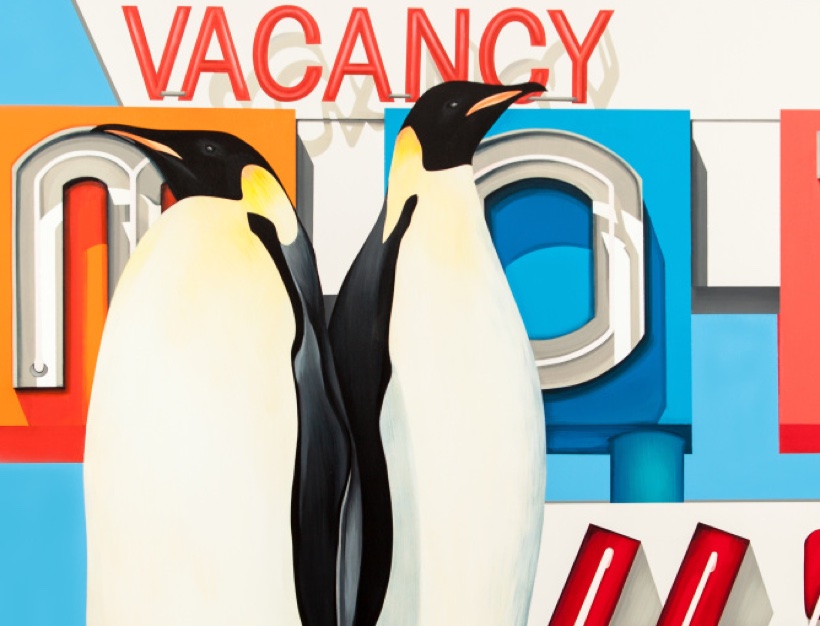 Where did the idea for Nothing Tame come from? How did the gallery come to ask you guys about doing the show or how did the show evolve?

Gared: I think Tim will have a great answer for the title of the show, but to me it’s the essence of the way we approach the art-making process. We both attack paintings and we make bold choices in color as well as in composition. There is nothing tame about our process or in the final product.

Tim: Initially, I thought a title for our show would be difficult. Gared’s wild paintings of animals with urban elements and my paintings of artists who overturned cultural and artistic norms inspired the idea. We threw around some titles and settled on “Nothing Tame” pretty quickly.

Gared: Tim and I talked about doing a show together for a while and about 9 months ago made it a reality by setting a date. The beautiful thing about it is that we never really had a set plan for what we thought the show would look like in the end. There is a lot of trust between us which has allowed us to work freely, knowing that our common work ethic and passion for what we do would make for a great show. 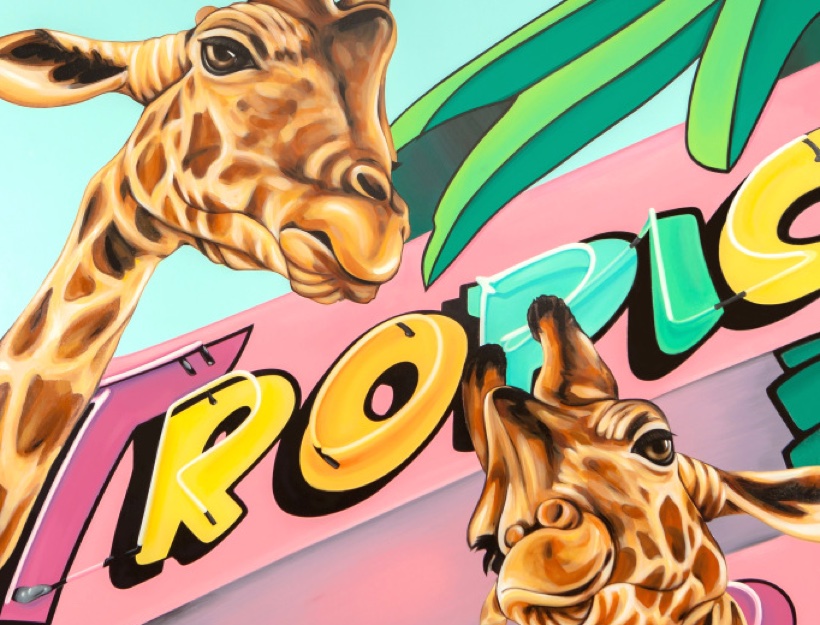 Gared, how did you become involved in doing pieces focusing on animals? Can you give insight into your whimsical yet bold style?

Gared: Four years ago, I began my LA ZOO series and oddly enough animals were not involved. When I moved from the Bay Area, I couldn’t help but see LA as a zoo. This wild place was made up of patchworks of communities, intersecting into this vibrant atmosphere that I loved so much. As I was working to fill my first solo show in LA, I realized that I might not have enough pieces. My first animal was a large scale giraffe and I have never looked back!

Tim, where is your inspiration from to do a series of other artists? How did the color tones and bold strokes come to be the expressed tones/style for these pieces? How would you describe your style?

Tim: I began the series with the Salvador Dali painting. I had just done a large series of paintings that my wife, Donna, had modeled for, and a few self portraits. When I paint, I work very quickly and boldly, searching for the form with big strokes as I focus in with detail. My goal is not portraiture, but a painting which transcends likeness, with a window to the interior life of my subject.

With my vision changes after my retina detachments, my work has become looser and more colorful, mirroring the distortion in my own perception, and I use brighter colors as I explore different palates and color relationships. I think this renewed interest in color relationships began after nearly losing my sight. Light, color and vision have become even more precious and exciting to me. For this series I chose visual artists who are vital and formative, not only in their work, but in their personalities and influence on collective culture. 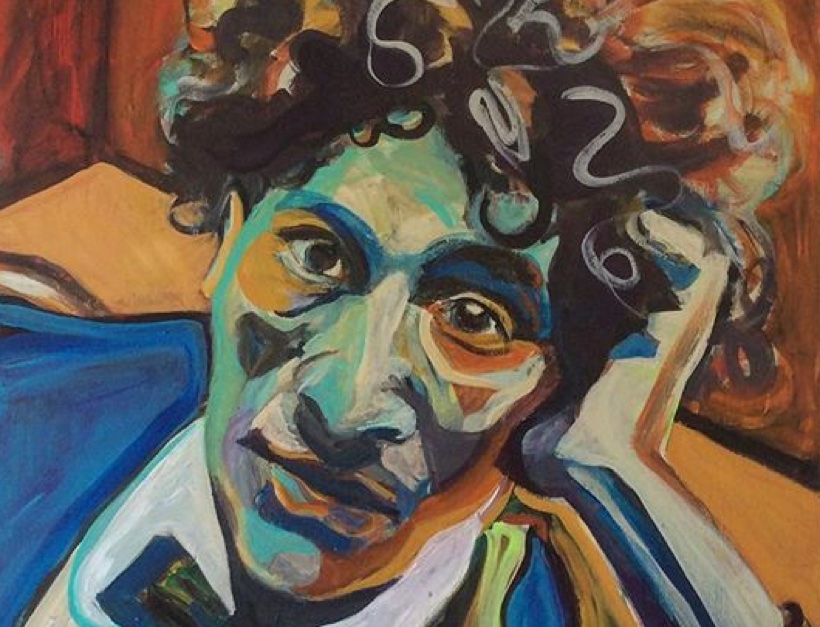 What other shows has your art been featured in?

Gared: In 2014 I had a solo show at Keystone Gallery, the aforementioned LA ZOO, in which I unveiled the beginning work of my animal series.

Tim: I have consistently shown my work throughout my career, mainly sculpture in Los Angeles beginning with the DADA shows in the early 90s. I began showing my paintings two years ago at a local gallery in Pine Mountain Club in a two person show with my wife Donna.

At their upcoming exhibit, Gared will have 11 new pieces, predominately between 3′ to 5′ in size. There will be 10 different numbered editions of paper prints on metallic paper which will sell for $40. He will also have metal prints (high definition images printed on a sleek metal panel) selling for $100. The price range for original paintings is between $1,500-$2,500. For inquiries, email garedluquetart@gmail.com or  contact him through his Instagram @la_zoo_art or website at www.garedluquetart.com.

Tim has painted 23 pieces for this show. Most of the pieces are 32” wide by 48” tall on wood panels. Those pieces are $1500.  He also has some smaller paintings on canvas beginning at $1100. Tim will offer high quality, giclée canvas prints of the pieces on his website and display one full-sized canvas giclée print in the show. The full sized 32” x 48” prints are $500 and 20” x 30” prints are $300. To purchase originals, contact Tim at timellisart@gmail.com or www.instagram.com/timellisart. Prints can be purchased directly from his website, www.timellisart.com. 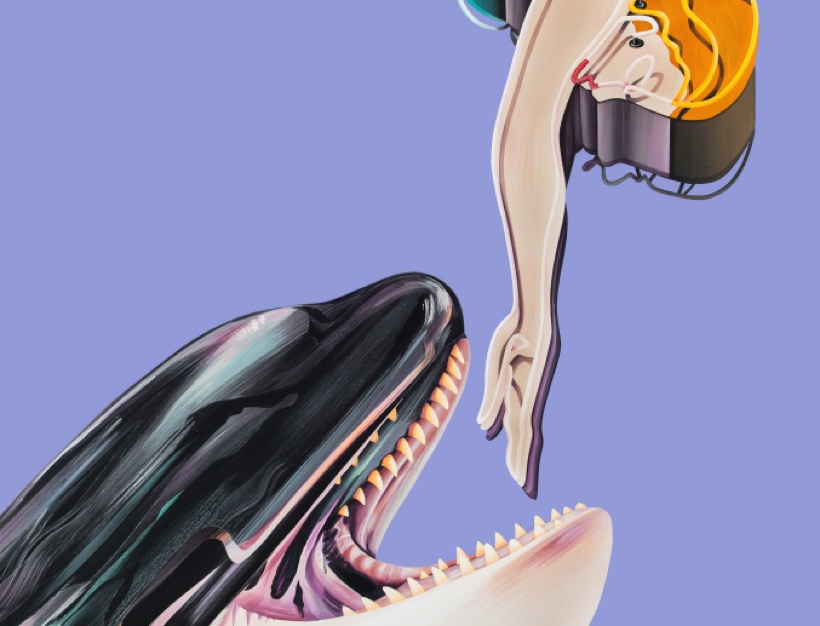 Don’t miss the opening reception of these prolific bodies of work, and a chance to meet two of LA’s most exciting up and coming painters!

A map of the Keystone Art Space where the exhibition will be held can be found here.

Private viewings are available by appointment from February 30th to March 12th.