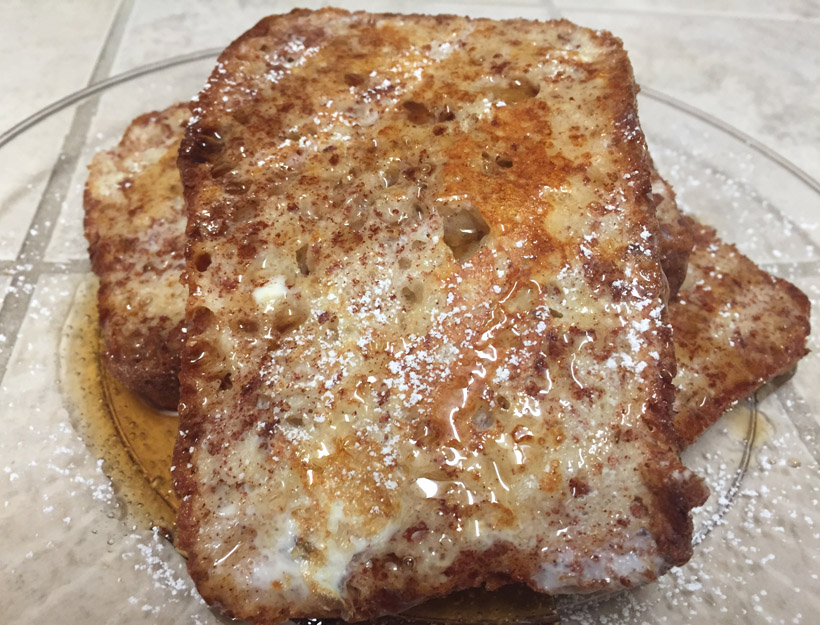 French Toast… there is so much to say. When I was young I was a pancake person. Now that I’m older I enjoy all breakfast items, including French toast. I think one of my favorite types of bread is Brioche, which is a sweet egg bread. It makes the best French toast. I made French toast for dinner. I was so excited! My husband liked it so much he asked for it again the next night!

1. Combine the water, yeast and sugar in the bowl of an electric mixer fitted with the paddle attachment (If the bowl is cold, start with warmer water so it’s at least 110 degrees when you add the yeast). Mix with your hands and allow to stand for 5 minutes until the yeast and sugar dissolve.

2. Add the eggs and beat on medium speed for 1 minute until well mixed. With the mixer on low speed, add 2 cups of the flour and the salt and mix for 5 minutes. 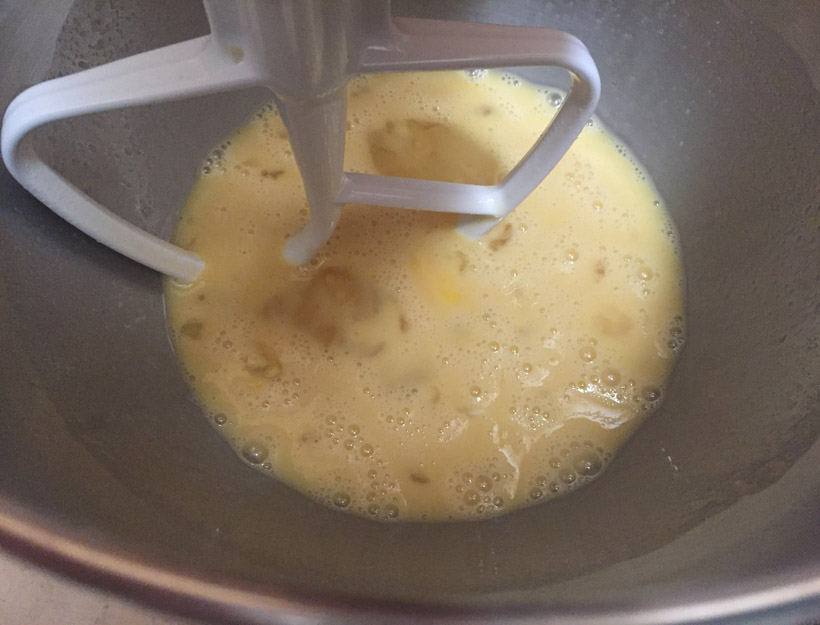 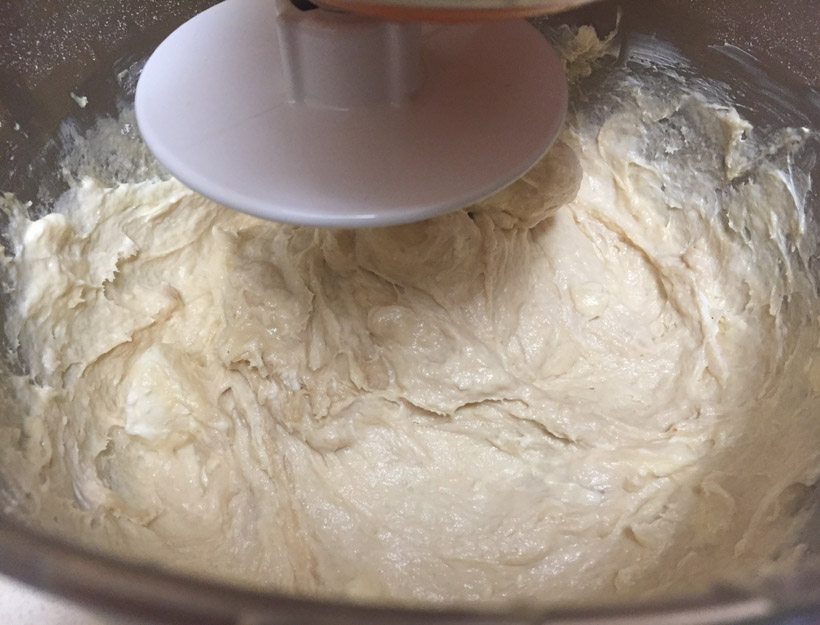 4. Switch the paddle attachment to a dough hook and mix on low speed for 2 minutes. Scrape the dough into a large, buttered bowl and cover with plastic wrap. Refrigerate overnight. 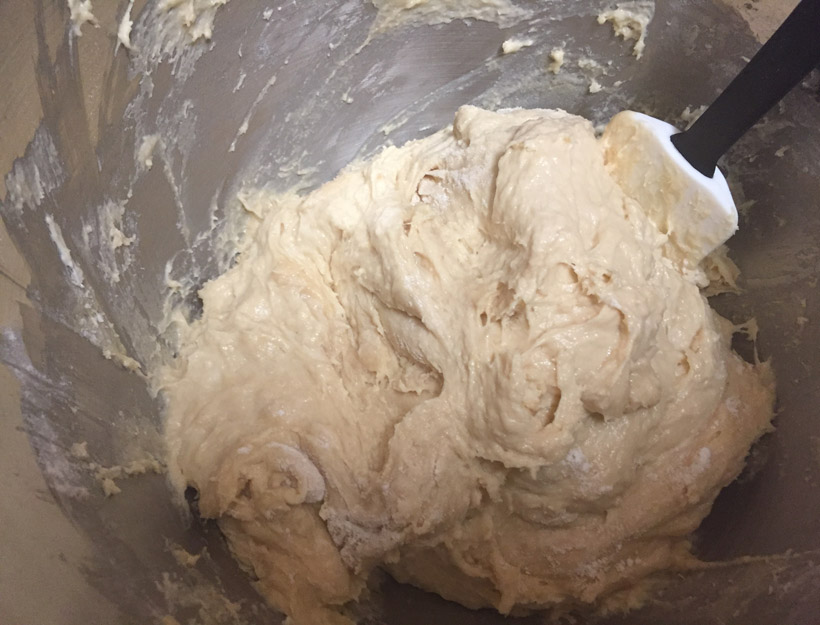 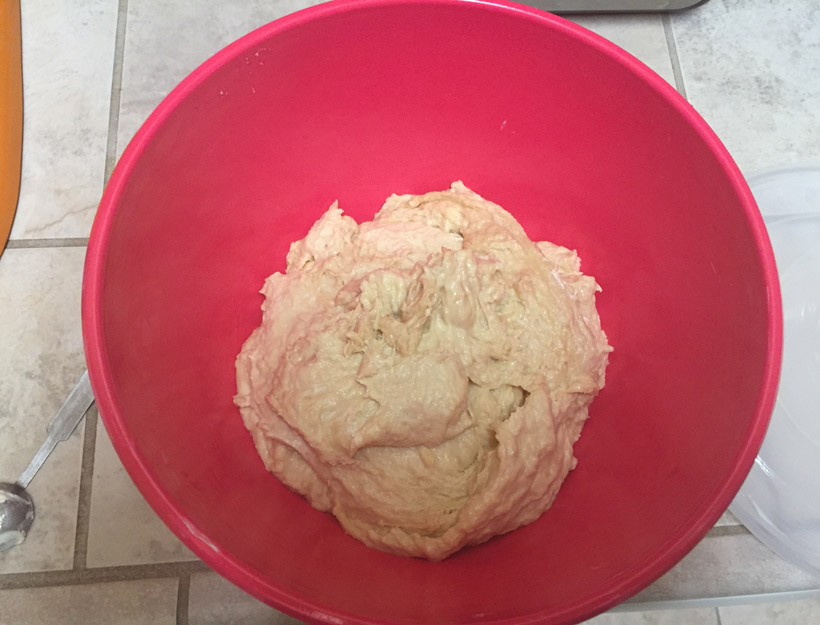 5. The next day, allow the dough to sit at room temperature for 1 hour. Grease two 8 1/2 X 4 1/2 X 2 1/2-inch loaf pans. Turn the dough into a lightly floured board and cut in half. Pat each portion into a 6 X 8-inch rectangle, then roll up each rectangle into a cylindrical loaf. Place each loaf, seam side down, into a greased pan. Cover the pans with a damp towel and set aside to rise at room temperature until doubled in volume, 2 to 2 1/2 hours. 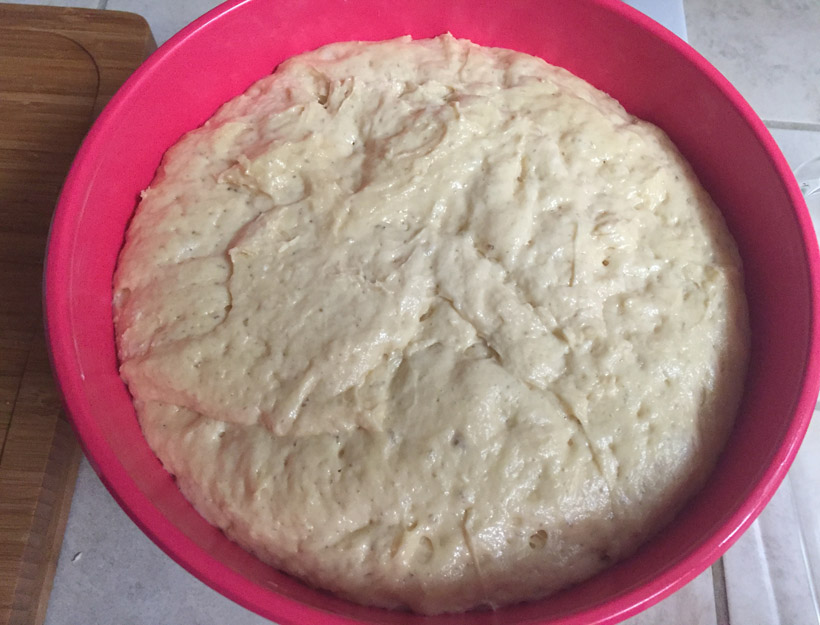 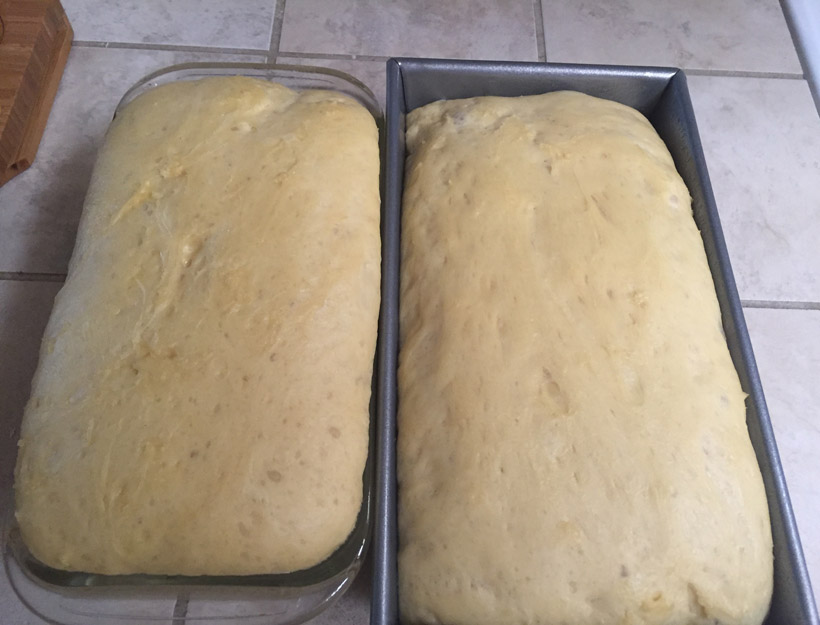 6. Preheat the oven to 375 degrees. When the loaves have risen, brush the top of each with the egg wash and bake for 45 minutes or until the top springs back and the loaf sounds slightly hollow when tapped. Turn the loaves out onto a wire rack to cool. 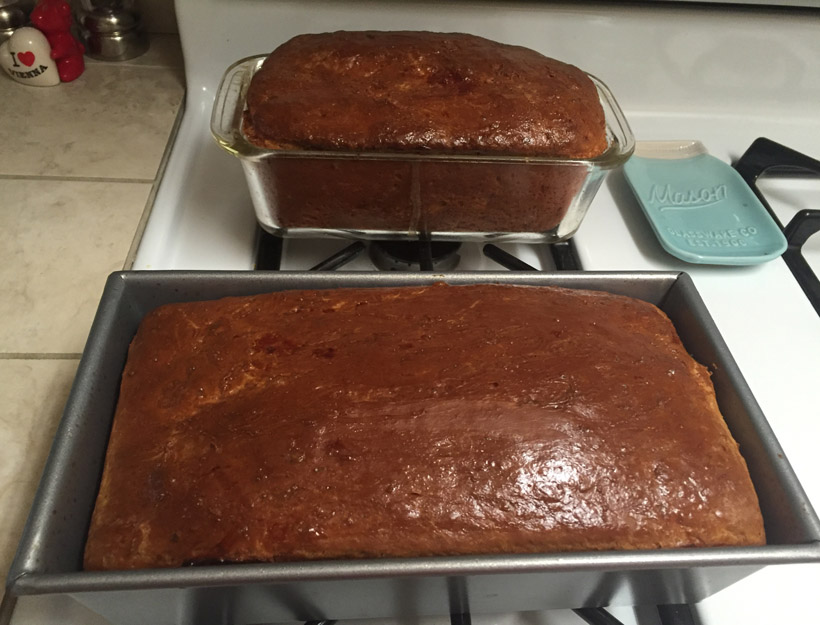 7. Once the bread has cooled, slice into 1-inch thick slices. Mix all the french toast mixture in a flat bowl. I use a pie dish, which works great. Then soak both sides of each slice of bread in the mixture. Then melt a little butter on a frying pan and fry the soaked bread until golden-brown. 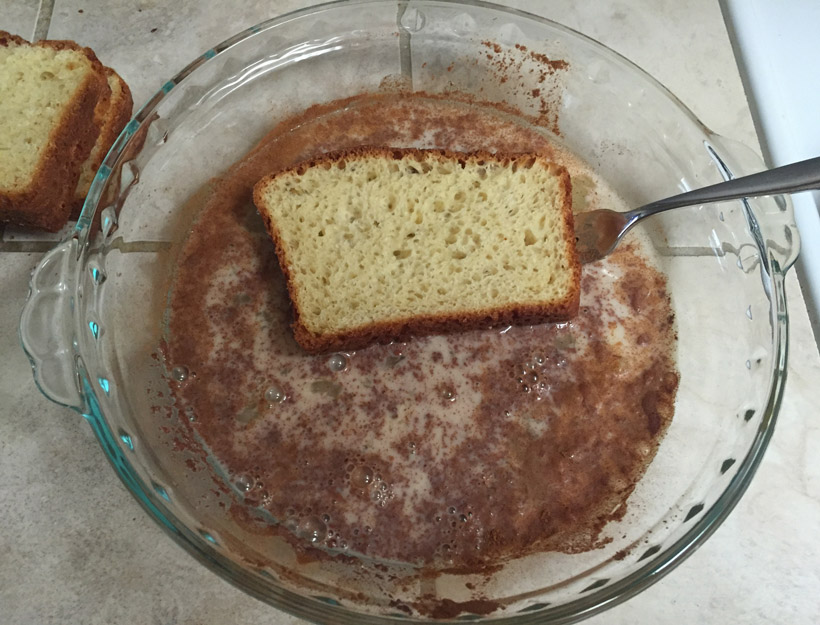 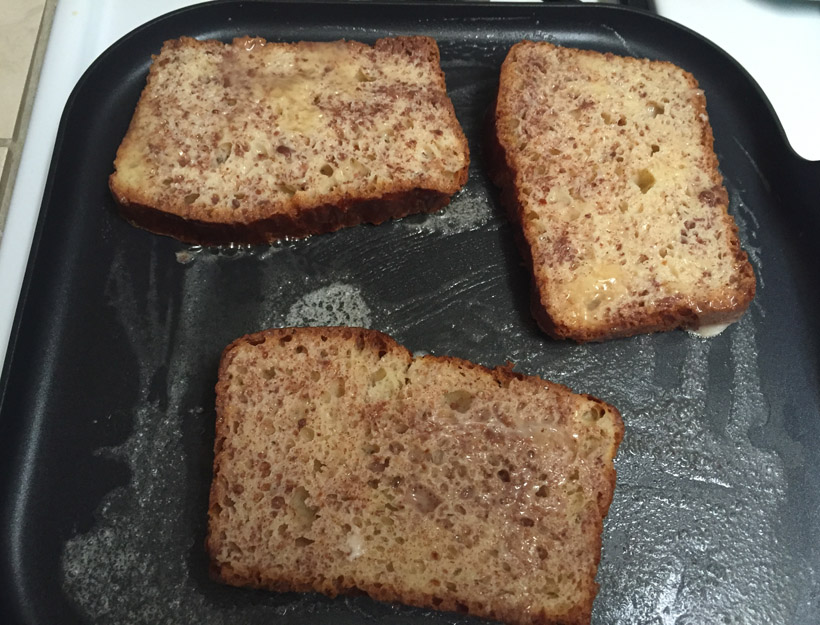 I remember when I was young people were trying to ban the use of the word “french” when talking about food. Things like “freedom fries” or “freedom toast” were being used. This is so silly if they just knew the history. I did some research on Neatorama and found that French toast is originally from the 5th century. It used to be that when bread went stale people would dip it in egg and milk then fry it, which is similar to what we do today. Apparently in 1724 a man by the name of  Joseph French gave it the name French toast after himself.  No matter where it came from or what we call it, I am excited French toast is here.
* 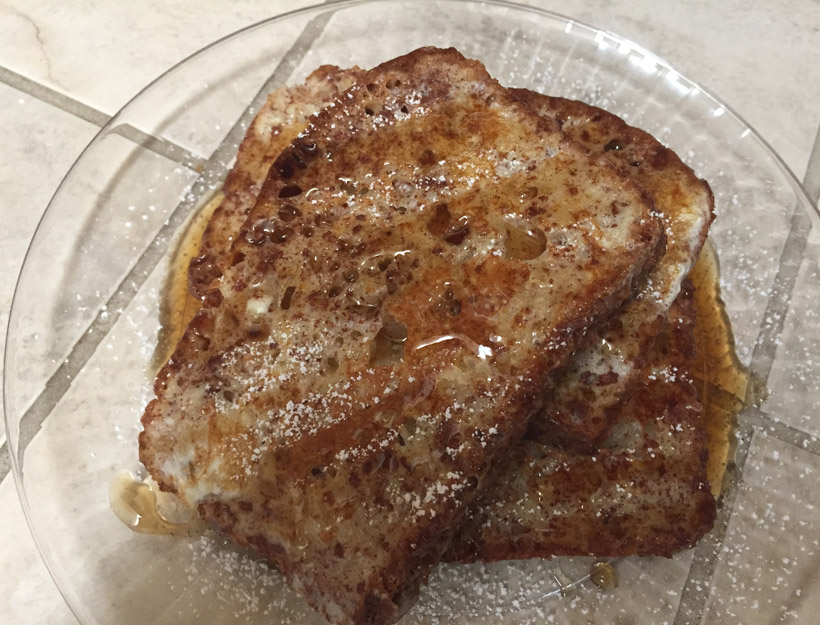