The mysterious island of Iona is calling – who will sojourn with us for a time?  The natural and spiritual appeal of this tiny island in the Inner Hebrides off the coast of Scotland has been drawing travelers to its shores at least since the 500’s when St. Columba and his companions arrived from Ireland and established a monastic community there. As a place dedicated to prayer and spiritual undertakings for centuries, Iona is considered a “thin” place to those with a Celtic mindset – a thin place where eternity and the present meet in a palpable way – so much so that kings have long vied for the blessing of being buried in this holy ground.  In fact, a 1549 inventory of 48 Scottish, 8 Norwegian and 4 Irish kings was recorded! Intrigued? 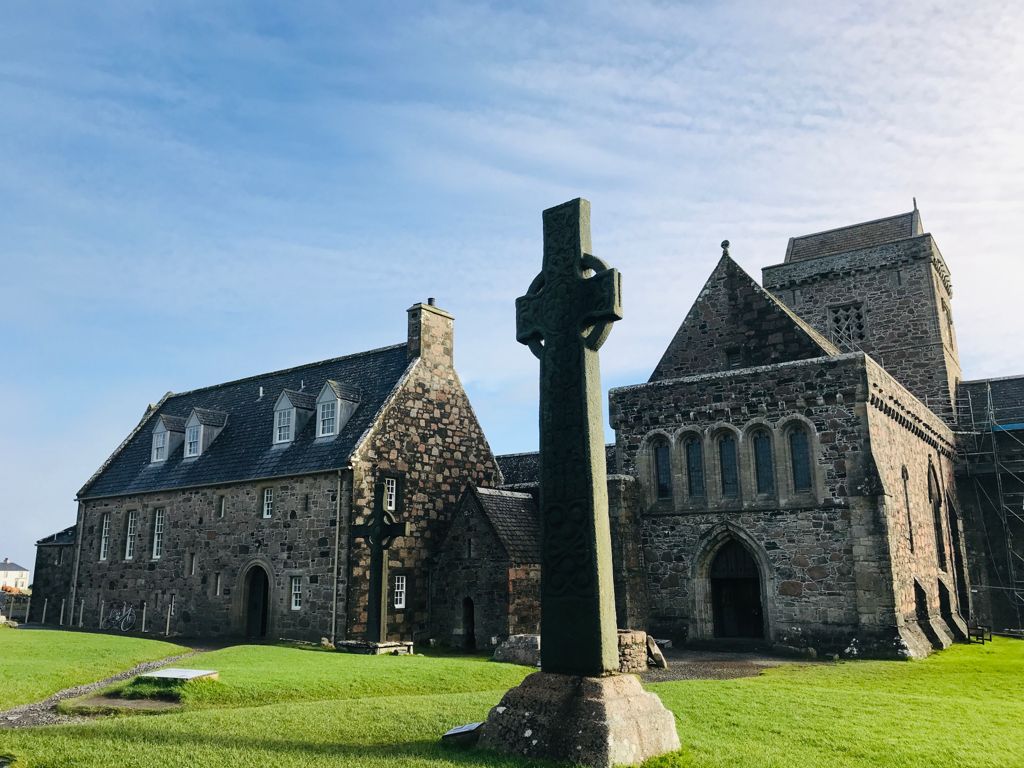 I had begun learning about a mysterious place called “Iona” at a church I attended – specifically, we began practicing an “Ionian Communion”, the ancient Christian practice of remembering the death and resurrection of Christ, where congregants file to a table of the “bread and wine” and instead of a church leader serving the communion, the congregation served communion to each other.  I also learned there was still a practicing ecumenical community, simply called the Iona Community, on the island to this day. The allure of an unbroken community seeking peace for our world, built on an ancient, but simple and accessible vision of faith, intrigued me. 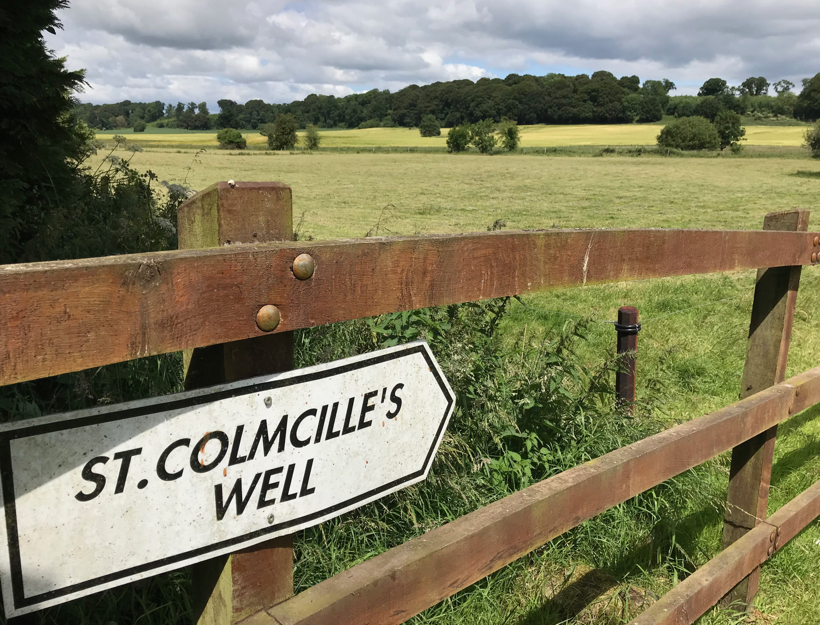 But it wasn’t until I further began to explore Celtic Christian History and Spirituality that I understood more fully the significance of this little island off the coast of Scotland. As my friend (and Culture Honey contributor Catherine Hommes) and I began to chart our course for Sacred Ireland I learned more about one of the three Patron Saints of Ireland, St Columba, or “Colmcille”.  Along with many other accomplishments, ultimately Columba made his way across the sea to Iona and founded an influential spiritual community there in 562 AD.  As my interaction with the Celtic Path grew deeper, I knew I had to go and experience the wonder of Iona for myself, and then ultimately, to lead small groups of pilgrims there with our newly forming travel company, Culture Honey Touring. 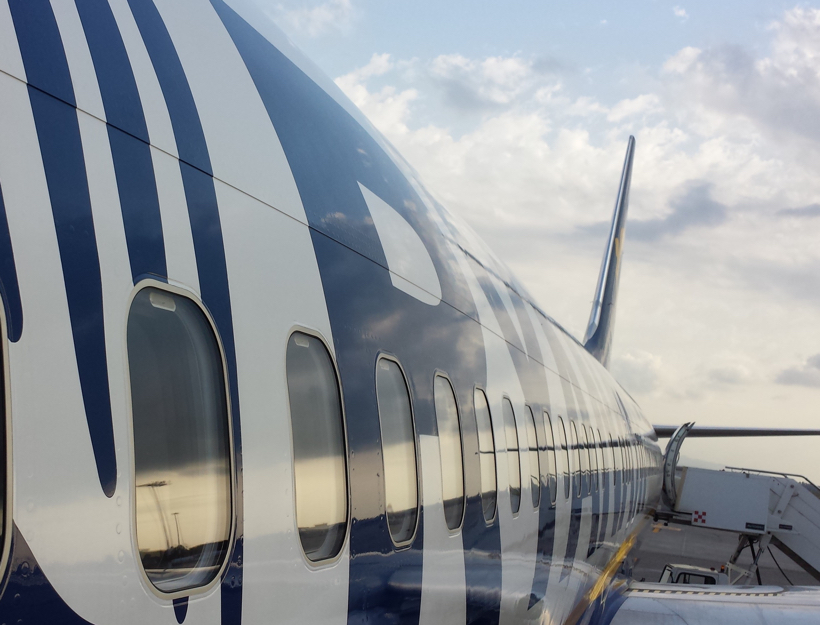 A short hop on RyanAir from Dublin to Glasgow

The journey to Iona, beginning on a hopper plane ride from Dublin, is one that I’ll never forget as I was so excited in anticipation of this special experience. Even hearing the differing accents between the Irish and Scottish versions of English during the travel was a treat!  On that first trip, I had also begun to learn about my personal Irish and Scottish heritage, something that wasn’t emphasized at all as I was growing up, but was now becoming significant to me.  And so, after an overnight stay in Glasgow, the journey to Iona continued with a full day’s travel via train, ferry, bus and then another ferry!  Did I mention that Iona is remote?  Not only is it a total adventure, but it’s some of the most beautiful landscape I’ve seen. 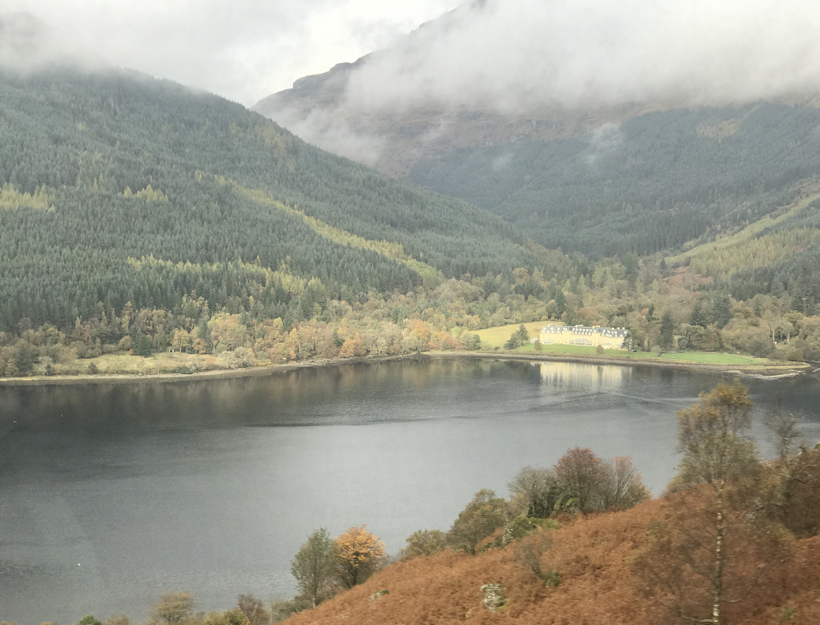 Scottish Lake and Manor on the journey from Glasgow to Mull, Scotland

Above is the view from the train window, and here is a beautiful lake in the distance… 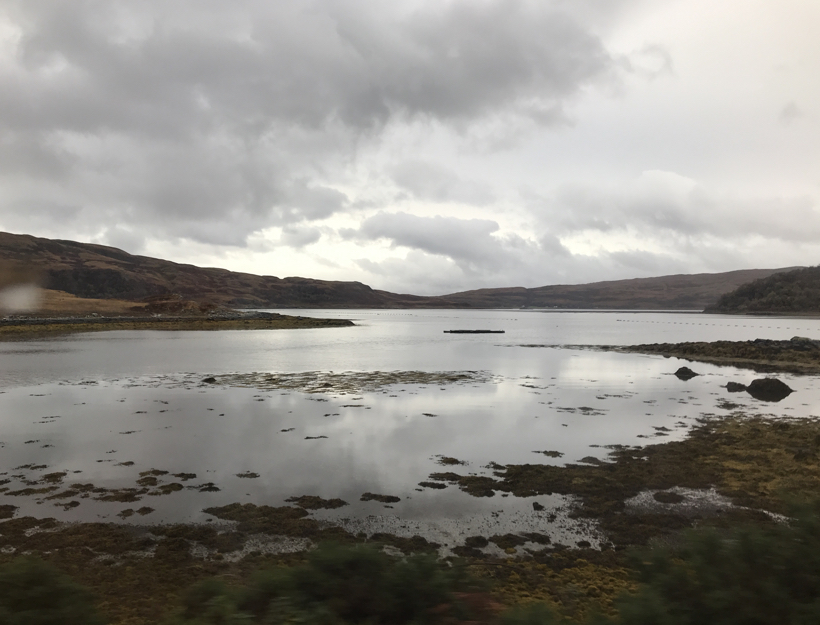 A view from a train window in Scotland….

Beautiful vistas opened up unexpectedly during the journey. Lakes and streams, animals, and even a castle peeked out from behind the clouds. But it was a small herd of Highland Cows that were waiting at one of the bus stops on the drive across the island of Mull! 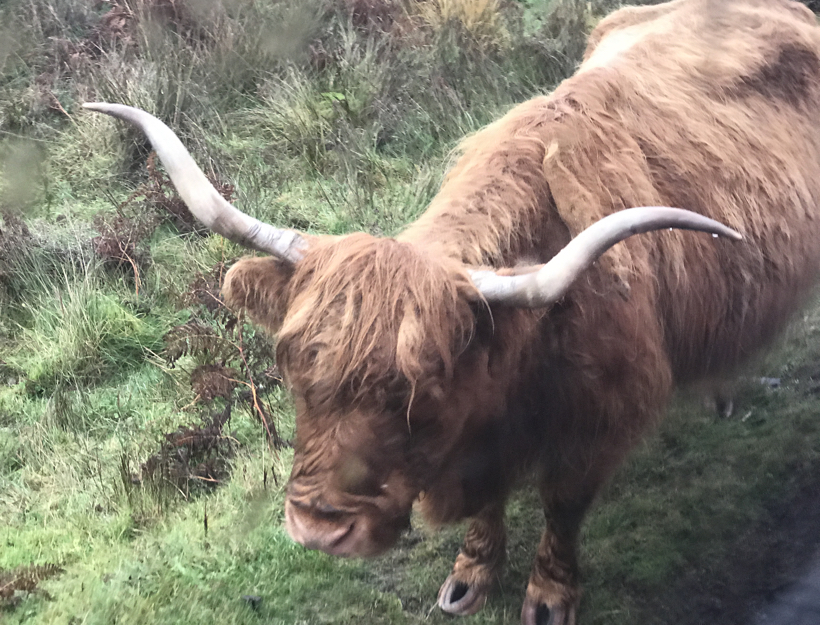 A Highland cow at a bus stop on the journey….

And then, once on Iona, I was greeted warmly and settled into my small, comfortable room.  For dinner I partook in some of the most fresh fish and organic garden grown meals I’ve ever eaten.  Combined with a nice glass of wine, I was ready for sleep and to awake the next day to experience the island. 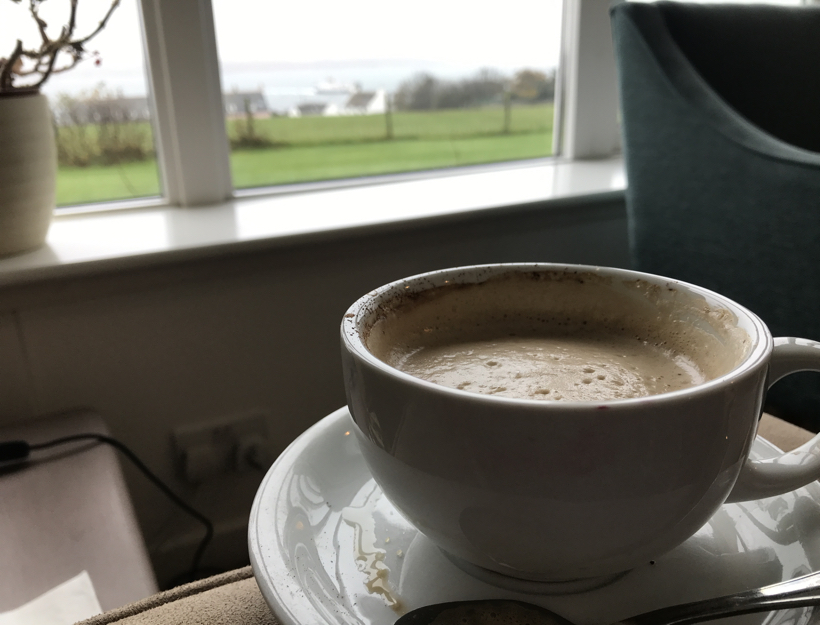 The next day was sunny and beautiful.  I had a local guide who gave me a guided walk around the Abbey and Nunery. The Nunery was one of my favorite places, imagining the sisters that lived, studied and worked there, while showing hospitality to the pilgrims and visitors to Iona… 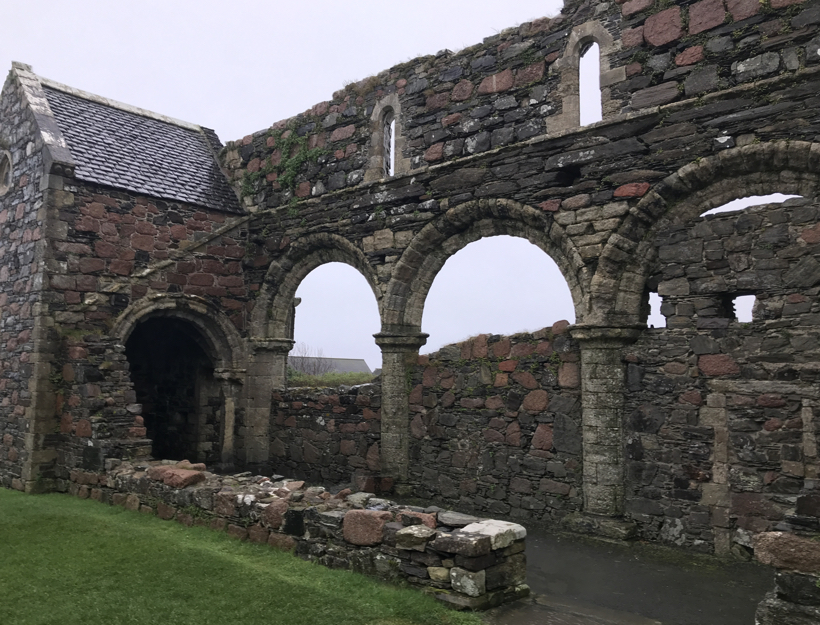 The Augustinian nunnery was founded at the same time as the Benedictine Abbey and is one of the best-preserved medieval nunneries in Britain, much of the ruins date from the 14th century according to the “WelcometoIona” website.. 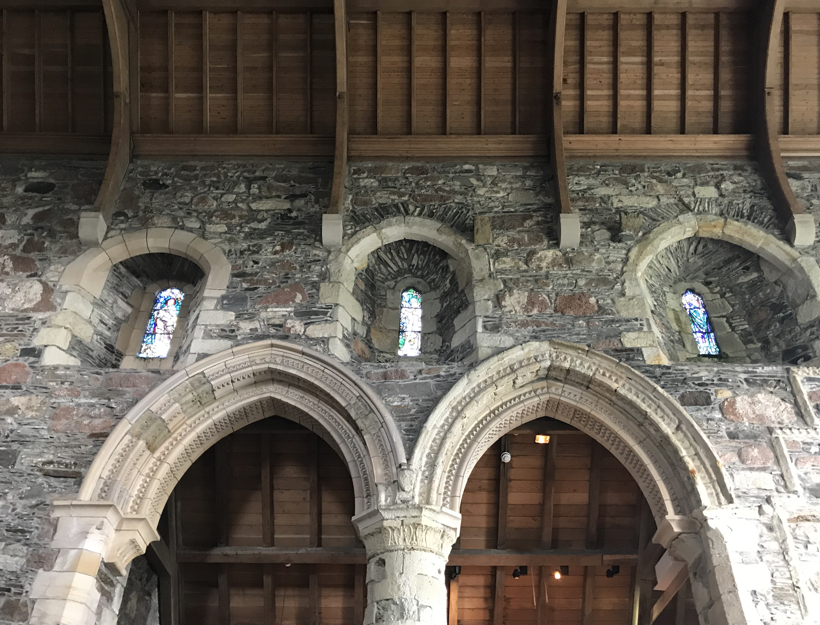 These beautiful arches inside the Abbey on Iona have echoed back the worship and prayer of Pilgrims since in an effort led by George MacLeod, the Abbey was restored in 1939.  There are morning and evening prayer services daily, led by the Iona Community, quiet, mediative and faith-filled. 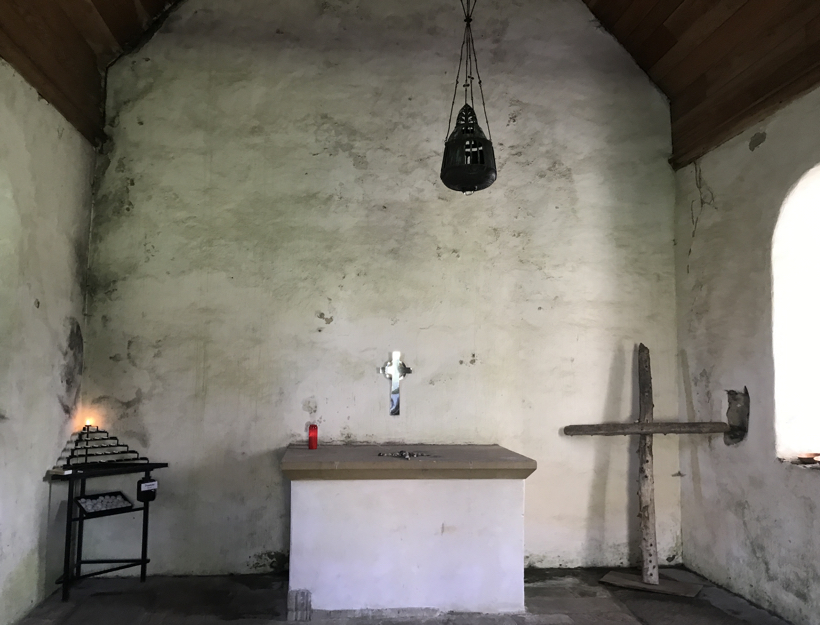 A special time is welcomed in the Orian Chapel.  Built in the 12th century, this simple structure draws one in and provides amazing acoustics for song and chant.  According to the “Undiscovered Scotland” site,

“But if Iona’s oldest complete building post-dates St Columba’s day by 500 years, the same cannot be said of the graveyard that surrounds it. Known as Relig Odhráin, it was named after one of St Columba’s followers, Odhráin or Oran, who according to legend volunteered to be buried alive as a sacrifice to prevent the walls of the first church built here from falling down. Many believe Relig Odhráin has been in continuous use as a graveyard since Columba’s day.” 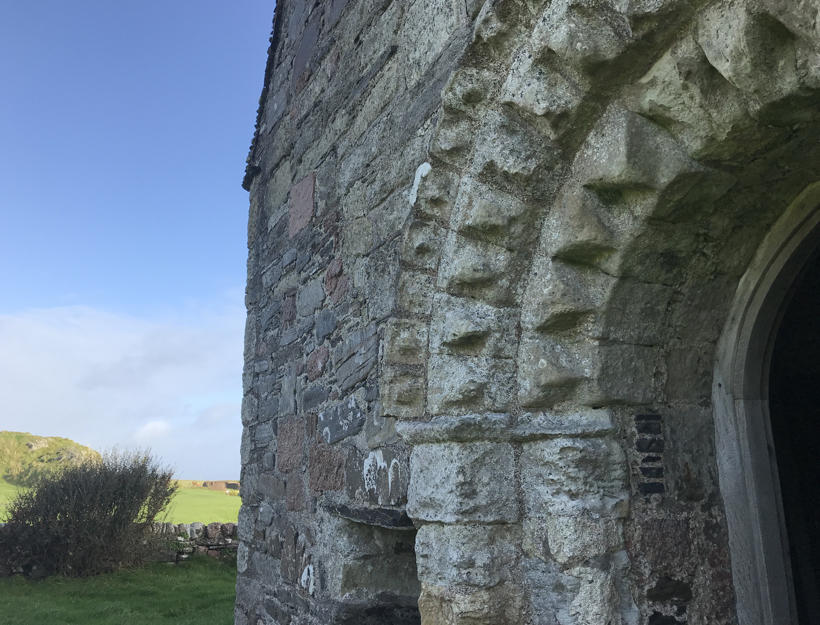 Emerging from the chapel, blinking in the light, one’s heart begins to soar.  What further delights await?  How about a walk to the sea… 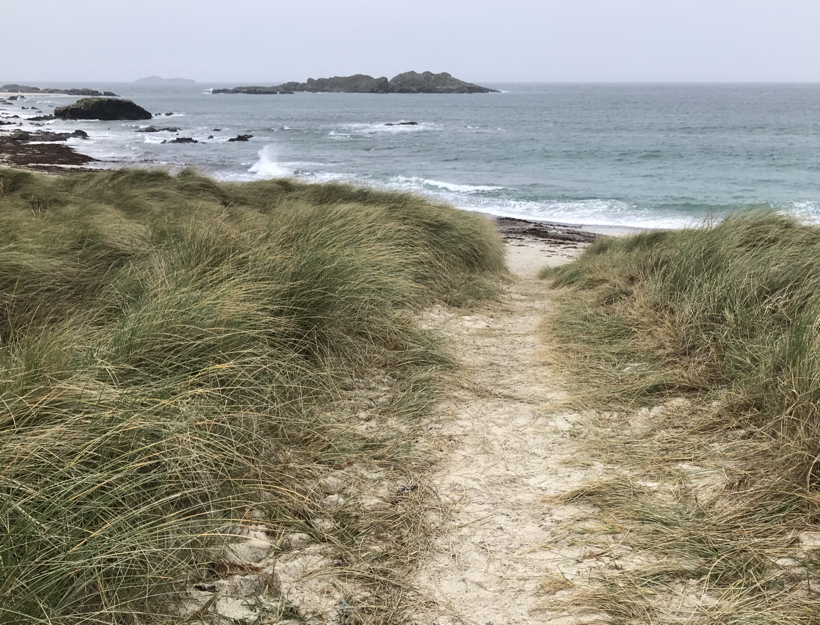 The sounds of crashing waves beckon from just over the trail…

The solitary walk was refreshing, sheep and cows were plentiful along the way from the Abbey to the beach above.  And there is a special green stone, sometimes called Columba’s tears, or Iona Marble, that can be found by the shore and then polished up later like my guide showed me… 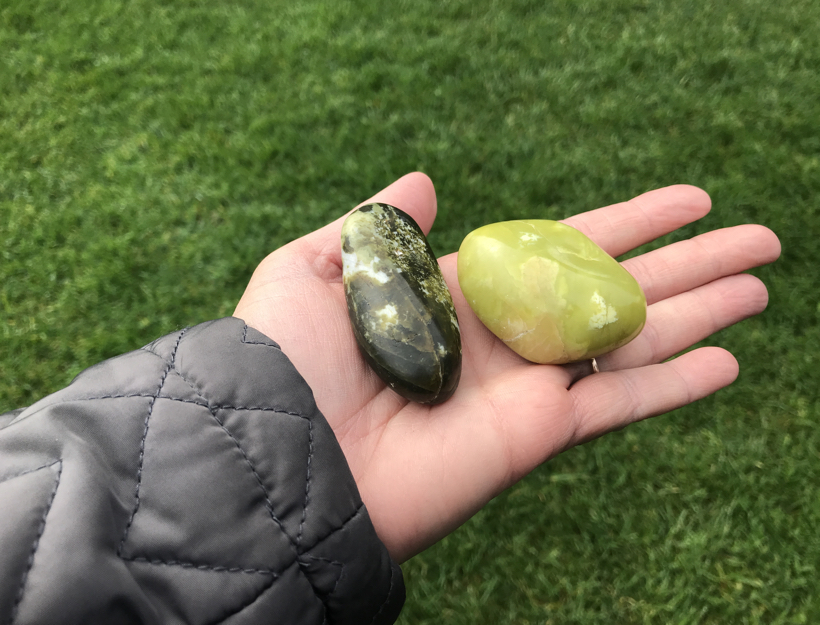 For those that find treasure in pebbles, there are plenty to discover! 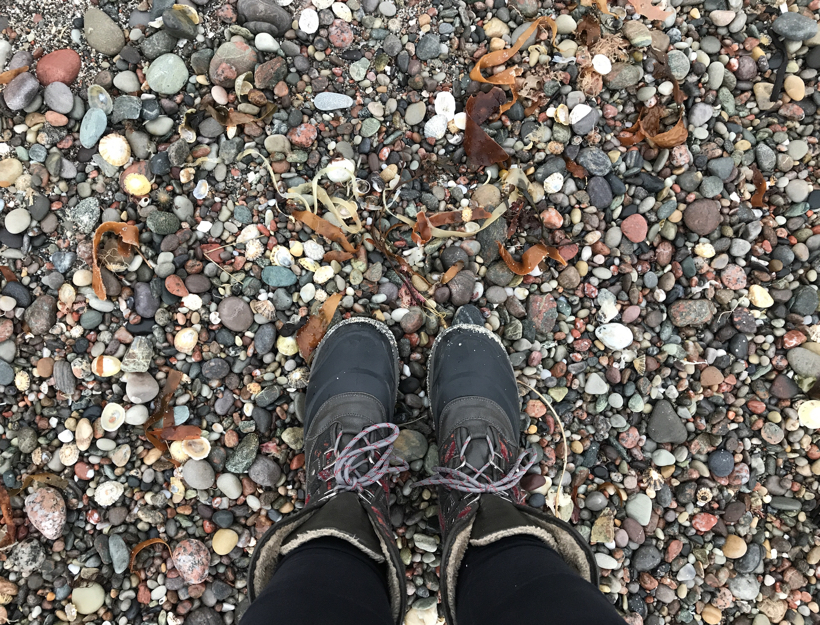 Pebbles on the Beach, Iona, Scotland

But for me, more than anything, the crashing sound of the waves and the ebb and flow of the sea spoke of the seasons of life….

As with any travel in Ireland or Scotland, I found it good to remember the Norwegian proverb, “there is no such thing as bad weather, just bad clothes” : ) I was prepared with gloves, warm, waterproof jacket and walking boots, a hat and etc.  But in case you need to purchase these things on the journey, I found many beautiful examples of Harris Tweed products, including those made from the Iona tartan tweed, but also, the local shops had many beautiful hand-made items to take home as gifts or to put on for one’s own warmth! 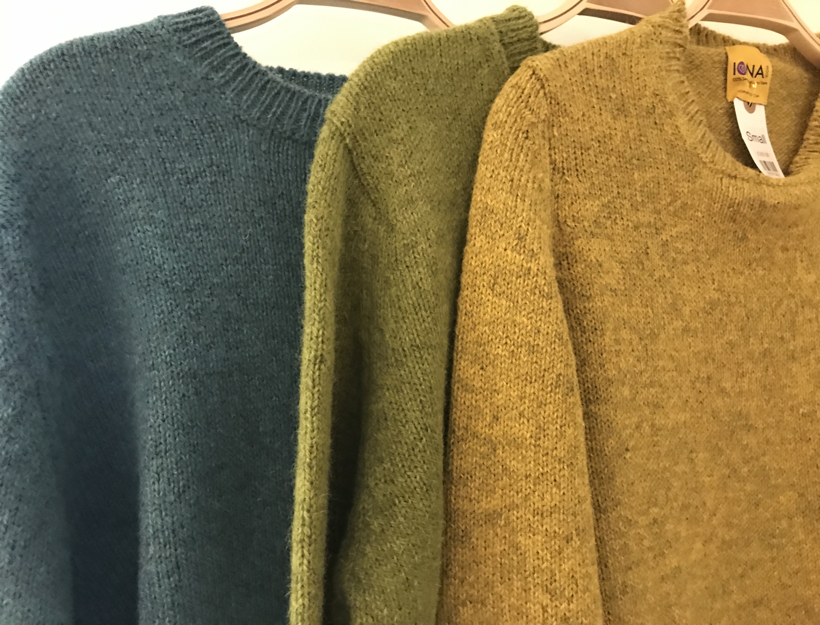 After my walk to the shore, the stormy clouds passed a beautiful blue sky emerged as I walked back to the village and my hotel… 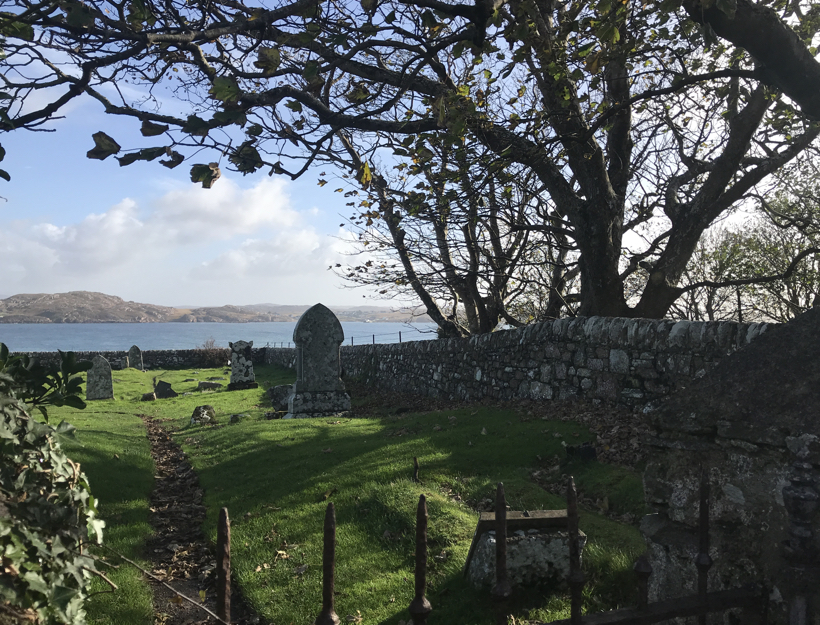 In spending time on the well-known Pilgrimage destination of Iona, Scotland, I had a deeply expansive experience that I will always cherish. In fact, when I travelled to Iona to plan out Culture Honey Touring‘s Pilgrimage there, I experienced such a profound and centering time that I have only now felt compelled to write about, over 3 years later.