Sometimes, the most powerful move you can make is to name a thing; describe it with a fullness and accuracy that obliterates stereotypes, spreads awareness and makes a statement on the bracing fulfillment of sharp honesty.

That is the earnest idea which powers the best moments in Black Daddy: The Movie, a moving film assembled by first-time documentarian Damon Jamal Taylor – also known as the Oakland area musician Dame Drummer.

When it works, Black Daddy names the contours and challenges of being a Black father in ways that are important for the world to see.

For much of the documentary, Taylor just turns on the camera in front of his friends, colleagues and relatives in California, all Black men, and lets them tell their stories about Black fatherhood. The settings may vary — from a neighborhood barbershop to the set of a music video and an informal retreat gathering several men to support each other – but Taylor uses different environments to glean different things from his subjects, giving these earnest, passionate men space to push back on all the myths we’ve heard about Black dads who create children they care nothing about.

The film starts with a simple question: What does it mean to be a Black father in America?

“To be a Black father in America, is to be in a state of, like, joy…and terror,” says Mike Austin, moments before the film displays TV news clips on young African American men like Tamir Rice, Trayvon Martin and Jacob Blake – all shot to death by police or self-appointed neighborhood watch patrolmen – driving home how much of their children’s fate lies outside their control.

“Being a Black father in America,” says another voice, after the deadly montage has ended, “is hoping you get to do it a long time.”

In addition to seeing earnest Black dads working hard to be present for their children – the film notes that Black fathers are often very involved with their kids, contrary to stereotype – Taylor’s film also showcases Black men talking about their own fathers. Those conversations show how the lack of a father figure can stay with some men for their entire lives.

“I’m gonna go through life not knowing how it feels to call another man daddy,” says one man speaking to Taylor’s camera who never knew his own dad. “I’m in my 40s and I got nothing. (But) not having a father taught me everything about being a good dad.”

We see Black men baring their souls in ways society doesn’t often encourage and media rarely depicts. One powerful scene features teacher and musician Karega Bailey speaking on the pain of having a child die, explaining the term “angel father.” As Bailey describes a moment when he gave away items originally bought for his child — a crib and car seat he would never use — Taylor hugs him, tears flowing.

Perhaps the best message here, often articulated through example and indirectly, encourages Black men to be more open about their lives, even when the truth may feel less than perfect. Taylor describes, both in his music and in speaking to the camera, how his father had children with women other than his mother that he wasn’t aware of growing up. His words on how the discovery of those siblings hurt and confused him were a powerful example of how shameful secrets within a family can have corrosive effect.

The music here is a vibrant, urgent companion to the visuals, with Taylor and his collaborators offering raps centered on their experience as fathers and sons. At times, it threatens to turn the film into an extended commercial for his music. But there’s also another message: yes, even performers as creative and streetwise as these, know how important it is to be open with their feelings on fatherhood and family.

There are nits to pick here. Perhaps in an effort to avoid blame or shame, Taylor offers selective details about the stories of several fathers in his crew. One, fellow rapper Kev Choice, talks about having children in Atlanta and California, with little backstory.

Another man describes fighting to have a protective order against him lifted, despite claiming to have video footage of his children’s mother threatening violence against him. Why the order was granted in the first place is never discussed. For a film whose central thesis is showcasing Black men trying to fulfill their responsibilities as fathers, incomplete stories like these make it tougher for the audience to understand exactly what lessons to take from their examples.

There is little space here for mothers, wives or girlfriends, which lends a one-sided feel. However much he might want to focus on Black fathers and sons, Taylor loses something by not including the women who are significant parts of that equation.

Similarly, it would have been nice to see a more expansive range of fathers, beyond fellow musicians, friends and relatives. There are a lot of different ways to be a Black father. And hearing from Black men in markedly different situations and environments – outside Taylor’s own comfort zone of relationships – might have enriched the story even more.

By the time an unexpected twist leads Taylor to travel back to his Cleveland hometown and reconnect with people from his past, you are drawn into the intimacy of his surroundings, where he reveals that there were a lot of men who served as father figures in his life back in Cleveland who were not his biological “daddy.”

In the end, Black Daddy: The Movie is a compelling, creative platform to watch Black men offer raw, emotional testimony on their experience with and views of fatherhood. At times, it can feel like one long group therapy session.

But its power in validating the positive impact of resisting secrets, naming truths – however hurtful – and taking responsibility is a welcome, much needed message. To achieve all that while pushing back on stereotypes and uplifting Black men is an amazing achievement indeed.

As an official sponsor of the festival, Culture Honey recommends marking the calendar for each year’s Black August Festival, where provocative, as well as sensitive and thoughtful films, such as Black Daddy: The Movie can be discovered. 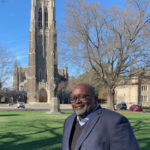 Eric Deggans is NPR’s first full-time TV critic. He came to NPR from the Tampa Bay Times newspaper in Florida, where he served as TV/Media Critic and in other roles for nearly 20 years. He also serves as a contributor and media analyst at MSNBC/NBC News. A journalist for more than 20 years, he is also the author of Race-Baiter: How the Media Wields Dangerous Words to Divide a Nation, a look at how prejudice, racism and sexism fuels some elements of modern media, published in October 2012 by Palgrave Macmillan.

I wanted to hear from everyday Black men talking about their lives and where they find joy in the midst of the unrest in this new millennium crusade to substantiate Black lives.

So, I invited small group to join a conversation at the KAOS Network Art Center in Leimert Park, CA.