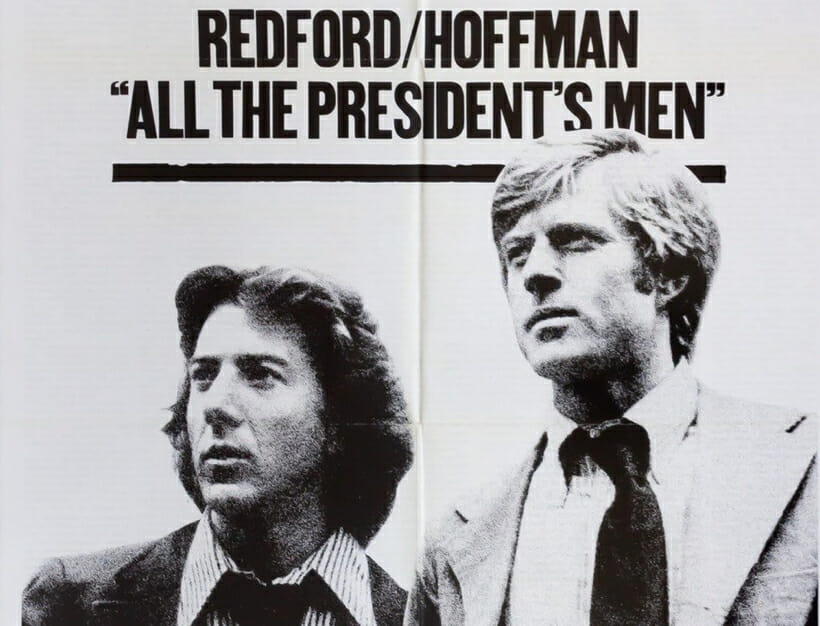 All the Presidents Men

Nowadays, any person you come across will know about Watergate or at least be familiar with the name. The term has become shorthand for subsequent political scandals as well as viral celebrity slip ups. However, for all of the term’s popularity, there are still plenty of people who do not know the details of what actually went down in the Watergate scandal. All the President’s Men, released only two years after the Watergate investigations, is an exploration into the journalistic process that led Washington Post reporters Bob Woodward and Carl Bernstein to connect the pieces between the break-in at the Watergate Hotel and widespread corruption and abuse of power within Nixon’s presidential administration. 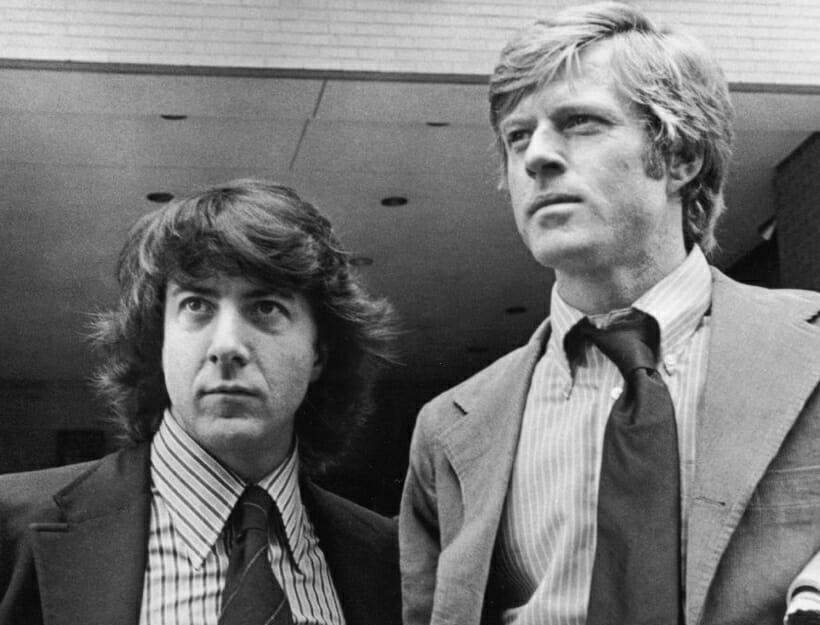 All the Presidents Men: Dustin Hoffman and Robert Redford

This is not a film that goes easy on the audience. From the moment the film opens, we are placed within the events surrounding the break-in with no text wall or exposition dump to explain what is happening to the viewers. This adds to the realism of the film. What seems to be an isolated incident quickly spirals into something far more sinister thanks to the enthusiasm and intuition of Woodward (played by Robert Redford) and Bernstein (played by Dustin Hoffman). The truth of what is truly happening is complex. Getting credible information from willing sources is like pulling water from a stone, so Woodward and Bernstein are often operating largely in the dark. This is exactly where the audience will be if they are unfamiliar with the events of Watergate. I found myself relying on my father for clarification at several points in the film to understanding the historical significance of what was being said. A cursory overview of what happened at Watergate can help enhance the viewing experience greatly. 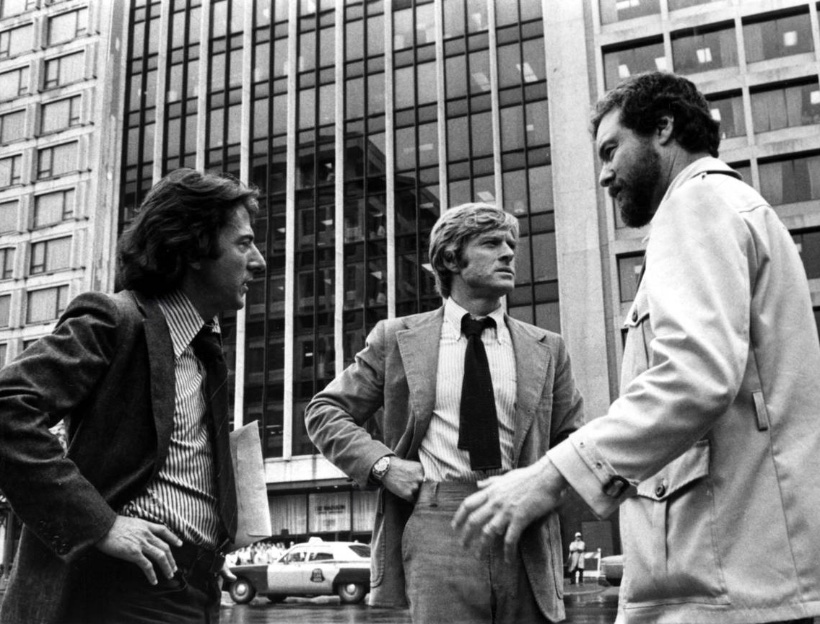 All The President’s Men: Film Review

While it may be a turnoff to some that this movie requires your full attention, it is also an aspect that deserves praise. The depiction of Woodward and Bernstein’s struggles to get information feels true to life and makes the audience feel like they are present with our heroes in the investigation. Real life mysteries are not tied up as neatly or quickly as movie plots would lead us to believe. Oftentimes Woodward or Bernstein receive information that they are unable to publish with credibility due to the need for sources to remain anonymous. Rather than each piece of the puzzle leading them clearly toward their conclusion, the men spend much of the film sifting through piles of records in order to find the few relevant parts they need, then piecing the rest together through intuitive guesswork until they can get their suspicions confirmed.

All The President’s Men does not glamorize journalism. Rather than being filled with fast-paced chase scenes or action sequences, most of the film covers all the tedious work Woodward and Bernstein put in to reach the truth: endless phone calls and nights spent combing through employment records and cash receipts, following the paper trail to prove the hidden corruption. While this work was most certainly dull for the men  at times in real life, the film handles its pacing expertly, keying in on the points of success within the investigation. Often these moments are the smallest win: a government official slipping up in his words after being woken up by the phone, non-denial denials of what the Washington Post printed that gave the newspaper the confidence to continue printing articles, or sources who are unwilling to name names giving initials instead. It is truly impressive to see how Woodward and Bernstein are able to take the little information they are given and gradually amass enough proof of the White House’s involvement in Watergate to eventually lead to Nixon’s impeachment and resignation. 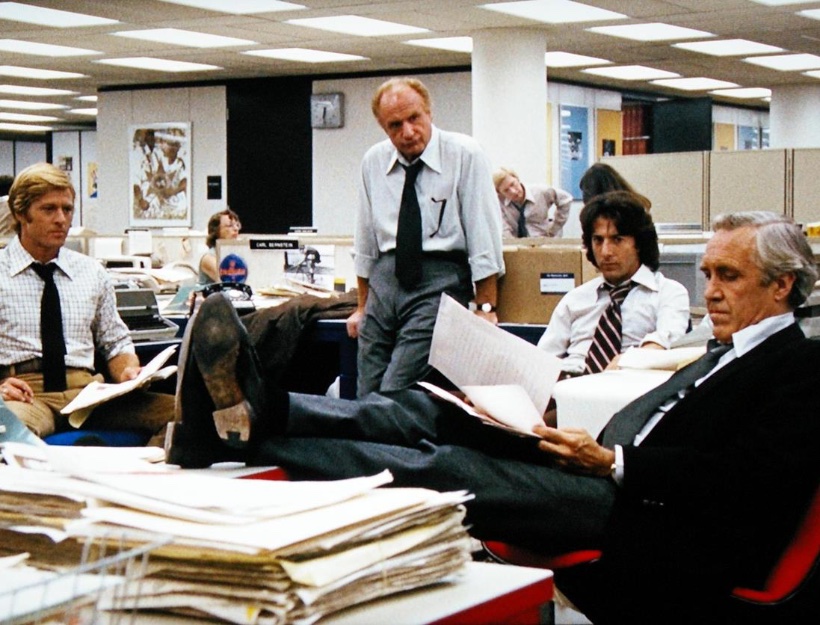 All The President’s Men: Film Review

The film does not cover the entirety of the Watergate investigation. Perhaps the book written by Woodward and Bernstein bearing the same title goes into further detail than the film’s runtime could allow. Considering that All the President’s Men is already 2 hours and 18 minutes long, it makes sense that every part of Watergate could not be covered in its entirety. Nevertheless, the film ends beautifully, capturing the true spirit of its narrative. While in the foreground the TV shows Nixon give his inaugural address upon reelection, Woodward and Bernstein continue working tirelessly in the background, composing articles that systematically lead to the downfall of this political giant and other top government officials. This is a film that shows what true investigative journalism can be without the ease or glamour Hollywood often gives such narratives. Considering the importance of Watergate within American history and politics, it is well worth a watch. As always, it is important to know where we have come from so that we may all be cognizant of and avoid such scandals and injustices in the future.
*