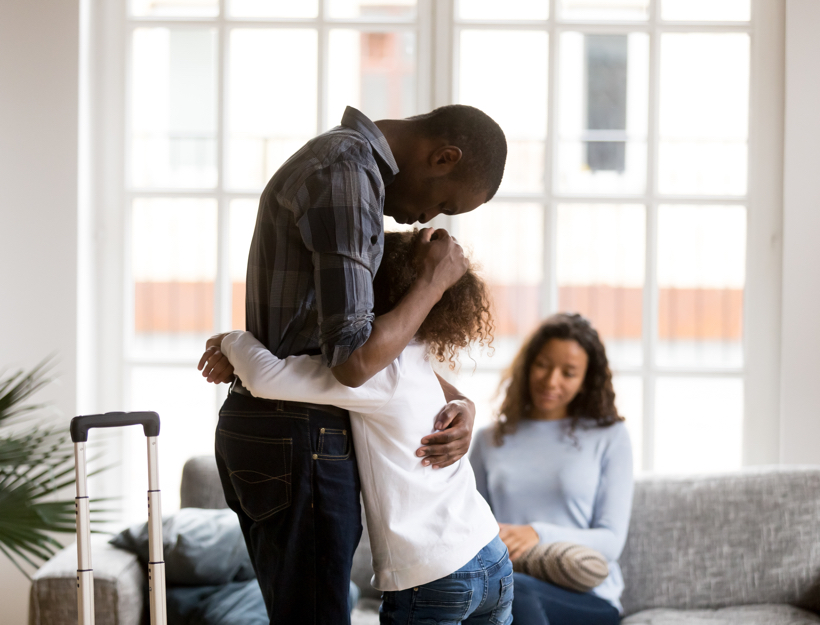 As a boy I would watch from the window next to our front door as my father slowly turned his car around and drove away, his taillights disappearing into the dusk. Usually I would stand there for a few more seconds to try to hold on to that moment of his departure, even though I knew he wasn’t coming back for another month. In those days after my parents separated and determined joint custody, we would visit my father at his home one weekend out of the month so that we were able to spend time together. It never seemed like enough, so it was hard for me to watch his car leave the house and then wait for another scheduled visit in the future.

I remember the day my father said goodbye. At around 6 years old one has little concept of what goodbye means or for how long it is to last. Or if it is permanent. He gathered my brother and me in his strong arms and gave us one of his best hugs and said he was going away for a long, long time. Rarely did he show any emotions with us, so it was troubling to me that on this occasion he was visibly upset.

Of course I had no knowledge of what had transpired between him and our mother. What conflicts and indiscretions occurred that led to their separation and ultimate divorce, if the divorce proceedings were amicable, competitive or costly. Not to mention the emotional toll on both of them; even to this day they have remained extremely silent about the situation and process. As a child, though, you blame yourself for the breakup, even after you are told that it wasn’t your fault.

What is stunning about My Daughter’s Keeper is that while there is some remorse about hurting the child, the story is really about what is best for the adults in this relationship. Whether it is the father who wants to maintain custody of the child or mother who uses custody as retaliation or child protective services system that wants to litigate the child’s life into potential foster care, no one is really considering the long-term effects of the legal wrangling, the systemic limitations, the selfishness of a mother nor the vanity of a father on the child.

We wonder why we have children who suffer from low self-esteem or depression! Who act out in ways that shock teachers in school or society overall with threats of suicide or high levels of substance abuse. It is actually astounding that more children in situations like these don’t end up with shattered lives and marginal careers!

A good friend of mine describes the situation of trauma like this by asking a different question when a child is acting out.  Instead of inquiring, “What is wrong with Sally/Billy?”, she asks: “What happened to Sally/Billy?” In other words, what traumatic experience caused the child to paint her hair blue, or to sock a classmate, or to drop out of school at 16? Instead of blaming the kid, reframing the question seeks to find out why the child is filled with anguish, hopelessness or frustration.

If you are a child of divorced parents, which is a high likelihood if you live in the U.S. in the 21st century, then you know what happened. It is not only the shuttling back and forth between parents and the dual lives that you lead at 8 years old, it is also the gnawing feelings of rejection and responsibility. “If I weren’t born, then my parents would still be together.” “If I weren’t so much trouble, then my parents would never have fought with each other.” “If I just make myself really small, then they will be happier and maybe get back together.”

In my case, I tried to be the model citizen and never cause any problems to either of my parents. Aiming for high grades and participating in tons of extracurricular activities, the idea was to not be an added worry for them. My brother took a different route by acting out, being brash, combative and angry. My sister, being the youngest, escaped under the veil of boyfriends and parties that didn’t show up on my parents’ radar because they were busy solving their own problems.

It would be helpful for the dad or mom who is on the precipice of creating a broken family to read My Daughter’s Keeper.  It might frighten them enough to rethink their behaviors and actions such that they could save a marriage. However, the real prevention is to be cognizant of what is best for our children right from the start. And to make decisions that match the love, care and concern that the author professes for his child before he produces one.

Here is where we find redemption: in prevention and in taking responsibility for one’s actions. To his credit, the author is working diligently to overcome the havoc he wreaked on the lives of friends, family, and loved ones. His first step was to write this book as a vehicle for warning others against the vagaries of ego and lust and to inspire those on a similar path to focus on what is the most important piece of the equation: their children.

In addition, the author has developed a program that seeks to teach young men not only how to be attentive fathers, but committed husbands as well. ‘Manhood Camp’ is a 10 week Life Skill program designed for young men on the margins of society to be more self-aware, be empowered, and ultimately be the ones who take responsibility for their actions. He also writes about issues related to being a father like radicalized masculinity and societal expectations in the Fatherhood Circle Blog.

At the end of the book My Daughter’s Keeper, the author pauses to offer some thoughts on ‘lessons learned’ from his experience. The one that stands out among these insights is: “An ounce of prevention is worth a pound of cure.” He states that for years he entered into relationships recklessly, without considering “…the consequences that could result from my actions.” Obviously, he has learned what tragic outcomes result from this type of careless behavior. Let’s hope that he is able to teach other young men the same lesson before they become fathers.
*