What does it mean to live?

That is one of the many questions that What Remains of Edith Finch brings forth to the player as they journey through the game. You play as Edith Finch, a seventeen year old girl who is journeying back to her family’s home with a key from her recently departed mother, a plethora of questions and the overwhelming fact looming over her that she is the last remaining Finch.

As you wander forward you see the Finch House, an immense structure that has been built upon time and time again, making an odd yet beautiful home.

This setting feels fitting as you make your way through this truly one of a kind house filled to the brim with the history of a family full of members that have passed away before their time. As Edith navigates through the hallways, you learn that the rooms of the different deceased family members have been sealed shut and little peepholes have been added to each door. By looking into a room frozen in time, you become the observer and discoverer of the history of the Finch family. Edith and you, the player, are on a journey together to learn the tales of this family and the supposed curse that surrounds them. 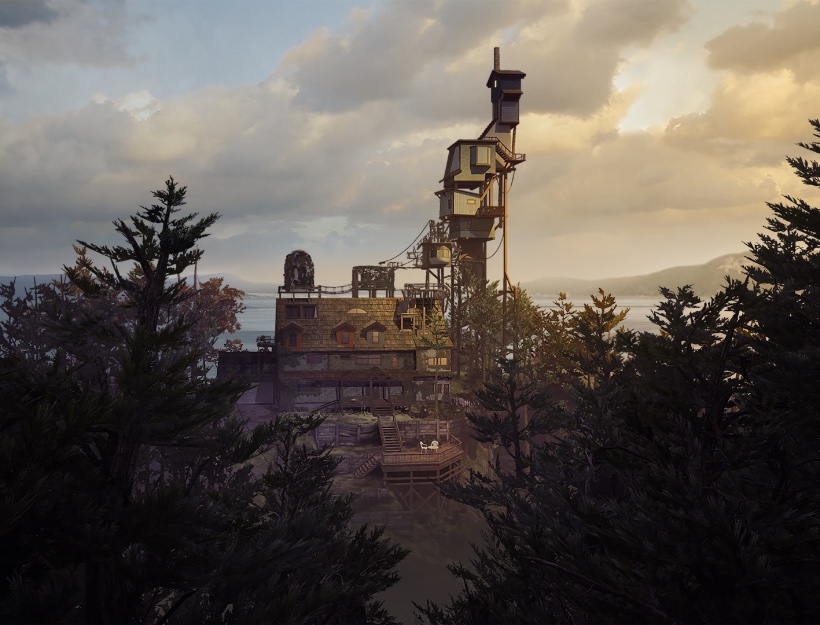 The gameplay of What Remains of Edith Finch is fairly straightforward using only the analog stick to move and a few buttons to interact with the objects in the world. It is a walking simulator through and through but what draws people into this game isn’t the gameplay but the world and the story that weaves throughout. The smooth and clean graphics help envelop the player in the world of the Finch family.

Walking through the different rooms you immediately get a sense of who each person was. The display of planets and stars dangling from Calvin’s section of the room, adorned with nothing but blue, yellow and white, emulates the colors of space. Immediately you can tell that he adored space and you come to wonder what would have been if he hadn’t died so young. Each unlocked door makes it feel like you are stepping into the personal space of that Finch family member, introduced to who they were in simple environmental storytelling.

The music perfectly captures the tone of the rooms, provoking emotions as you get to the meat of the gameplay and story. Within each room the player finds a memorial to the Finch family member who occupied it. These memorials were made by  Edith’s great grandmother and carrier of the same name, Edie. A hand-carved and painted picture of the departed stands as a marker along with a handwritten offering that tells the tale of their death. Some of these tales are told from a sibling or a parent’s perspective. Each one pulls at the heartstrings and evokes empathy. 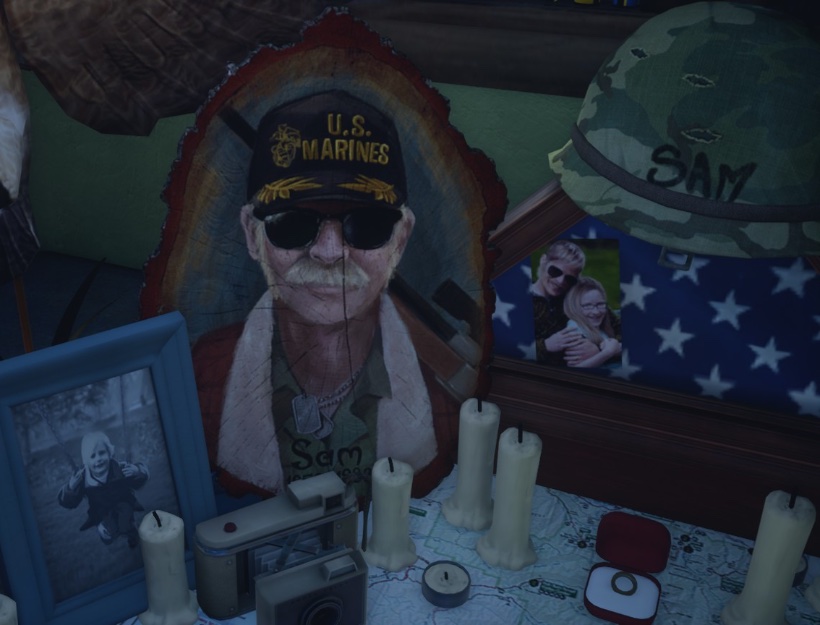 All of the tales are told in different forms. One moment you are listening to a young girl, Molly, speak about wild, fantastical stories of transforming into certain creatures and you play from her perspective, leaping through the trees as a cat and swooshing down from the skies as an owl. The next you are flipping through a comic book following Barbara as she spends a chilling night at home. You guide her through her home and cross various comic panels. With each story you hear of a member of the Finch family and get to experience a unique way of viewing someone’s final moments. With each letter, poem or even a legal document you read, you sense the tragedy and feelings that surrounded that death.

As you continue along you learn thanks to Edith’s narration of the supposed family curse and her own feelings on it. When you first start the game you may think that there is no such thing as a curse but with each step forward you start to question that assumption. Is this family truly cursed to die before their time? Or is it simply that they believe too deeply in the family curse and that it has become a self-fulfilling prophecy? Edith ponders this along with you as she focuses heavily on two family members’ views on the subject. Her mother, someone who firmly didn’t believe in the curse yet still ran away as far as she could from the family home, and Edie, Edith’s great grandmother who strongly believes in the curse and that the history of this family should be preserved. This is where the theme of mortality really shines in What Remains of Edith Finch, asking the player to do something that not many games or other mediums touch: focus on death and the questions that come with it. The game throws you into a raw, emotional journey, making you step away from the normalcy of life and focus on the questions of life, death and family. 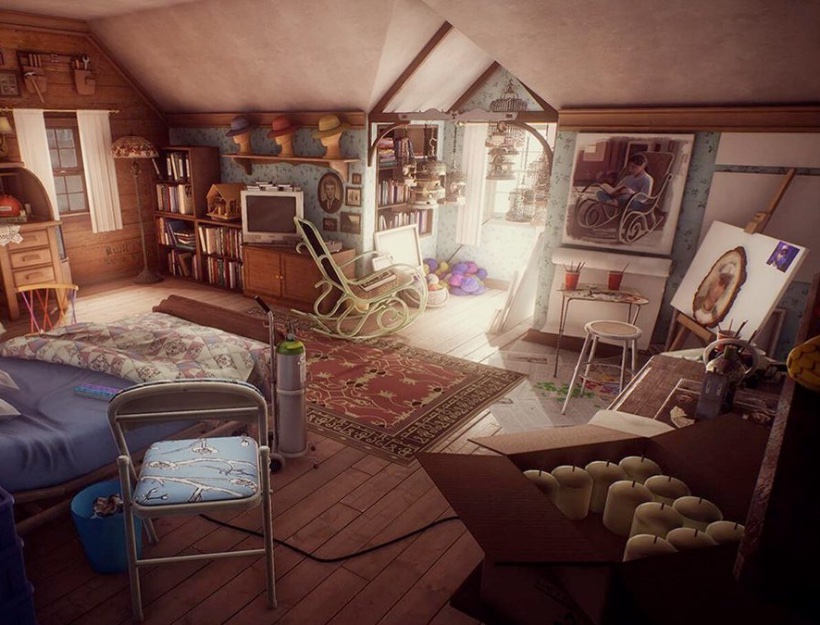 What Remains of Edith Finch is a beautiful, thought-provoking, emotionally driven indie game that I would highly recommend both for people who have played games before and those who haven’t. It is not a light-hearted or fluffy story but a raw, bittersweet and beautiful tale. As you journey through the bizarre house, steeped in the history of this family and their final moments, you will find yourself struck by the themes and will remember the Finch family and their tales long after you place down the controller.

If you are interested in playing this game, it is available on Nintendo Switch, iOS, Windows, Xbox One and Playstation 4. In fact, you can pick up this wonderful indie title for just six dollars on the Playstation store until the twentieth of this October. The Finch house is waiting for you to experience the stories it has to tell. All you need to do is pick up the controller and be transferred into this hauntingly beautiful two hour tale.
* 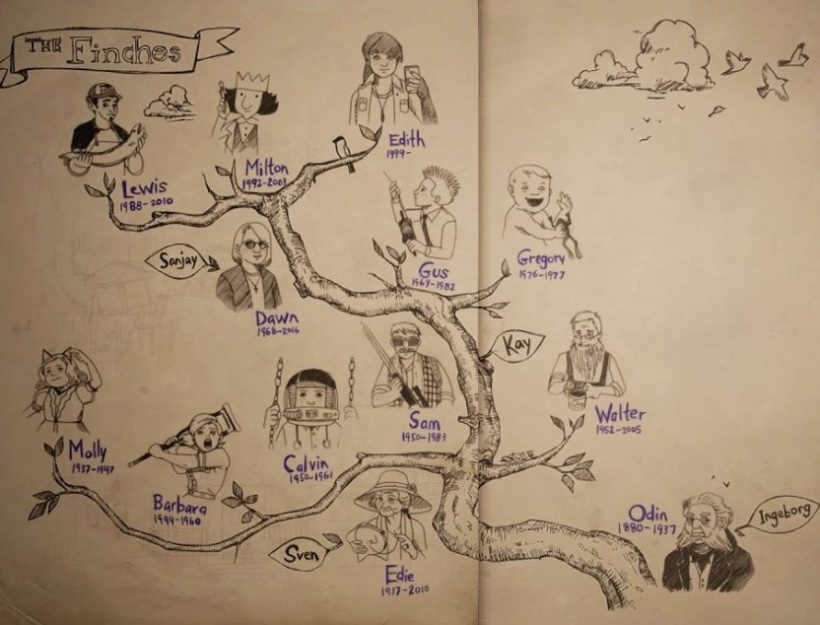