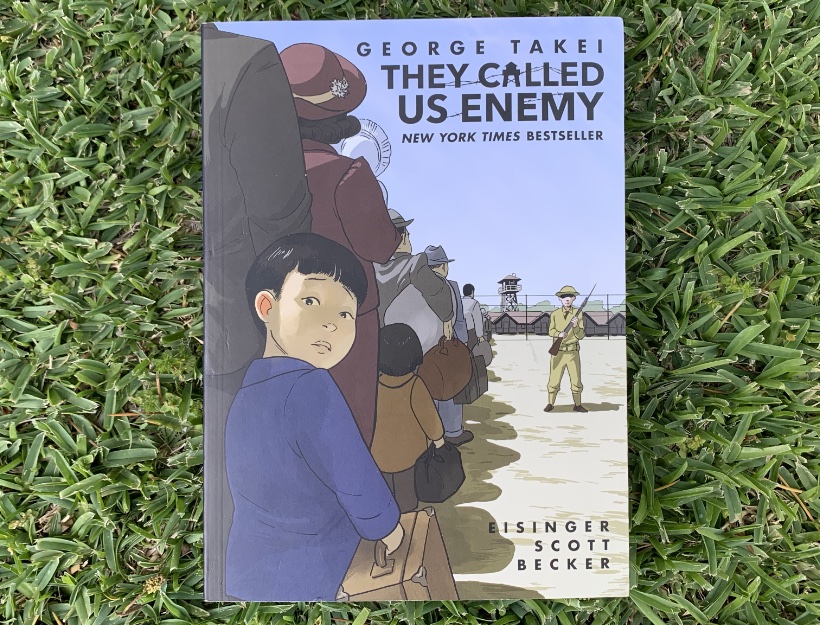 A few years ago, my family stopped to visit Manzanar on our way back home from a trip to Mammoth. It was an impromptu visit but one I shall always remember. Manzanar was one of ten internment camps created during WWII to imprison over 110,000 men, woman and children of Japanese descent who were feared for their race. Today the camp that was at one time surrounded by a barbed wire fence and patrolled by armed men in watchtowers is now open to the public. I walked around with my mother and sisters and was stunned to see how bleak the living conditions had been for those in the camps and how little I had ever heard of their story. At the same time, I was blown away by the beauty that the residents had infused into their surroundings, building parks and gardens in the midst of a barren wasteland. The contrast between the depths of human hatred and the heights of the human spirit is something I will never forget.

The same strange contrast between despair and joy can be found within the pages of They Called Us Enemy. George Takei was four years old when he and his family were forced out of their home with only minutes to grab any belongings they could carry with them. Takei is best known for his role as Sulu on Star Trek, but in They Called Us Enemy he tells his own story for the world to hear. When we learn of American history, we are often taught to focus on the times America “got it right”. Fighting for freedom in the Revolutionary War, keeping the country united and abolishing slavery through the Civil War, fighting Nazis in WWII. There was nothing “right” or “good” about the internment camps though. They are an example of how strongly a nation can turn against its own morals in the name of fear and paranoia, and they must not be forgotten lest we find ourselves falling into the same patterns that led to them in the first place. 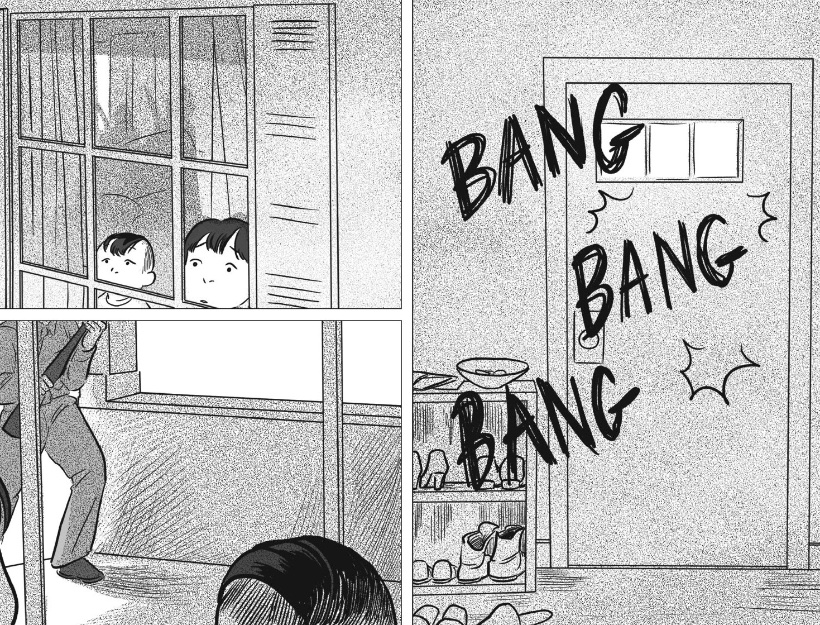 They Called Us Enemy is an easy read, one that can be done in a single sitting. At the same time, the story contained within its pages, the charming, approachable art style by Harmony Becker  and the thought-provoking lines crafted by Eisinger, Scott and Takei will cause you to take pause and appreciate the gravity or joy which each moment brings. To be able to see the events unfold through the eyes and perception of a child gives the graphic novel an ever-present interplay of wonder amidst the tragedy. Takei tells the events of his life as he understood them as a young boy but also intermingles the insight and awareness that he gained later on in life when looking back upon what had happened. A train ride that at the time had seemed like an exciting trip to what his father had told him would be a vacation now looks different in his memory for the grief and fear upon the passengers’ faces that had confused him at the time is now painfully understood.

Takei does an excellent job throughout the story of presenting multiple viewpoints. He not only relays the narrative through his own eyes and his later understanding of his parents’ suffering, but also expands beyond his family unit, examining and seeking to understand the decisions of other Japanese Americans who lived amongst them and even exploring the perspectives of the very men who locked them up. The story is eloquent and insightful in its explorations of the human psyche both in what motivated the injustices that the American government perpetrated and the responses the myriad of responses the imprisoned Japanese gave to this treatment. The Japanese American population is not treated as a monolith but rather as a community of diverse individuals who each made their decisions thoughtfully and with conviction. 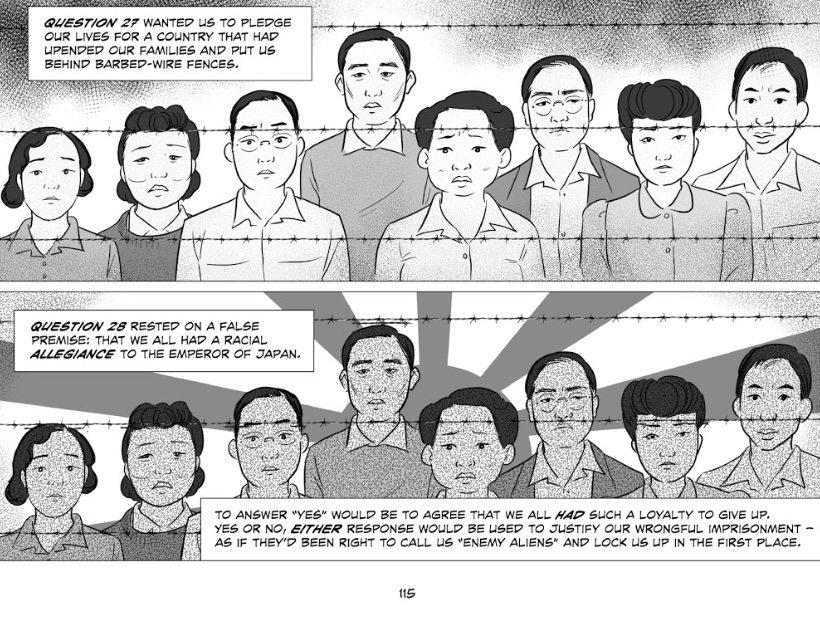 A particularly poignant moment within the novel where I found Takei’s wisdom particularly striking was in how he handled the matter of the loyalty questionnaire. All individuals above the age of 17 within the camps had to answer a list of questions designed by the American government to determine their loyalty. A key pair of questions asked each individual to pledge loyalty and service to America and its army and to forswear allegiance to the Japanese emperor. Takei’s parents, in a conscientious objection to the hypocrisy within the very nature of the questions, answered “no” to both and were labelled as disloyals by the American government. While Takei proudly stands by the decision of his parents, he also celebrated the military service and sacrifices made by those who responded “yes” to the two questions. In exploring both sides, Takei showed that though they gave opposite answers to the same questions, all chose out of a desire to do the right thing and should be equally honored and remembered for their decisions.

One would expect a book with such a grim subject matter written by someone so deeply wronged by his own nation to end on a diatribe against the American government. The wounds inflicted by America’s actions wounded their own citizens with shame and trauma they carried for their entire lives and any sort of official apology or reparations came decades late after half of those imprisoned within the camps had already passed away. Yet this is not a story of lost hope; it is a story of how America can be the very ideal its constitution and laws seek to uphold: a land of freedom and equality for all. 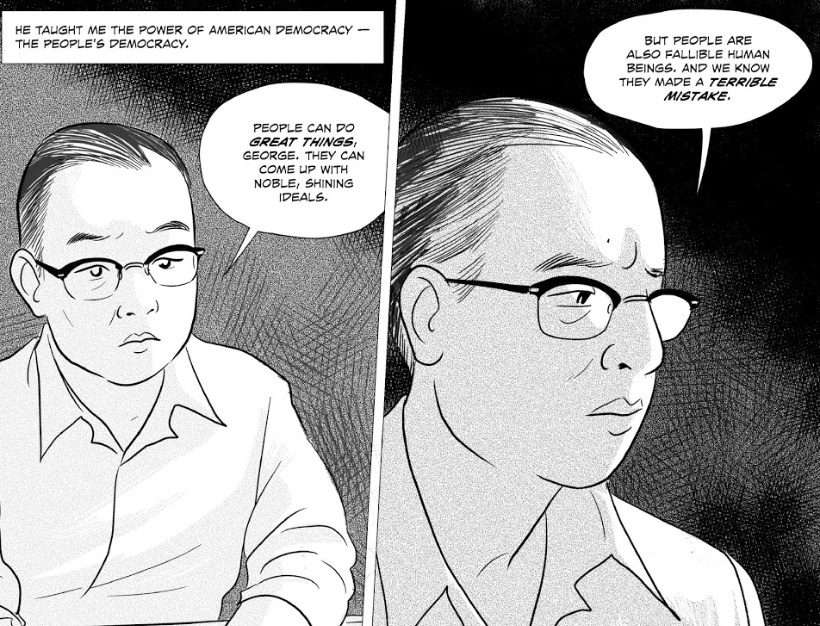 Takei’s father was deeply patriotic even in the face of laws which prevented him from applying for American citizenship. Through the years spent imprisoned in internment camps, he strove to raise his children to understand the importance of democracy and participation within government. Even after all he had gone through, he still believed America could become the nation people dreamed it would be and spent his remaining years volunteering his spare time helping with election campaigns and taking part in the democratic process. His abiding faith in the ability of humans to do good inspired Takei to use his platform to raise awareness of Japanese American history in helping to found the Japanese American National Museum as well as starring in productions that tell the story of the Japanese internment camps such as Allegiance on Broadway and The Terror: Infamy on AMC.

The history of the Japanese internment camps, though it may seem distant through our current lens, still dwells terrifyingly close to modern day life. The first camp Takei was held at, impromptu barracks and sleeping quarters set up within the Santa Anita stables, are within minutes of my home. I drive past those stables on a regular basis every time I go to the mall. The injustices faced by Japanese American citizens are not a issue of the past either. They are paralleled by the rise in Asian hate crimes we see today amidst the pandemic and are mirrored in the atrocities committed at our southern border to immigrants seeking asylum in America. Within its final pages, They Called Us Enemy spells out the reason for its existence: to help us learn from history so we do not fall victim to the vices of fear and hatred once more. We can do better. America can be better. Let us work together to ensure that we may say with conviction that America truly is the land of the free and the home of the brave.