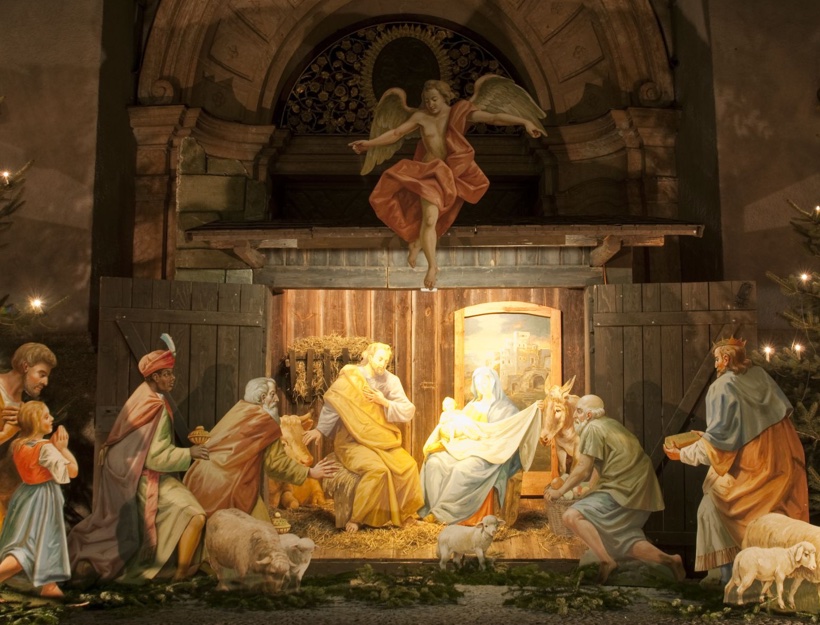 I was not surprised to hear the words “Your bag is overweight,” when checking in for my flight to Chicago to spend Christmas with my family. Inside was packed a large wooden nativity play set for my two-year-old grandson, Ashur. I knew there would be many holiday activities competing for his attention, but I wanted to reinforce the true meaning of Christmas. My plan was to tell Ashur the story bit by bit every day until Christmas Eve when I would describe the  the grand finale of Jesus’ birth in all its supernatural glory.

Last night, Ashur helped me assemble the manger under the Christmas tree. He collected the shepherds and sheep and left them in a pile on an imaginary hillside two feet away to wait for their part in the story that would take place on Christmas Eve. Next, Ashur placed the three wise men on the far side of the family room and laid them face down to ‘sleep.’ After all, they had to travel a great distance and their arrival on the scene wouldn’t take place until Epiphany, January 6. Finally, Ashur carefully carried the figure of baby Jesus in both hands to his hiding place behind the TV cabinet. We were ready to act out the story.

While the Advent candles flickered, the wooden figure of Mary sat alone on the coffee table in the semi-darkness. Ashur held the wooden angel in readiness…

” A long time ago, in the land of Judah,” I began,”There was a young woman named Mary. One day, an angel came to her…”

Ashur flew his angel through the air, swooping it down with a bang in front of Mary.

“Now it’s your turn to tell what the angel said to Mary,” I whispered. “Say, ‘You’re going to have a baby.'”

“His name will be Jesus,” I whispered.

Next, we acted out the scene where Gabriel appeared to Joseph instructing him to take  pregnant Mary as his bride. We ended our reenactment with the figures of Mary and Joseph standing by the fireplace some distance from the manger to begin their long journey from Nazareth to Bethlehem.

As Ashur and I retold the story each day,  Mary and Joseph traveled a little closer to the manger.

Luke tells us that at the time that Mary was due to deliver her baby, she and Joseph were required to travel from Nazareth to Bethlehem to register for a census. I looked up the distance online and found that the two cities were about 100 miles apart, normally a 4 to 5-day journey on foot.

My daughter Ariel, Ashur’s mother,  is 34 weeks pregnant and is uncomfortable walking or standing for any length of time. What a difficult journey this must have been for Mary! Surely it took longer than 5 days for a very-pregnant woman to travel that distance even if she sat on the boney back of a donkey part of the way. Since there were so many travelers, it is likely that the couple had no choice but to sleep on the cold, hard ground night after night. When the family finally arrived in Bethlehem, the only shelter left was a dirty, smelly cave full of mud-caked animals and ripe manure. There Mary gave birth to the Son of God!

This is the real story: earthy, gritty and nothing like the pretty painted manger and figures I provided for my grandson. Why would God choose to bring His Son into the world in such poverty and filth, I wondered? What do I tell Ashur?

When I reflected on the beginning of the story found in the first three chapters of Genesis, it slowly began to make sense. God had created a pristine, perfect paradise of an earth, creating the first humans to keep it a heaven-on-earth kind of place. When Adam and Eve rebelled, sin and death, violence and hate, poverty, sickness and suffering seeped in and grew, becoming the new ‘normal.’ God sent His Son, Jesus, God incarnate in human flesh, “to save his people from their sin.” (Mt. 1:21) Within this context, it seems that Christ’s arrival in a dark, dirty barn was an apt metaphor for the state to which the world and humanity had sunk. Christ’s birth was the beginning of God’s plan to destroy sin through Christ’s death and resurrection and to reestablish the world the way it was always intended to be.

As I anticipate telling Ashur the story through the remainder of the week, it will be through my clearer understanding of the significance of the Christmas Story :“good news of great joy for all people.“
*