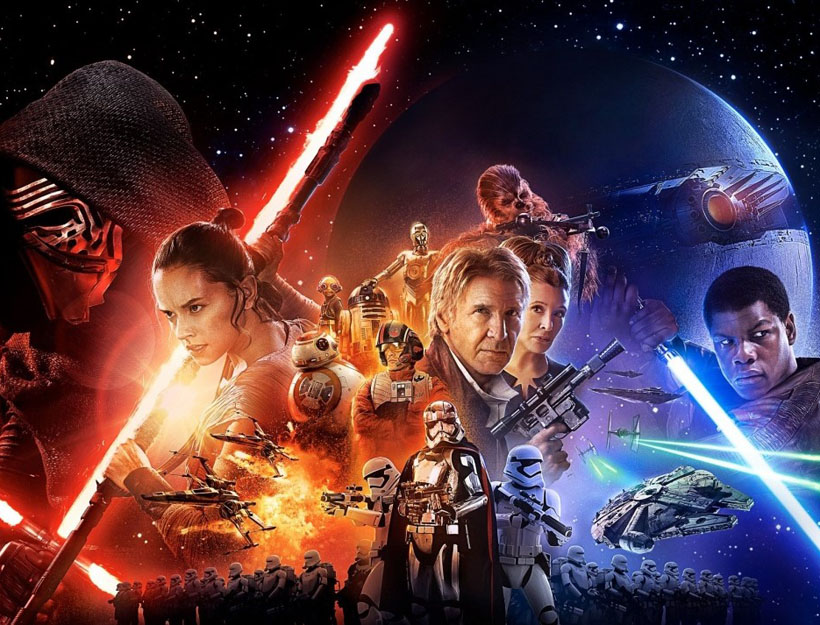 So, Star Wars: Episode VII- The Force Awakens has been out for a few months now. You’ve probably read your fair share of reviews and are wondering why you should bother with this one. You should because, unlike all those other folks, I actually know what I’m talking about. Most reviewers fall under one of two categories: film critics and fanboys. I, on the other hand, am a perfect fusion of the two: an avid Star Wars lover who is also trained in the cinema arts. I’ll try to keep this short (somewhat) by skipping A LOT (some plot points, secondary characters, unnecessary details, etc.). So, without further ado…

WARNING: For those of you who live under a rock and haven’t seen this movie yet, there will be SPOILERS!!!

The Force Awakens is a familiar story, but it is by no means a bad one. After the text scrolls, we pan down on Poe Dameron, a Resistance pilot who is given a map to Luke Skywalker, our hero from the original trilogy who has gone missing. A cadre of Stormtroopers led by the grandson of Darth Vader, Kylo Ren, captures Poe and destroys a village full of innocent people. FN-2187, a Stormtrooper who feels conflicted about serving the First Order (i.e. Empire 2.0), helps Poe escape from certain doom. As their bromance brews, Poe gives FN-2187 the nickname “Finn.” They crash-land on the desert planet Jakku, where fate brings Finn and Rey together. Rey is a young woman who was abandoned by her family when she was a child. As Kylo Ren and the First Order give chase, fate intervenes again as Finn and Rey commandeer the Millennium Falcon and escape. They bump into Han Solo, who becomes a reluctant mentor to both Finn and Rey. Han takes them to Maz Kanata, a short alien woman who introduces Rey to the Force and her destiny. Meanwhile, the First Order’s ultimate weapon, Death Star 3… um… I mean… Starkiller base is revealed; it destroys a bunch of planets and stuff. 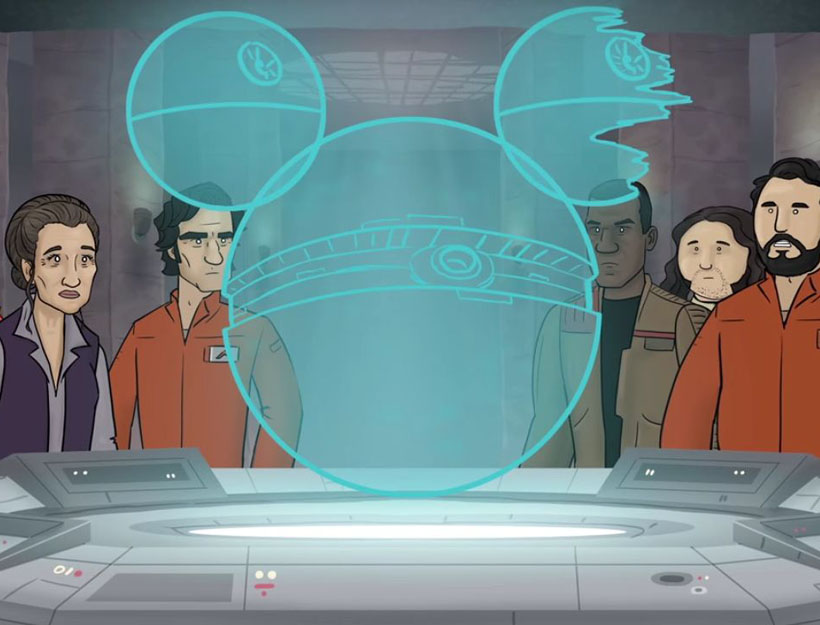 Kylo Ren finally catches up to the heroes, capturing Rey in the process. Finn is forced to join the Resistance to rescue her. In the final climactic battle, there are epic dog fights, lightsaber battles and explosions. Our heroes ultimately triumph, but not before Han Solo is killed by his son, Kylo Ren.

The Force Awakens is a return to form for the franchise. Part of what makes the original trilogy vastly superior to the prequels is the use of dynamic characters and proper story arcs. All of the new main characters feel human: they experience emotions and grow over the course of the movie as they make difficult choices. Finn hates what the First Order represents and tries to run away. Fate forces him to become a hero when Rey is captured and needs rescuing. Rey was a scavenger on a desert planet. She refused to leave, believing that her family would one day return. Fate brings Finn into her life, which is the catalyst for her adventure. She tries to run away from her problems, but her confrontation with Kylo Ren forces her to embrace her Jedi destiny. Speaking of which, Kylo Ren is probably the strongest villain the franchise has seen (from a character arc point of view). 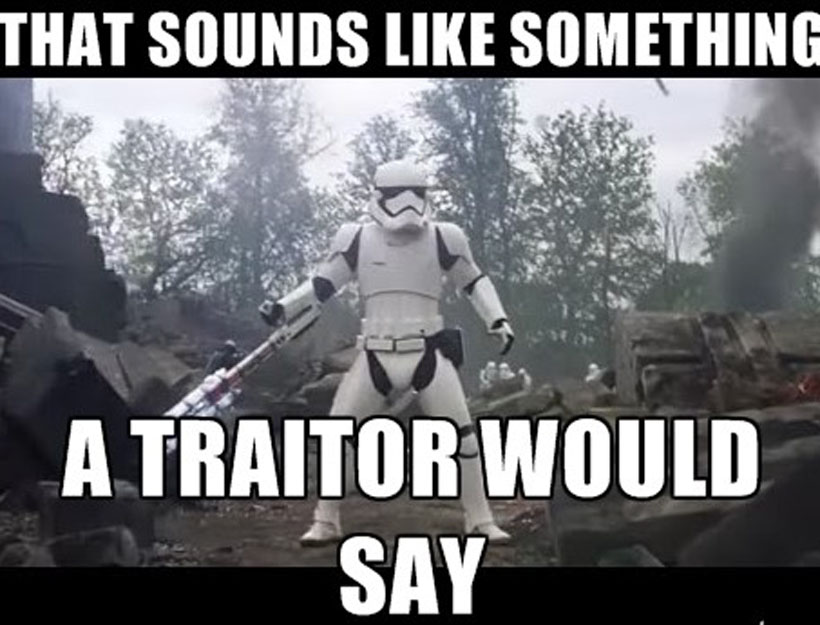 No, seriously. Think about it. In the prequels, none of the villains had a significant arc. Darth Maul, Jango Fett, General Grievous and Count Dooku were all expendable cannon fodder. Even the Emperor, as awesome as he was, was just a bad guy. Darth Vader had a great story arc, transforming from an evil Sith Lord back into his former Jedi self. However, it took three movies for him to get to that point. Kylo Ren expressed a broader range of emotion in one movie than Darth Vader did in three, from being afraid of Rey and her untapped power, to the legitimate sadness he felt for killing his father. With two movies to go, I am very much looking forward to seeing what Adam Driver does with this character. J.J. Abrams was another highlight of this film. His signature directing style is evident throughout, from the occasional lens flare to the use of humor to lighten tense situations. He chose to use practical effects as much as possible, which I am personally a big fan of. CGI effects aren’t bad, in fact sometimes they are necessary, but they never feel real to me. The strength of his directing skills is also evident in the performances he brought out of his actors. Their interactions were natural and fluid, and there was never a dull moment of dialogue.

As much as I enjoyed this movie, it’s not perfect. My biggest gripe was the music; it’s generic and unmemorable. John Williams felt like he was sleep conducting this time around. Normally, there is a least one standout piece in each film, including the prequels, but that didn’t happen this time around. The high-stakes seemed somewhat irrelevant as well. I was especially irked by the fact that a handful of planets blew up and our heroes barely seemed to notice. Everyone was so wrapped up with their own personal drama that a galaxy-wide genocide felt like a blip on the radar. 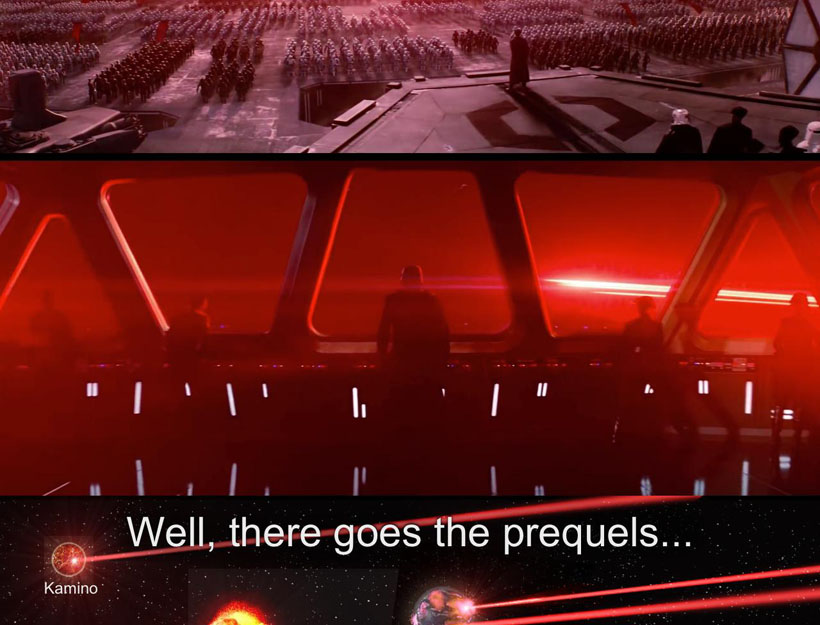 In the final battle, all the drama was on the ground, with all of the relevant characters stealing the spotlight from the major X-wing/Tie Fighter fight that was taking place simultaneously. This creates an imbalance on screen: cutting back and forth between a fight you care about and a fight that’s cool but uneventful.

Yes, the plot borrows heavily from Episode IV: A New Hope: a desert planet, reluctant heroes, a giant death ball, the works. Is that a bad thing, though? George Lucas tried to create a whole new universe for the prequels and he got flak for it because they didn’t look or feel like the originals. J.J. Abrams pays tribute to the originals, and he gets flak for it. See the irony? 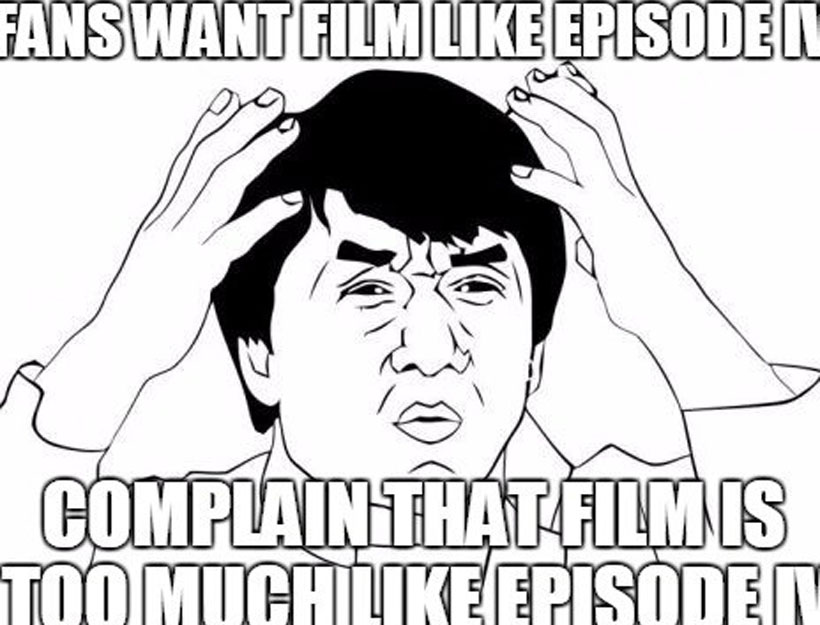 The issue here is that every fanboy has his own fantasy of what the perfect Star Wars movie should be. No two fantasies are the same, and any slight deviation from your own personal fantasy immediately makes it bad. There is no consideration of what’s best for the masses, and in turn, what’s best for the series. Believe me, I’m just as guilty of this as anyone else. Heck, if I had it my way, I would have opened the movie with Boba Fett crawling out of the Sarlacc Pit. He’d dust himself off, say, “I’m coming for you, Solo”, and proceed to go on a Jedi killing spree, because I love Boba Fett and that’s all that matters. There’s nothing wrong with having opinions about the things we love, in fact, it’s our opinions that ultimately drive and keep them alive. However, if our own personal bias is getting in the way of enjoying a good movie, then maybe we need to dial back the crazy just a little bit.

I could ramble on forever, but I’ll spare you my insanity. Yes, J.J. Abrams and Disney played it safe, but can you blame them? It was their first foray into the Star Wars franchise, and they wanted to make sure they covered their bets. Disney literally spent billions securing the rights to this movie, let alone the money they spent on making it and on advertising and fusing the Disney and Star Wars brands. It makes sense that they were cautious. George Lucas tried something new, and the rabid fans ran him out of his own franchise for it. The Force Awakens may be flawed, but it’s still a fun movie to watch. I walked out of the theater with a smile on face. Isn’t that what matters most?
* 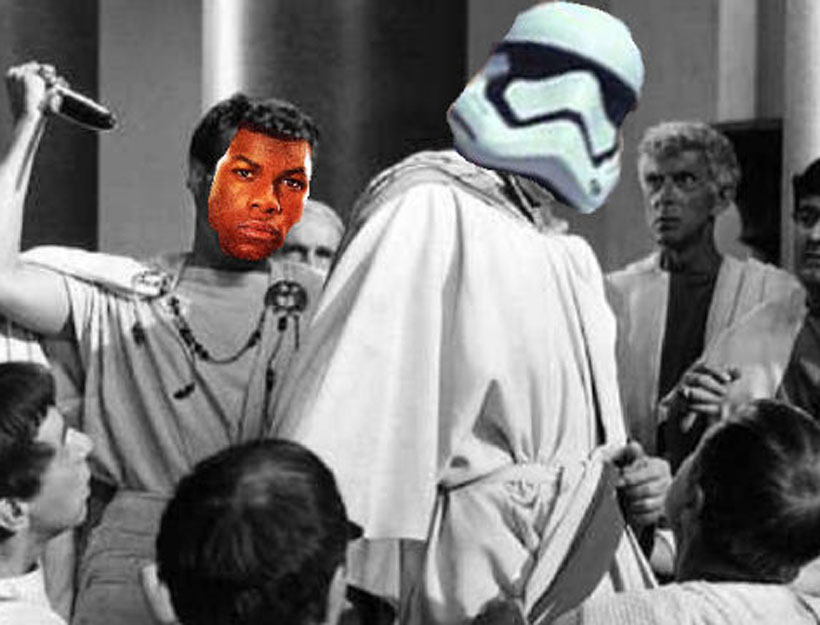