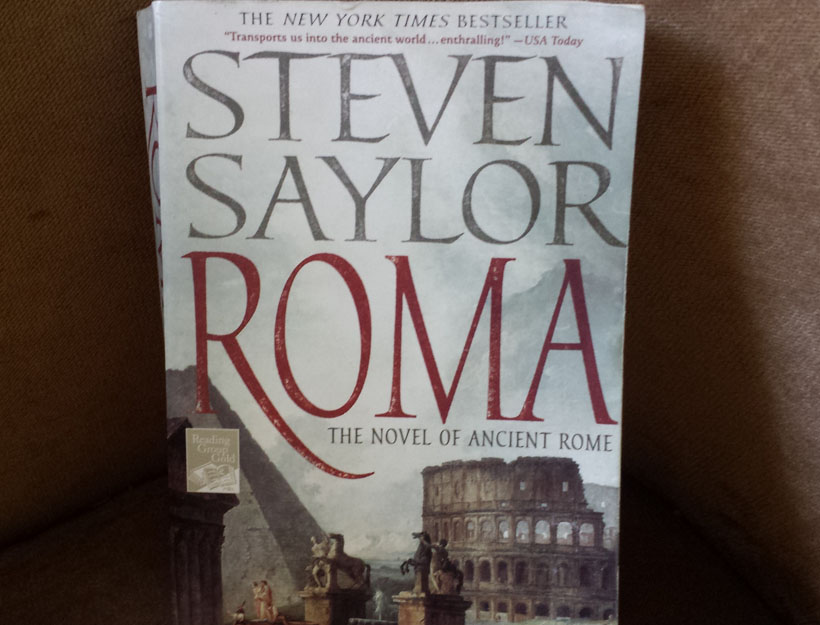 For those who have visited or will visit Rome, Italy, or have an interest in the history of Western civilization, this New York Times Bestseller, “Roma” (2007), could be a book for you! Author Steven Saylor starts at the BEGINNING with Remus and Romulus being raised by the mythical “she-wolf” (prostitute??), and then ultimately bringing about the founding of the powerful once-empire, now capital city of Italy, Rome.

I don’t completely understand the “Anglicization” of other countries’/cities’ names (is there a reason we can’t say “Roma”?), so first off I like that Steven Saylor went with “Roma” instead of Rome for his title. Maybe it’s because I lived in Florence, Italy for three months in 2014 – Florence will always be “Firenzi” to me now : )

As I said, Steven Saylor starts at the beginning (1,000-757 B.C.), and travels all the way through history until 44 B.C., basically ending with the fascinating story of Julius Caesar, Anthony and Cleopatra. Historical spoiler alert if you don’t know – Cleopatra dramatically ends her life with a poisonous asp’s bite. Well, okay, the story continues one bit further with the main character, Lucious, passing the family necklace and talisman down to his grandson… so we know that this family line continues….

There are two reasons I use “could” in regard to describing this book being a good fit for those who are interested in ancient Rome. The first reason is there is a TON of history that Steven Saylor weaves into the story. So much so that at times “Roma” can almost feel like a text book, with a layer of story laid on top of thousands of years of history. In other words, if “too much” history can make you cross-eyed, you should be aware that this read is chock full! The second reason some may not find this book to their taste is that Steven Saylor describes some sexual encounters with what I would call an “R-rated” amount of focus. It amounts to less than a handful of scenes throughout the book, but they are there and I want to give a head’s up!

Otherwise I have to say that on the whole I am glad I read the book. Having studied the amazing story of Italian history in college, and the equally amazing amount of impacting contributions the Italian culture has made to Western civilization, this book succeeded in making that ancient history come alive in a readable way.

Steven Saylor has one other book as a pair with Roma: “Empire: The Novel of Imperial Rome” (2010), and also has authored twelve other books about ancient Rome in series called the Roma Sub Rosa Novels. The Sub Rosa novels were written between 1991 and 2015.

“Legend is historical. Just as history is legendary.” – a quote that Steven Saylor cites from Alexandre Grandazzi, The Foundation of Rome.
*