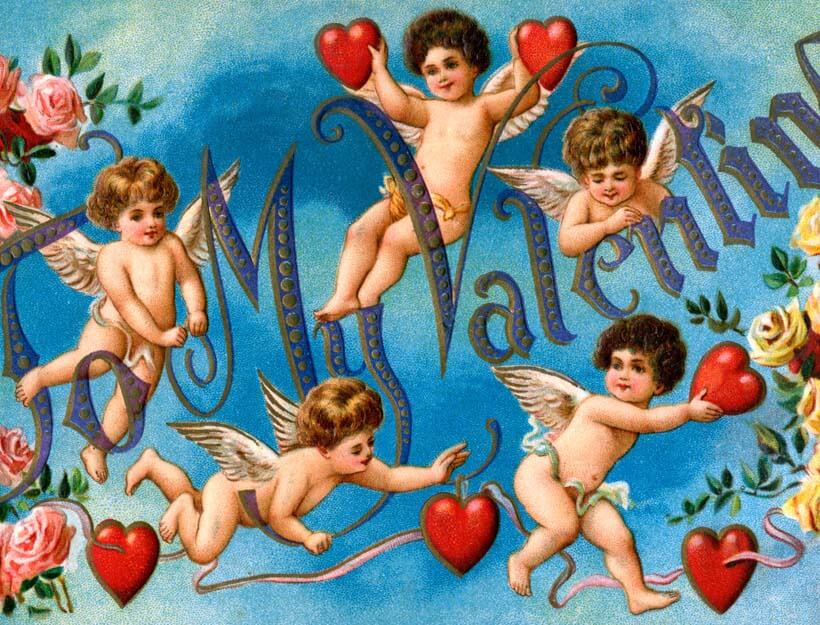 Roses, chocolate, candle-lit dinners and Valentine cards are part of the language and practice of friends and lovers on St. Valentine’s Day. The holiday of love and romance was not originally associated with these sentiments, nor were the paper cards widely exchanged on February 14th always loving.

There are numerous theories concerning the origins of the mid-February holiday known as St. Valentine’s Day.

Some trace its birth to an ancient Roman fertility festival known as Lupercalia celebrated between February 13 through 15. Observance of Lupercalia involved the sacrifice of dogs and goats whose bloody skins were used by males to whip the local ladies who lined up for the privilege, which was believed to convey fertility in the coming year.

The more commonly held theory is that  St. Valentine’s Day originated with a Christian saint named Valentine (or Valentinus in Latin). Valentinus was a common name for males during the Roman Empire. Of the  50 who have been linked with the onset of the holiday, two religious officials from the 3rd century seem the most likely heroes: a Roman priest and the Bishop of Termi. Religion professor Bruce Forbes explains that the nearly parallel details of these two men’s lives suggest that they may indeed be one and the same individual.

The Story of Saint Valentinus of Rome

According to the Golden Legend: Reading on the Saints, Saint Valentine was a well-loved Roman priest living during the reign of the emperor Claudius. Valentinus’ refusal to worship the Roman gods led to his arrest and appearance before the emperor. Claudius demanded to know why the priest chose to rebel against the law. “Truly Christ alone is God! If you will believe in him, your soul will be saved, the empire will prosper, and you will be granted victory from your enemies,” responded the courageous churchman. A prefect of the court became concerned about Valentinus’ persuasive speech, accusing him before all present of leading the emperor astray. Claudius ordered the priest to remain in custody and placed him under house arrest under the interfering prefect.

Now this Roman prefect had a daughter who was blind. During a conversation about the Christian religion, he asked Valentine to prove his God’s power by healing his young daughter’s blindness. Valentine laid his hands over the girl’s eyes and her vision was restored. The prefect and his entire household turned to Christ and were baptized into the Christian faith.

Sometime later, Claudius ordered that the noble priest be tortured and beheaded. Before his execution, it is said that Valentine left a note for the young girl.  It was signed, “From Your Valentine.”

Valentine was decapitated outside Rome’s Flaminian Gate on February 14, 269 AD and was buried in the Catacombs of San Valentino except for his skull, which remains on display at the Basilica of Santa Maria in Cosmedin wreathed in a crown of red flowers. The popularity of the saint and his feast day has resulted in his relics being claimed and displayed in churches throughout Europe.

Geoffrey Chaucer: Father of the Holiday of Love

It would be many hundreds of years before The Feast Day of Saint Valentine transitioned from a death memorial to a day devoted to romantic love. The 14th century English poet Geoffrey Chaucer is responsible for this shift in theme. Influenced by the medieval concept of chivalry, Chaucer composed a poem in 1375 that associated Valentine’s Day with the time when the birds and humans seek to find their mates. From this time on, Valentine’s Day has been inexorably linked with love and romance.

The Origin of the Valentine Card

Sending hand-written messages of love to one’s beloved began in the 15th century. The oldest existing valentine is a poem that Charles, Duke of Orleans, penned in 1415 to his wife while a prisoner in the Tower of London. It is housed in the British Library in London. Sending handmade Valentine’s Day cards on February 14th gained popularity in Europe. By the Victorian Era, sending valentines on this date was the accepted custom in England. There, lacy, elaborate, and expensive Valentine cards were widely produced, purchased and distributed. In 1835, approximately 160,00 Valentine cards were sent in England despite the high cost of both cards and postage.

The custom of exchanging Valentines was somewhat common in America during the 1800s, but  these cards were known as ‘Vinegar Valentines’ or ‘Penny Dreadfuls.’ They earned these nicknames because they did not bear the sweet sentiments of love sent to a beloved, but were cards expressing insults sent anonymously, intended to cause the recipient to feel dreadful. A card created to make fun of an old maid read:

“’Tis all in vain your simpering looks,

You never can incline,

With all your bustles, stays and curls,

To find a Valentine.”

Widely manufactured during the 19th and 20th centuries, Vinegar Valentines were made of cheap paper, included a cartoon or caricature illustration, were inscribed with a mean-spirited verse, and originally cost one penny, though later the cost rose to five cents.

Esther Howland was a recent graduate from Mount Holyoke Female Seminary when in 1847 she caught sight of a Valentine card from England. Inspired by the card’s exquisite beauty and loving sentiments, Howland was determined to produce cards of comparable quality at less expense. She created 12 designs and sent them off with her brother who was a salesman for their father’s stationary business in Worcester, MA. When he returned with $5,000 worth of orders, Esther set up her workshop in a third floor bedroom of the family home. She hired local girls and set up an assembly line system of card production. By 1850, Howland’s Valentines earned $100,000, the equivalent of $3,000,000 today. Esther joined forces with Edward Taft in 1879 to create the New England Valentine Company. This new venture was destined to become the largest greeting card company in the world.

Esther Howland retired from card production when she was 53 in order to care for her ailing father. Her success in transforming the Valentine Card industry has earned her the title Mother of the American Valentine. American Studies expert Barry Shank attributes Esther Howland for creating the nation’s best visual correlative for the words “I Love You”.