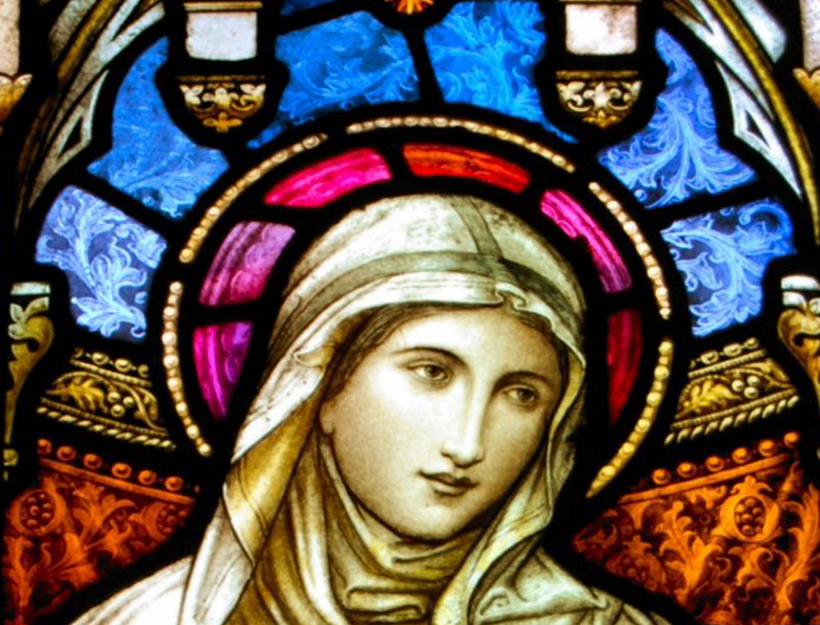 Saint Brigid of Kildare, one of Ireland’s three patron saints.

Saint Brigid of Kildare is one of the three patron saints of Ireland and may be the most beloved. This 5th century saint is best known for founding the monastery at Kildare, a double monastery housing both men and women. A woman abbess who ruled over men was rare, and only a remarkable woman could achieve this feat. Brigid’s monastery at Kildare would become one of the three largest and most powerful monastic cities on Irish soil.

Mary of the Gaels

In her homeland, Saint Brigid is claimed as the patroness of dairymaids, cattle, midwives, nuns, newborn babies, brewing, cooking, and the kitchen. Referred to as Brigid, Brigit, Briget, Brid and Bride, the saint is also known as ‘Mary of the Gaels’, the Irish equivalent to the Virgin Mary. And like the Virgin, Brigid is regarded as a model of female virtue and an inspiration for women.

The cult of Saint Brigid spread to Britain, France, Germany, Switzerland, Italy, Belgium and as far east as Russia. During the age of chivalry, knights adopted Brigid as their patroness and borrowed her name for the damsels they escorted to the altar. Germany and Wales revere Brigid as the protectress of travelers and pilgrims. Brigid is known as Saint Ffraid in Wales, where it is customary to pray to the saint before embarking upon a journey.

Despite 1500 years of faithful devotion to the cult of Saint Brigid, facts about her life continue to elude historians. It is as if the real Brigid has evaporated into the thick fog of myth and legend. Discovering the real Saint Brigid is particularly challenging because the events of her life are closely intertwined with the myth of the goddess who shared her name. In the midst of this confusion, some wonder if Saint Brigid never existed.

The fertility goddess Brigid was an important deity among the early Celts. Thought to dwell among the sacred oaks at Kildare, the Celts held an annual celebration to invoke the nurturing mother and goddess of light, fire and healing to bless them with abundant crops and multiple cattle.

During the 5th century, an important transition was taking place in Ireland. The pious Celts were gradually replacing the old religion with the new light of Christianity. Within this process, it was common to integrate elements of early pagan religion with that of the new faith. It was at this pivotal moment in Irish history that Saint Brigid emerged. Since Brigit shared the name and the same home turf with the goddess, over time many characteristics and religious traditions associated with the former were transferred to the saint. For instance, a perpetual flame was tended night and day at the pagan shrine in Kildare, a practice that was continued by the nuns who followed. In addition, the date of the Celtic fertility festival of Imbolc, February 1st, when the goddess was invoked was adopted as Saint Brigit’s Day, the time when Saint Brigid of Kildare is venerated. Noteworthy female virtues and supernatural powers once ascribed to the goddess were also attributed to the saint.

Searching for the real Brigid is further complicated by the fanciful biographies that were written about her. The first Life of Saint Brigid was written by Cogitosus in 650 AD, one hundred years after the saint’s death. It included few details about the saint’s life, but was instead filled with miracle stories and legends. This Life was commissioned by Kildare Abbey not to preserve the true life story of Brigid, but to prove that their saint and her monastery was superior to that of Patrick’s monastery at Armagh. Despite the lack of factual material in this and the subsequent early Lives of Saint Brigid, evidence of this remarkable woman continues to shimmer and inspire.

A Probable Life of Saint Brigid

The recent publication Saint Brigid of Kildare: Life, Legend, and Cult is an excellent resource for discovering the real Saint Brigid. Author Noel Kissane sifts through historical records, the fanciful Lives, folklore and legends to piece together a reasonable summary of the life of this beloved saint.

Saint Brigit was likely born between 451 and 455 AD. Although Faughart, County Louth, claims to be her birthplace, it is more likely that she was born at Fotharta Airbrech near Croghan Hill, County Offaly near the Kildare border. She was the illegitimate child of Dubthach, a Celtic prince and military general.

Brigid’s mother, a slave named Briocsech (Brocessa) is thought to have become a Christian and may have raised her daughter in the Christian faith under the supervision of Bishop MacCaille, a nephew of Saint Patrick who founded an early church at the base of Croghan Hill. Another theory is that young Brigid served as a priestess at the shrine of the goddess in Kildare before she and her mother were converted through the ministry of Bishop McCaille.

Brigid is believed to have taken the veil as a nun in about 468 AD. At this early stage of the Christian church, there were no religious houses for women. She founded Ireland’s first convent in 480 AD at the site of the former shrine of the goddess Brigite and renamed it Cill Dara, meaning ‘church of the oak’. 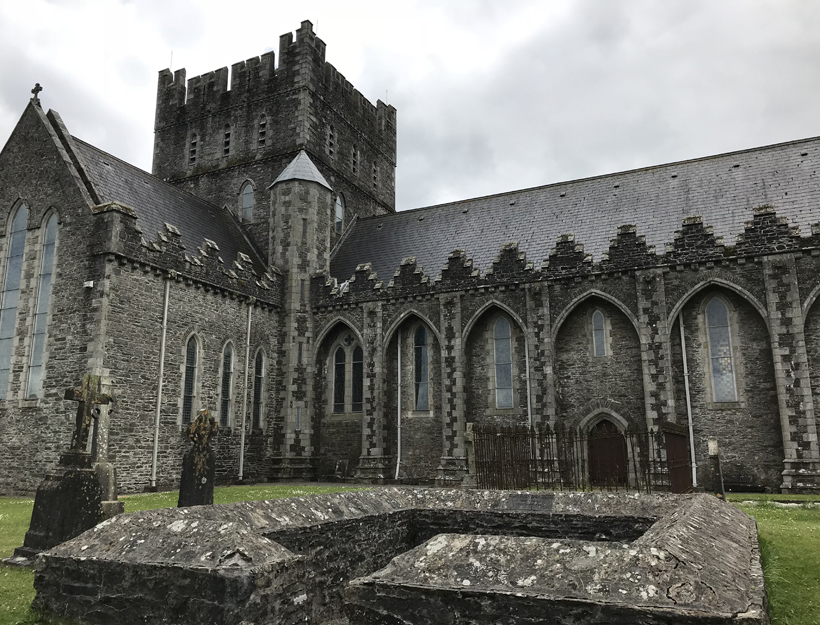 Brigid’s reputation for holiness, wisdom, generosity to the poor, and good management drew hungry souls to Kildare like bees to honey. The convent expanded into a monastery that housed both men and women. Brigid invited the hermit Conleth to assist her in administering the monastery and to consecrate its priests and churches. Saint Brigid eventually added a metal workshop and a scriptorium to the monastic community.

When Brigid died between 521 and 525 AD, her remains were buried next to the altar in a gold and silver shrine embedded with jewels. Conleth was enshrined on the other side of the altar. Housing the relics of two saints greatly increased Kildare’s importance, drawing hoards of pilgrims. The monastery’s population steadily increased until it reached the status of a monastic city.

The first of fifteen Viking Raids were made on Kildare in 835 AD. Before the marauders looted her costly shrine, the relics of Saint Brigid were removed and transported to Downpatrick in Northern Ireland where they joined those of Saint Patrick. The monastery was rebuilt with stone and the ruins repaired after each assault, while the eternal flame honoring the saint continued to blaze until 1223.

Modern-day pilgrims can witness the legacy of Saint Brigid at Kildare by visiting the12th century cathedral, a round tower, monastic ruins, and Saint Brigid’s Well. Kildare’s visitor center offers a short film about the saint and the history of the area. Nearby, the Solas Bhride Center, a Christian Spirituality Center run by Brigantine nuns, keeps Saint Brigid’s flame and her legacy alive. 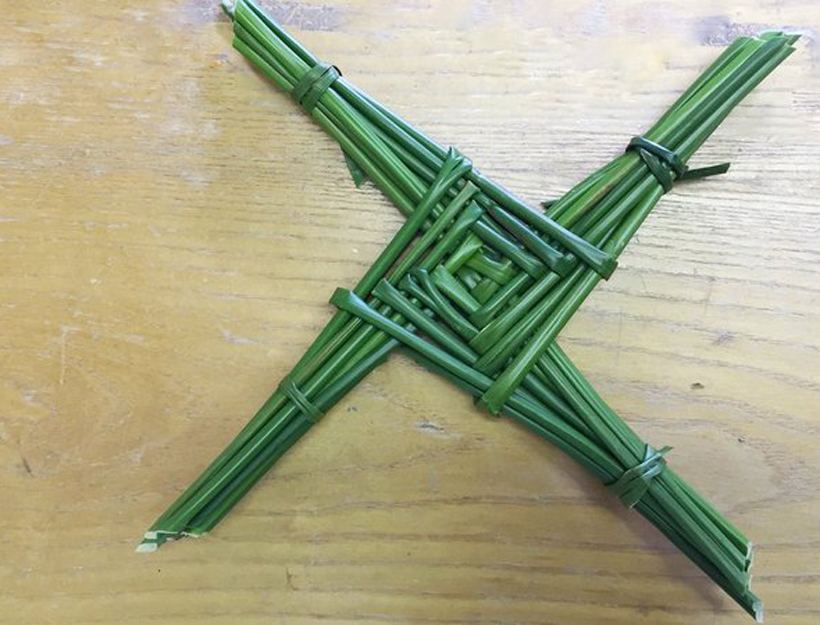 In Kildare and throughout Ireland, Saint Brigid is celebrated on her feast day, Feb. 1. On the Eve of Saint Brigid’s Day, it is customary to weave a cross out of reeds as Brigid is reputed to have done so long ago.

The story behind the cross is that while Brigid was visiting a dying chieftain, she picked up some rushes from the floor and wove them into the shape of the cross in order to explain the story of Christ’s death on the cross and resurrection. Upon hearing the story, it is said the dying man committed his soul to the One True God.

Once a new cross is woven, it is then placed over the front door inside the house. The Celtic saints started a tradition of hallowing places by marking them with a cross. The reed cross is also thought to protect the house from fire and famine.

The words below are the type of prayer that would be uttered with the hanging of the cross:

Brigid of the Mantle, encompass us,

Lady of the Lambs, protect us,

Keeper of the Hearth, kindle us.

Beneath your mantle, gather us,

And restore us to memory.

Mothers of our mother, Foremothers strong.

Guide our hands in yours,

Remind us how to kindle the hearth.

To keep it bright, to preserve the flame.

Your hands upon ours, Our hands within yours,

To kindle the light, Both day and night.

The Mantle of Brigid about us,

The Memory of Brigid within us,

The Protection of Brigid keeping us

From harm, from ignorance, from heartlessness.

This day and night,

From dawn till dark, From dark till dawn.