“Wakanda Forever” sounds good. But, where I’m from–Town Bizness is what the Eastside of the Bay is about– in the most Gold Blooded way.

Warriors had just won the NBA championship. The franchise’s fourth in the last 8 years. The team first in their new waterfront arena in The City.

Setting the table for a weekend — unlike any other. In fact, I doubt it could be reconstructed.

The whole Bay was feeling itself.

I was too. BUT, Wakanda is fantastical. The Bay is real.

‘Popping my P’s cause I’m laced with game. Nothin’ but the Yay flowing through my vein’ ~ Earl Stevens

It’s June. This time the family is heading up north. To what should be a safe harbor. A native homecoming. A native tongue. AND, native dialect. YADIDAMEAN.

I was in town to screen my documentary Zinzun A Revolutionary Activist at the San Francisco Black Film Festival. Later that evening, my wife and I attended the Black Food & Wine Experience in Downtown Oakland. Sunday was Juneteenth and Father’s Day.

Three days in the San Francisco Oakland area and a quick slide through the coldest city in the Eastbay — Richmond. It was a reconnection to the soil. First-time readers, YES — I periodically code switch in my columns,  Soil is the Turf…

At this point in the early summer, I had logged over 15,000 miles traveling back and forth to Buffalo, NY embedded on another writing assignment, a lot of muddy coffee, and cramped red eye flights, an assignment that at times felt like a wartime field combat reporter on the front lines.

In the last few weeks, I’d been splashed by the mighty Niagara Falls on the US-Canadian border. I got pricked by a thorn on a Joshua Tree in the Palm Desert.

Next up was a return trip home.

Now looking at the familiar water of Lake Merritt, I gaze off at the horizon and I can see the place where I took my first breath at Kaiser hospital. The Lake (no one fully pronounces its full name) is where we both said “I do” 23 years ago.

But before we could retreat to the adult activities, we took the kids to the location where we met. We placed them into the space and scene where both their names were inspired.

Lunch at the best burger joint — ever. Red Onion on San Pablo, in El Cerrito, has been around for over 40 years. Same glass pie display case. Same Coca Cola wallpaper. You can’t convince me that they aren’t still using the same milkshake maker from three decades ago. The same sounds of the BART Train’s unmistakable electric third rail metal wheels screeching overhead on the elevated tracks.

As a kid, this burger stand was a treat. Most people tout Nation’s Giant Burger as the go-to, but those who know swear by the double thick slices of cheese and the tiny counter spot is the best of the best.

The unseasonal late spring warmth, clear skies and increasing breeze were precursors for the late afternoon fog that usually rolls in blanketing the city.

As a general rule, especially if you’re not from the Bay, you never leave home without a jacket. Sunny days are common but atmospheric moisture is always lurking out beyond the Golden Gate Bridge in the Pacific Ocean.

It appeared as though ‘The Mack God’ was showing us some favor on this odyssey. This weekend, we had a hedge of protection from the region’s signature thick advection.

A weekend with a ‘Mood of militancy’ and an all-access pass to fully exercise my Black privilege. My wify is a dime piece and Bad & Boujee.

As with any good story, or at least the ones I’ve penned here in Culture Honey, there’s no plot twist of traveling while Black. Or paying the Black Tax as an urban explorer.

I could assume some traveling liberties. No need to be too concerned about blending in. Walking into the hotel — it’s assumed we are guests. 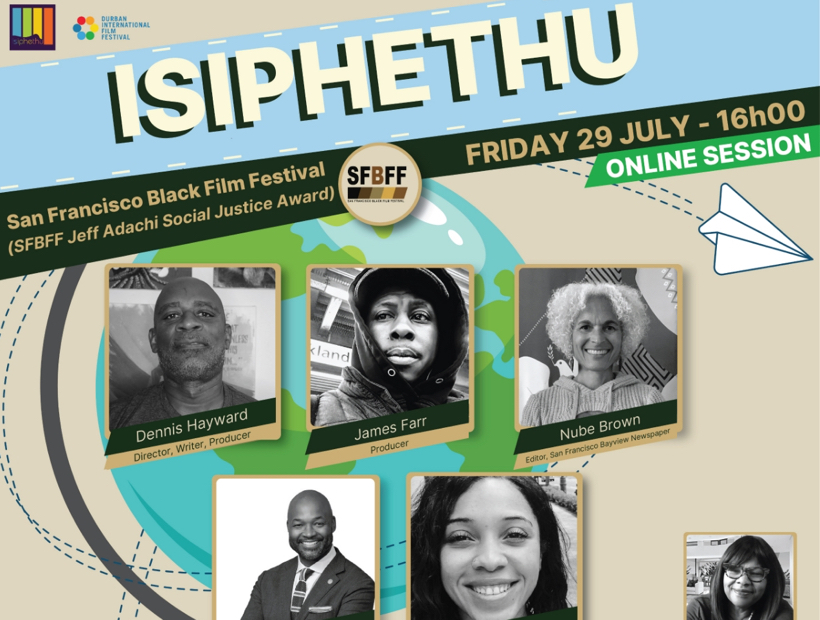 I’d just left the San Francisco Black Film Festival.  Not empty-handed — either.  My film was awarded the best Social Justice Award Feature film. That included an invitation for the film to be featured at the Durban International Film Festival the following month.

All gas and no breaks. I was feelin myself.

The Bay has changed. Gentrification has parts of Oakland feeling like what the Dumbo section of Brooklyn has become to Manhattan. An overnight stay at The Moxy–one of a few new boutique hotels- convinced me of it.

Places like Ghost Town now boast a brewery. The bottom has welcomed people that when I was a teen you’d never see casually walking and jogging on what is now known as Mandela Parkway. A bistro has popped up touting variations of Mac & Cheese – anchoring the block with a line of customers out the door reminiscent of Flint’s BBQ.

The tech migration from the Silicon Valley and SF hipsters has filled downtown’s Broadway St. Lofts and newer high-rise luxury apartments and condos are expanding the skyline.

The area has become more known as the home of super predators like BBQ Becky’s roaming the streets and parks. The Beck’s are far more dangerous than the junkies.

But Oakland is still Oakland. It’s the soul of the Bay. Returning this time meant catching up with Chef Mimi at her 5th Annual Black Food and Wine Experience.

Recently introduced by Wine Enthusiast Future Top 40 Tastemakers and Innovators, Chef Amina Robinson has been on the culinary scene for over two decades.  I won’t tell her age. But she and I go as far back as high school. 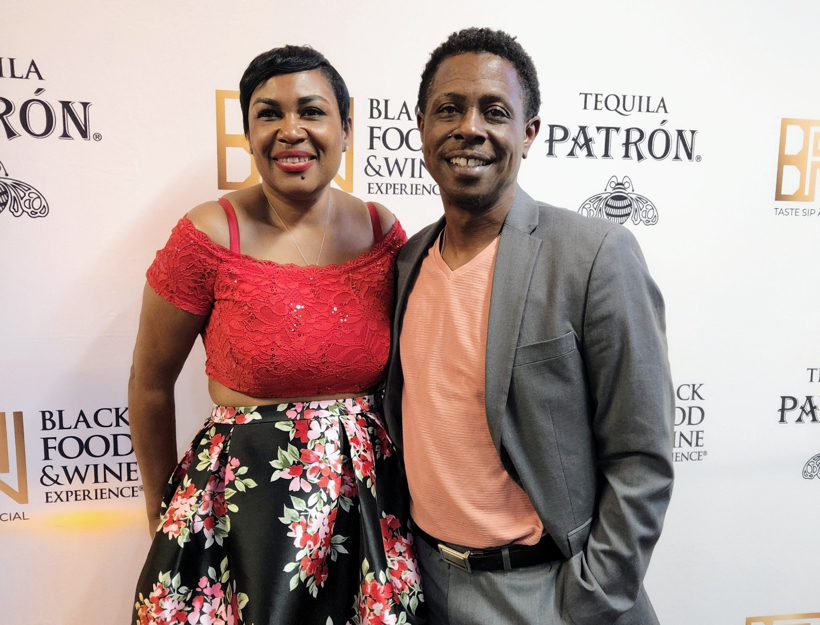 I promised her I wouldn’t tell about our Winter Ball double date. Or pull photos of her rockin a Salt-n- Pepa asymmetrical Haircut.

Five years ago, I interviewed Mimi on Conversation Live shortly after the BFWE inaugural foodie extravaganza.

I was curious about exactly what to expect at her event.

“It’s like a food social,” Chef Mimi told me in our 2017 interview.  “You come, everything is already pre-paid for. You get to try wine from different Black wine Vinters.”

Fast forward, after experiencing attendance growth for three straight years, the pandemic hit. Restaurants and live events, along with the overall hospitality industry were hit first and hardest. Her momentum had stalled. Efforts to get herself financed and produce a cooking show Bring It To The Table a home on a network were being exhausted.

I’d last seen her when she and her brother stopped by my home while in So Cal following the passing of their father.

Since then, on March 14, 2017, her 18-year-old son was the victim to community gun violence. 45 minutes after having dinner, Sultan was fatally wounded while sitting in a car in North Oakland.

So much life had happened in between that time and both of us were continuing on our paths. So, to say the least, I was excited to see her and explore the event.

If Black Excellence were an event — BFWE was most definitely the location. 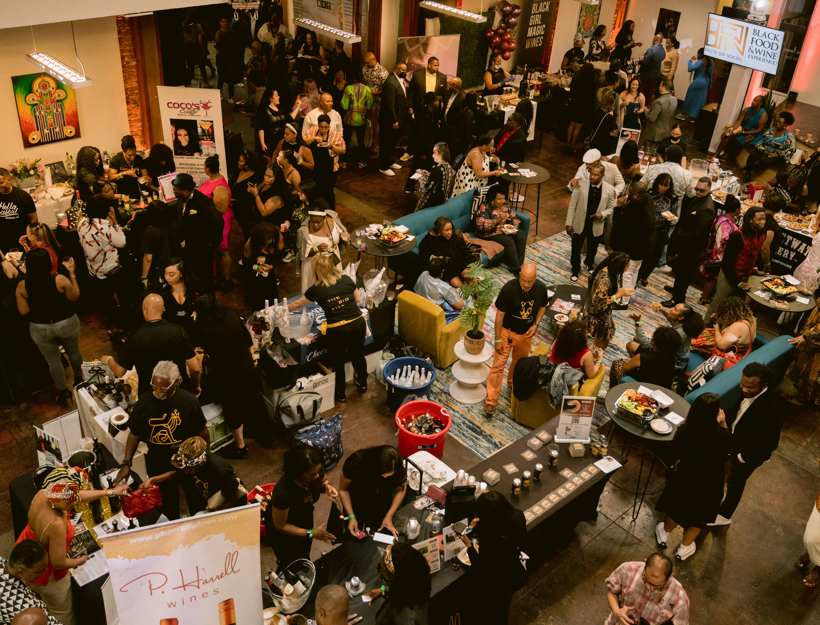 Earlier we established that Wakanda is a fictional place. But, if Wakanda endeavors to host a taste of soul foodie experience, Coogler and the Marvel writers could use what Chef Mimi has curated as their muse. 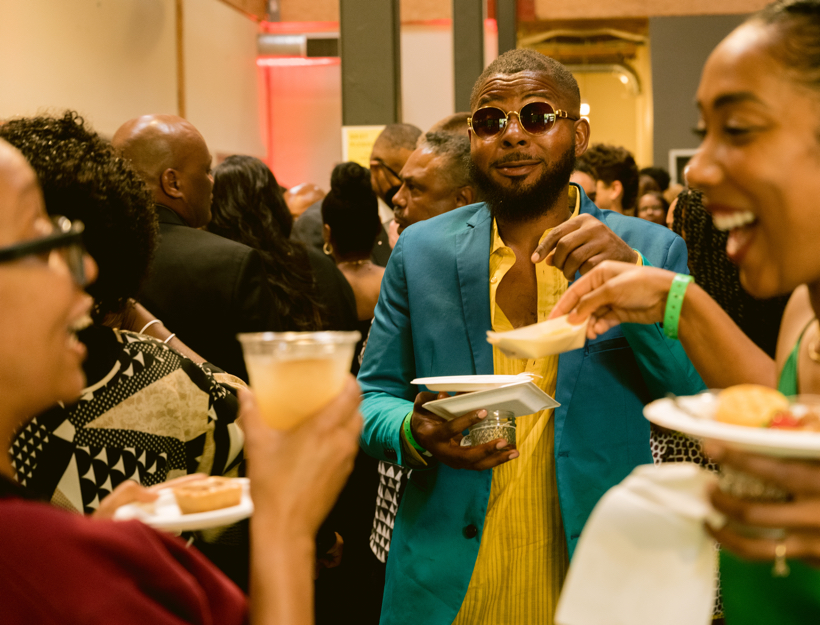 A melanated fusion of all origins from the diaspora. My wife didn’t get the memo sent out to all the sista’s 46 and over — that read “sista gurl, it ok wear fly sneakers with that hip fittings wrap dress.” The brothers were sliced. A few striped out in seersucker suits. 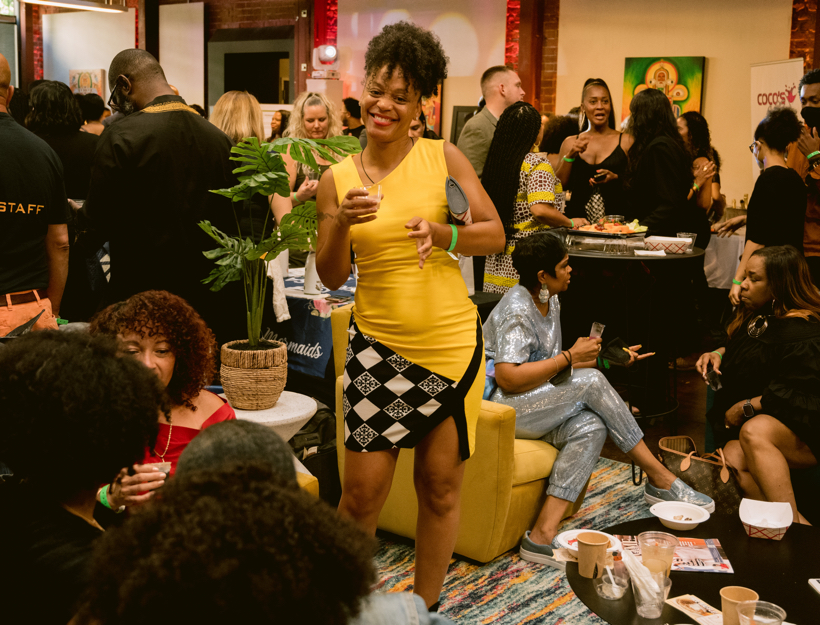 The soiree had an oldhead vibe, smiles and nods filled the large three-room event space. 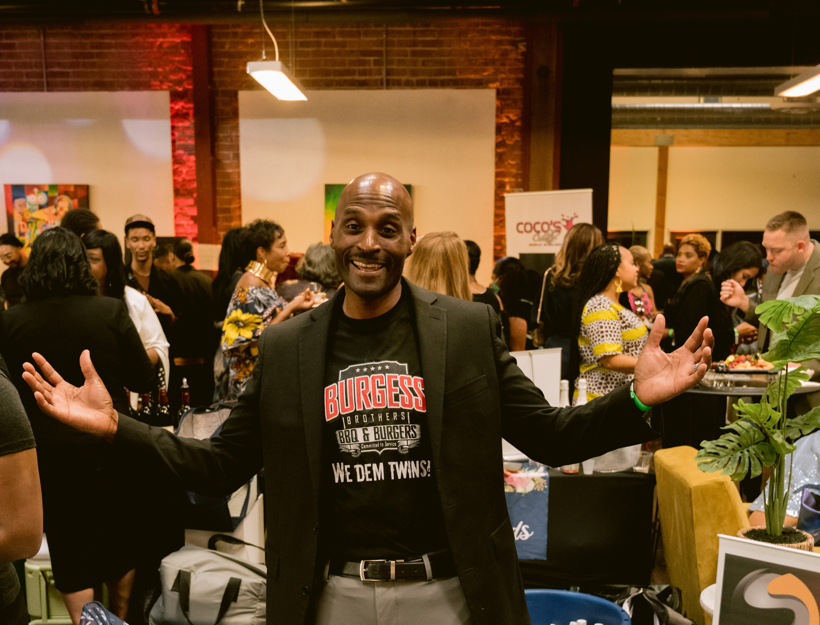 If I didn’t know any better, I’d think the universe had conspired with me sonically. Why else was the DJay playing Too $hort as we pulled up.  By the time we check in and made a few laps plotting our culinary indulgence — three T’s ‘Let’s Get Down” shared an interpolation with Maze’s ‘Before I Let You Go’. 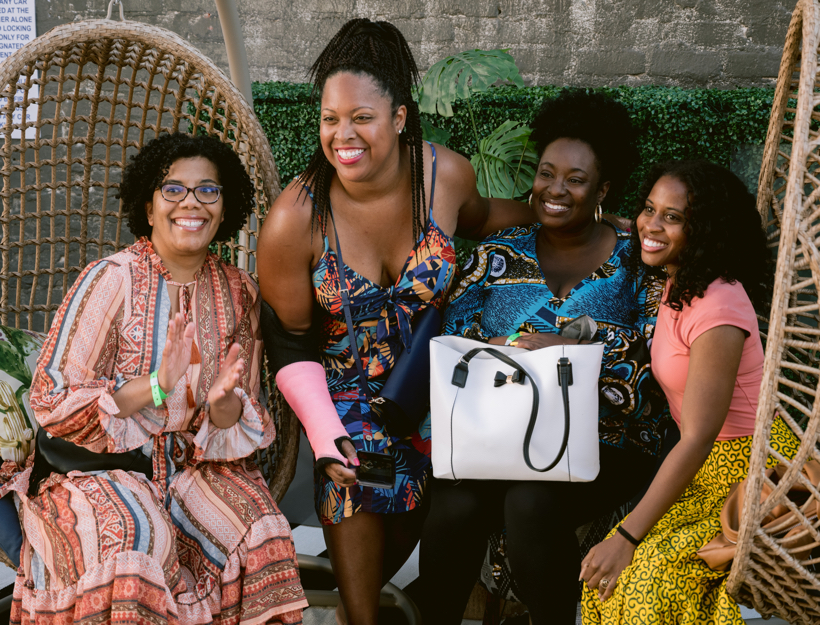 If you know the song, you know the part when the entire party (just as the DJ brings the music down) sings at the top of their lungs… Gooooooooo

If you know the song — sing along — one time with me,

You know I thank God sun rises and shines on you

Before I let you go

It was a whole groove. 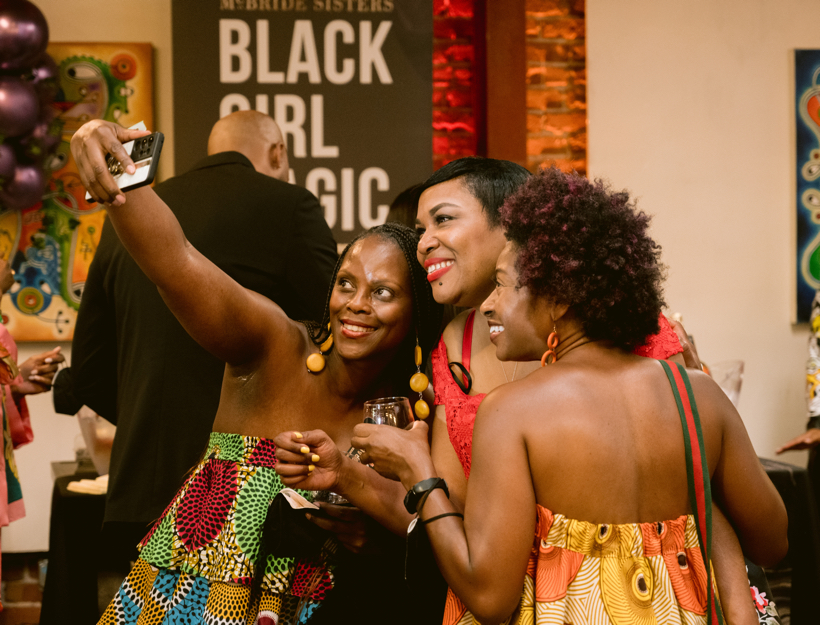 Back to the eats and bottomless craft cocktails and endless wine pairings offered.

I could use crafty word-play to describe the wall-to-wall scrumptious and generous portions served up by the featured chefs. I’ll spare you and instead just say get your tickets early for next year. 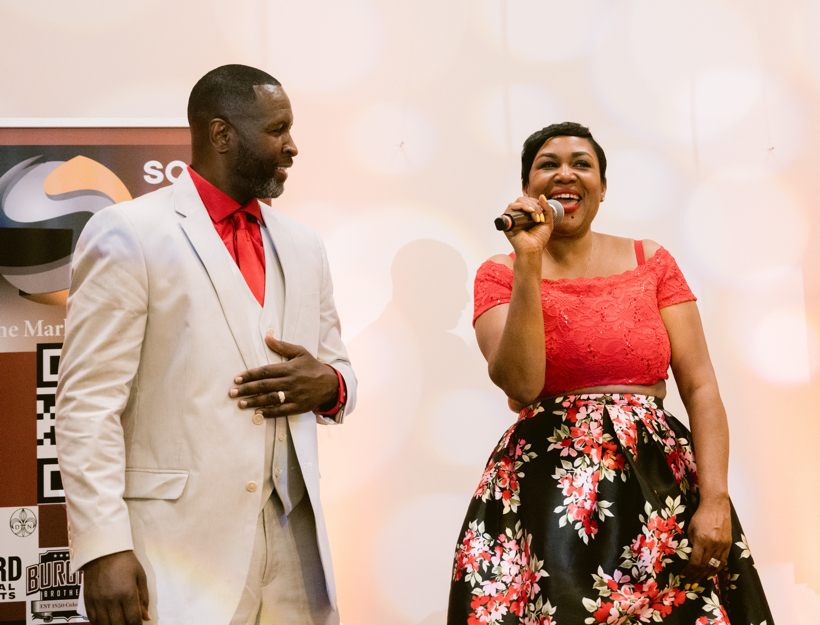 Five years ago, I asked Chef Mimi what does Town Bizness mean to her?

“You know,” she said without hesitation. For her, it means “revolution to me.” Adding, “It means do your own thing. Don’t wait for anybody. Be your (own) self. Be authentic, you know,” Imma add ‘YADIDAMEAN”.

“Boss up and take responsibility for what you want.”
*

“They know I’m ballin ‘in the city like DeRozan’ is one of the stand out lines in the classic Roddy Ricch tune “Die Young” which holds more and more truth every year Demar DeRozan decides to pop out to come play in the popular Los Angeles pro am Drew League.