For over a year and a half now, everyone in the world has been affected by the COVID-19 pandemic with their work patterns, future plans and everyday lives being changed in the process. Within the States, the Asian American community has been disproportionately affected during these trying times, with anti-Asian hate crimes increasing by nearly 150% in 2020 alone. San Francisco State University has been at the forefront of speaking out against this violence with Professor Russell Jeung spearheading the Stop AAPI Hate coalition which works to track and respond to incidences of “hate, violence, harassment, discrimination, shunning and child bullying in the United States”. At the SFSU Fine Arts Gallery, professors Sharon Bliss and Kevin Chen also worked to do their own part in fighting against AAPI hate by creating the exhibit Power of Community: Chinatown Then and Now.

Power of Community is the first exhibit to be open to the public at the Fine Arts Gallery since COVID-19 restrictions began. As gallery director Sharon Bliss explains, “Kevin Chen and I decided that we would create our exhibition as a celebration of Chinatown and its diverse multigenerational community. We thought this would be an important way to welcome all students back to the SFSU campus for the return of in-person instruction after the COVID shutdown.” Open from September 21 – Oct 20, Power of Community “celebrates the joy and longevity of these incredible neighborhoods through multigenerational works spanning from the 1940s to the present.” The exhibit contains work from five different contributors: the late Benjamen Chinn, his niece Lenore Chinn, Chinatown Pretty, MACRO WAVES and Chinatown Alleyway Tours. 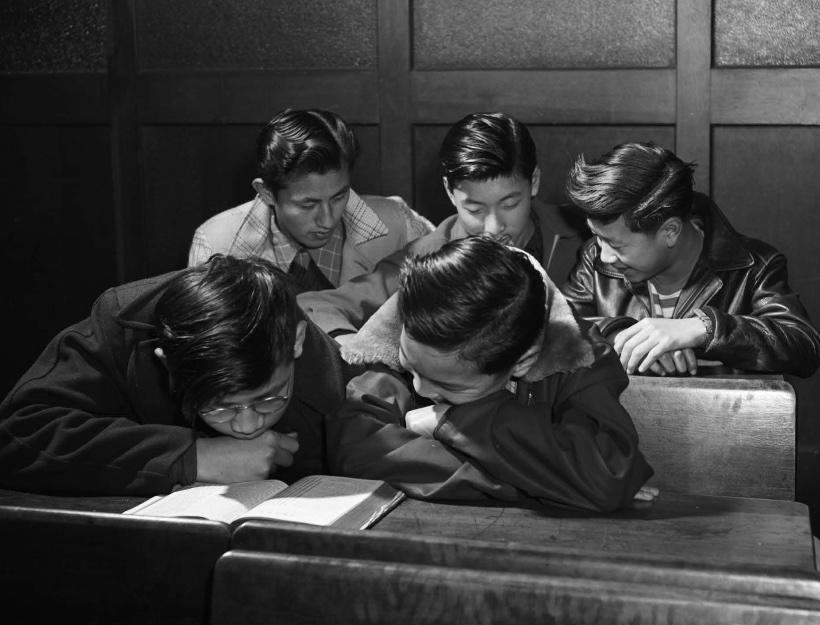 Benjamen Chinn was the first artist whose work was confirmed for the exhibit. Mr Chinn served as a photographer for the US Army Air Corps and later enrolled at the California School of Fine Arts (now the San Francisco Art Institute) with teachers such as Ansel Adams, Minor White, and Edward Weston. In that time Chinn documented his neighborhood, having been a resident of San Francisco’s Chinatown from birth. His work in the exhibit spans the late 40’s to early 50’s and features street scenes and academic subjects.

The family of Benjamen Chinn has been handling his estate since his passing in 2009 and has been supportive of the Power of Community exhibit and generous with their time according to Bliss. Adam Chin was kind enough to give a comment on his thoughts on the exhibit to Culture Honey, stating:

“My hope is that the Power of Community exhibit helps the audience to appreciate the richness and depth of the Chinese community within the cities where they live. The exhibit invites us to view the Chinese people as people first. The details are rich, showing clothes, food, aesthetics that may be a little different from the mainstream, but the people depicted are doing things that everyone else should recognize – they are working, retiring, volunteering, going to school, keeping a business going during Covid, etc.” 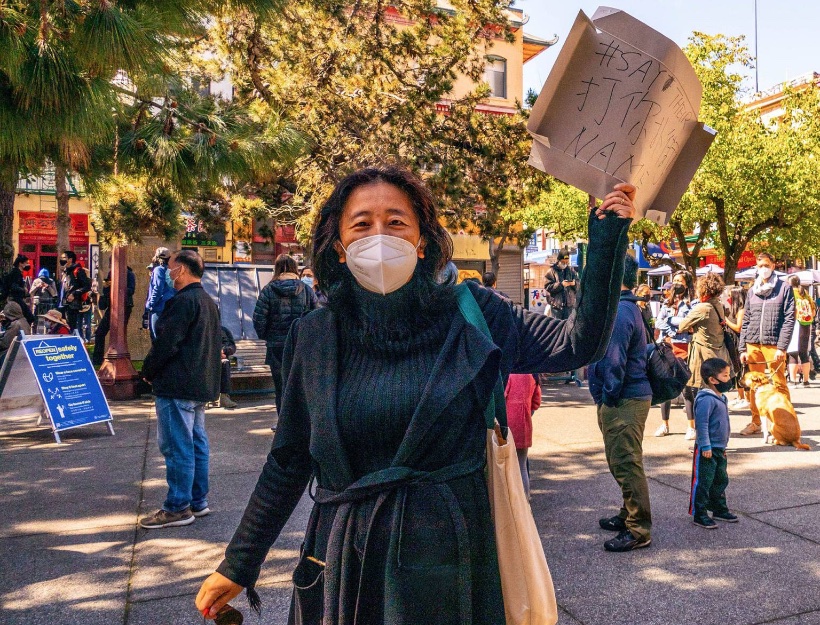 The niece of Benjamen Chinn, Lenore Chinn is a contemporary artist whose work documents the art and culture within San Francisco’s Chinatown over recent decades. Ms. Chinn was also available for comment and had this to say about the context of the last year for Chinatown and the message she hopes Power of Community sends.

“After over a year of sheltering in place I am seeing the area starting to come alive again through community groups creating space for events and activities, supporting our most vulnerable and building an infrastructure to thrive… Power of Community: Chinatown Then and Now is a great way to remind the public that Chinatown has faced many challenges but it has survived through its spirit of resilience. It is my hope that viewers will come away with a deeper appreciation of the culture and heritage of Chinatown’s residents.”

MACRO WAVES is an art collective based in Oakland which features multidisciplinary artists of color working to create immersive experiences with conceptual art, design and new media. Power of Community worked with three of the collective’s artists, Robin David, Dominic Cheng and Jeffrey Yip to display Altern8 Realm, an augmented reality tour featuring family altars in businesses throughout San Francisco’s Chinatown. MACRO WAVES collaborated with five Chinatown business owners to hear their stories and create virtual in-store Qingming family altars for each business. Guests to the establishments can view the virtual altars through their phones by using the Adobe Aero app (fully supported on iPhone and limited compatibility with Android). 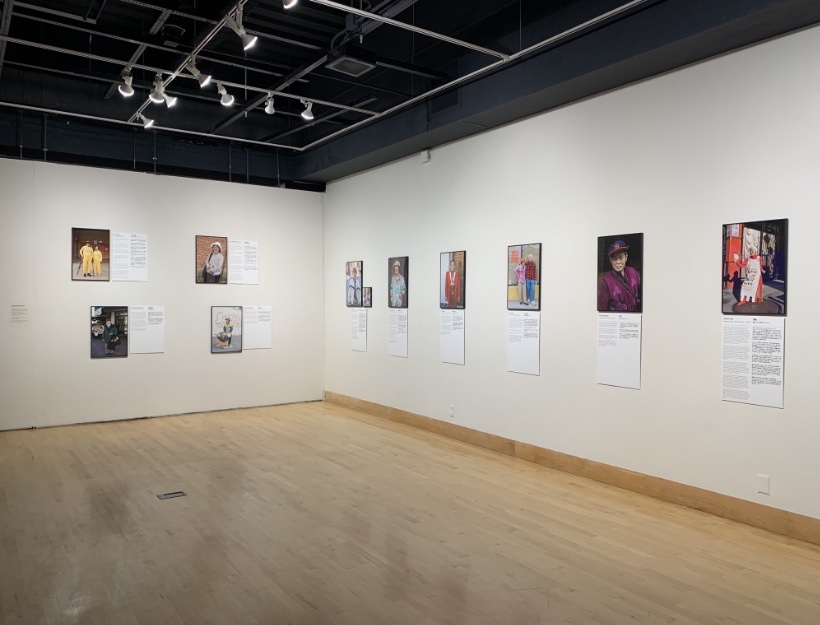 Created by photographer Andria Lo and writer Valerie Luu, Chinatown Pretty is a project to document the street style and fashion of senior citizens who live and shop in Chinatowns throughout North America. The photos and featured alongside stories of the individuals’ lives which the pair collected through casual conversation. Power of Community includes Chinatown Pretty images from San Francisco, Los Angeles, Oakland, Chicago, New York and Vancouver. As director Sharon Bliss put it, “We thought it was important to bring in the idea that there are Chinatowns across the continent.”

San Francisco is believed to be the oldest of the Chinatowns, but the presence of Chinatowns throughout the country shows the prevalence and importance of Chinese American citizens to America’s cultural heritage. It also shows, as Adam Chinn described “an indication that they have always been viewed as an ‘other’ everywhere outside of Asia,” The work of all the collaborators in Power of Community endeavors to fight against such stigma  and show the viewer what is special about AAPI heritage as well as the ways in which all people are the same.

Chinatown Alleyway Tours (CAT) is a youth program sponsored by the Chinatown Community Development Center. Before the pandemic, local high school students would lead tours through the back alleyways of San Francisco’s Chinatown in order to share their neighborhood’s rich history and cultural legacy. With 202o’s lockdown tabling the possibility for in-person tours, CAT turned to allies and alumni to help recreate Chinatown using the video game Minecraft. Guided tours are now offered within the game where important sites and works of art have been painstakingly recreated using Google Maps images in order to create a truly immersive and impressively accurate experience of visiting Chinatown in person.

Power of Community is the exact exhibit we need at this time. As we begin to emerge with caution from quarantine and sort out what the new normal is in order to stay safe, it is more important than ever to feel connected to others and to explore our complex emotions within safe, creative spaces. It is inspiring to see the legacy of Chinatown that is represented through these exhibits as well as the bright promise of future generations who are already creating beautiful, thought-provoking art. Power of Community is well-worth seeing in person and the organizations and artists represented within it are deserving of praise and support as they continue to both combat hate and prejudice and celebrate the unique beauty and history of Chinatown.

If you are  interested in visiting the Fine Arts Gallery at SFSU in person, free tickets are available by reservation. The exhibit will be open until October 20th 2021. There will also be a closing reception on October 16th from 1-3 PM which also requires a free reservation due to COVID restrictions.
*