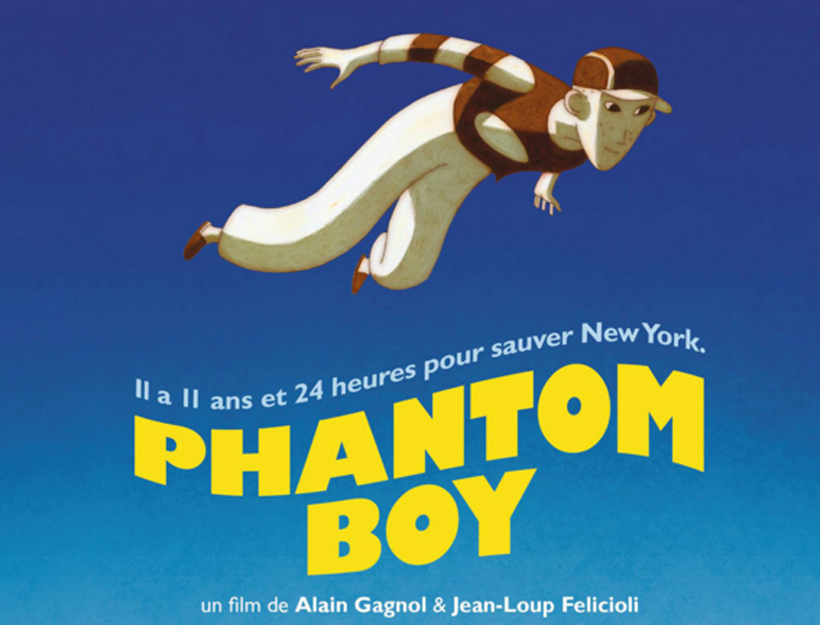 Chances are you haven’t seen “A Cat in Paris”, the animated movie directed by Alain Gagnol and Jean-Loup Felicioli. Released in the United States in 2012, it garnered an Academy Award nomination (for Best Animated Feature), but not much of an audience. It’s a wonderful film, currently available on Netflix or as a $3 rental on Amazon (worth every penny). The directing pair have a new film this year, “Phantom Boy”, released by GKIDS, and everything that was wonderful about their first film takes a step further here.

Gagnol and Felicoli have a singularly gorgeous style of hand-drawn animation. It’s part Noir and part Picasso, with a dash of Dali just for fun. Visually compelling, the animation varies from simple line drawings and Cubist Minimalism to amazingly detailed realism. The camera gives a viewpoint only available in animation, and frankly must be seen for its beauty alone.

Set in New York, “Phantom Boy” is the story of Leo, 11 years old and in the hospital. His illness is not specified, but the side effects are consistent with cancer. While sapping Leo of his strength, the illness has given Leo the ability to leave his body and roam around as a “phantom”, but only for short periods of time. Leo is joined in the hospital by Alex, a bad-luck-magnet police officer with a badly fractured leg. Meanwhile, the mega-villain, drawn like a Cubist Jimmy Durante, has taken over the city’s electric system’s computers and is threatening to shut down the power permanently unless paid a billion dollars. Leo, as a “phantom”, becomes the eyes and ears for the wheelchair-bound Alex as they pursue the bad guy and save the city. That’s the gist of the movie without giving away the good parts. The beauty is in the details.

“Phantom” continues in the artistic standard set by “A Cat in Paris”: the appreciation of magnificent architecture and the use of minimalism in part of a drawing to highlight fantastic details. “Cat” is a clever film, but in “Phantom” the storytelling is better. Where “Cat” is emotionally touching, “Phantom” gradually grabs on to your heart strings and then gives them a mighty tug. There were a few tears in the theater; some of them might have been mine. In the end, “Phantom” is an examination of the strength and character that are the true inner makings of this 11 year old hero, “… because he is selfless, not because he was told to, but because of who he is.”

GKIDS movies are not wide releases. They travel from theater to theater, town to town. Be kind to yourself; this movie deserves to be seen on the big screen to be appreciated. And while you’re waiting, sit down and watch “A Cat in Paris”.
*