A question Gwen Stefani has asked herself is if the magic is in the makeup? A local girl from Anaheim, California is now a pop culture icon and her bleach blond hair and pop of red lipstick are as much a part of her brand as her heartfelt lyricism and bubbly pop hits. As the former No Doubt front-woman has expanded her empire; a makeup line was an obvious extension. It is here for us now in the form of GXVE Beauty (pronounced “GIVE,” a play on Gwen’s GX signature) featuring not one but two red lipsticks and four eyeshadow palettes to go along with some of her greatest hits: “Just a Girl,” “Rich Girl,” “Danger Zone” and “Simple Kind of Life.” The brand’s name has a much deeper meaning than just the singer’s initials and songs.

“Makeup is so much about giving,” Stefani said in an interview with InStyle. “You wake up and you put a face on to show who you are that day, what you need to face the day, and you don’t really see yourself the rest of the day unless you’re on a Zoom — you just give that to people. And then they take that, you seeing when people show up and they made an effort. It’s like, ‘thank you.’ And I say, ‘You’re welcome, look what I did for you.'”

Stefani’s style evolution has occurred in front of the eyes of millions of adoring fans across the world. From making her own Disney costumes for local shows to her pink hair and braces phase to befriending fashion icons like Karl Lagerfeld and Virgil Abloh, Stefani has always been her authentic self. And makeup has been a big part of her brand. She worked at the makeup counter in an Anaheim mall before making it big in the music industry. Having been influenced by Disney and old Hollywood, she’s become an expert at creating worlds around her.

She has teetered on the line of appropriation as she incorporated style elements from various cultures throughout her career. Think pieces have been written about her use of Japanese dancers and Harajuku culture when she first broke out as a solo star. As a girl from Southern California, she’s woven elements of Chola culture into her aesthetic and when she dated No Doubt bassist Tony Kanal (who is of Indian heritage) she wore a bindi in several looks from the early band days.

If someone were to list off all of these influences separately, it might sound like someone deeply fragmented, but Stefani’s ability to weave so many different influences and stand on her own strong brand is what’s given her the superstar status that’s kept her relevant for more than two decades.

Each of her chapters has reflected what was going on in her personal life, including adjusting to stardom, winning Grammys, going through a divorce and re-finding love. Now she masterfully weaves Southern California grit with a ‘lil country twist as she enjoys life with Blake Shelton.

Here is a look at two elements of Gwen Stefani’s personal journey that led to to GXVE Beauty. 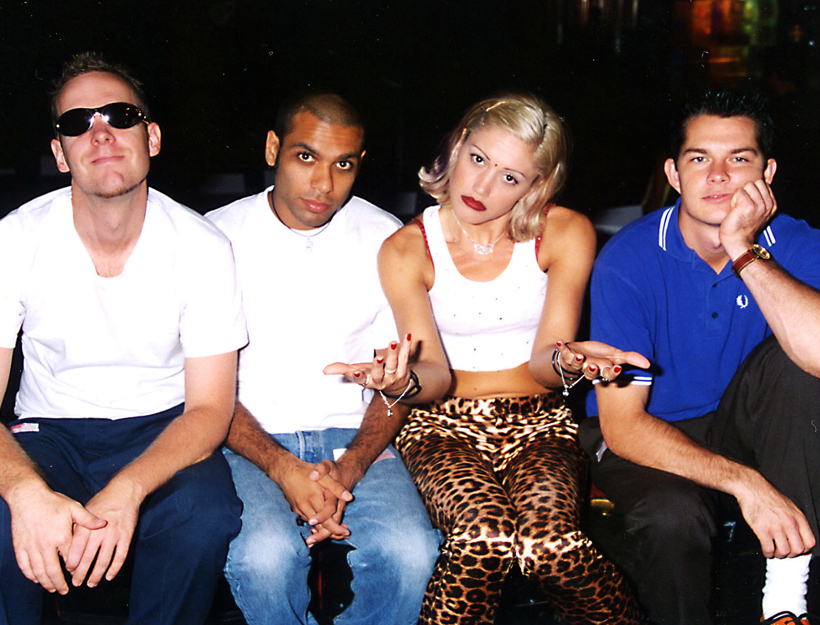 What’s the story behind the red lipstick? It’s become essential to Gwen Stefani’s brand and goes back to the very early days.

“My grandma gave me the lipstick for Christmas, and I remember the exact moment I was in my car looking in the rearview mirror in the driveway, and I put this lipstick on and was like, ‘Oh my gosh, there you are for the rest of your life,’” she said in the interview with inStyle.

She’s made the accessory part of her public persona since the early 1990s. For the back cover of No Doubt’s first album, a self-titled project, she’s standing among the boys in a white tank-top and faded Notre Dame hat (ND and ND!), nothing super spectacular. But her pouty lip is red, perfectly contoured. Her lightly lined eyes mysteriously draw you in as you ask, “Who is this girl”?

The Tragic Kingdom era is what really propelled Stefani into superstardom as the record sold 16 million copies and reached the top of the Billboard 200 chart. 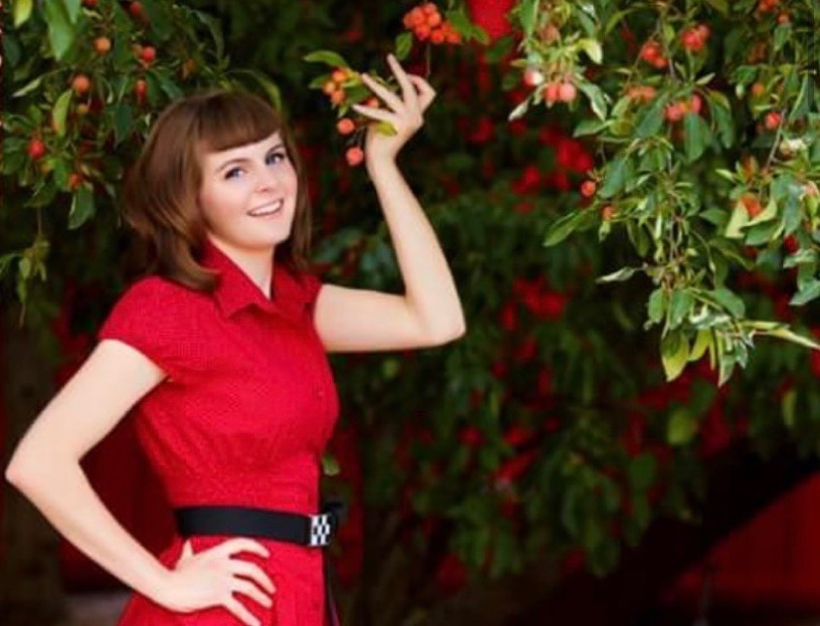 Stefani’s position as a style icon was boosted greatly when she paired red lipstick with her signature blond locks and tomboy cargo pants in the music videos for “Just a Girl,” “Spiderwebs” and “Don’t Speak,” where she wore a simple blue polka dot dress and stood barefoot in a garage. We have to mention of course that she sported the red lip on the Tragic Kingdom cover where a flirty red dress and patent leather red boots created an image replicated by countless adoring fans (myself included!) throughout the decades.

Stefani’s personal style evolved even more with Return of Saturn. Any fan instantly has the feels when looking back on her era-defining pink hair. She further pushed the boundaries of genre and style as she combined elements of goth and punk for “Ex-Girlfriend” and showed her more traditional side with “Simple Kind of Life” where even though her pink hair was present, her red lip and pouty expressions showed fans that behind the brand is still a real person who just wanted to get married and have babies.

Rock Steady reinforced the importance of red as the entire branding of the album was red, white and black and Stefani embraced Rastafarian symbolism in her outfits and aesthetic for this period. Always accompanied with a red lip, of course. The video “Hey Baby” was colorful and fun while “Hella Good,” even though the video was black and white, continued to promote Stefani’s fierceness. Everyone knew she was wearing her signature red lipstick with those wicked shades.

As she went on her solo journey, the red lipstick helped No Doubt fans know that their beloved Gwen was still herself. She continued to experiment with fashion and storytelling, including the Alice in Wonderland-themed “What You Waiting For,” old Hollywood “Cool,” high school showdown “Hollaback Girl,” Sound of Music-inspired “Wind It Up” and ultra luxe “Sweet Escape.”

Not every piece of Gwen Stefani’s journey has been all glam all the time. If anything, some of her strongest moments were those where she stripped down the makeup and bared her face to the fans.

Perhaps the first major time she did this was for “Magic’s in the Makeup” from Return of Saturn. There was never an official video for the track, but it’s the first time Stefani questions the importance of an outer shell, especially as she navigates heartbreak and picking herself up for a new relationship. For someone whose public identity is so tightly woven with her outer appearance, it’s a deep question to ponder. The album booklet features an image of Gwen gazing into a vanity mirror and although she’s done up, one can’t help but believe this is the very question she’s asking.

Later, on “Underneath it All” from Rock Steady, Gwen made waves by actually baring her face in the second half of the record’s music video. She’s light and exuberant as she welcomes back a lover after forgiving him. She wears a simple white tank and circle skirt as she bounces around on a bed with natural sunlight accentuating her blissful expressions.

When she stepped out into her solo career, she continued to make moments of vulnerability by showing a fresh face. In the music video for “4 in the Morning,” she once again opted for a make-up-less look. She rolls around in bed, but unlike the jubilation of “Underneath it All,” she is troubled and needs more answers from her lover this time.

She was also stripped down for the music video for “Used to Love You,” a heart-wrenching song about her divorce from husband Gavin Rossdale. The emotive visual features the superstar from the chest up against a mournful black backdrop as she expresses her sorrow with little more than mascara and some gloss.

As she’s embraced the country, the home of her new husband, Blake Shelton, Stefani has had a few more moments on social media where she’s not afraid to show herself without makeup. Even for some of their appearances together, like the 2016 Billboard Music Awards, she’s opted for a more natural look which has received criticism and confusion from fans who are so connected with her makeup.

But the red lip never went away as she had a full-face of makeup for the recent single “Slow Clap” and even celebrated her many style moments with the video for “Let Me Reintroduce Myself.” Stefani knows she’s evolved over time and appreciates how each step of her style journey — braces and all — have gotten her to where she is today.

Even though few artists have been as eclectic as Gwen Stefani, few have empowered generations of girls (and guys) to believe in themselves and create their own identities. Her makeup is a key element of her brand and now she’s GXVE-ing fans a new way to connect with her and continue embracing themselves.
*