“This is my community.”

Dennis Haywood loves his neighborhood. Though Northwest Pasadena is painted as a shady area by the Pasadena police, Haywood knows the truth: it’s a good community with a policing problem. Each day that Haywood walks his dog, bikes or goes on a jog throughout the neighborhood, amidst the beauty of the full-growth trees and old Pasadena sidewalks, he is also reminded of the brutality that has been committed by police for years with little to no oversight.

Only two blocks from where he lives, Anthony McClain was shot in the back and killed by police. The sad truth is that even before that murder, Haywood and friend James Farr, host of Conversation.Live, both felt like they had enough footage and information on police brutality in Pasadena to make Thorns on the Rose a feature length documentary.

Over his years running the Pasadena Black Pages, Haywood has assembled an internal catalog of instances of police brutality against Black citizens in Pasadena. These crimes span decades, from the murder of Otis “Popeye” Hampton on Washington near Fair Oaks in 1984 to the brutal assault of Christopher Ballou by two Pasadena police officers who beat him to the point of breaking his leg – yet were just recently cleared by an internal police investigation and returned to work as full fledged police officers. With such blatant unpunished violence on display by police officers in Pasadena and seemingly no meaningful accountability holding officers responsible, Haywood knew the story of his city needed to be told through the eyes of the Black community. The world must know what the Pasadena police would rather have swept under the rug than brought into the critical light of the public eye.

“We were there. We felt it. I couldn’t breathe for days after that,”

When the death of a Black man is reported on the news, for many it is but a passing grievance, a grim moment of silence and contemplation within their day as they wonder how long police brutality in this nation will go unchecked. For Dennis Haywood and James Farr, it is their lived reality. All footage within Thorns on the Rose besides police body cam footage was filmed by one of them. They were there, living the same experience again and again of police escalating conflict and resorting to violence rather than solving the very issues they were brought in to fix. When calling those who are meant to protect and serve leads not to peace but to death, trust is shattered. As Caree Harper, a former police officer, said herself, “In Pasadena, when officers do wrong, they don’t seem to be held accountable. It seems like they are actually promoted.” This is a systemic problem and must be met with systemic answers.

Since the release of Thorns, the Pasadena Chief of Police, John Perez, has officially announced his retirement. This announcement comes on the heels of another announcement, the announcement that the civil rights attorney Benjamin Crump, known for his recent success in the trial against Derek Chauvin for the murder of George Floyd, will be coming to Pasadena to take on the McClain case.

The City of Pasadena has also taken steps to incorporate Black voices into police oversight in the city, with Florence Annang, and Dr. Alexis Abernathy being appointed to a new Community Police Oversight Commission.  There is hope that the rest of the committee will be filled out with a majority of People of Color – those effected most by policing in Pasadena. 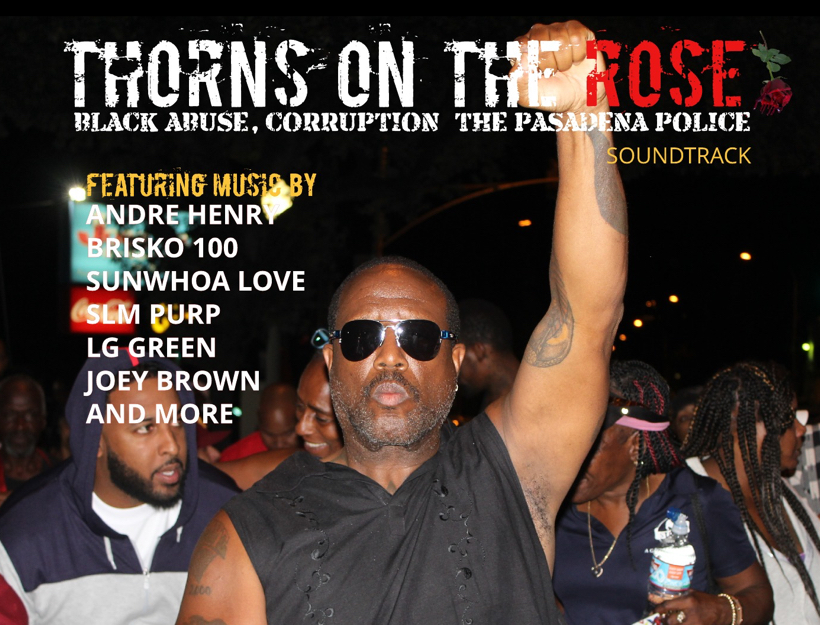 The soundtrack for Thorns on the Rose is entirely composed of music by local artists.  Haywood wanted to make sure the music was locally produced, that the voices reflect those in the film. Most of the music was written and composed during the protests of 2020, surrounding the murder of George Floyd and leading up to to the death of Anthony McClain in Pasadena. The soundtrack includes such songs as “Pressure” by Brisko100, “Hold Your Fist Up” by LG Green, “Not Enough” by Sunwhoa Love, and “Red and Blue (Remix)” by Andre Henry. “Lettuce Free” by Sunwhoa Love which plays at the end of the film is said by Haywood to truly encompass the heart of the message within Thorns on the Rose. The soundtrack for the film is coming out this week for those who are interested in giving it a listen outside of film viewings.

“Let’s propel someone into greatness.”

All proceeds from Thorns on the Rose will go to the Anthony McClain Social Justice Scholarship. The scholarship is open to PUSD 2021 graduating seniors. The deadline to apply is May 28, 2021 and the recipient will be named and awarded on June 8th. Applications can be sent to “dennis@pasadenablackpages.com”. The scholarship was created with the intention to help further a Black student’s education. As Haywood put it, “With the scholarship, we hope to alter the education trajectory of one student.”

Students can apply for the scholarship by watching the film and writing a 500 word essay detailing their thoughts on the film. Included should be what steps they would take to make police and community relationships better, as well as answering a few questions about their past education and future educational goals. So far the film has raised over $7,000 toward the scholarship. If you would like to help contribute to the scholarship, consider watching the documentary on Vimeo. 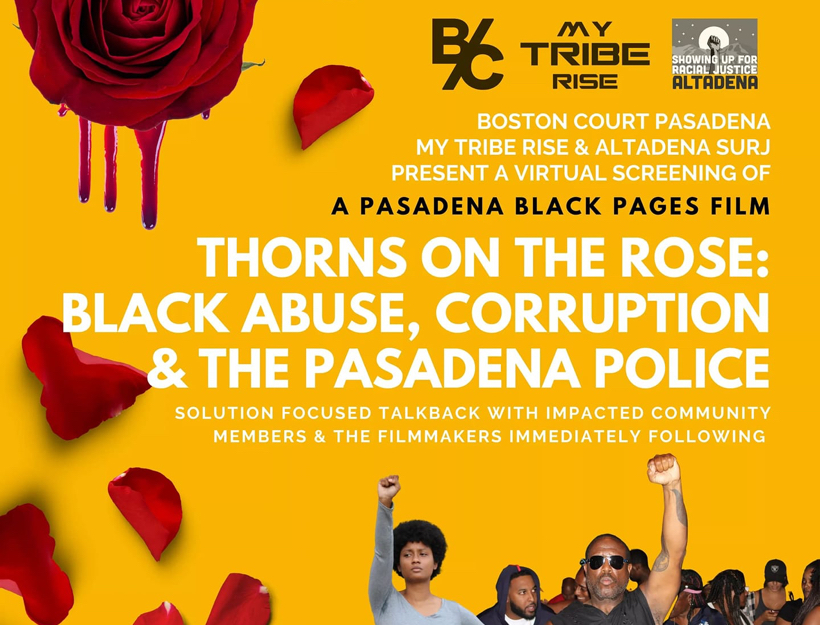 Thorns on the Rose is a film that needed to be made.

It is a film decades in the making as the unhealed violence brought to Black people by the Pasadena Police has festered and grown unchecked. It is a film made in protest, in anger, an outcry against all the blood unjustly spilled. And amidst that anger there is hope. Hope that change is possible, that we know what must be done and now it is on us to do it. Change will not come in silence; it will come when Black voices such as Dennis Haywood’s are truly heard.
*

*Story first published on CultureHoney.com on May 18th, 2021