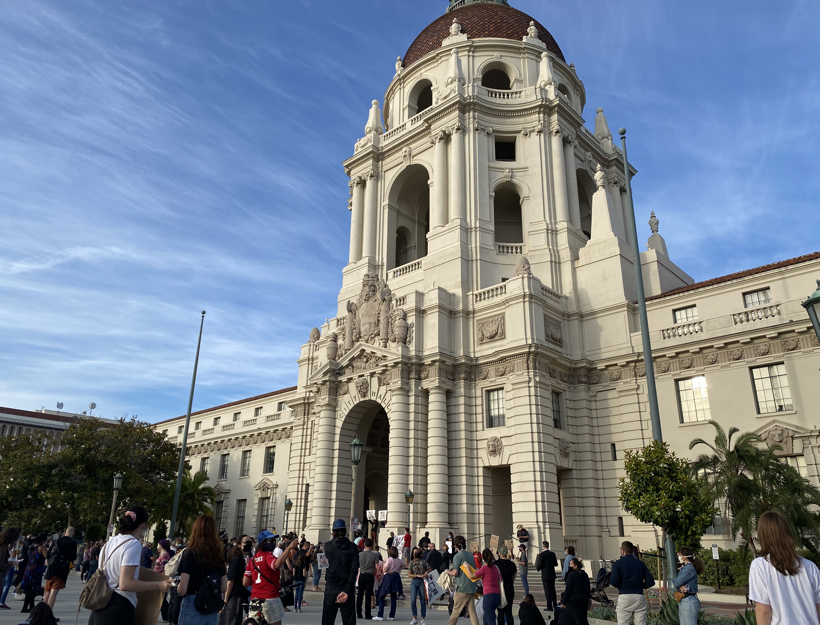 There have been four protests in Pasadena so far this past week that I know about and I was able to participate in two. Tuesday night was the Mr. George Floyd Caravan Vigil & Peace; it was a powerful time.  The caravan and vigil were organized by the Pasadena branch of the NAACP (National Association for the Advancement of Colored People) and NDLON (National Day Laborer Organizing Network).  There were also multiple leaders from faith communities and churches in the area led by IMA, (Interdenominational Ministerial Alliance) and CCC (Community Clergy Coalition).  The meeting spot for the caravan was designated at the First AME (African Methodist Episcopal) Church of Pasadena at 5pm and the caravan and the program afterwards lasted until about 7:30pm or a little after. 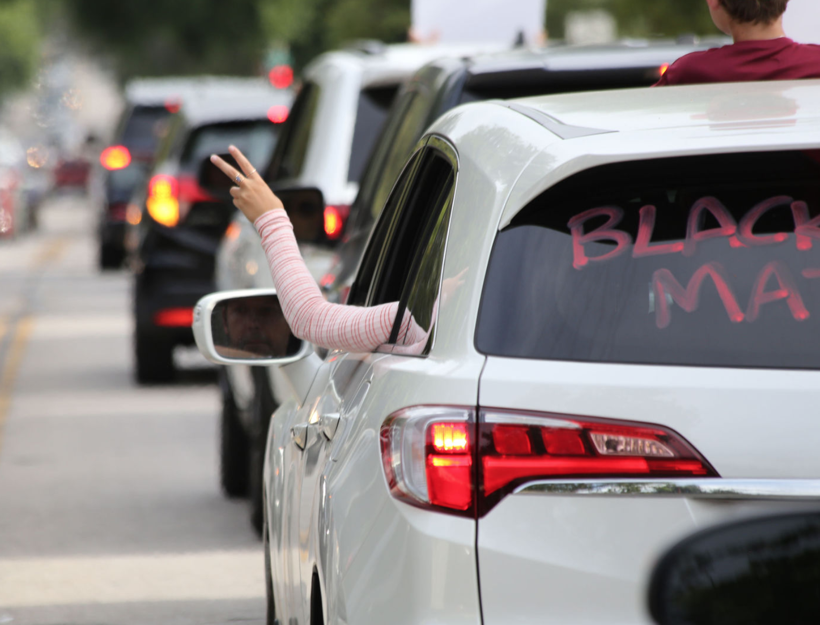 Once we learned about the protest caravan, my husband and I thought it through, as we always do before we commit to joining in an action for a humanitarian issue or an issue of social justice. We concluded that this event was one for us to be involved in. We are cautious with Covid-19 still unchecked, but the idea of each party in their individual cars seemed like a perfect creative solution! We didn’t have much time beforehand to make our signs, but we found a few cardboard boxes and did our best!  Here is the one we taped to the back of the car! 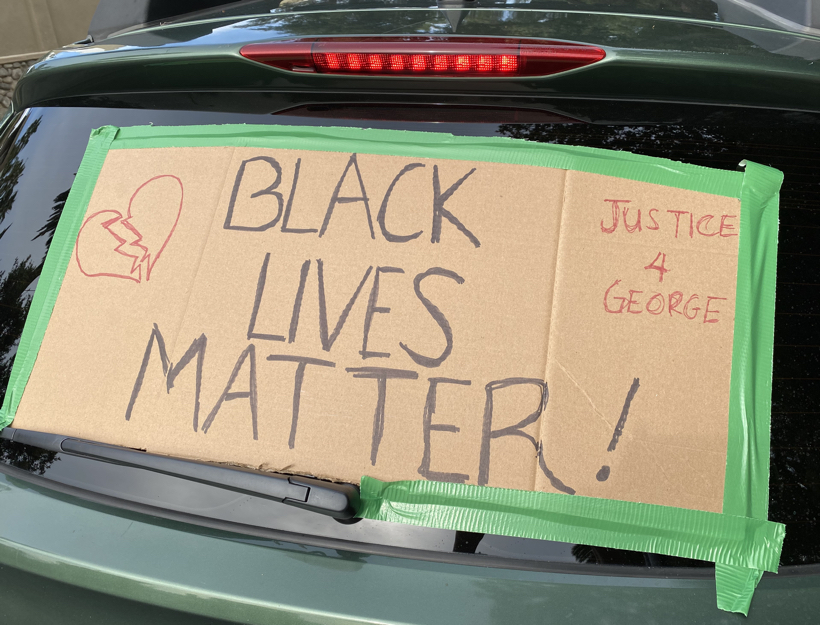 BTW – on the note of thinking participating in protests through – I do encourage a genuine thought process for anyone considering joining a march, protest or rally. Consider the cost.  As is plainly evident on the news each day, there is risk in public displays, even those that seek to be non-violent. Tempers can flare, agitators can show up, and violence can erupt, the worst being at the hands of law enforcement. Always have a first and second choice exit strategy in mind, just like you would at any other large public event. So as we look at our individual lives, we must analyze what we truly have to offer each situation. There are those that are the primary bread-winner for a family, or caregiver for children or elderly parents, those with health issues, etc. These situations may lend themselves to manning a social media account with informative articles, writing emails, making phone calls to elected officials or donating money to organizations or groups that are doing the work that we can’t. I think the important point in the decision-making process is to not let “comfort” be the final word. In fact, I would say in all the areas that we can use our influence if it feels too comfortable for us, we may need to reexamine. We may be able to offer a lot more than we think!  Having said all this, a veteran protester and Rector of the All Saints Episcopal Church in Pasadena recently posted these thoughts to social media about being prepared as one thinks about joining a protest or rally – so please scroll to the end of this article to read them there! 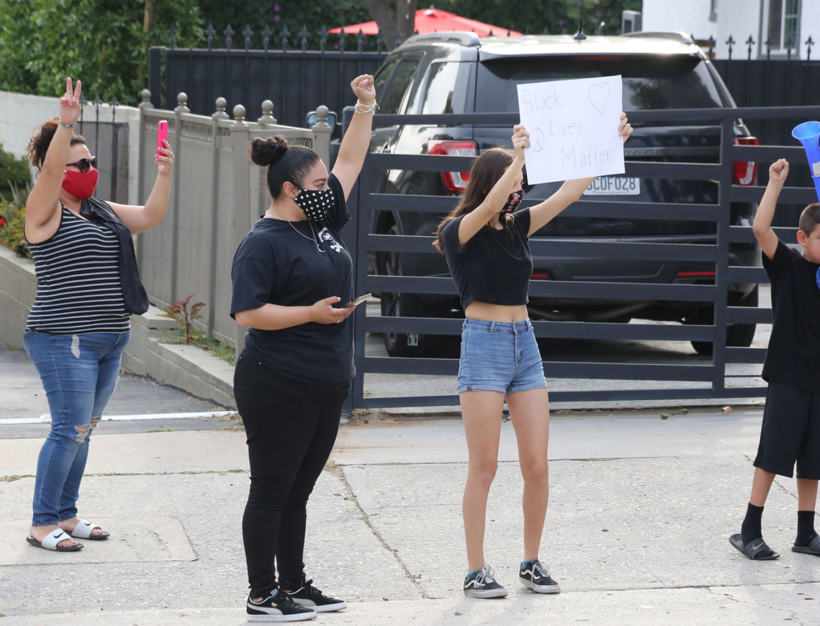 The most powerful part of participating in the protest caravan for me was the interaction with the families in the neighborhoods we were routed through from the AME church to City Hall. Families of all ages came out on their lawns or sidewalks to join in the statements of support being made. We actually almost wore our car horn out from honking it continually! 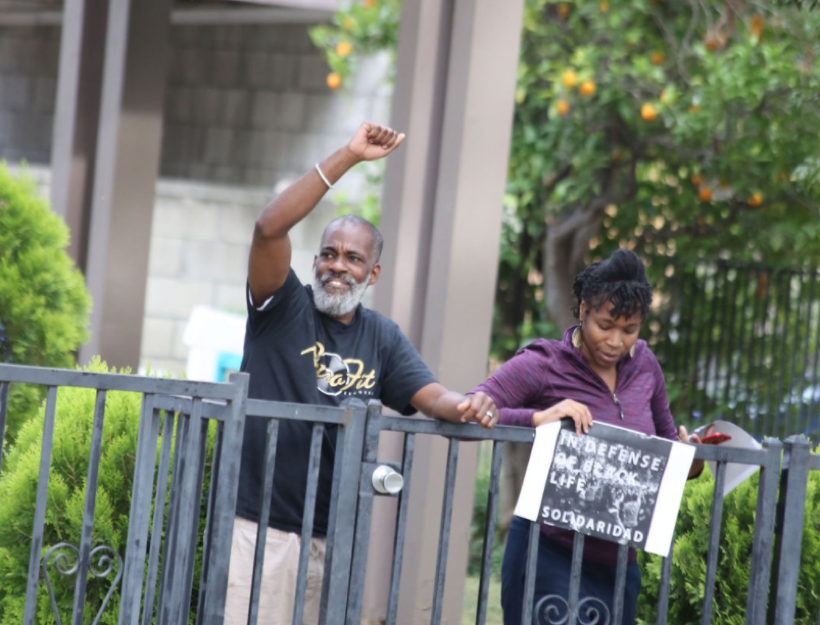 Neighbors Along the Way of the Protest Caravan in Pasadena, CA

Pumping fists of solidarity, peace signs flashed or just a friendly wave with the kids made the time feel so community-connected.  Sustained eye contact (“we see each other!”) above masks was so powerful that tears would well up on each side. It was a slow-moving caravan so these moments were able to provide genuine connection between people. 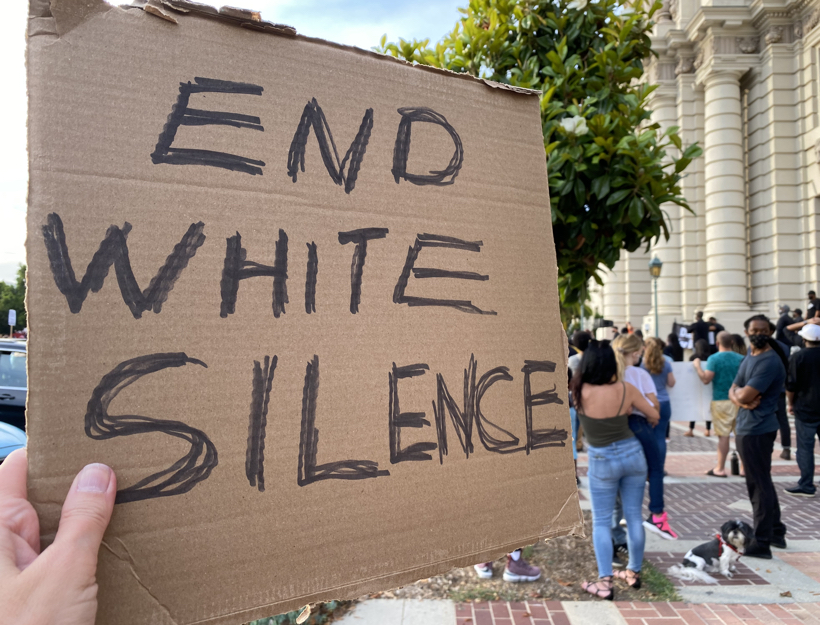 Once we got to City Hall, we did decide to park our car and go in on foot to listen to the program. We positioned ourselves in an open spot to keep that 5-6 foot diameter around us for Covid-19 safety’s sake. I thought the folks whose cars were at the front of the group had a great spot for showing support and hearing what was going on! 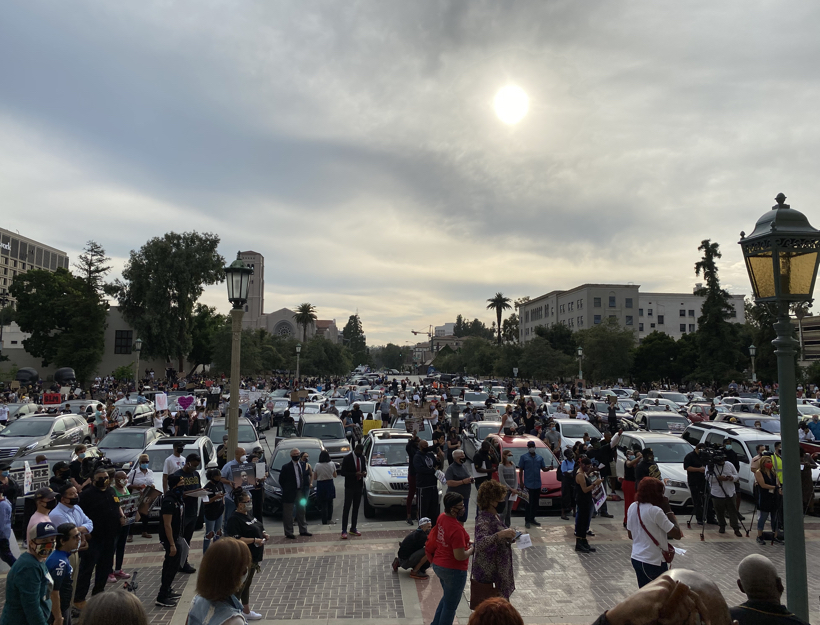 Here’s a video of the atmosphere:

We had made these masks for the Candlelight Protest on Sunday evening and wore them again on Tuesday: 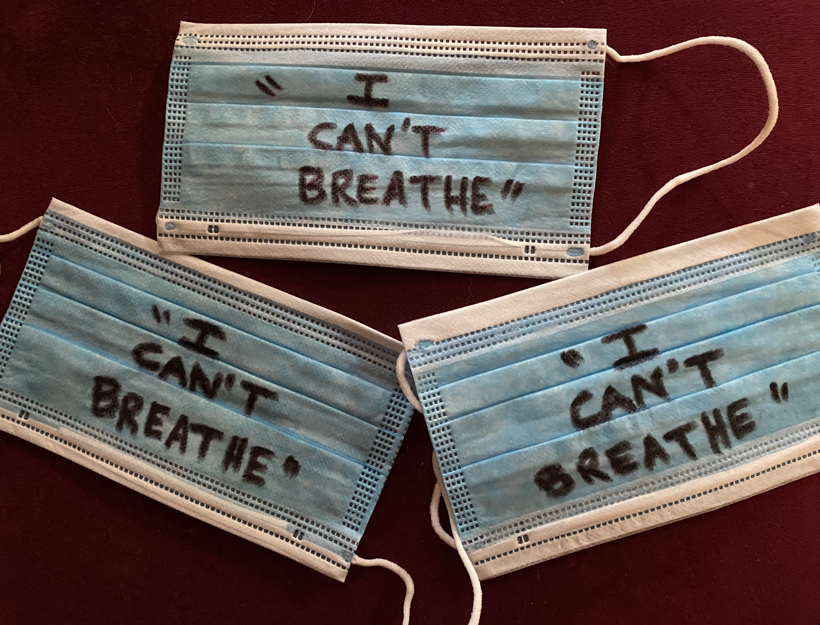 Here is a video of the scene from Sunday’s Candlelight Protest at City Hall:

One of the moving rituals we participated in was an 8 minute and 46 second cry/noise/scream to commemorate the amount of time that the police officer had his knee on the neck of George Floyd as his life left his body. If you haven’t watched the video, it is horrible and you may only be able to watch it once – but don’t turn away. Here is the link to the video hosted by The New York Times. We cannot understand the pain of another without an idea of their suffering. This was murder in broad daylight and it’s not the first time it’s happened by far. That’s why we protest: police brutality against African Americans has to stop. Racism in the United States has to stop. White supremacy in all its forms must give way to an embracing the truth that all humans are equally valuable. And yes, Black Lives Matter. 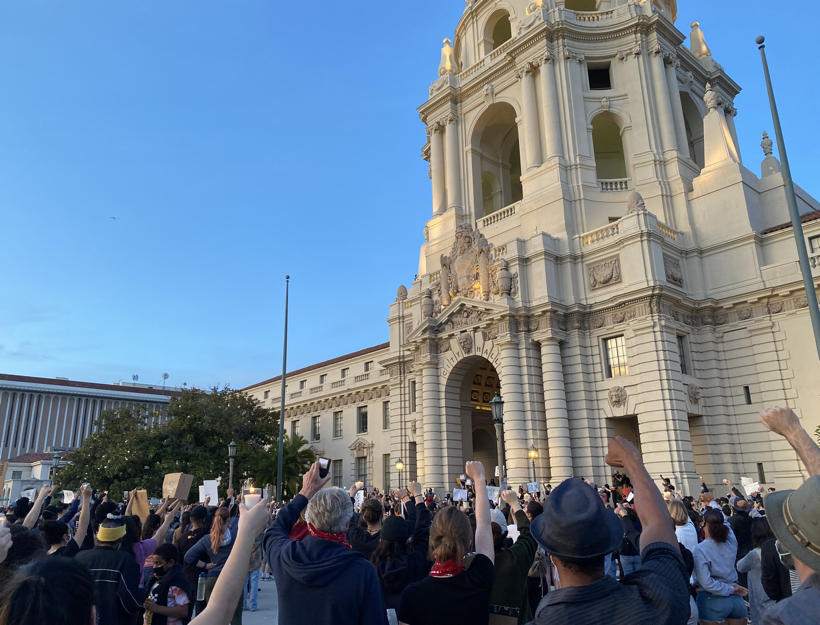 Here is a video of the candle lighting ceremony at the end of the gathering.  Hope to see everyone out, praying and participating in non-violent protest and movements until things REALLY CHANGE. 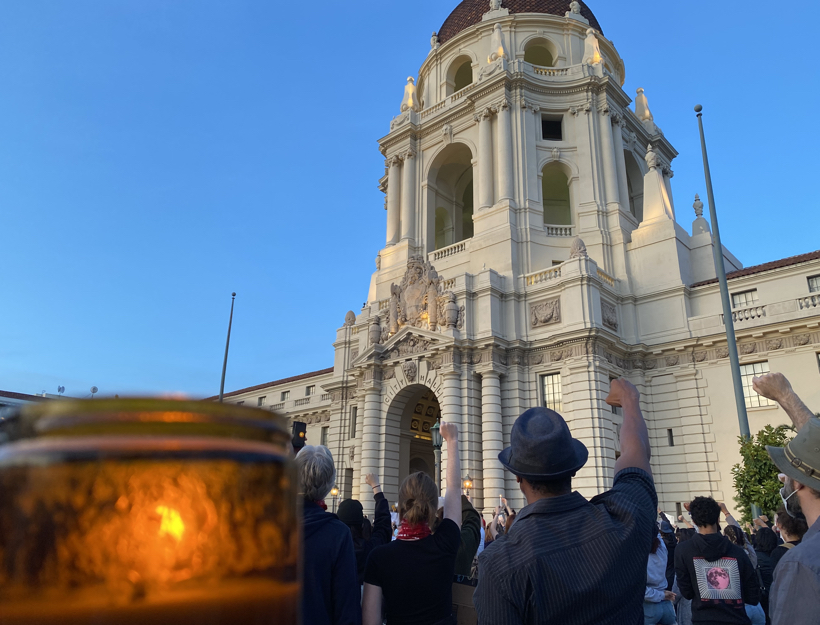 Notes on Protesting from the Rector of All Saints Church, Pasadena, Mike Kinman:

“All Saints Church family, if you are going out to a protest that involves taking and holding spaces like streets, etc, these notes are for you.

First, there is a difference between a protest and a parade. Both have value. A parade stays on sidewalks or in cars, has police escorts, is low or no-risk. It shows support. Most things on this list will not apply to you.

A protest involves disruption, which usually involves violating laws by taking and holding space, violating ordinances. It has varying risk depending on the action and your social location.

Both are done most effectively nonviolently.

A few notes if you are going to a protest:

1) Good for you. Not everyone can do this for many reasons, especially during a pandemic. Thank you for doing this.

2) Take a buddy. Even the best planned and executed actions can change quickly. Have a buddy and stick together.

3) Take at least one extra cell phone battery. Your phone will drain very quickly, particularly if you are livestreaming.

4) Take an extra mask in case you lose yours. Take others to hand out to people who might not have them. Remember we are in a pandemic. Physical distancing is still incredibly important to your health and others. Do your best.

6) Even the best-planned nonviolent action can turn violent… particularly if the crowd is large. If you know and trust the leadership of the action, stick with them and follow their lead. Step off if you feel you are being asked to do something you are not capable of doing (good leadership will respect this). If you cannot connect with the leadership or do not trust the leadership, trust your gut. If things begin to turn violent, leave at once. There is no point in you being collateral damage in a leaderless action that turns violent.

7) A bottle of water with milk of magnesia mixed in is an effective portable remedy for tear gas. Carry some.

😎 Consider signing up for an online Direct Action Training like this one being offered tomorrow by veteran St. Louis activists.

If you are going to an action that is not formally organized (e.g. has legal observers and people tracking arrests) or where you do not know the organizers:

2) Find a friend who is willing to be your bail buddy. This is someone you can keep in text contact with during the event so they know where you are and what is happening… and who can come and bail you out if you are arrested (if you want to be bailed out… you might not… that’s a different kind of protest).

NOTE — California has $0 bail right now for almost all crimes because of COVID. HOWEVER, one of the misdemeanor exceptions is “Assembly for purpose of disturbing the peace or committing unlawful act; Refusal to disperse, Penal Code § 416.” in which case bail may be set at the discretion of the bench officer. BUT if bail is set under 35K, the sheriff is releasing people (OR’d) and they don’t have to post. Still, it’s convoluted so have a bail buddy whom you can call if you get arrested.

3) Write that friend’s number in Sharpie on your arm. Your phone may be taken when you are arrested and that person is your phone call when you are processed.

4) Let at least one other person know you are going.