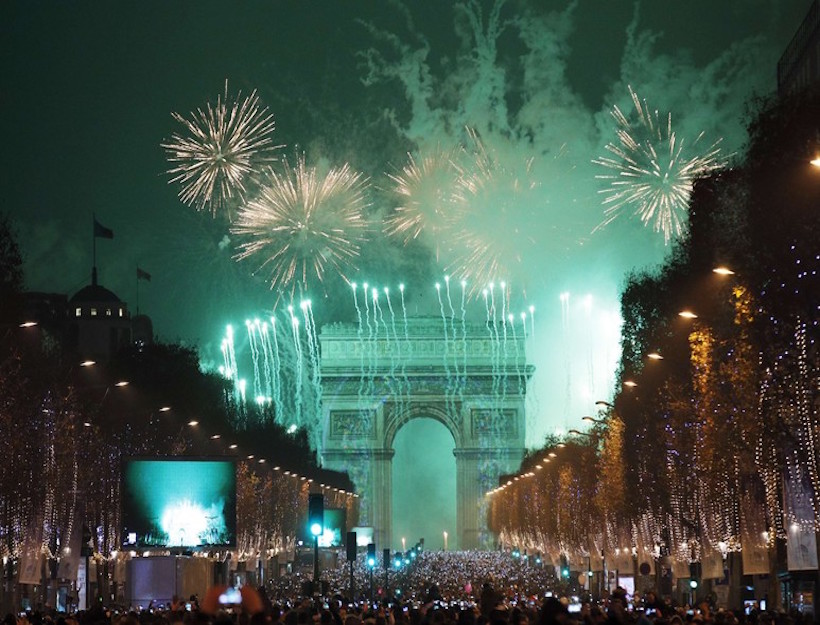 Many people in France start New Year’s Day in the evening, celebrating with friends and family “le reveillon (the old that has passed) de la Saint Sylvester” at a leisurely dinner that includes champagne or sparkling white wine – not to confuse the two. New Year’s Eve in Paris includes vin chaud (hot wine) and cider as well. At midnight, the new year begins and public fireworks displays are anticipated.

“Sylvestre” begins on January 1st and ends February 1st. French people start wishing each other “Bonne Année!” (Happy New Year!) and exchanging bises (small kisses on each cheek) at the stroke of midnight on January 1st, and mailboxes are then flooded with greeting cards and gifts throughout the month.

People generally spend the rest of New Year’s Day quietly. For example, I quietly sat in amazement as I watched Gustavo Dudamel lead the Wiener Philharmoniker in the traditional New Year’s Concert. This New Year’s Day, Gustavo Adolfo Dudamel Ramírez took the stage at Vienna’s Musikverein. At 35 years, he is the youngest conductor to lead this traditional concert. The January 1 performance is viewed by millions, broadcast in over 90 countries.

It is likely that you Los Angeles-based music lovers already are well-aware of him. He is a Venezuelan conductor and violinist, the music director of the Orquesta Sinfónica Simón Bolívar and the Los Angeles Philharmonic, and founder of YOLA (Youth Orchestra Los Angeles).

He is a product of “El Sistema“, a music education program of which founder José Antonio Abreu maintains that,“El Sistema breaks the vicious circle [of poverty], because a child with a violin starts to become spiritually rich.”
Think global, act local. Even more than music, Gustavo Dudamel exemplifies, offers, speaks, supports and demonstrates a consciousness that serves children and humanity in general. This“El Sistema” organization that began with between 5-11 students has contributed more than two million children to orchestras worldwide.

“The Foundation’s goal is to expand the opportunity to experience music for as many children and communities as possible. We believe that music provides a universal language that transcends our differences and has a unique capacity to build bridges of understanding among all peoples. Music does more than nourish the human spirit. Its very practice instills focus and discipline, respect for others, a spirit of collaboration and many other values that make us better citizens of the world.”