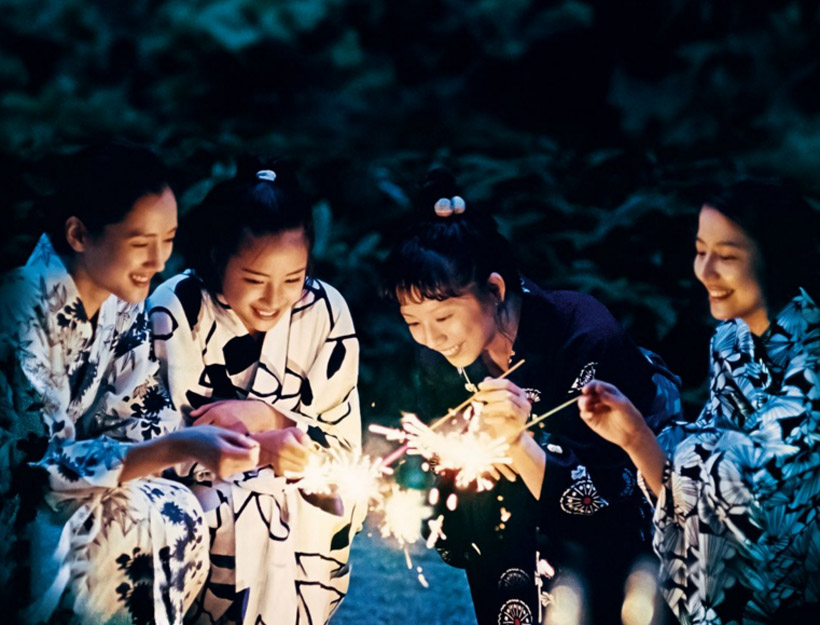 What do you think of if I mention Japan? Big cities like Tokyo? Sushi? Geishas? “Our Little Sister” takes us to a modern Japan generally not seen in American media. It is set in the seaside town of Kamakura, and it is beautiful.

“Our Little Sister” is the story of three adult sisters, Sachi, Yoshino and Chika, raised by their grandmother after being abandoned by their parents. The father left first, with a mistress. The movie starts as the sisters learn of their father’s death, and that his affair produced another sister, the 14 year old Suzu. Not to give away the plot, but Sachi asks Suzu to live with them, and the move causes a predictable disruption. Not as predictable, however, as a typical American movie plot would provide.

“Every living thing takes effort to pick out the bugs and disinfect.” Chika makes this statement in describing the process of making plum wine, an annual family tradition. This statement also illustrates the process of dealing with parental betrayal, stolen childhoods, and general pain that the sisters have endured because of their parents’ actions. At one point, Suzu states, “Someone is always hurt because I exist.” Please don’t get the idea that this movie is melodramatic; it isn’t. Rather, it’s a beautiful story of the power of siblings’ love and reconciliation.

The movie is powerfully acted, especially Suzu, portayed by Suzu Hirose. The strength of her performance exceeds her age. But the highlight of this film is the cinematography.

If you are a fan of Studio Ghibli films, visually “Our Little Sister” is a Miyazaki in real life. The scenes of public transportation, the architecture and the flora send you to a Japan I previously only knew in anime. At one point, Suzu rides on the back of a bicycle through an arbor of blossoming cherry trees. The scene is stunning and will etch a picture of beauty into your brain, the kind you think back on and smile.

“Our Little Sister” is in limited release and probably won’t be around for long. Be kind to yourself; this movie is so moving and beautiful on the big screen. Set aside a place in your schedule and get there, and if you have a sister, bring her too.
*