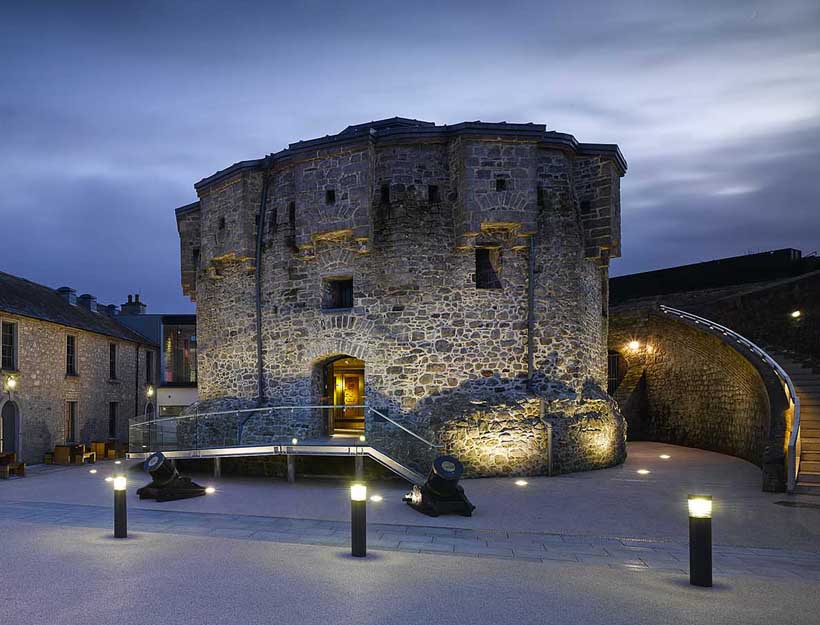 Along the Shannon River

Named after the Celtic goddess Sionna, the Shannon River is the longest running river in Ireland. It begins at Shannon Pot in Eastern Ireland and runs through to the North Atlantic sea, splitting west from east. The significance of this river dates back far into humanity’s history and is thought to first be mapped by the Graeco-Egyptian geographer Ptolemy. To many in Ireland, throughout the years it has been a place of trade and of travel as well as a life-source for the cities and towns along its banks.

About halfway through its journey towards the sea, the river shallows and creates a natural ford. Evidenced by the number of bronze age artifacts found in the area, this place has been a place of crossing for many an age. Naturally, a town was built. Not merely a simple town, Athlone is a place flowing with history, some expected, some surprising. It is here where our focus now turns.

The Hill of Uisneach, a place of assembly since prehistoric times, a place of worship, a place of High Kings, a place where Ireland was divided into dioceses in 1111AD; Clonmacnoise, the 6th Century church built by St Ciaran on the banks of the River Shannon, burial place of the High King of Ireland in 915; Dún na Sí, an Amenity and Heritage Park, a place of natural beauty in parklands, turlough, and wetland reserves.

It is not hard to get swept into the magic and majesty of Ireland’s ancient places, and Athlone is no exception. Perhaps it is the breathtaking nature, seemingly unchanged for many an age. Perhaps it is the presence of a world so different from our own (not so much if you live in Britain like I do, but Ireland is very different than much of the USA).

Whatever the reason, Athlone plays host to many from around the world who stop off and visit for as long as they can spare, taking in the sights and sounds and exploring a world steeped in history. Spend the day exploring Athlone’s history and then spend the night drinking away the day in Sean’s Bar, Ireland’s oldest pub.

In many towns’ history, the town comes before the pub, but here in Athlone the town was built around the pub. According to the town’s website, Athlone is named after “‘the Ford of Luain’, an innkeeper who guided people across the treacherous waters of the ancient ford.” It is at this crossing point where the pub stands, and both date back to 900 AD. There’s also live music, so if the history doesn’t get you, at least the rhythm will (Gloria Estefan… anyone? No? Ok).

If after a night out with Sean you’re a little worse for wear, how about a cycle ride round Lough Boora Parklands? Or perhaps a leisurely bout of fishing? They have fully stocked lakes. Fancy a day of birdwatching to beat the hangover? The park has 130 species of birds.

It might seem like much of this article is just listing off place after place, and in many ways it is, but that’s Athlone for you. I have yet to mention Lough Key Forest Park, Athlone Castle, Glendeer Pet Farm, or walks along the Shannon River. Nor have I talked about the tasteful juxtaposition of modern amenities, including fine dining, shopping and hotelling (it’s a verb) alongside the wealth of history.

And we haven’t even got to what can be done on the river itself, including kayaking, boating… ok, I’ll stop.

Athlone is an example of the meeting of history and modernity, where the grassy hills and crumbling castles meet the shopping malls and restaurants. Unlike many major cities whose towering skyscrapers cast shadows over history, towns like Athlone have managed with elegance to preserve the essence and mystery of their former life while simultaneously welcoming new luxuries. It is a must-experience for any fan of history (or fan of beauty, for that matter).

And remember, a respectful visitor is rarely unwelcomed.
*

…what many might not know is that before he became the skateboard legend he is today, he was a skinny kid whose father was too involved in the sport and whose tricks weren’t considered cool enough…