“Wait a minute, Doc. Ah… Are you telling me that you built a time machine… out of a DeLorean?”

“The way I see it, if you’re gonna build a time machine into a car, why not do it with some style?”

Quotes from the iconic movie Back to the Future are what I believe designer Michvel Angelo incorporated into his latest collection for his brand The Kids of the Future or TKOF. Angelo is an independent designer from Atlanta who is currently in between Los Angeles, New York, and Atlanta. TKOF is manufactured in Los Angeles, CA for quality. 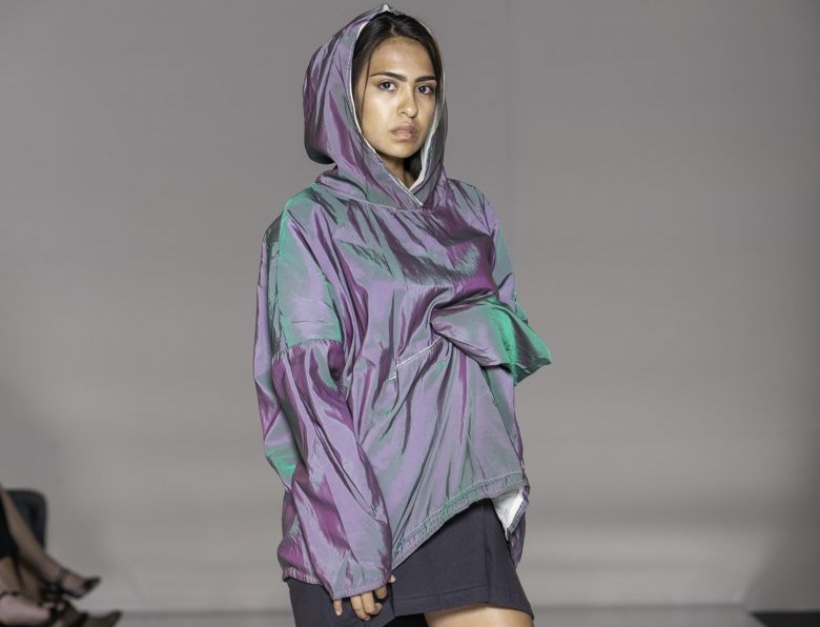 The Model Experience: THE KIDS OF THE FUTURE

Attending fashion shows in Los Angeles can get redundant because most shows are curated for the glitz and glam rather than the clothes and models themselves, and the runways are usually short. The Model Experience did a great of curating a fashion show where the audience can fully experience the models as well as the clothes and the movement of the clothing. The runway was set up in a “U” shape so the audience on both sides could see the full display of the clothes that were being showcased. I also enjoyed the lighting that was being used. At some of the previous fashion shows that I have attended, the lighting was either very dim or just not strong enough. Creating a runway where the lighting is bright not only allows the audience to have a clear vision of the clothes, but also allows the photographers to capture clear images of the models and the clothing. We were able to fully see the products being presented, and the organizers made sure to give more time to the brands and the designers rather than focusing on the host or performances during the show. Slowly but surely, I am starting to witness the Los Angeles designers and producers curate shows geared more toward focusing on the clothing itself rather than relying on social media influencers and low tier celebrities.

The designers themselves are forced to become more transparent with their brands so much that they are becoming the face for their brands due to the explosion of exposure through social media. Michvel Angelo has not only branded himself with his TKOF brand, but he has also branched off into other mediums to express his creativity, such as music and photography which have also become synonymous with TKOF. One of the very first times we had seen a designer play their own music they had created themselves was Kanye’s first debut collection for his Yeezy brand and partnership with Adidas back in 2016 when he dropped his “Life of Pablo” Album. Since then there have been more and more creatives using that same formula of keeping everything in house. Newer brands are offering more than just product. They are also creating a lifestyle that blends and ties all of their creative aspirations together. Witnessing Michvel Angelo’s show, I realized he was the only designer out of the other 15+ clothing brands that were presenting who used his own music. Most clothing brands outsource and just curate a playlist of songs that they may tweak and alter to go alongside their show, but Angelo took it a step further and used his own music. The difference this makes between all of the other clothing brands is that he is bringing the audience fully into his world.

Fashion shows are supposed to transport you for a quick 10 minutes into another world. A world created and constructed by the designer so the audience can get a better feel of what the clothes are supposed to represent. When we saw the late great Karl Lagerfeld create an entire spaceship shuttle it could have seemed over the top, but the objective was to bring the audience into a totally new world so they could get the full experience of the new collection being presented. Music is a large part of that process because visually capturing the audience is one aspect of the show, but audio is another major detail the designer has to take into consideration. Angelo played his own music during his show as his models walked down the runway, presenting his new collection which transported us into his world which separated him from the other designers in the show.

For the new collection, Angelo blended some high fashion elements with streetwear elements to create a dark collection with hints of color pop, including windbreakers that had green-purple gradients and changed color when light hit the garment. Many of the garments were black crew necks and crop top hoodies with hints of royal blue or red “Angeles” or TKOF. We also saw some hoodies that were browns and beiges with a slight blend of white and black to highlight some of the text that was on the garment. One of the t-shirts had classic Nirvana from the late Kurt Cobain, which also gave the collection a classic rock element. The models that showcased these wonderful garments were diverse and definitely did a great job of wearing the new collection. 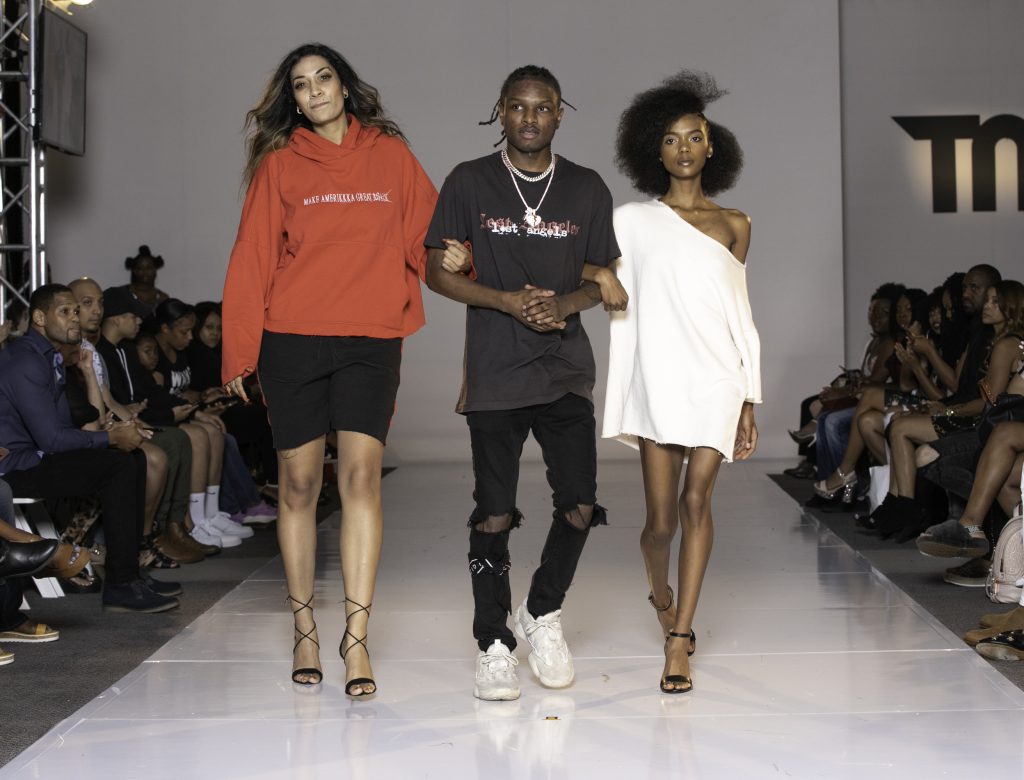 Angelo was able to transport the audience and bring us into his element by taking time to pay attention to those small details that go into a well executed fashion show. I look forward to attending more of his show in the future.  TKOF’s newest collection is now available for purchase, which you can access here!