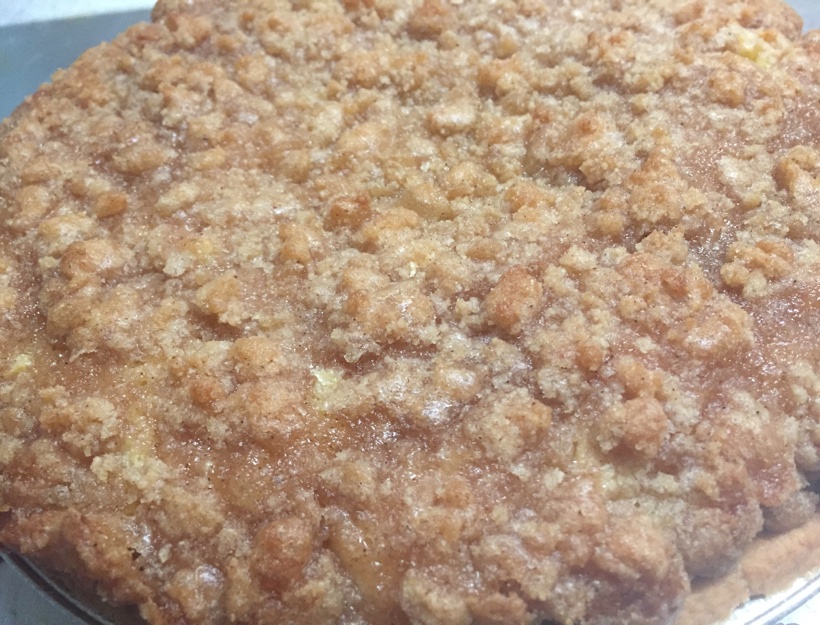 This past week was pi week, and for those of us that don’t do math it was pie week. Which of course means that I made an apple custard pie. Claremont throws a pie festival every year to celebrate this amazing day. Last year I entered a pie into their contest and won. This year I entered this apple custard pie, and I am happy to say it turned out great. Though it did not win, it did receive praises and that is enough for me.

For the apple filling:

For the custard layer:

For the streusel topping:

1. Combine the flour, sugar, baking powder and salt in a bowl or food processor; pulse several times at 1-second intervals to mix. If it’s in a bowl, just take a whisk to it for a minute.

2. Add the butter. If in a processor, give it a good pulse so no visible pieces remain. If you’re using a bowl, use a pastry cutter.

3. Use a fork to beat the eggs enough to break them up, and add to the bowl. If in a processor, give it a pulse until it forms a dough. If you do it too much, the dough will become too soft. If you want, you can also knead with your hands; that is my preferred method.

4. Invert the dough onto a lightly floured work surface and gently knead together 3-4 times to make it smooth. 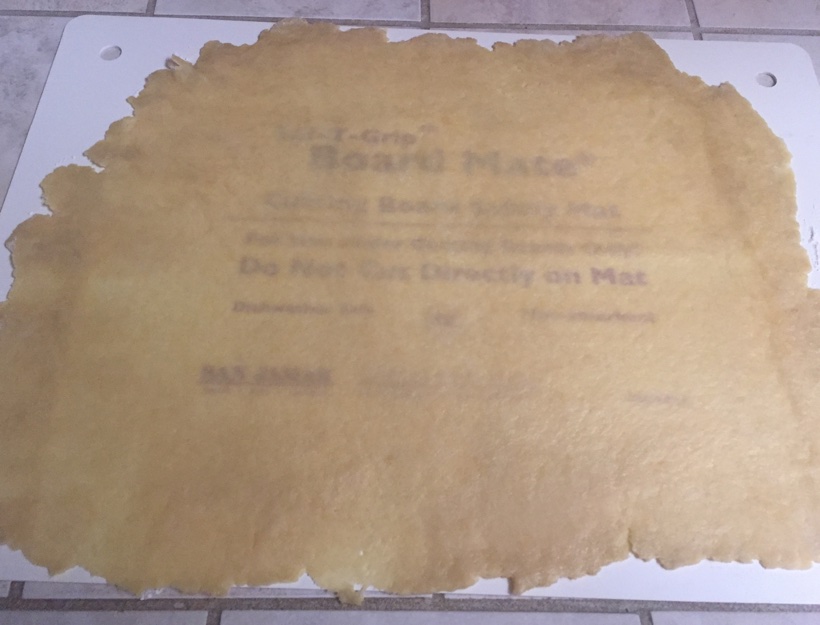 5. Divide the dough into 2 pieces and form them into disks. Wrap each in plastic wrap and chill for at least an hour. This dough makes two crusts. This particular pie only needs one crust, so if you want you can freeze the second one for up to three months. It will also last three days in the fridge. 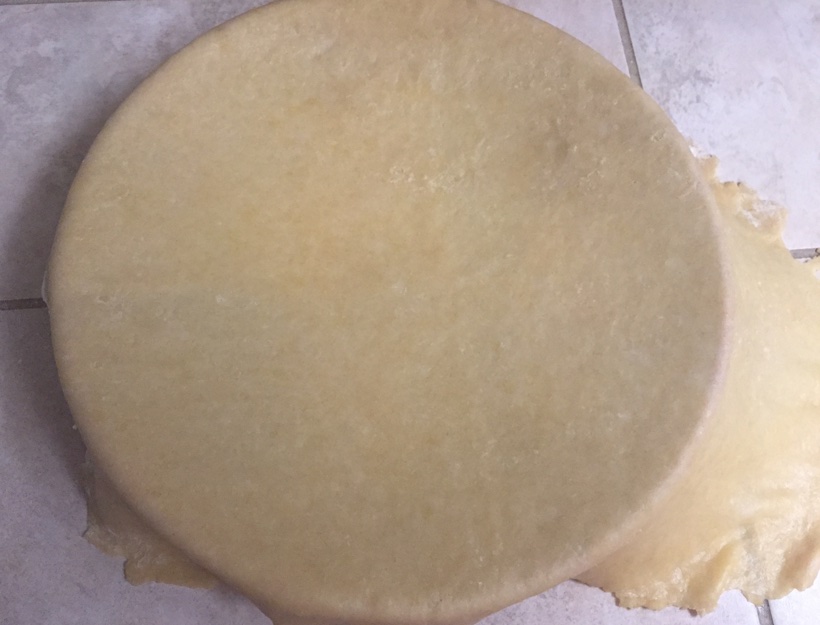 6. Before rolling the dough, place it on a floured surface and gently knead until smooth and malleable. Form into a disk again before beginning to roll. 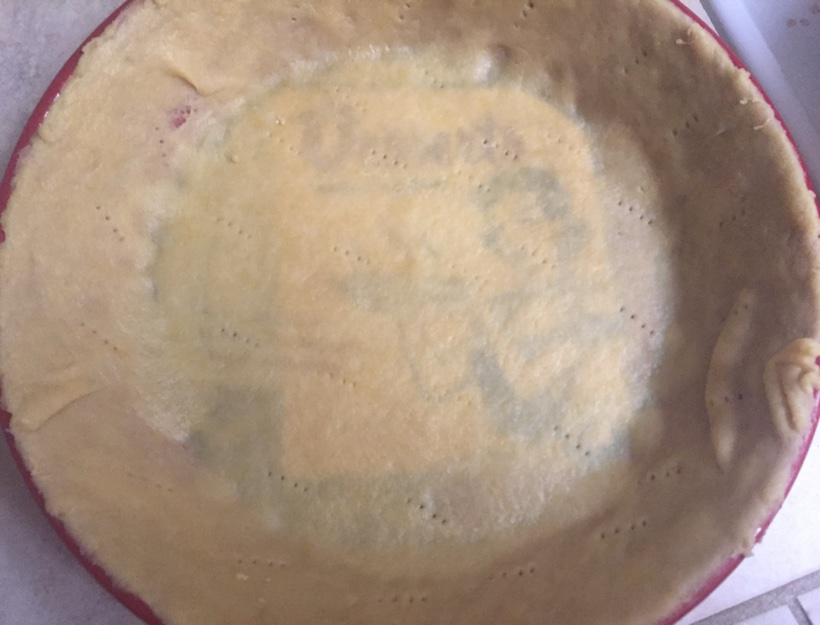 2. Prepare the pie crust and arrange in a DEEP pie plate, crimping edges. Set aside.

3. Peel and core the apples. Slice them very thin. 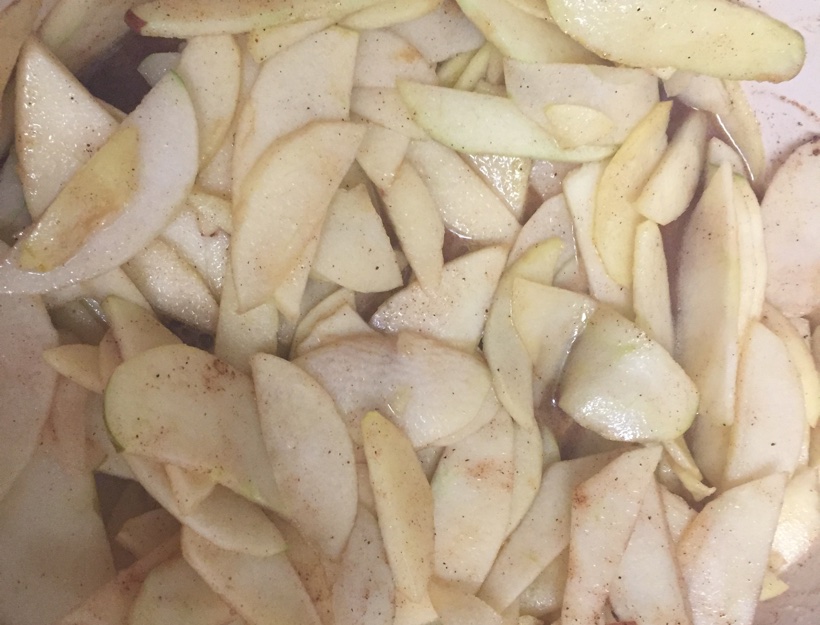 4. Put them in a bowl and squeeze lemon juice on them after every apple you slice, tossing to coat. This is to add flavor and also to keep the apples from browning. 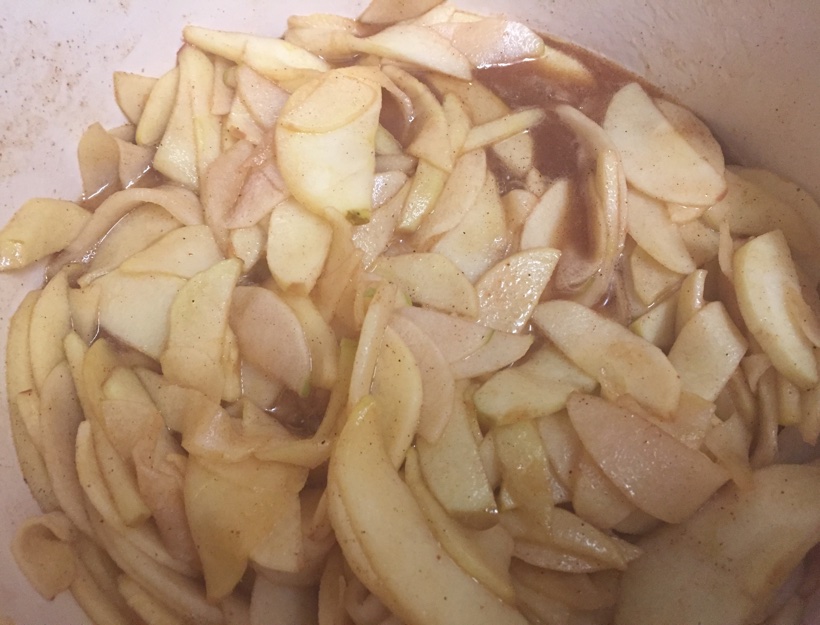 6. Add the apples. If you used a lot of lemon juice, don’t add all of it. Add 1 teaspoon maximum.

7. Cook over medium heat for about 3 minutes. Turn the heat up to high and cook for another 2-3 minutes until the liquid is bubbling and has reduced somewhat.

8. Pour the apples into the unbaked crust and set aside. 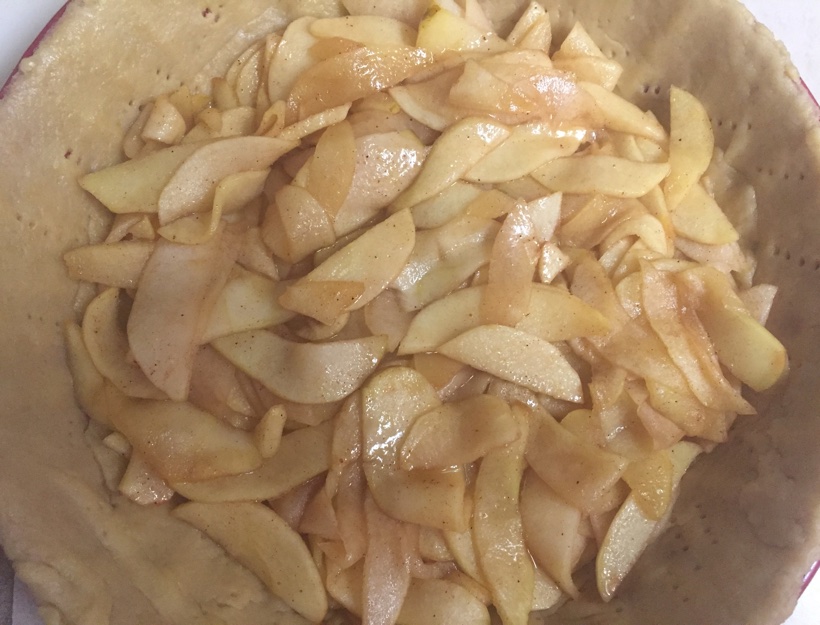 9. Make the custard. In a medium bowl, whisk together sour cream, egg yolks and vanilla. 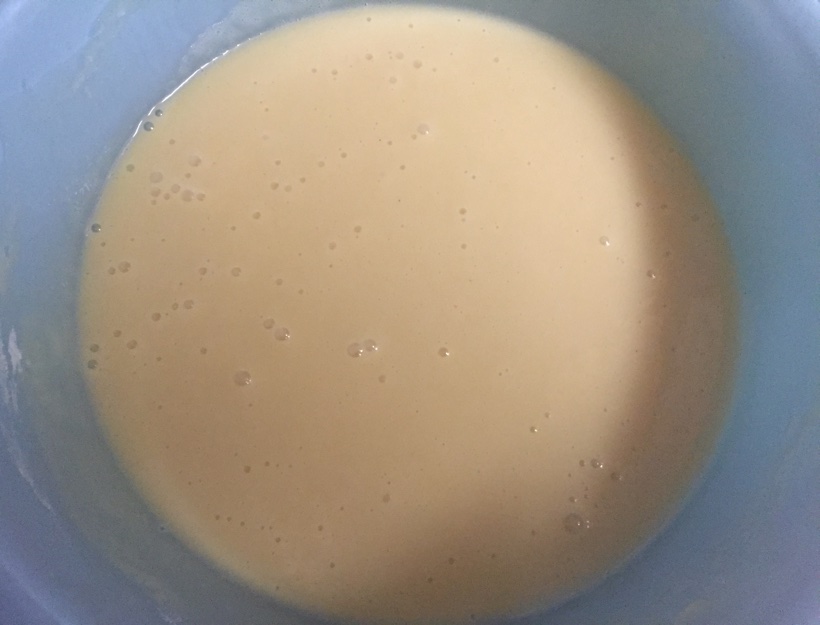 11. Gradually add the flour while whisking. Whisk out any lumps.

12. Pour the custard over the apples, but be careful not to overfill! How much you need depends on the size of your pie pan. I used all but about 1/3 cup of the custard. 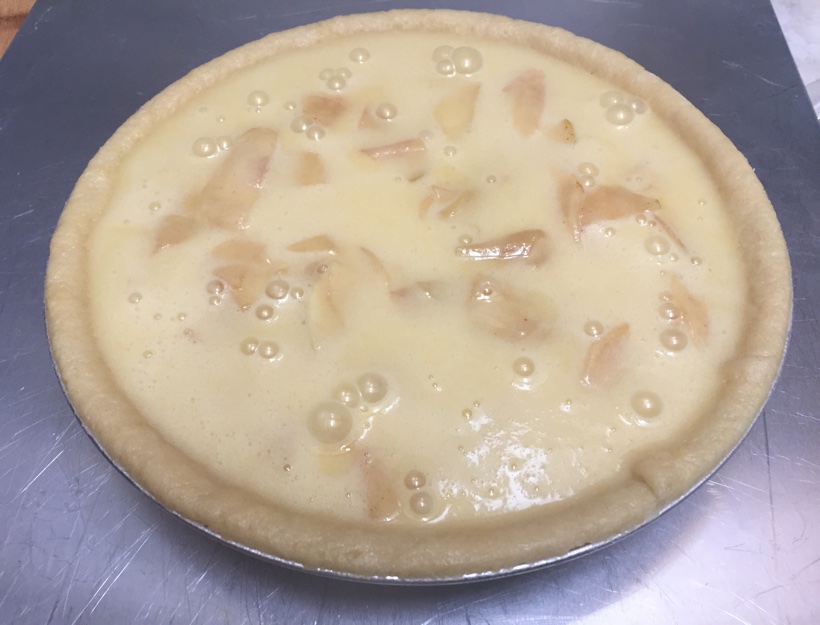 13. Place the pie pan on a baking sheet in case it spills over the edge.

14. Bake at 400 degrees F for 20 minutes. The custard should be starting to set and be golden on top when you take it out of the oven. Decrease the oven temperature to 375 degrees F. 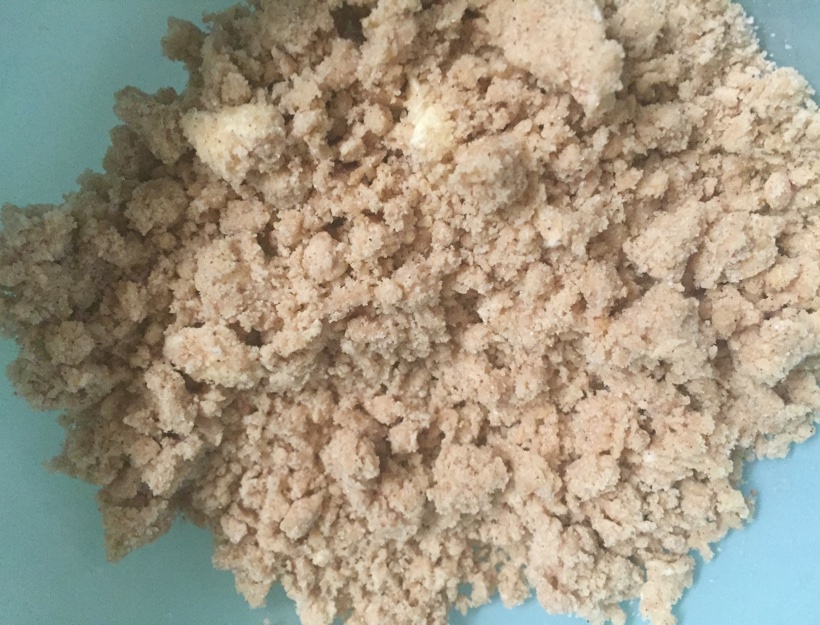 15. Meanwhile, make the streusel. In a medium bowl, whisk together 1/2 cup flour, 1 tablespoon pumpkin pie spice, and 1/4 cup sugar. Use a fork or pastry cutter to cut in 4 tablespoons of cold butter. Cut until you have pea-sized chunks of butter. Keep refrigerated until you are ready to add it to the pie.

16. Once the pie has baked 20 minutes, remove the pie from the oven and add the streusel topping. 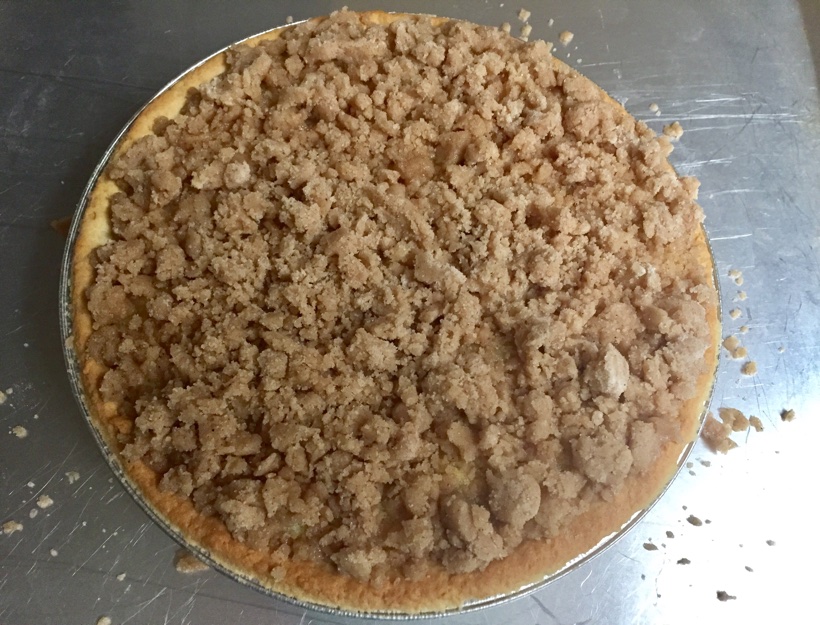 This was the first time I had ever eaten custard before, and it is definitely interesting. I don’t think I could eat it on its own, but in pie I am starting to become more open to the idea. The nice thing about this pie is that it has all the textures you want in a single bite. The crust is flaky, the apples are crisp, the custard is creamy, and the topping is crunchy. Though this pie has a lot of layers, they are easy to prep. This pie has something for everybody.
*