In September of 2017, this enormous photo appeared: a Mexican toddler peering over the border wall between Mexico and the USA near the Tecate border crossing about 40 miles south-east of San Diego. JR, a French photographer who goes by ‘JR Artist’, dreamt of this project, and its imagery still resonates today as border crossings are increasing with the new administration in the U.S. While exploring the location for placement, he came upon this toddler who resembled the one in his dream and he was granted permission to make and mount the photo.

Countless tales of the hardships of migrants and refugees exist in the annals of human history –  in the Middle East, Mexico, Cuba…

JR has worked for years to highlight the “Ellis Islands of today”, which has taken him from the shores of Italy where migrants have been arriving by boat from Africa, to the California desert. “Now as an artist I think that it’s amazing that the piece arrived at a moment when it creates more dialogue,” he said. “Because the idea itself is to raise more questions.” JR also made a short film in 2016 called, “Ellis“. The film stars Robert DiNero on screen and in voiceovers about the plight of immigrants to America – looking for a better life – and many not making it.

Consider for a moment the premise that a Renaissance ultimately enhances civilization. Is humanity currently taking the first steps onto a cultural bridge between the ‘modern age of industrialism’, passing through the Technological Revolution heading toward future history? Is this a Renaissance, commencing a global history from the 21st to the 25th centuries? What do we want to create? How do we want to feel? Or…

Is humanity simply following a natural continuation, the development of the Renaissance in which Europe began to cultivate a more mindful civilization? Initially, the surge of interest in classical scholarship and values led to a greater appreciation for the inherent beauty found in and created by humanity. Is humanity now naturally moving into the concern for values on a global scale?

In any case, migration/immigration is a natural tendency — in humanity as it is in other species. Migration of human populations started with Homo erectus moving out of Africa to Eurasia about 1.75 million years ago, and migration to the Americas bears a 20,000 to 15,000 year range in history.

Migration is based on need. Most often the need is to secure safety, food, shelter, or to procreate. Why do men, women, families take the risk of dying in makeshift boats, swimming, or scrambling on foot to reach another land? Survival, the most basic of instincts, is natural; migration too is natural.

Present migrations that relate to survival often are witnessed where groups of people flee from war-torn societies or are evident when people seek asylum from oppression by ruthless leaders. Conditions to flee also may include those in which certain segments of people are targeted for violence due to their personal religious beliefs or gender-related behaviors. Belonging to the category “immigrant” frequently includes dehumanizing perceptions.

Immigrants are more accurately recognized as human beings fleeing for survival or migrating in search of refuge, safety and even the slightest chance for a better life. A categorical description to classify a segment of society frequently deviates from its intention. The same lexicon of “the handicapped” whispers “incapable”, “recidivists” screams “incorrigible”, “welfare mothers” hints “lazy”, “victims of domestic violence” implies they are at fault or deserving of this violence, “the homeless” describes “unworthy street dwellers”, even “blacks” says “somehow deserving of fewer rights”.

Where classification originally is intended to increase awareness of vulnerable social status or illuminate sensitivity to specific social needs – intentionally or unintentionally – it ultimately backfires. Reflect for a moment around experiences where categories create the space to forget that each of these terms represents at least one individual fellow human being, and each individual who occupies such a category is unique. Perhaps acknowledge the potential slippery slope of divisiveness.

The view of immigrants becomes so distorted that they not are viewed as human. Instead, they are perceived as an indiscriminate mass of public enemies. Simply for being in search of survival, safety, and dignity, individual immigrants are perceived as villains by those who imagine their very existence is a threat to one’s own way of life. For example, this mass is perceived as a stress on social resources; even members are tagged with harboring malevolent intentions to take jobs, all are presumed to engender crimes and create havoc and threaten the status quo – members of this category often are perceived as guilty of endangering public safety. The airport announces that groups are prohibited from “converging near the women’s room.” Customarily, some cultures travel in large family groups – grandmothers, mothers, daughters, children of all ages, women are together. After a long plane journey, they regroup at the women’s room and for this they are targeted as dangerous? When the truth surfaces, if anyone is listening or observing, these voyaging or migrating individuals want only a good experience, family visit, food, shelter or opportunity for themselves and their children – like most humans.

Once people are seen in this way, their destruction becomes not only acceptable, but also apparently essential for our own group’s survival. Traditional social norms that prevent extreme acts of violence and destruction aimed at one’s own group become twisted and dissolve if a victim is a member of the “threatening” group. Or, moreover, there is seen to be no “victim”.

Such acts of violence even can be viewed as heroic by one’s own people who see them as valiant efforts to preserve their own identity and way of life.

This is far beyond politics, yet this example serves. Consider this: Was the former president, the most overtly anti-immigrant president in recent history, acting as the American hero who eliminates immigrants from America – the country founded, populated, built, developed and evolved by immigrants? Is this what the majority of Americans need or want?

In recent years, there has been some acknowledgment and institutional effort to address the adverse effects of immigrant labeling. Since 2013, the language referring to immigrants in the U.S. has shifted toward appearing to refer to a human. For example,“illegal immigrant” has changed to an “undocumented immigrant”, and “illegal alien” to an “undocumented worker” or “undocumented person”. Below, the information from a Pew Research Project reveals some progress. 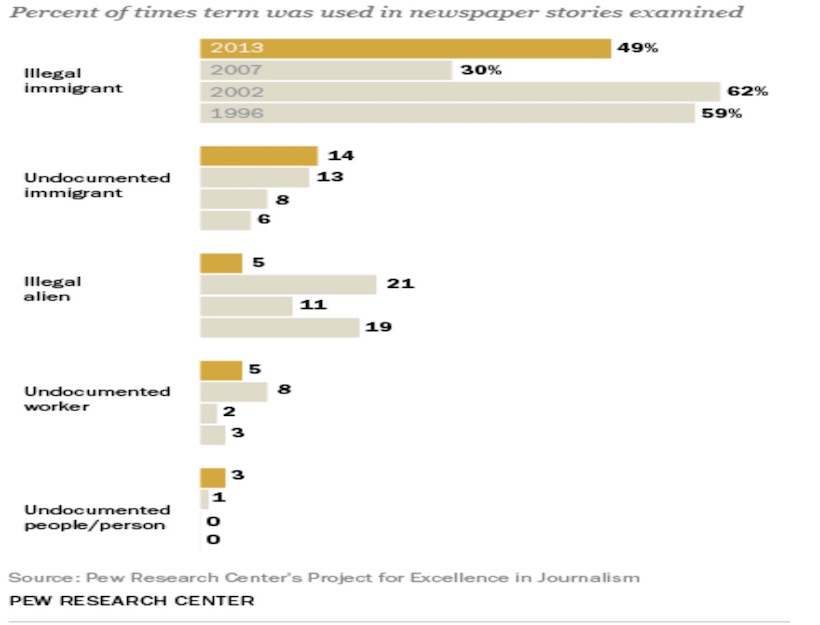 Percent of usage in terms referring to immigrants in the USA

What can divisiveness teach? What would it look like if social default adhered to the premise that human dignity is a birthright, independent of birth location? Human beings have a right to live. What if the social template for all humans was formatted to consider that immigrants are the same people who more accurately can be described as mothers, fathers, brothers, sisters, grandparents, cousins who are endangered in their precarious positions? To occupy a space in life in which threat of impending death is near or where the perpetual air of fear hovers as a reminder of fragility is unfathomable for most.

What if a global movement advances to embrace a truly unified value of the right to human dignity? If there is progress to expand human mindfulness and compassion?

Survival instinct yet remains the strongest and most agreed upon of human instincts. When survival is threatened, a human automatically defaults to life-risking efforts to survive. What can civilized society learn in order to advance a thriving global population? Clearly, there have been and will be many who urge societies to adopt fundamental values to support humanity: human dignity and diversity in unity. 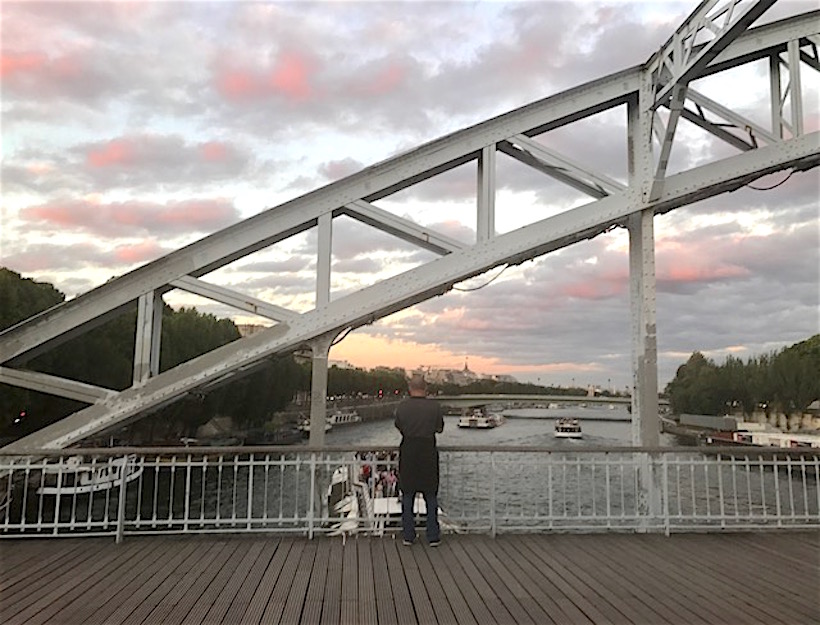 The Debilly pedestrian and bicycle passage, 120 meters long and 8 meters wide, was built in 1899 for the Universal Exhibition of 1900. It’s named after the Napoleonic general of Billy. The bridge was to be destroyed after the exhibition. Instead, the city of Paris acquired it in 1902 in order to preserve it. Choose to keep universal human dignity.
*

Editor’s Note: Parts of this story originally appeared on CultureHoney.com on September 19, 2017.