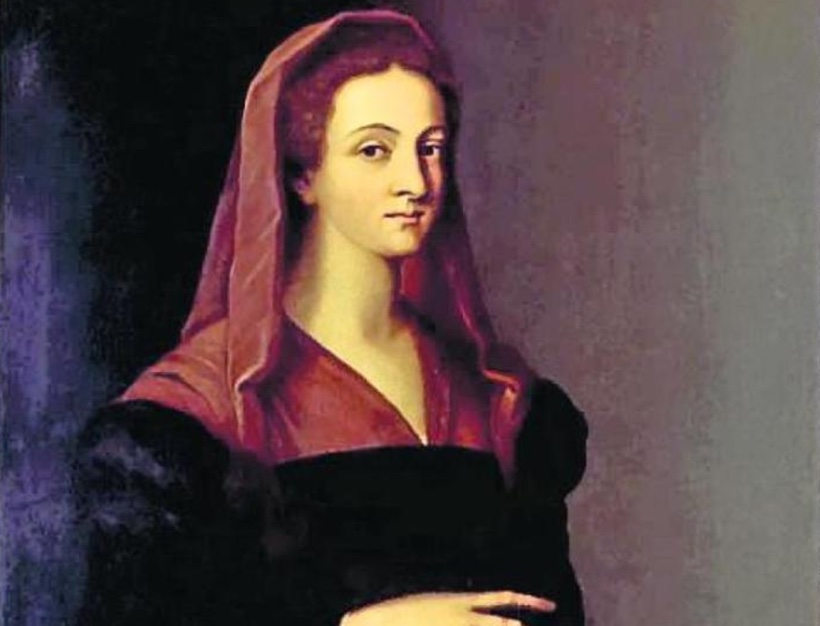 Giulia Gonzaga is another lost woman from the past who is worth knowing. She, like Vittoria Colonna, was a noblewoman of distinction in Renaissance Italy. Cousin and friend of the poetess, both women traveled in the same exalted social circles, were leaders in the reform movement, and were active as literary patronesses and writers. Where Colonna’s path to fame was poetry, Gonzaga’s early notoriety was due to her beauty. Tasso praised her with these words:

Her blond, undulating locks, mischievously straying with the breeze
Crown a forehead lofty and serene, beneath whose eyebrows dark
Lucid lights permit her from this terrestrial prison to behold the wonders of the Lord. (translated by R.H.Bainton)

Giulia Gonzaga was born in 1513 near Mantua, the city state ruled by the powerful Gonzaga family. At thirteen, she was married to forty-year-old Count Vespasiano Colonna, a military leader and cousin to Vittoria. However, the husband died two years later, leaving all land holdings and wealth to his fifteen-year-old widow.

Giulia established her court at Fondi where she instituted a literary salon patterned after that of Ischia. Leading poets from Rome and Naples flocked to there and Vittoria Colonna was a frequent guest. Suitors seeking the hand of the renowned beauty were present as well.

Ippolito de’ Medici, grandson of Lorenzo il Magnifico, former ruler of Florence, came regularly to these gatherings. This handsome lad, two years older than Giulia, eventually won her affections. However, the romance was interrupted by Pope Clement VII, who decided his nephew would serve the family ambitions best as a cardinal. As a churchman, hopes of marriage to the fair Giulia were dashed.

Meanwhile, the Countess of Fondi’s reputation as ‘fairest in the land’ had spread beyond Italian shores. In 1534, the notorious pirate Barbarossa planned to kidnap the maiden and present her as a gift to Suleyman, sultan of the Ottoman Turks. He sailed to the coast subsequently leading 2,000 soldiers by nightfall to the walls of Fondi. Warned of the pending attack, Gonzaga escaped to safety.

The following year, Giulia’s life would take a number of dramatic turns. In July, Ippolito laid down his cardinal’s hat and asked for the countess’ hand in marriage. Not long after, the young suitor became mysteriously ill. He died eight days later at the age of 24 with Giulia at his side. It is assumed that he was poisoned.

Adding to this heartache, the loss of her husband’s estates to her step-daughter drove the Giulia to relocate her household to the Convent of San Francesco della Monache in Naples. Like other aristocratic widows of this period, the former Countess of Fiori lived as an independent woman within the safety of the convent. There she presided over her second literary salon.

It was in Naples in 1535 that Gonzaga met another man who would play a pivotal role in her life. Juan Valdez was a theologian who had from the Spanish Inquisition. Settling in Naples, Valdez’s reformist lectures drew a wide circle of disciples, the chief of whom was Giulia Gonzaga. Through their mutual efforts, Naples became the hub of reformation activity and gave birth to numerous ‘spirituali’ groups throughout the peninsula. In addition, Giulia worked closely with Valdez composing an overview of his reformed teachings. When he died in 1541, he left his papers in her capable hands.

The Inquisition was reinstated in Rome the following year. As a close associate of the ‘heretic’ Valdez, the Countess was also under scrutiny. The label ‘heretic’ was applied to those critical of the church or suspected of holding differing religious views. Nevertheless, she initiated the publication of the Beneficio di Cristo in 1543. This book of reformed doctrine sold like hot cakes and became the work that most influenced the Reformation in Italy. Two years later, Giulia submitted Valdez’s teachings for publication. The Inquisition quickly added the two works to their list of banned books.

Giulia Gonzaga continued her reform activities through her later years despite increasing danger from the Inquisition.  Her death in 1566 came in time to save her from the heretic’s flames. Unfortunately, it led to the condemnation of one of her dearest friends. Piero Carnesecchi, a noted humanist, and secretary to Pope Clement VII had been under investigation for some time. When Gonzaga’s papers were confiscated after her death, the correspondence between the two revealed mutual reformist views. On October 1, 1567, Piero Carnesecchi was beheaded and burned as a heretic.
*