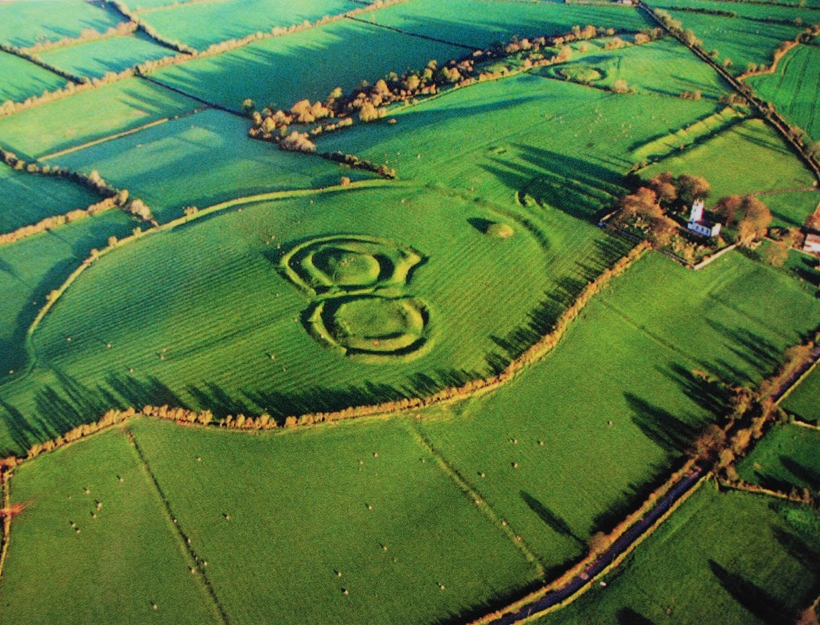 Among Ireland’s plethora of national landmarks, the Hill of Tara holds a place of singular importance in the island’s mythological and historical past, earning the nickname ‘The Soul of Ireland.’

This 500-foot hillside overlooking the Boyne River Valley in County Meath initially appears to be a barren landscape scattered with protruding stones and giant anthills encased in ripples of earth. In reality, 124 monuments lie within this 100-acre site. The 30 monuments visible today are proof of Tara’s pivotal role among 5000 years of Irish history.

Tara in the Late Stone Age

Ireland’s earliest settlers regarded The Hill of Tara as a sacred site, believing it to be the physical center of the earth, the home of the gods and the entrance to the afterlife. Its Gaelic name, ‘Teamhair’, means ‘place of great prospect’ or ‘sanctuary’.

Archaeological evidence reveals that the Hill of Tara was an important ritual site as early as the Late Stone Age or Neolithic Era between 4000-2500 BCE. Its prominent earthen monument, Mound of the Hostages, is a passage tomb built at about 3500 BCE, making it older than the pyramids of Egypt.

Excavations of the Mound of the Hostages provided vital information concerning this early period in Tara’s past. Archaeologists discovered 3 burial chambers and a passage framed by massive stones later covered with a mound of earth. Nearly 300 urns containing cremated remains were found within and around the tomb. There was evidence that the burials occurred over an extended period of time. The remains of the body of a young man were uncovered in the tomb, a possible victim of human sacrifice. 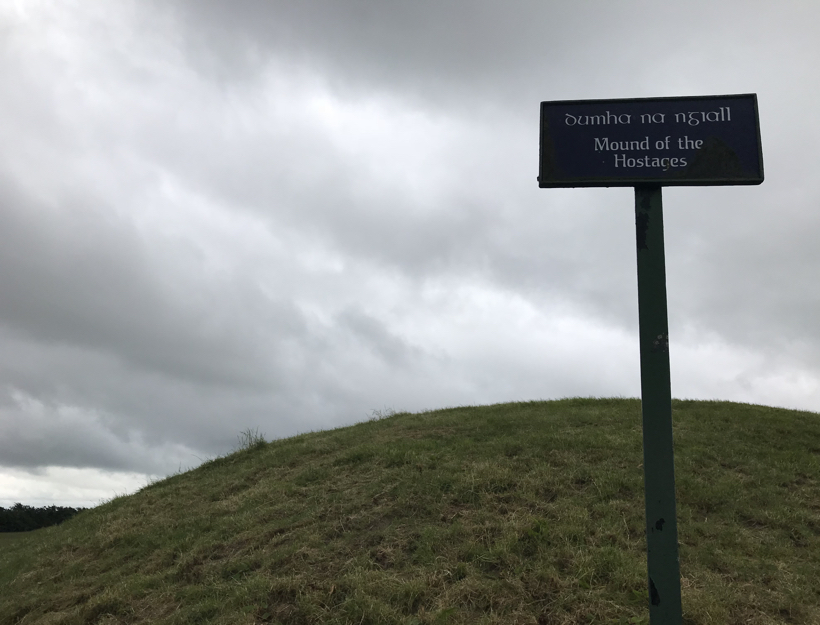 The passage extending from one end of the Mound of the Hostages to the other side was constructed to fill with light at sunrise on the two most significant dates of the ancient calendar, November 1st and  February 1st, marking the onset of winter and spring. This discovery indicates that the Hill of Tara was a setting for religious rituals in addition to serving as a burial ground.

A curious stone slab known as an orthostat, carved with spirals and other designs, stands within the passage. It is thought to be a map showing the locations of 12 burial mounds that stood upon the hill at approximately 3200 BCE. 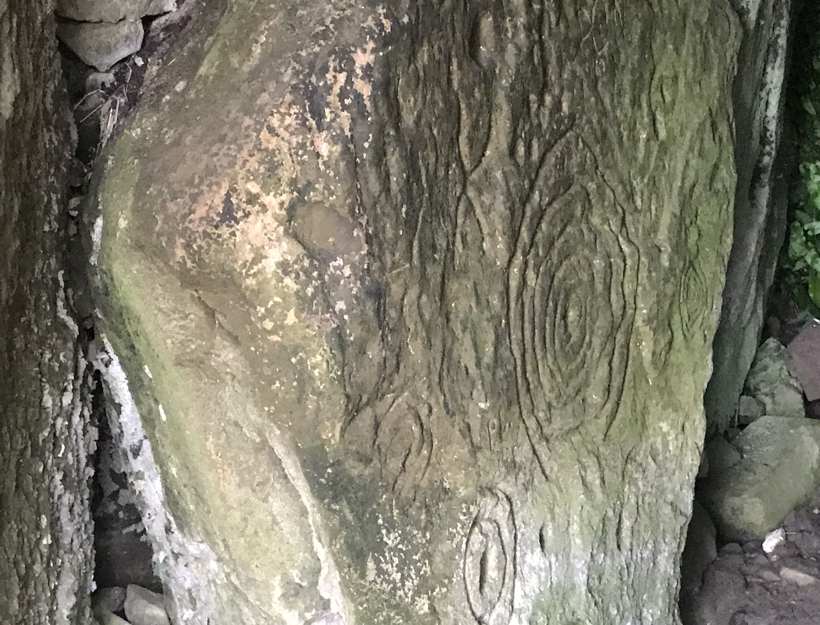 The Hill of Tara functioned as the seat of the High Kings of Ireland from 5 BCE to 11AD.

Celtic immigrants from Northern Europe began to dribble into Ireland’s wild wilderness in the 5th century BCE. This trickle of newcomers became a wave, washing over much of the island and leaving approximately 100 tribal settlements in its wake. A king ruled each of these family groups. The High King exercised political influence over these petty kings, their tribes and their land. The Hill of Tara was the place where the High King was crowned, held court and officiated over annual festivals.

Today, within an earthen enclosure called Ráith na Ríogh or ‘Fort of the Kings,’ two wooden ring forts had once stood. One is known as Forradh or the ‘Royal Seat’ and the smaller Teach Chormaic is named after the famous High King, Cormac mac Airt who is renowned for erecting the most impressive of Tara’s wooden hill forts somewhere between 2 – 4 AD. Within Ráith na Ríogh stands the most important of Tara’s monuments of this period, Lia Fail, the ‘Stone of Destiny’, where the crowning of the High King took place. According to legend, the Stone of Destiny was a type of oracle. When the foot of the warrior destined to be High King touched the stone, it would let out a thunderous scream that echoed throughout Ireland. It is claimed that 142 High Kings reigned from Tara between 3 BCE – 11AD. 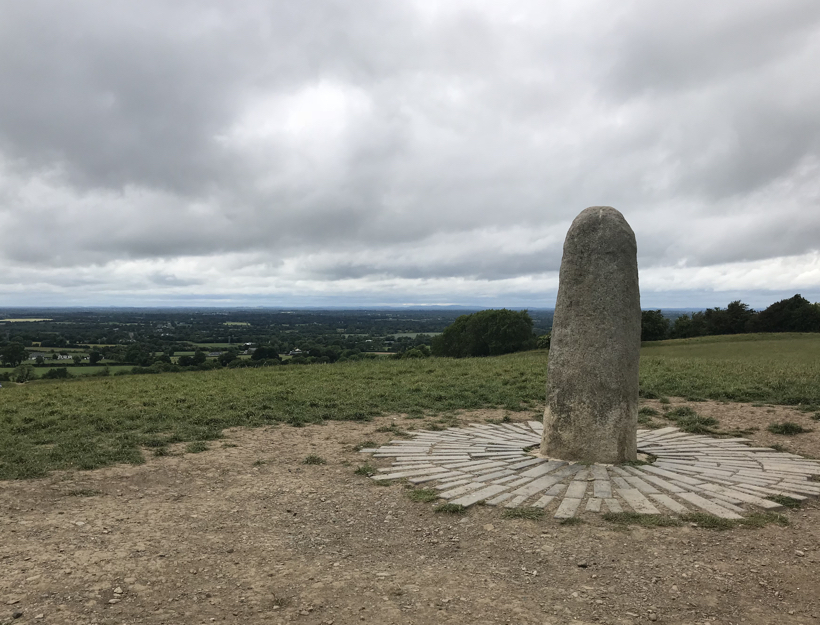 At the entrance of the Hill of Tara heritage site, a statue of Saint Patrick clothed in a bishop’s hat and stole stands tall and erect to welcome visitors. Saint Patrick’s church, a 19th century stone church and graveyard, lies beyond. Legend asserts that Saint Patrick came to Tara in 432 AD to ask the High King Laeghaire for permission to preach the Gospel throughout the country. The saint traveled throughout much of Northern Ireland preaching, starting churches and baptizing thousands. Saint Patrick is still renowned for his major role in converting the Irish to Christianity. 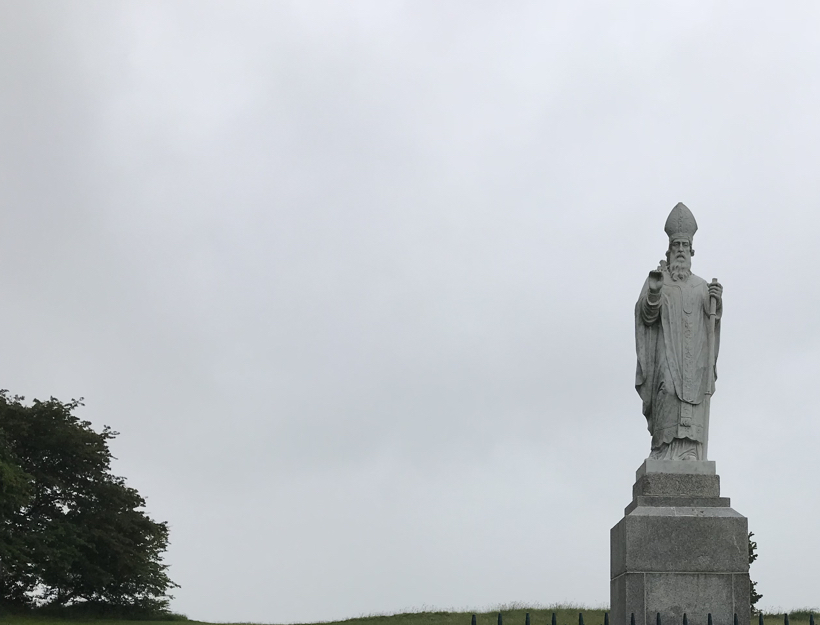 The Raith of the Synods is another monument at Tara that recalls the lasting influence of Saint Patrick’s mission. Excavations of the earthworks revealed holes and timbers used as the foundation for a large meeting hall. There are records that at least 3 synods (gatherings of church leaders) convened at Tara as early as the 7th century. 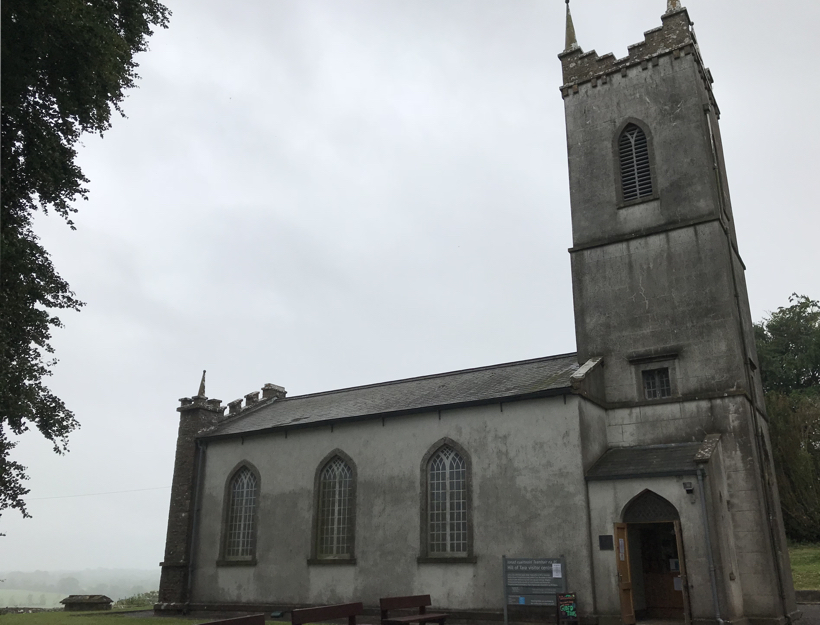 At least three churches dedicated to Saint Patrick have stood on the hill since 1190 AD. The current structure was built in 1822.

Tara and Ireland’s Fight for Freedom

When the Normans disembarked on Irish soil, King Henry II of England began to exert control over the land and its people. This resulted in oppressive domination by the British for hundreds of years. Inspired by the American and French Revolutions, a group of Irish nationals calling themselves the United Irishmen fueled an uprising that led to the Battle of Tara in 1798. The cross that stands on the summit of the hill marks the place where 400 of these Irish freedom fighters were slaughtered by British troupes.

England’s parliament retaliated by ratifying the Act of Union, dissolving the Irish parliament and usurping total control of Ireland. Frustration and fury ignited Irish politician Daniel O’Connell to act. Known as ‘the Liberator’, O’ Connell scheduled a series of freedom rallies at key Irish heritage sites. On August 15, 1843, as many as 1,000,000 Irish citizens gathered on the Hill of Tara to hear the great orator promote Irish Home Rule. Tara’s rally was the largest gathering of people to ever occur on Irish soil. That speech ignited a slow-burning ember that set aflame the Easter Rising in Dublin in April 1916.

Visiting the Hill of Tara

A light rain was falling when we made our visit to Tara in late June. The visitor center lobby was tiny and inadequate for protecting tourists from the elements. I chose to venture forth into the fog to soak in the mystery of the place while waiting for the video presentation to begin. 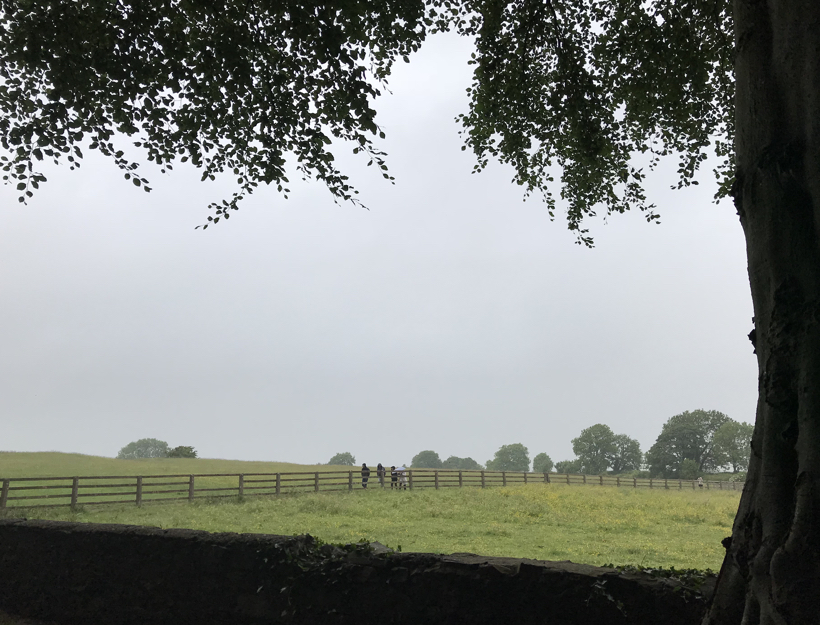 Layering in a wool sweater and rain jacket insulated me from the chill and damp. Upon entering the monument site, I faced one of several hilly embankments and steep trenches surrounding the hill and several monuments. My hiking shoes helped me remain upright as I climbed up and slid down the rain-soaked ground. Upon reaching the summit, the mist was swallowed by a brilliant blue sky uncovering a majestic and sparkling green Boyne River Valley. 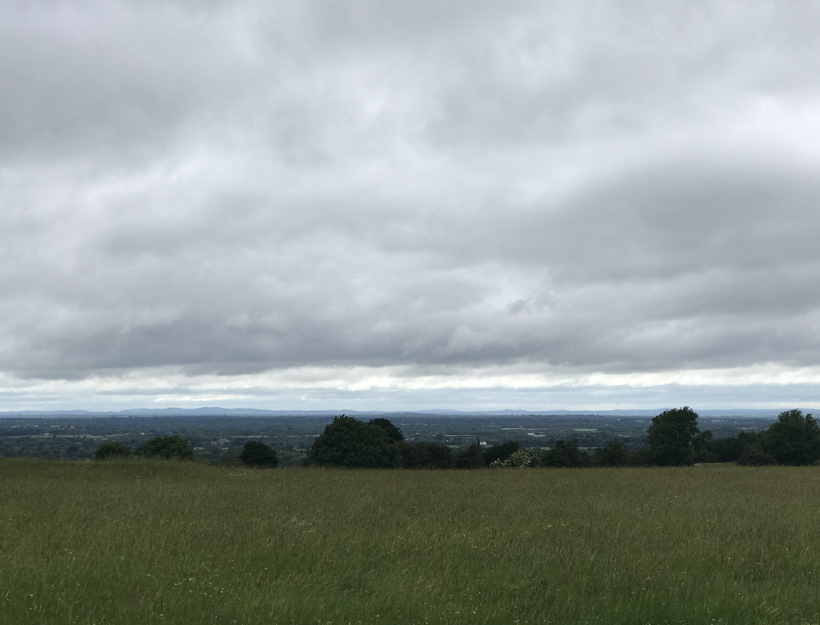 A row of white-faced cottages line the parking area house bathrooms, gift shops and Maguires Cafe where tasty farm-to-table fare is served. The visitor center, a short walk up the hillside in St. Patrick’s church, is open from 10 am to 6 pm 7 days a week where a twenty-minute video orients visitors to the outdoor museum beyond its doors. 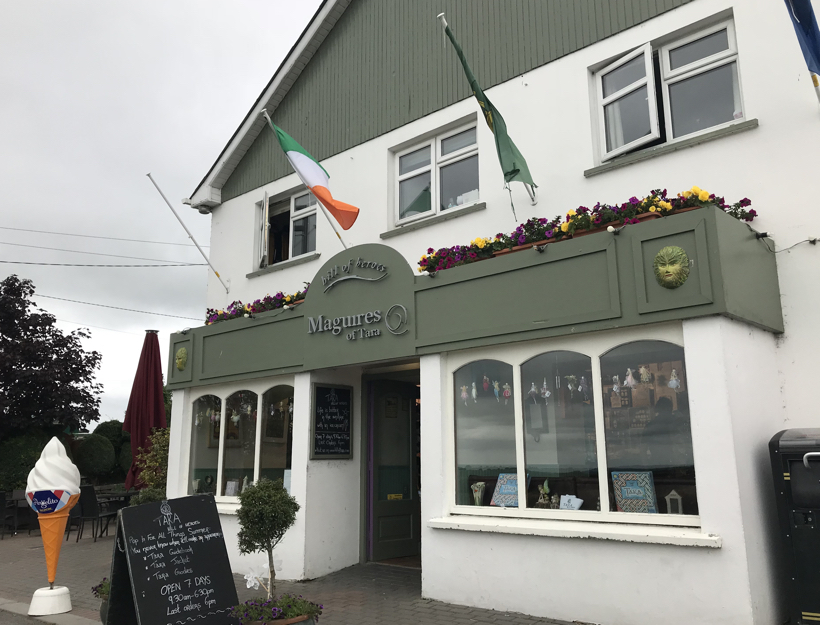 Admission to the Hill of Tara is free. A 45 minute guided tour is available at a 4 euro fee. I found the guided tour to be very helpful in navigating Tara’s monuments and understanding their historical significance.

Visiting the Hill of Tara is a pleasant day trip from central Dublin. The hour drive along the M3 highway provides a reprieve from the bustle of the city, magnificent vistas into the lush Irish countryside, as well as an overview of Ireland’s varied history.