“And I also knew that the YWCA helped to save my mother.”

“It’s only now during this period that we are beginning to recognize the pivotal work that women have done over the decades, over the centuries to save our world.”

But first – the So Cal context.

Joyous indulgence of anti-Black and racist conversation between three City of Los Angeles Council members, along with the head of arguably one of the most powerful labor union organizations — caught on a recording miles away from city hall.

Readers familiar with this column know that I usually journal about traveling while Black. Not this time. The Black Tax I’ve previously written about in Culture Honey didn’t require a TSA screening or taking my shoes off this time.

I didn’t have to travel. This was a stay-cation.

If you’re just learning about it, here’s how the headline read regarding the leaked audio of LA Council President Martinez on DA Gascón: ‘F**k That Guy…He’s with the Blacks’ on October 9th.

That was on Sunday. The audio recording revealed more details about the powerful elected. Martinez and Councilman Kevin de León made racially charged remarks during a talk with Council member Gil Cedillo and L.A. County Federation of Labor President Ron Herrera, in a conversation that focused on the politically sensitive process of redrawing council district boundaries.

The visceral hate and assimilation of Martinez, de León, Cedillo, and a Union Boss come as no surprise to some. But, for others, the now widely circulated secret recording has erupted into calls for all three to step down—electeds from across the region and nationally.

Is this an October surprise? An early trick? Or, a treat?

That’s for another column. But, at some point in this article, I’ll tie in Davis’ declaration of women’s place in history — and Martinez, front of the line pass — that no doubt will forever indite her as the (un)welcomed face of anti-Blackness post the largest social justice movement in history.

In fact, the anti-ness spared a few groups but was otherwise very much inclusive.  Listening to the near hour-long recording of the four as they plot to divide up LA’s Black Political Power base and intentionally endeavor to disenfranchise Black Angelenos. The fermentation of their power. Their insatiably appetite for power  — allowed each of them to meet and agree — on exactly how they would carve choice cuts from the reunión clandestina.

Well, I sort of just did.

“I am appalled that a child could be made into such an obvious racist stereotype.” ~ Dr. Angela Davis

“Let me say that so I guess I walked into a culture here in Los Angeles.” Dr. Angela Davis said as she stood before over 500 attendees at a mid-town Pasadena Hotel.

By Tuesday, all three would be hailed as the elected officials affirming anti-Blackness policies AND find themselves called out by the POTUS — and Dr. Angeles Davis – within 48 hours.

This was not the story.

But, well, it had to be addressed. She did address the heated topic of the morning. It was the chatter in many corners of the room. The story was trending globally. Demonstrations and protests begin at the residences of the caught-on-tape public officials.

Dr. Davis was in Pasadena to provide the keynote address for the annual breakfast charged with eliminating racism.

“For 20 years, YWCA’s Women for Racial Justice Breakfast has brought people in our community together for deep learning and action to advance racial justice.” Tara Peterson CEO said in a statement. According to the YWCA website, “This year’s Breakfast will continue that rich tradition and legacy as we gather around the theme of “Making the Improbable, Possible.” 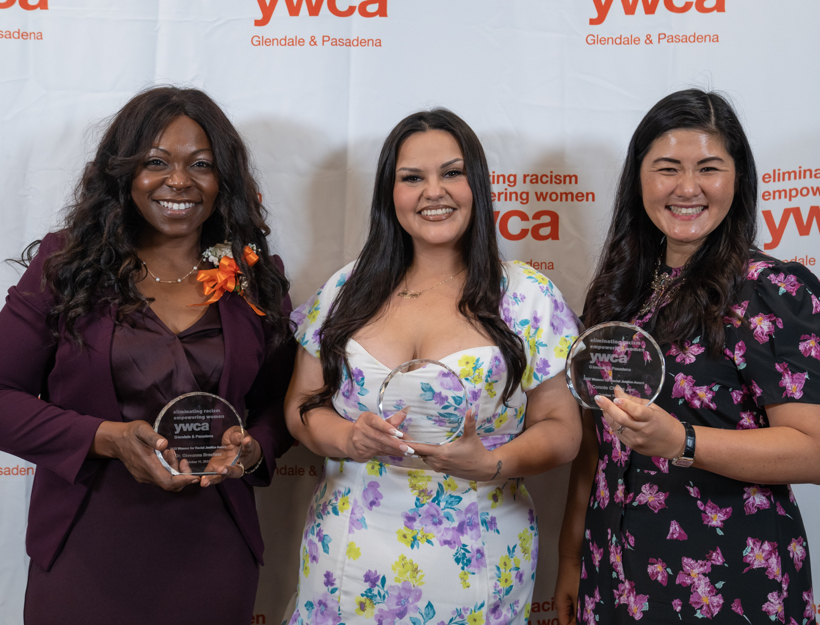 Peterson’s statement continued. “(At) YWCA Glendale and Pasadena, we demand a world of equity and human decency. We envision a world of opportunity. We commit ourselves to the work of racial justice. We will get up and continue to do the work until injustice is rooted out until institutions are transformed until the world sees women, girls, and people of color the way we do: Equal. Powerful. Unstoppable.”

This was the environment, before breakfast was even served.

The timing of the former Black Panther Party leader — once labeled public enemy #1 — Davis has been unapologetically speaking truth to power her whole life.

Later in her speech, she laid out her mother’s journey.

She’s more than the now iconic university professor or the storied accomplice linked to George and Jonathan Jackson. Which had sent her on the run from law enforcement in 1971.

Before she got into her 33-minute talk, the grand ballroom was primed with anticipation. 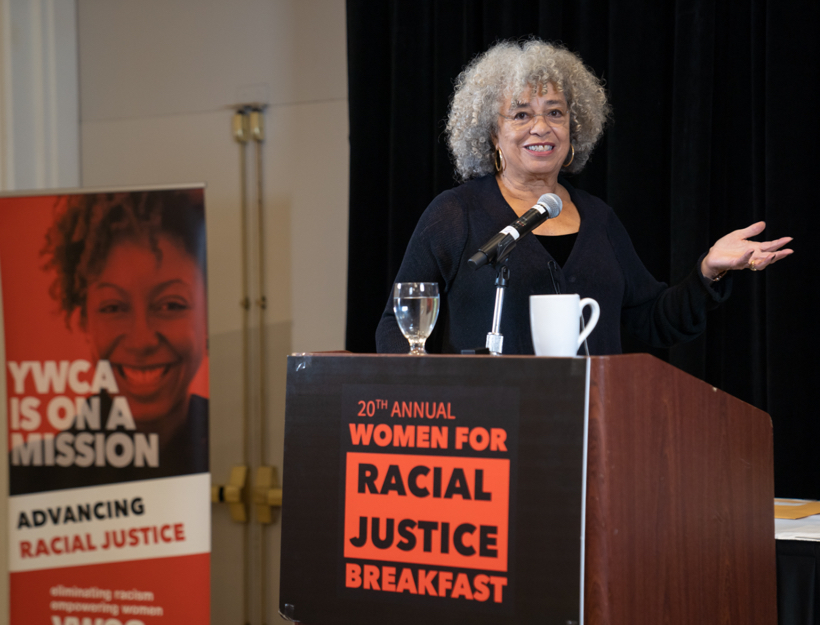 Davis went off script. “Regarding the conversation with the City Council President.“ Davis said, rather matter-of-factly, yet in her trippy–hip 60’s cadence of speech. “I am appalled that a child could be made into such an obvious racist stereotype.”

She continued, “Also the City Council’s president revealed racism against Black men in communities. And, I don’t think it’s possible to start simply with demands for resignations.”

Expanding her thoughts, she added, “Because if we really want to bring in anti-Black racism, anti-Asian racism, antisemitism, Islamophobia, and transphobia —all of these roles have been devastated by society.”

“It’s about changing the structure and the culture that continues to promote such ideas.”

Davis shared a story about her generational connection to the work and mission of the Young Women Christian Association. An intersection that spans back to the mid-20th century.

“I wanted to begin by acknowledging what’s happening here today. Because when one looks at history — it is an evolution. This phenomenal organization is always working for a better future.” Davis offered in reverence to the morning host organization.

And then she began to share her mother’s story – a tale that was life or death. A heroic odyssey of a young woman’s decision in Alabama’s Jim Crow customs and traditions.

“The YWCA helped to save my mother.” Davis’ mother Sallye was a foster child. Defiant against her foster parents, the assumption for the 13-year-old girl was that she should go to work and provide economically for the family.

“My mother literally ran away from home when she was 13 or 14 so that she could continue to work and get an education.” Traveling over 50 miles to Birmingham, she finally was able to get a room at the YWCA.

Sallye excelled in high school and college, then after my siblings were born she went to graduate school. Later on she also joined the work to free the Scottsboro Nine.

Davis also touched on her mother’s early involvement with the Southern Negro Youth Congress (SNYC), where she heard WB Dubois deliver his well-known oration “Behold, the Land” in 1946 in Columbia, South Carolina.

“But this is not the story I want to share with you,” Davis said, shortening up her remarks. She was mindful of the time allotted. Though it’s doubtful anyone in the room would have minded if she took as much time as she liked.  Davis got on message, adding, “The story I want to emphasize is a story of interrupted activism against racism, patriarchy, misogyny, and against capitalism.”

“The work that my mother did, and so many others, especially women, and also including white women – that work has never been lifted up. As a matter of fact, it is only now during this period that we are beginning to recognize the pivotal work that women have done over the decades, over the centuries to save our world.” 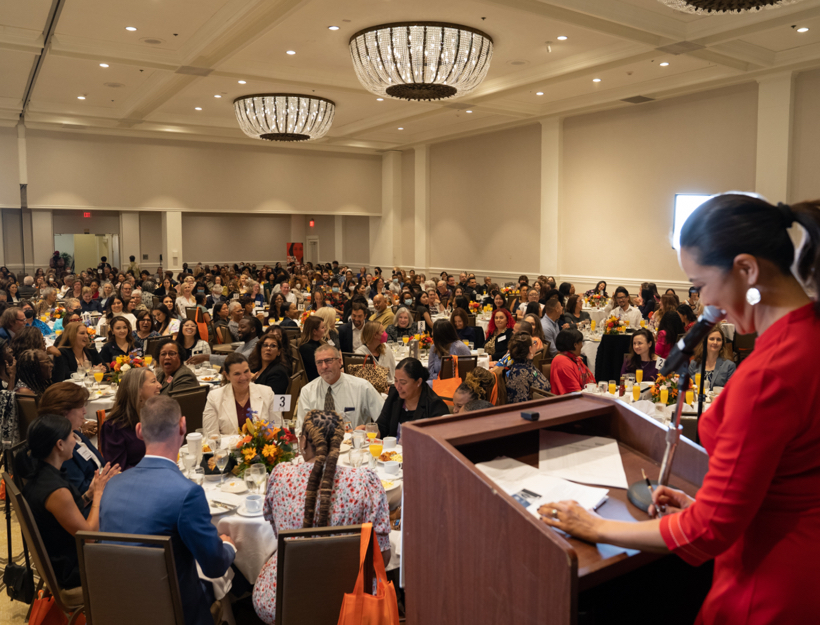 As I absorbed the historic nature of the morning’s speaker, I wondered to myself whether over the years Angela evolved or just intentionally no longer calls the police pigs. Not sure if the crowd was ready for that Angela Davis. It was in 1972, the then 28-year-old Davis was found not guilty on three counts (murder, kidnapping, and conspiracy) after a gun she owned was used in a shootout in which four people died. She had spent months on the run.

Given the current backdrop of the — ahem, latest documented attempt to marginalize the folks that Davis was edifying and raising up — also had some bitterness juxtaposed to Martinez, de León, Cedillo and Herrera’s caught on tape what many in the Black community believe “they were coming for us.”

What is the total impact of a person’s life?  Most in attendance were there to hear Dr. Davis. Me included.

But, how did she reach some of the younger ones in the room?

Bookending the wall-to-wall capacity room, were a couple of dozen students from Pasadena City College. It was as if Dr. Davis extended her long-reaching fist to the back of the room. The young scholars are a part of the college’s Communities Overcoming Recidivism thru Education (CORE).

“It was empowering to hear Angela Davis speak of her experience as a woman of color and how she continues to fight for equity among races. Seeing a role model of mine in person has encouraged me to continue to strive for excellence and to also find different ways to make a difference in my community”, Denise Flores, a first-year student shared. 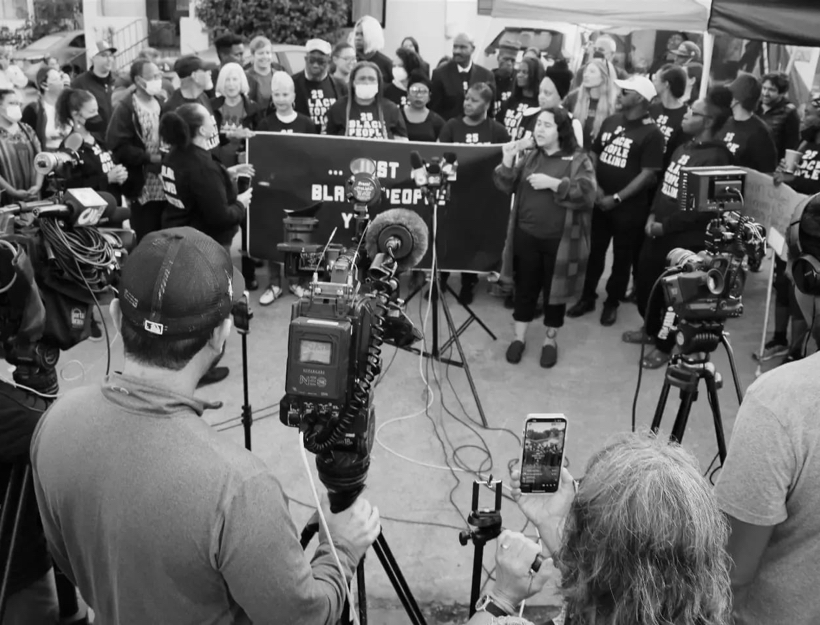 *Editors Note: At the time of this writing, key elements of this story are ongoing. Ron Herrera resigned on Monday, 10-10-22 and Council president, Nury Martinez resigned on Wednesday, 10-12-22. So far, both Gil Cedillo and Kevin de León have ignored mounting pressure from their constituents and others around the country calling for their resignations.