Any of these titles would fit Tony Hawk. But what many might not know is that before he became the skateboard legend he is today, he was a skinny kid whose father was too involved in the sport and whose tricks weren’t considered cool enough. That’s the story that’s explored in the new HBO documentary Tony Hawk: Until the Wheels Fall Off.

The film, directed by Sam Jones, unpacks Hawk’s family life and how being the “mistake” youngest child fueled his search for purpose. There are plenty of gems dropped subtly, like the fact that his first skateboard is in the Smithsonian, against the larger story of how his brother supported him from the very beginning.

“I feel like if I’m able to stand on my own two feet, I’m going to ride a skateboard. I’m not going to quit doing it.” – @TonyHawk

Tony Hawk: Until the Wheels Fall Off premieres tonight at 9PM on @HBOMax. #TonyHawkHBO pic.twitter.com/4vc93g7ztT

Until the Wheels Fall Off largely uses the metaphor of Hawk’s unswerving commitment to his tricks parallel to how he’s grown as a man. There are several scenes that, without context, would feel long as the audience watches Hawk fall over and over and over again in pursuit of landing a trick. But there’s always a lesson attached. The movie gracefully leads up to some of Hawk’s greatest accomplishments where those who know what’s coming get excited to relive the moment while a newer audience is allowed to feel the tension just like those who witnessed – especially one landmark accomplishment – in real time.

“I’m willing to struggle through the learning process, even change my approach, just to figure out how to do it,” Hawk said. “I never want to back down from a challenge. If you’re convinced that you’re going to fail, that will come to fruition. … I always approached it like, ‘This is going to work. I’m going to figure this out.’”

Along with the peaks and valleys of Hawk’s career, the film acknowledges the cyclical nature of skateboarding as a trend. One of the most gut-wrenching moments in the documentary is when Hawk’s hometown Del Mar Skate Ranch and rival turf the Pipeline in Upland are demolished. At one point in his life, Hawk notices he is losing so much money he has to sell his house, which means tearing down his backyard skate park with his own hands.

But any fan will know that’s not how the story ends. The excitement of Hawk’s Boom Boom Huck Jam Tour is celebrated as more exciting than any rock concert. The landmark video game Tony Hawk Pro Skater is noted as being one of Hawk’s greatest accomplishments, even if it’s given a brief segment in the middle of Until the Wheels Fall Off‘s focus on real-life skating theatrics.

Another important aspect of Hawk’s career, his Birdhouse brand, is also only lightly touched on for its humble beginnings in the early 1990s. The team is home to Clint Walker, Aaron “Jaws” Homoki, Ben Raybourn and Lizzie Armanto, who recently became the first woman in 20 years to have her own Vans skate shoe. Mentoring other skaters is a large part of Hawk’s legacy that was, unfortunately, one of the victims of the editing process. There’s only so much you can fit into a two-hour film. 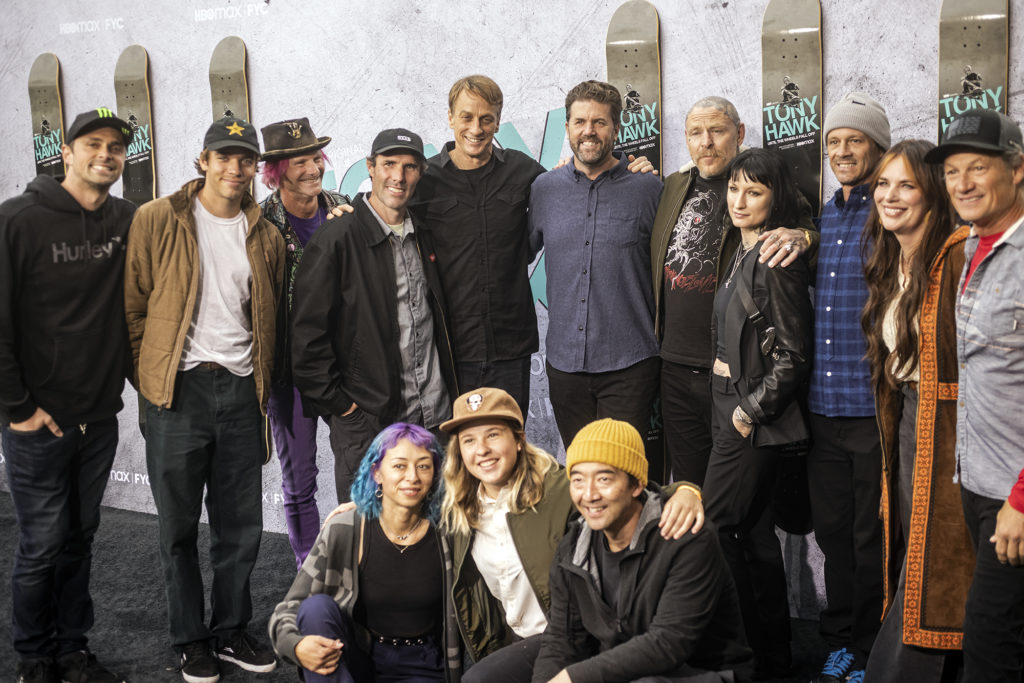 What perhaps makes up for it is the honest discussion of Hawk’s relationship with his family. He got married and had a kid young. In the film, he laughs as he recalled buying his first house while he was in high school. Life came fast at a young Tony. He insists that he didn’t get into skating to become famous, and throughout the project it’s evident that part of what’s made Hawk so great is his genuine nature. But, as would happen to anybody, the fame did get to him. Hawk looks back with sadness on the way he treated his oldest son, Riley, in pursuit of living up to the celebrity he had become.

Skateboard enthusiasts will delight in seeing so many greats interviewed. It’s a who’s who of skate history. Z-Boys legend Stacy Peralta recruited Hawk to the Bones Brigade team and revolutionized the industry with skate videos. Christian Hosoi departed from Bones to pursue his professional career independently, which left a spot open for Hawk, and the two competed intensely. Steve Caballero hazed Hawk when he entered the Bones Brigade and went on to have his own remarkable career, including being the namesake of the Vans Half Cab shoe. Mike McGill was the first to do the McTwist, the famous trick that separated the good from the great. Duane Peters was a top dog who Hawk dethroned and whose bitterness in the film exemplifies the negativity Hawk had to push through.

Each perspective provides a unique insight into the world of skateboarding, its organic nature, the intensity of competition and the tunnel vision it required to get to the top. Even casual fans will appreciate the fond memories and life lessons that these venerated athletes share.

The movie is about Tony Hawk, but perhaps we wouldn’t have modern skateboarding without Rodney Mullen. The fellow Bones teammate never felt a need to compete with Hawk since he was a freestyle skater. Peralta would send Mullen down to Del Mar to practice with the young protégé and their bond grew.

“Because we skated completely different, that made it easier for me to relate to him,” Mullen reflected.

What many fans might not know is that Hawk actually did quit competing at one point in his teenage years. His quick ascent at such a young age and the loneliness he felt left him drained. It was Mullen’s previous departure from competition that provided perspective for his friend to find his own love for skating again.

“I called Rodney and Rodney unloaded everything,” Hawk recalled. “He just said, ‘You know, I’ve come to appreciate the skating more. I’m willing to take more chances and risk not winning and that has liberated me.’ And he said, ‘Maybe that would help you.’”

With a deep breath Mullen added, “Detachment, freedom, you can breathe. We skate with our hearts. And it has its own feelings.”

Mullen’s interview segments are thoughtful and gentle. His answers speak from the soul and it’s evident how his deep spiritual connection with the sport kept them both grounded. That’s why Hawk, and many of these guys, are so committed to it.

As these legends ponder the value of their dedication to their craft, the question lingers of how much longer their bodies can hold up with the physical demand as they continue to push the boundaries of what’s possible. It’s ironic that Hawk broke his leg a month before the film was released. But the movie opens with Hawk going up a ramp trying to do a trick over and over and over again, settling on one shot where he is lying there frustrated while the skateboard rests alongside him, neon green wheels spinning steadily. They haven’t fallen off yet.
*