Family is everything. It is a message that is heard again and again through all forms of media whether that be books, shows or in video games. Brothers: A Tale of Two Sons uses this message and is able to create an unforgettable tale with it thanks to its beautiful music, well thought out mechanics and a story that will touch any player’s heart.

The game follows the story of two brothers: Naiee, a blonde, naive younger brother, and Naia, his older, more level-headed brother. It starts out with them learning that their father has become seriously ill. No matter what the doctor tries, nothing seems to work so he shares the news with the pair of siblings, telling them that the only way their father will live is if they collect water from the tree of life. Without hesitation the brothers embark on this journey with dangers unknown, all in the name of family. 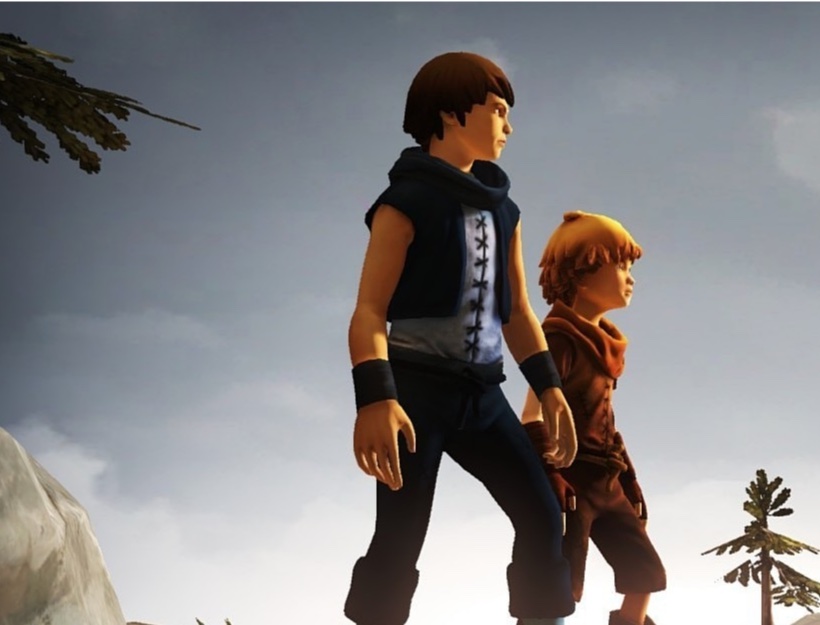 Throughout the journey the two brothers wander through their village, traversing hills and mountains and facing perils that range from a bully to wolves to members of some sort of tribe that performs sacrifices. Not all people they meet on their journey are malicious or wish to hurt them though. Good souls like an inventor and a pair of trolls are not only kind but end up aiding the siblings on their quest for the water of the Tree of Life. 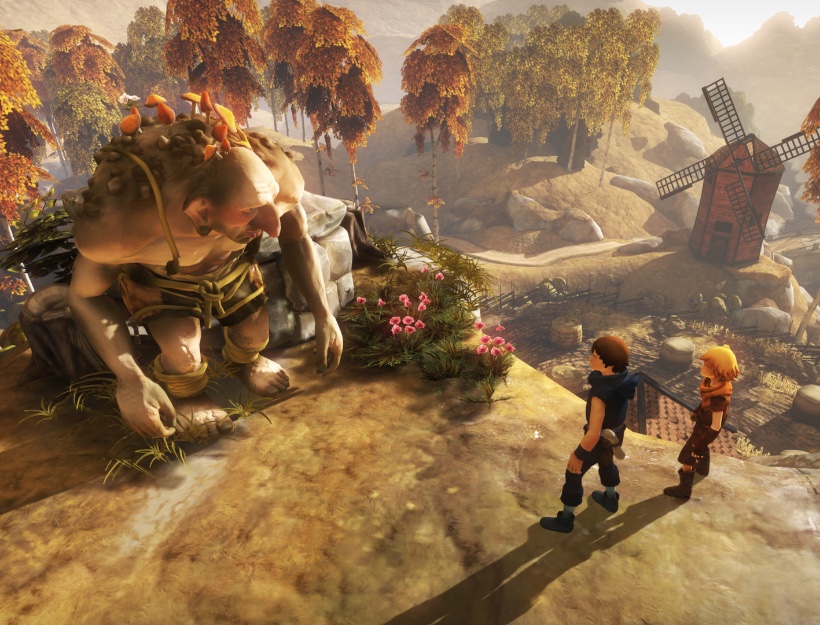 One of the ways this story immerses you into the world and makes you want the brothers to succeed is through the soundtrack. The beautiful tracks include ones that evoke emotions in you through the vocals of the singer while other songs within the game help show the danger that may come to the brothers. All of this helps invest the player in striving for the success of the brothers’ quest, cheering them along the way and hoping that despite all the odds they will be successful. But it is not only the music that makes this game stand out and causes you to get swept up in the tale. Another strength of this game is the fact that it has no spoken words. Each part of this story from the opening shot all the way up to when the credits roll, spoken language is not used. That isn’t to say that characters make no sounds at all, instead they use a language exclusive to this world with no translation provided.

One may think that this would weaken the story and make it harder to follow but that is far from the case. The emotion within the actions and moments created with these characters show how far unspoken storytelling can go. While other video games have a more realistic looking style to them, showing off how expressive minuscule emotions can be on the face, this game has a more minimalistic art style. Yet through well-thought out animations they are able to capture raw, powerful emotions that all of us can relate to. 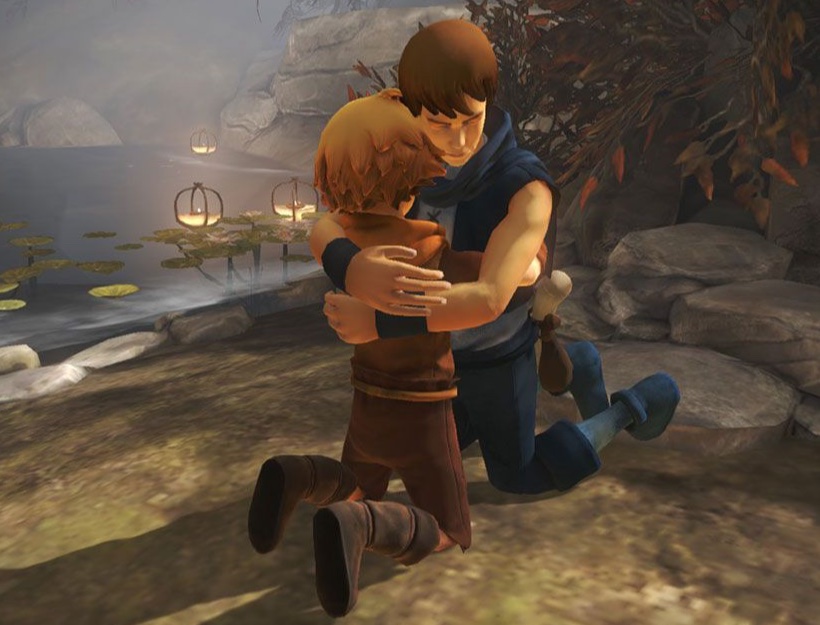 Starbreeze Studios didn’t stop there in terms of bringing the story to life. One of the starring aspects of this game and what sets it apart from others is the fact that you control both brothers simultaneously. Using both of the analog sticks you guide one brother with the left and the other with the right. The only way you can continue through the obstacles and puzzles of each new area is by getting the brothers to work together. This deepens your bond to both of them while also cementing in your mind how much these two need and care for each other. The mechanic has been praised for its simple yet unique way of immersing the player into the world and investing them in this story. It is a bit difficult to get used to using both thumbs to guide the two brothers simultaneously but after a while it becomes normal for you and you start to forget that games could be played any other way. 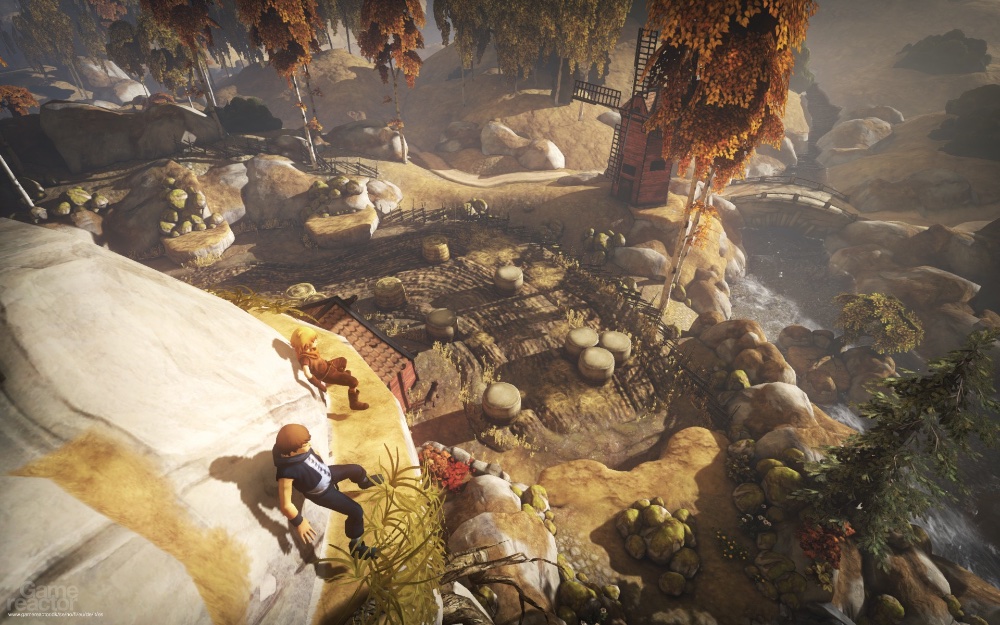 The unique gameplay and the sense of camaraderie that bubbles forth in the player’s mind because of it becomes one of the biggest contributions for the gut punch that is the ending of this game. As the brothers get nearer to the Tree of Life they stumble upon a tribe that is set on sacrificing a girl. The brothers being the kind-hearted people they are, rescue her and that seems to be the end of it. That is until the older brother, Naia, becomes infatuated with the girl and follows her to a cave, a decision that ends up costing him dearly. The girl reveals to be a spider lady. Despite the brothers’ best efforts and the fact that they defeat her, Naia is fatally wounded in the fight.

Still the pair of siblings push on to the Tree of Life and when the younger brother goes up alone to retrieve the water he returns to find his older brother dead. He tries desperately to save him but it is too late. Now the player, after experiencing an emotional gut punch of a scene, is left with a heartbreaking realization that they now only need to use one analog stick. After all this time of using both it feels off and unnatural to be using only one. This along with the heart-wrenching music make it tough to see the screen through your tears. As Naiee wanders towards the water he is hit with the realization that he has been relying on his brother since he can’t swim; the player is also weighed down by this painful truth. It is only by using the analog stick assigned to the older brother that Naiee can safely swim, Through this beautiful yet painful mechanic you can understand that his brother’s spirit is helping him back home.

Games like Brothers: A Tale of Two Sons are ones I recommend everyone to play. Whether you are interested due to the unique mechanic, the story or to see if this game will touch your heart too, this game is well worth your time. It is also a game that is widely available on a plethora of platforms such as Playstation 3, Playstation 4, Xbox One, Nintendo Switch and Microsoft Windows to name a few. Even if you don’t have a console, you can pick it up either on the iOS or Android so nothing is stopping you from experiencing this story. As a quick highlight, right now on the Playstation store Brothers is down to the low, low price of $3.99 which is an extremely good steal that lasts until  the 22nd of December. So what are you waiting for? If you are ready or looking for an unforgettable journey that will touch your heart, give Brothers: A Tale of Two Sons a try.
*