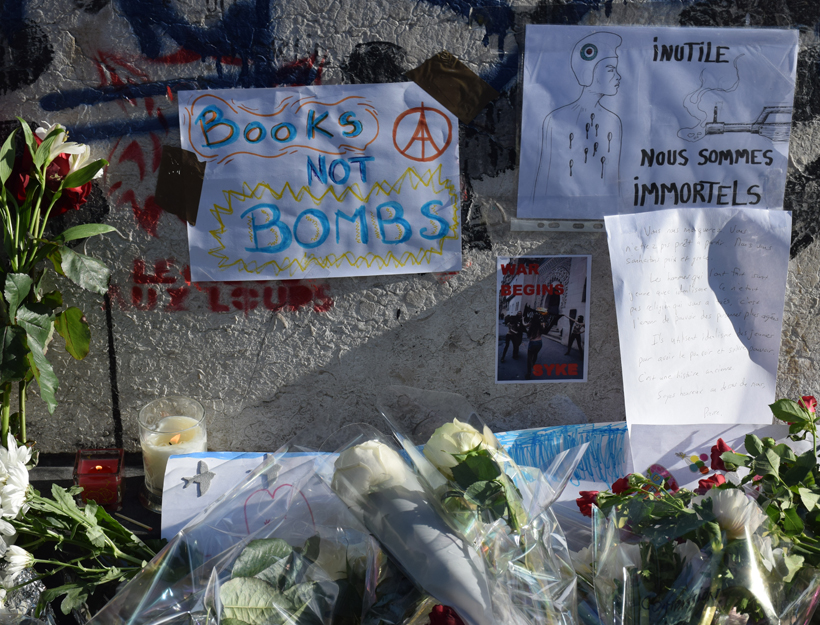 “Booties on the ground!” My daughter shouted up the stairs as I was looking for my grand-babies little shoes before we headed out on an outing in some wet, cold weather. I found the little booties on the ground as she had instructed, but all the while I was thinking of the other phrase: “Boots on the Ground!” The meaning of going to war, sending our young people in the path of bombs and bullets to send out their own bombs and bullets on “the enemy”.

The world continues to ignite in firestorm after firestorm. Horrific acts of terrorism and war. Violence in our streets and in our schools. Natural disasters leaving misery and grief in their wake. It would be easy to lose hope, but that is one thing we cannot afford to lose. We could do with losing some anger, hate, bitterness, revenge, fear and the like. Those really need to go, because if we continue to feed them they grow, and we suddenly become the very thing we hate or fear. There is a spiritual law that is not unlike the natural law of sowing and reaping. You plant an apple seed, you get an apple tree. You plant the seed of hate, that is what grows. I do not think we can stop the wars and violence in our societies with more violence. It is not working!

We continue to have more war and violence instead of less. I heard a short clip by Nobel Laureate Shirin Ebadi:

She said if we would have thrown books instead of bombs, we would not be in this place we are now with ISIS. Well, we didn’t throw books, we threw bombs on Iraq and Afghanistan. Is it too late to undo this? What can we do to stop this violence?

Back to the Booties. Are any of us adults considering what we are doing to the children of this world? What if those in Booties could vote? Make war or make peace? Have you seen these compelling photos of where Syrian children sleep?

Where do the Syrian Children Sleep

Please take some time to look at this photo montage above. What would their vote be? Make war or make peace?

Making peace is not easy. It is easier to flow on tides of hate and revenge. It takes great effort and humility to make peace. It takes searching our own hearts. Where have I been in error? Where have I disregarded another people different from my own? It takes great courage to walk towards our enemy unarmed.

The bravest man I know did not arm himself to the teeth with weapons, or call in a numberless army to surround him on his assault against evil. Instead, he picked up his cross and headed toward a hill. He did the hardest work of sacrificing himself to make peace for his enemies to know love. In doing so he stopped the spiritual forces of darkness arrayed to destroy mankind. He was the same wise-man who said, “If we live by the sword, we will die by the sword.” At another time, he put a little child in the middle of his followers and asked: “Do you want to be great? Then become like this little child.”

This is my call today. “Booties on the Ground!” Let us become like children and choose what is best for them. I think we all can agree that peace rather than war is best for our little ones.
*