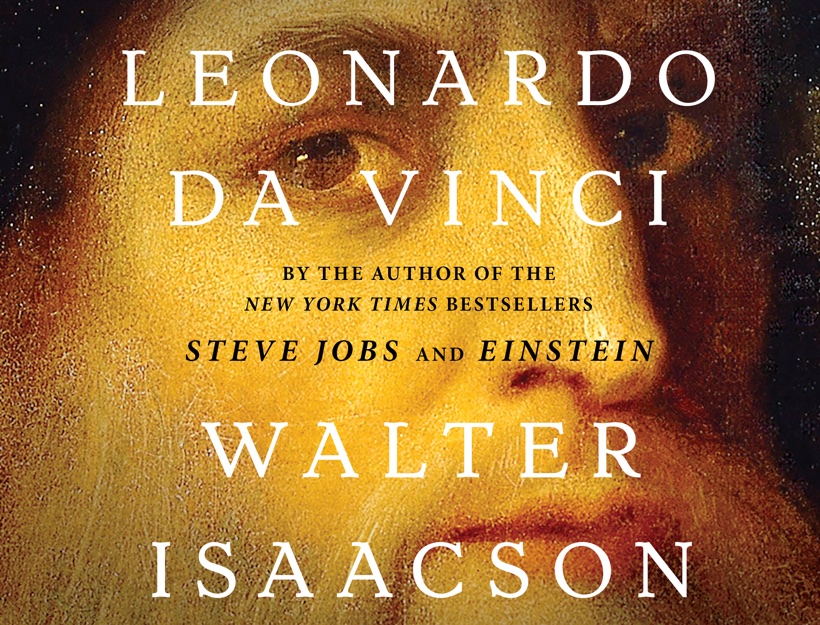 While rushing along Terminal C at Logan International Airport, I caught my first glimpse of Walter Isaacson’s new biography about Leonardo da Vinci. Leonardo’s face on the cover surrounded by golden light beckoned me. I reverently lifted the massive tome from its display shelf and cracked it open. Sketches from the master’s notebooks danced among the end papers. Colored reproductions like red traffic signals caused me to stop and linger over the portrait Lady with an Ermine and the image Salvatore Mundi. I glanced at my watch, reluctantly replaced the volume on the shelf and hastened to my gate.

Leonardo da Vinci by Walter Isaacson is a big, beautiful biography of the man many consider to be the embodiment of the term ‘renaissance man,’ a person who displays knowledge and skill in a variety of disciplines. Within 599 pages, the author recounts the life story of this polymath, provides detailed descriptions of his art, and discusses the projects and scientific investigations recorded in his notebooks.

Walter Isaacson took on a major endeavour when he decided to write a book about a man whose life has been obscured in mystery for over 500 years. Yet by relying on primary sources and integrating the most recent scholarship, Isaacson was able to weave a comprehensive and up-to-date biography of this master. He unveils newly discovered facts that had eluded generations of Leonardo scholars, such as the true identity of Leonardo’s mother. The text is rich in detail, informative, and where facts are sparse the author provides his own insightful perspective based on his personal research.

Leonardo da Vinci is not only informative, it is a visual feast. Full page colour reproductions of Leonardo’s paintings are presented clearly and in rich detail among pages of text printed on snowy, thick paper. It includes numerous sketches as well as full pages from the artist’s notebooks. The quality of the reproductions enable Leonardo’s art to speak for itself while illuminating the author’s story. It is fitting that a volume focused on the life of one of the greatest artists that ever lived be clothed in beauty.

Impressed as I was with the meticulous research evident in Isaacson’s portrayal of da Vinci, I was aghast that a commitment to historical accuracy was not carried throughout the text. For instance, in the portrayals of two of Leonardo’s contemporaries, Michelangelo and Lucrezia Borgia, the author seems to rely on myth rather than hard facts.

On several occasions, Isaacson compares Leonardo da Vinci to Michelangelo. When making a comparison between the artistic processes of these artists,  Isaacson states that unlike Michelangelo, Leonardo enjoyed camaraderie with other great minds. With this statement, the author seems to have adopted the portrait of Michelangelo as a loner. This myth is based upon Irving Stone’s novel and the popular film The Agony and the Ecstasy. The truth, however, according to Michelangelo scholar William Wallace, is that Michelangelo enjoyed many close and enduring friendships throughout the course of his long life. “It is a prominent aspect of his personality: Wit, humour, and aphoristic wisdom…” (Michelangelo: The Artist, the Man, and His Times, p. 175), which was enjoyed by a wide circle of friends. Michelangelo’s artistic collaborations with poetess Vittoria Colonna and artist Sabastiano del Piombo are only two examples of the creative camaraderie enjoyed by Leonardo’s rival.

Another historical error involves Isaacson’s description of Lucrezia Borgia, daughter of Pope Alexander VI. He refers to her as “the notoriously beautiful and evil Lucrezia Borgia…” It is true that Lucrezia has been historically portrayed as an evil woman, a label that was erroneously construed during her lifetime. According to Borgia experts Sarah Bradford, Sarah Dunant and historian Christopher Hibbert, the slurring of Lucrezia Borgia’s reputation stems from bitter gossip spread by her first husband Giovani Strozza. Feeling humiliated and resentful when Pope Alexander pressured him to divorce Lucrezia on the false grounds that he was impotent, Giovanni insisted that the Pope just wanted his daughter for himself (The Borgias and Their Enemies, p.113).

Reading is one of my favourite pastimes. What I look for first and foremost in any book, whether fiction or nonfiction, is a ‘good read.’ Sadly, I didn’t find Isaacson’s book to fit this category. At times, the reading seemed ponderous. The detailed art and notebook commentaries were often redundant and detracted from the storyline. Isaacson stated that he approached the task of writing this biography by starting with the notebooks. On several occasions, I found myself lost in the minutia of the notebooks rather than feeling that the digressions added to my greater understanding of the man.

Leonardo da Vinci by Walter Isaacson is a beautiful and informative book. It provides the latest research on the great artist and clears up some of the thorny mysteries surrounding his life. It presents a thorough portrait of Leonardo, displaying Isaacson’s skill for research. Despite a few historical misrepresentations, the book makes valuable contributions to the fields of art history and the Italian Renaissance. It is also a book that one can enjoy for the visual pleasure alone.