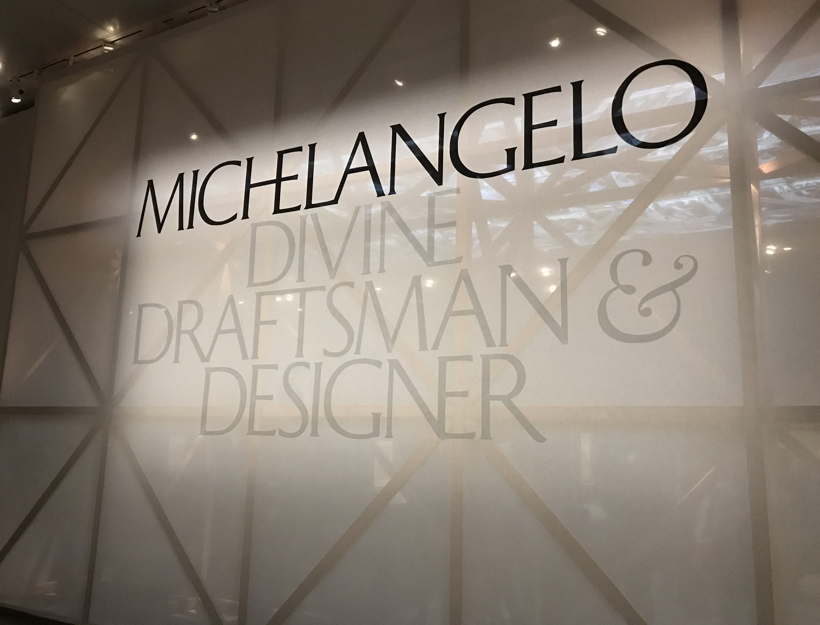 A once-in-a-lifetime opportunity to view 133 works by the great Renaissance artist Michelangelo Buonarroti at one time in one place was offered by the Metropolitan Museum of Art in New York City from November 13, 2017 through February 12, 2018. For the exhibition, Michelangelo: Divine Draftsman and Designer, the MET gathered 200 works of art from across the globe by Michelangelo and by artists associated with him. While Michelangelo was renowned as a sculptor, painter, architect and poet, this show focused on a lesser-known skill of this Renaissance genius, his drawings.

Il Divino, the ‘Divine One.’ 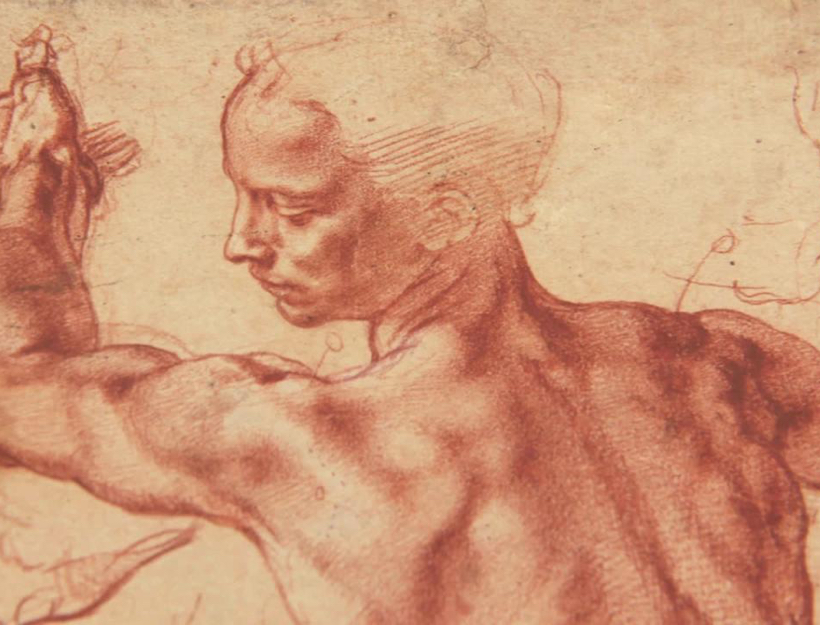 Michelangelo Buonarroti lived from 1475 to 1564 during the High Renaissance. He spent his formative years and received his art training in Florence, Italy, the epicenter of Renaissance art innovation and production. Inspired by the ancient Greeks and Romans, Renaissance artists produced unprecedented works in painting, sculpture and architecture. Michelangelo mastered all three of these major artistic disciplines. Thus Michelangelo, like his giant statue of David, towered above his peers, earning him the nickname ‘Il Divino’, ‘the Divine One.’

The title ‘Il Divino’ was first applied to the artist by leading poet Ludovico Ariosto in his famous poem Orlando Furioso in 1516 and continued to be attached to him throughout his career.

“…he who equally sculpts and paints, Michel,

Over 100 Michelangelo Works Under One Roof

Michelangelo: Divine Draftsman and Designer displayed 128 of the 600 drawings attributed to Michelangelo known to exist. In addition to the drawings, the exhibition included one of the artist’s early paintings, 3 of his sculptures, a wooden architectural model of a chapel, and several of his sonnets. 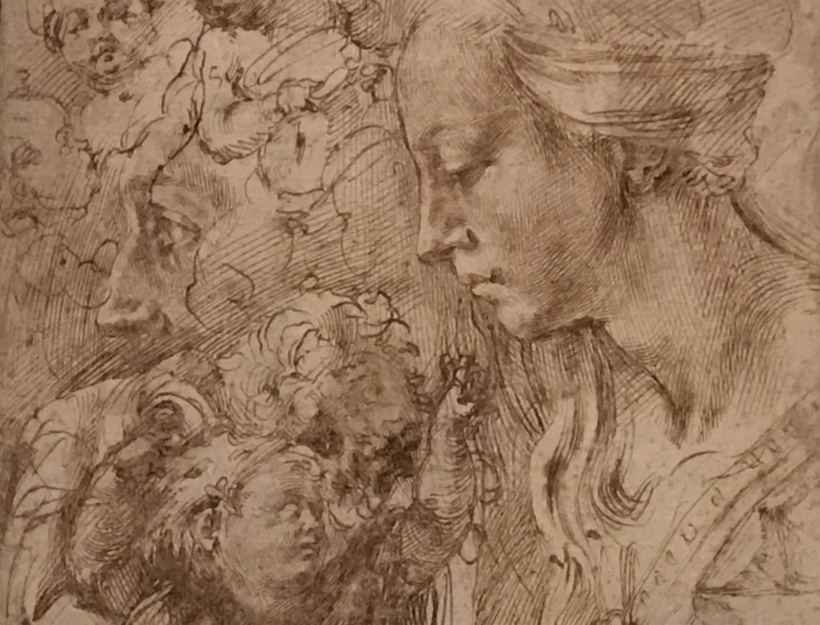 The variety of drawings chosen for the exhibition provided an intimate window into the man and his artistic process. Included were doodles, thumbnail sketches, studies of body parts (legs, arms, torsos, and feet in various poses), cartoons (layout designs for large works), technical architectural drafts, as well as fully polished drawings considered works of art in their own right. Each one gave testimony to the artist’s keen abilities of perception as well as his outstanding talent in drawing. 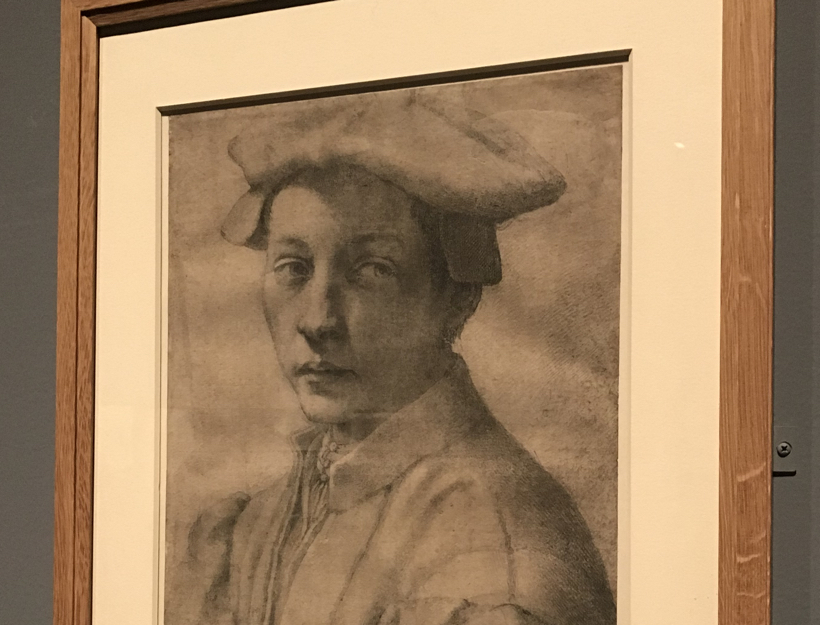 Within Michelangelo’s Florentine art community, the one skill considered paramount for an artist was disegno. The Italian word disegno referred to skill in drawing as well as the creative concept behind the drawing. By including drawings associated with the wide range of Michelangelo’s artistic productions, the exhibition demonstrated the foundational role of paper and pen to each finished masterpiece. It was the artist’s initial step for every creative endeavor he undertook. Drawing provided a way for the Florentine to think on paper, map out designs, and experiment with forms and movement.

Michelangelo considered himself to be first and foremost a sculptor. The drawings reveal a rounded, three-dimensional perception of the sculptor.

Documenting an Extraordinary Life and Career through Drawings

This exhibition displayed Michelangelo’s drawings in chronological order for the most part, beginning with works he produced as a teenager to sketches completed a few years before his death at the age of 88. This arrangement helped the viewer to follow the artist’s creative development throughout his career spanning nearly 70 years.

The journey into the world of Michelangelo began with works the youth produced during his apprenticeship to Domenico Ghirlandaio. These included studies of figures by artists the boy admired such as Masaccio, Giotto, and Donatello, as well as sketches he made from drawings by his instructor. By including a number of original drawings by Ghirlandaio, the exhibition revealed the teacher’s positive influence upon his student as well as the student’s ability to exceed the work of his teacher.

From here we were introduced to the young artist through his preliminary drawings for the fresco of the Battle of Cascina, planned for the Signorina in Florence. This was followed by a room filled with drawings used to teach students, those created for associate artists, as well as gift drawings prepared for friends. Another section of the exhibition focused upon architectural drawings and another featured Michelangelo’s drawings of Christ’s crucifixion and resurrection, religious themes prominent in his later years.

Highlights of the Exhibition

Drawings for the Sistine Chapel Ceiling and The Last Judgment were located in a separate space containing reproductions of both of these masterpieces. Entering this room was the highlight of the show for me. Although I have visited the Sistine chapel several times to gaze upon Michelangelo’s works, the 65-foot high ceiling and massive crowds made them difficult to view. In the exhibit, the reproduction of the Sistine Chapel Ceiling was dropped to a few feet overhead and The Last Judgment was placed at a level for optimum viewing. This arrangement enabled me to scrutinize each of the many studies Michelangelo prepared for these works and then identify the figure on the finished fresco. 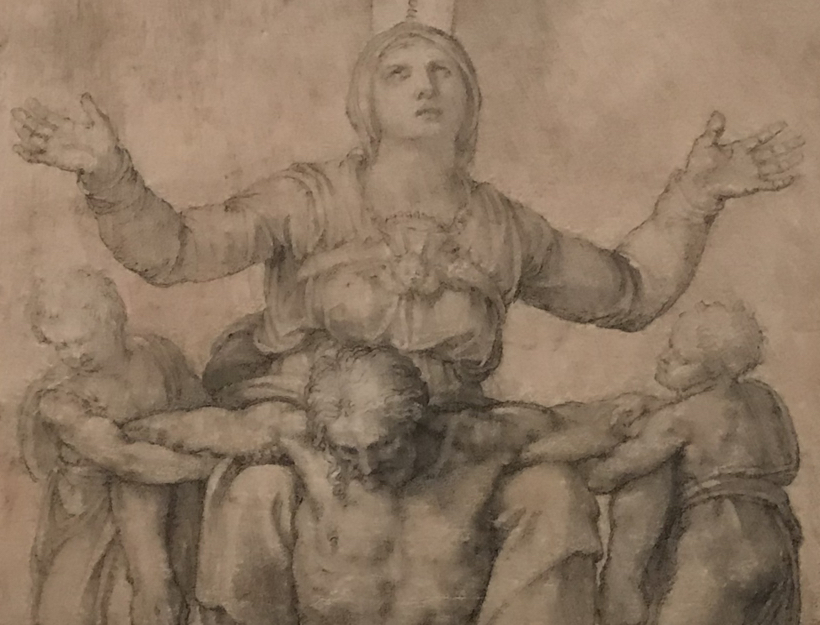 The only part of the exhibition that left me feeling disappointed was the small room devoted to the artist’s spirituality and his relationship to Vittoria Colonna. Vittoria Colonna, the most famous poetess of the Italian Renaissance, was one of Michelangelo’s most intimate friends, considered both his muse and spiritual mentor. Her influence upon the artist’s religious beliefs, art and poetry continued during the last thirty years of his life, long after Colonna’s own death in 1547. However, the slight attention to this relationship and its influence in the exhibition is corrected and covered admirably in the exhibition catalog.

For those who missed the Met’s exhibition Michelangelo: Divine Draftsman and Designer, it is still possible to taste the wondrous dishes of its menu through the exhibition catalogue prepared by Carmen C. Bambach, curator of the exhibition, Michelangelo scholar, and the Curator of Drawings and Prints at the Metropolitan Museum of Art. The catalogue reproduces each piece of art from the exhibitions in exquisite detail within the context of a beautifully written narrative of the artist’s life. Included also in this volume are five essays providing additional illumination into aspects of Michelangelo’s life and art. The catalogue, Michelangelo: Divine Draftsman and Designer, is a feast in its own right as a visual and literary biography as well as memorial to the outstanding exhibition.

Catalog of the exhibition, Michelangelo: Divine Draftsman and Designer