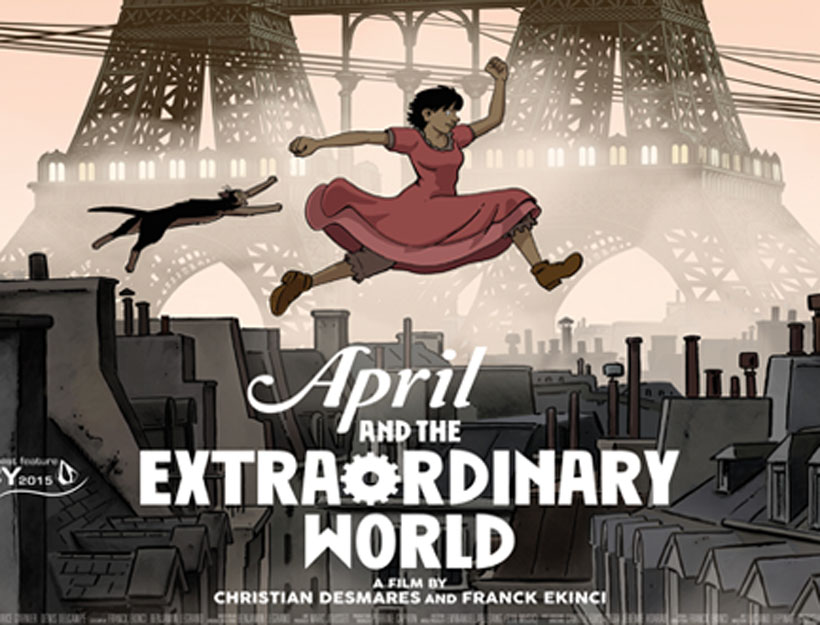 April and the Extraordinary World

Do you remember the first time you rode Space Mountain at Disneyland? If you haven’t ridden, it’s a roller coaster enclosed in a dimly-lit building. Part of the thrill is the unexpected twists, turns, and dips as you can’t always see exactly what is happening next, but you know it’s going to be fun. Welcome to April and the Extraordinary World, a cinematic thrill ride of French animation.

The title of this movie in French is April and the Twisted World, an apt title as this movie twists and turns and constantly surprises you. The movie has been described as “steampunk”, but really it reminds me more of the crazy novels of Jasper Fforde. It takes place in an alternate history and future in a world without oil and many modern inventions we take for granted. It’s part Victor Hugo’s Les Miserables and Terry Gilliam’s Brazil and Baron Von Munchausen wrapped up in conspiracy theories (think hyper-intelligent reptilians running things behind the scenes).

What is it about? It would ruin the fun to give away too much, and take too many words to describe! April (voiced by Marion Cotillard) is an apparent orphan (think Éponine) on the run from an evil police detective (think Javert mixed with Inspector Clouseau). She discovers there is more to the world, working behind the scenes, and she discovers her father is still alive and endeavors to rescue him.

I saw the film in French (with English subtitles), so I can’t comment on the voice-acting of the dubbed version. My twelve year old sons were able to follow with no problem. The patient wife and our two daughters also attended. The movie delighted the entire family and filled our conversations for the next two days, as there is so much to digest.

Be kind to yourself. This is one crazy, funny, adrenaline filled cinematic bungee jump that will transport you to places you never imagined. It deserves to be seen on the big screen. As the theater goes dark, you step into the coaster train car and brace yourself for an adventure you won’t forget.
*