For me, life is about the journey and self-discovery along the way. I have a motto: “Each year, discover a place I’ve never been – at least one!” This year, I modified it to ‘each January’, so at an unanticipated opportunity I decided to visit Antwerp to see Andrea Bocelli’s first European concert of 2018. I am delighted with my choice. While the concert yet illuminates my inner being, I am now writing on the beauty which is Antwerp Centraal Station. 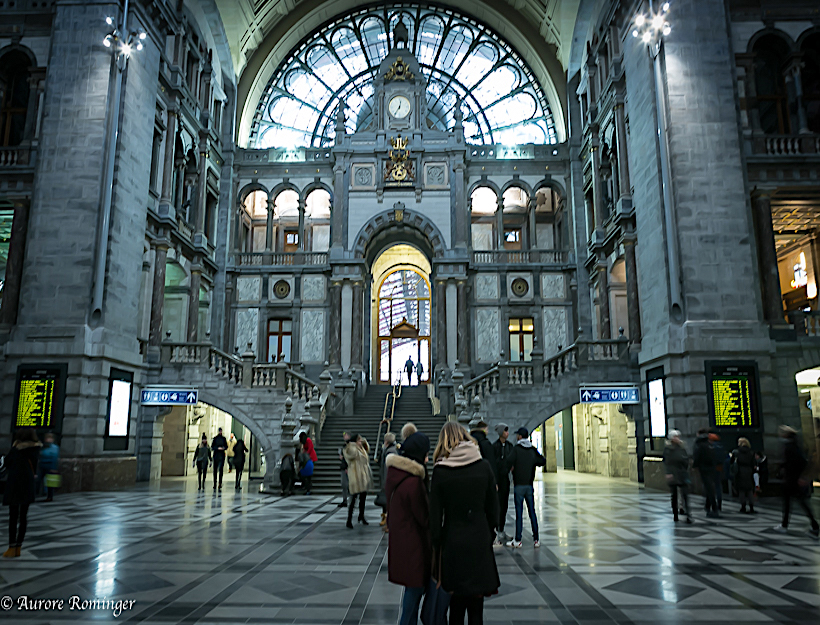 The station is now widely regarded as the finest example of railway architecture in Belgium and also holds it place in worldwide appreciation. In February 2009, Newsweek ranked the station in 4th place on its list of the world’s most beautiful stations. 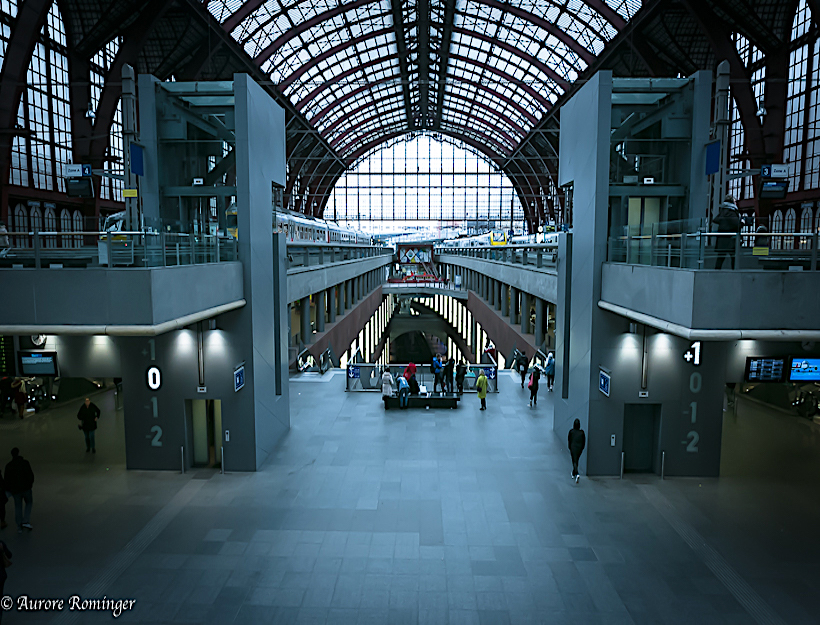 The stone-sheathed terminus buildings with their vast dome above the waiting room hall were designed by Louis Delacenserie. They are an impressive 185 metres long and 44 metres high. Along with the iron and glass train shed by Clement van Bogaert, they envelop incoming visitors with a stunning impression and spine-tingling experience. 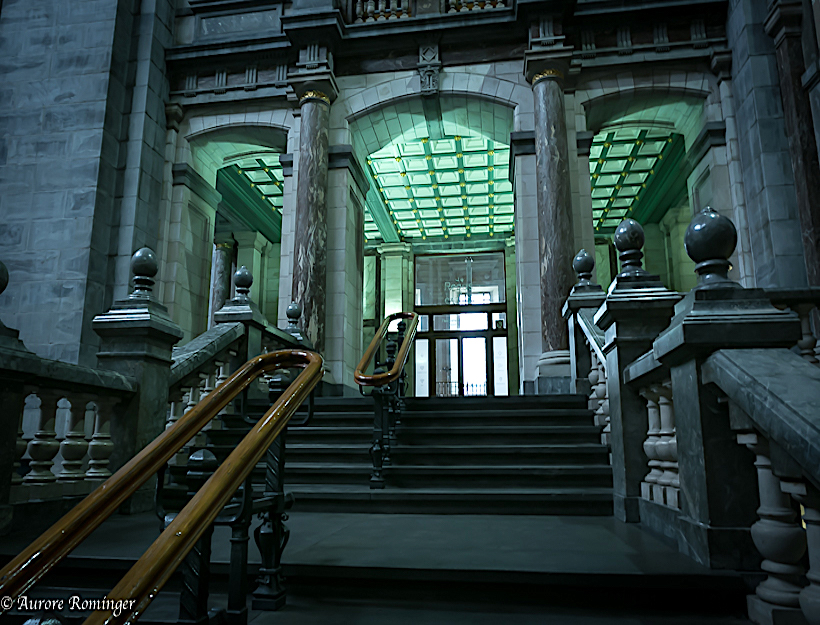 The viaduct into the station, designed by local architect Jan Van Asperen, is also a noteworthy structure. The original Antwerp station, constructed between 1895 and 1905, was a replacement for the original terminus of the Brussels-Mechelen-Antwerp Railway. Clearly a true testament to brilliant artistry, the current station’s extraordinary eclecticism with various influences on Delacenserie’s design has led to difficulties in assigning it to a particular architectural style. 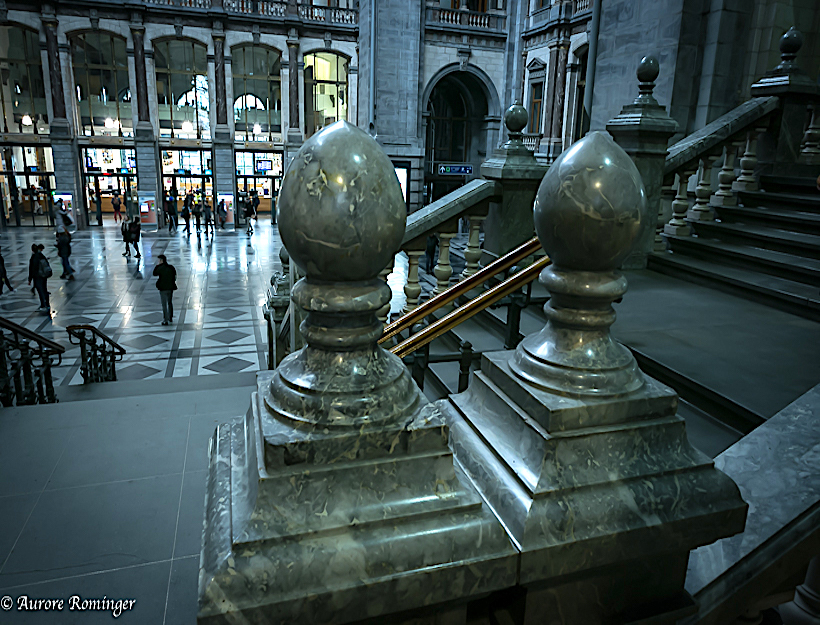 In fact, Austerlitz, a novel that received the National Circle of Book Book Critics Award by German author W. G. Sebald in 2001, cleverly employs the eclecticism of design. The protagonist Jacques Austerlitz, an architectural historian’s character, is illuminated through his keen sensibilities in appreciating the full range of the styles that might have influenced Delacensiere. 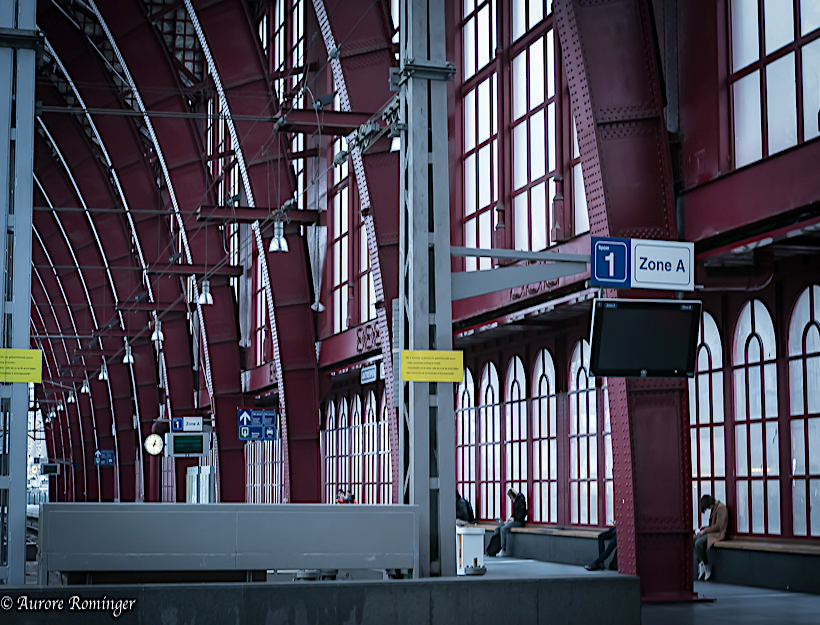 The fortuitous concurrence as he befriends the solitary narrator in Antwerp Centraal during the 1960s demonstrates and gradually unravels the history of Austerlitz’ life. Throughout the unforseen, multifarious encounters, readers gradually learn that Jacque Austerlitz arrived in Britain during the summer of 1939 as an infant refugee threatened by Hitler’s Nazis. He was then adopted by an elderly Welsh  nonconformist preacher and his sickly wife. I believe this should tickle your fancy to enjoy a very good read if you, like me, have not yet done so! 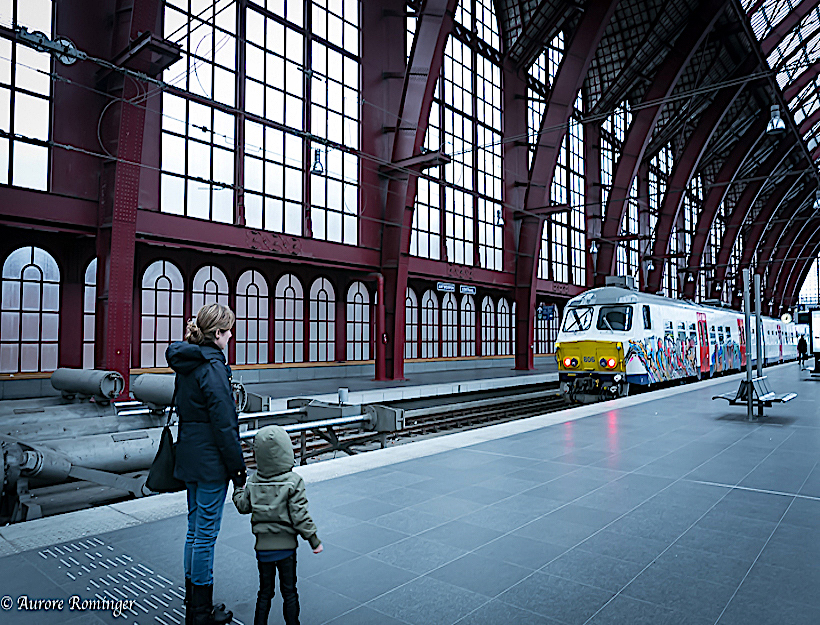 A popular activity in any station: waiting for a loved one to arrive or waiting to enter the train to continue the journey! 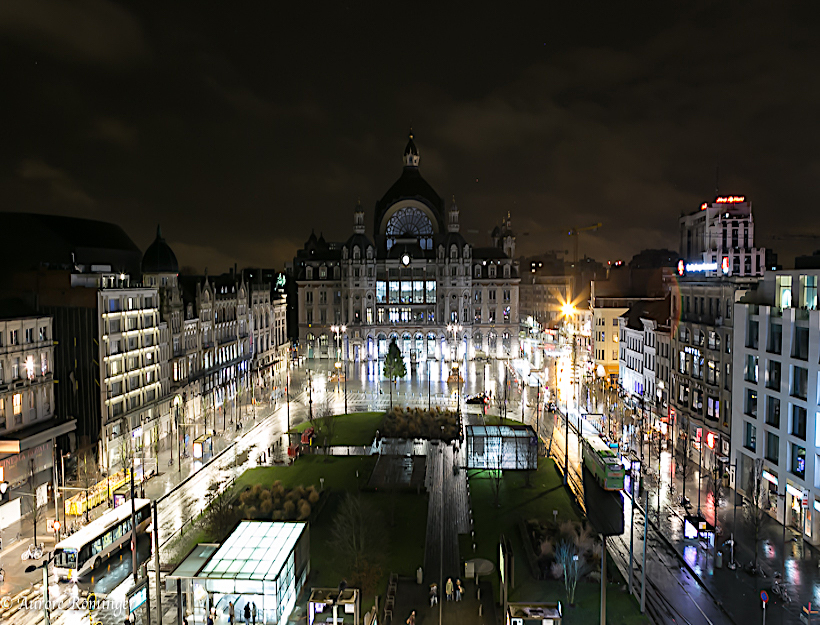 “In 1835, the first train from Brussels to Antwerp arrived in Antwerp in a wooden station outside the city walls, in Koningin Astridplein. This structure was replaced in 1854 by a new wooden station building near the Antwerp Zoo’s current entrance: East Station.

Between 2000 and 2009, the monumental building was completely modernised and expanded to accommodate the high-speed rail line. More platforms were opened on two additional underground levels, an additional entrance with a station hall was built in Kievitplein, and space was created for shops and restaurants. The unique metal platform roof had previously been restored. Since 2007, trains continue their journey straightaway and have no need to turn around thanks to the railway tunnel between Antwerp Centraal Station and the north of the city.” 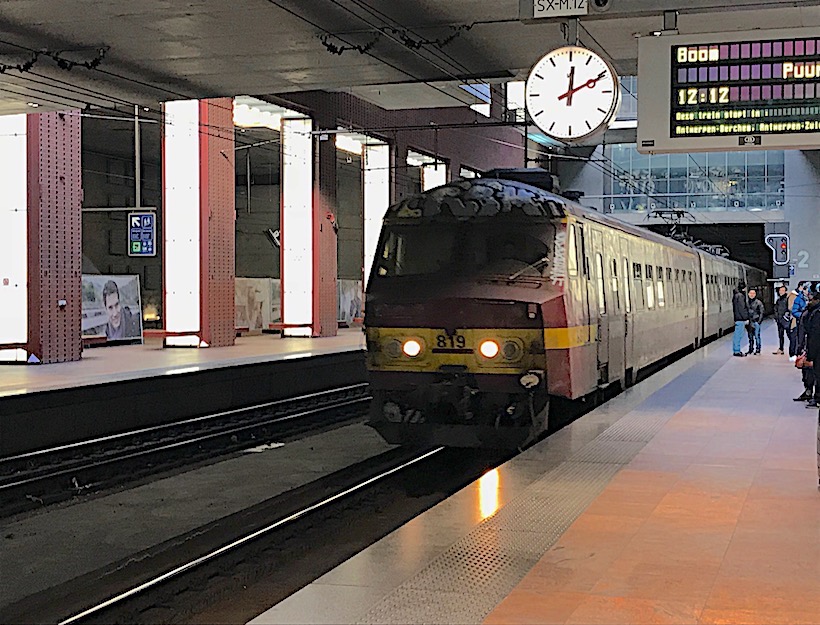 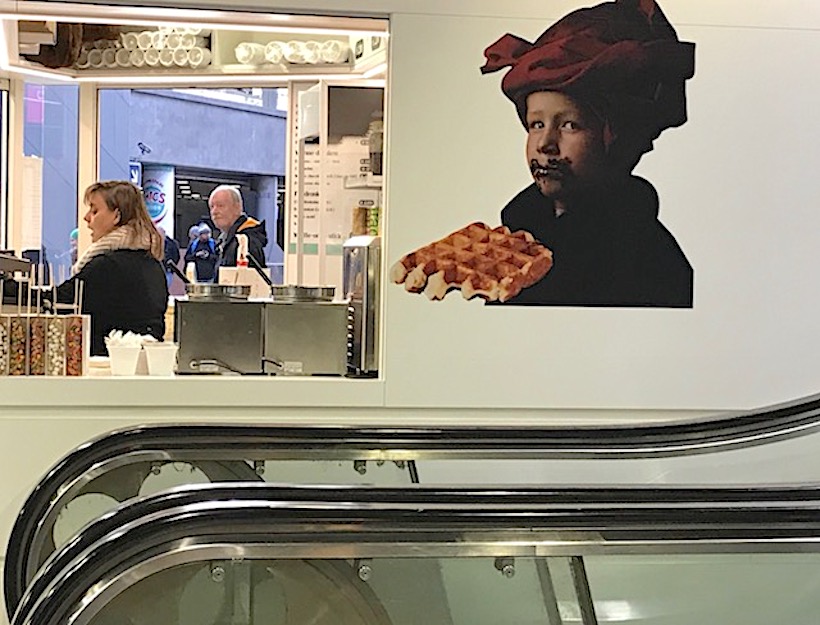 A modern looking addition to the station’s amenities!

As noted above, Antwerp Zoo’s current entrance is the East Station. In a curious moment and as an experiment, I thought to visit the zoo in the drizzle of rain to find out which animals enjoy the rain and which remain inside. I found the seemingly city-dwelling giraffes to be the most playful, the large lioness had worn a spot on the door from asking or demanding entry, the elephants seemed completely bored, and the primates were all indoors. The children, it seems, were the happiest lot of all – no matter what the weather! 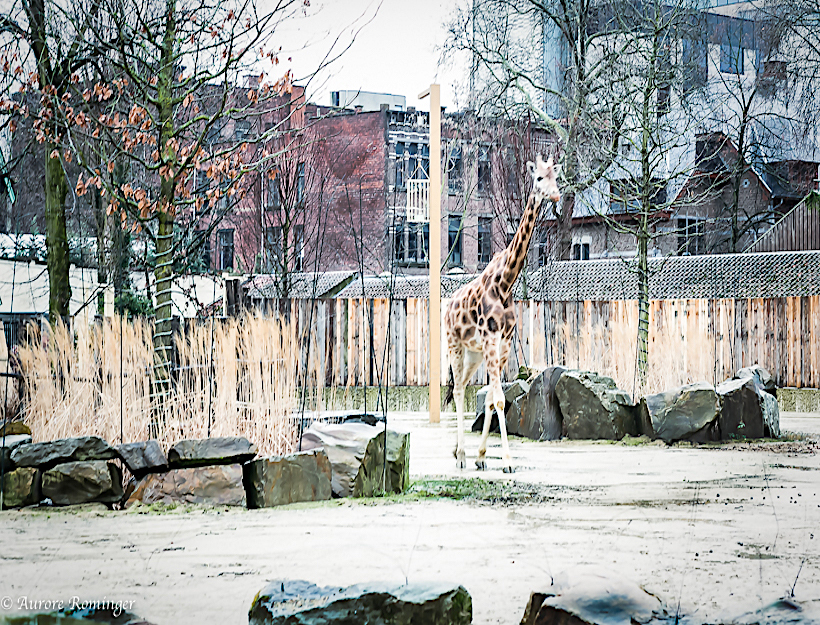 The ‘city-dwelling giraffe’ danced about in the rain! 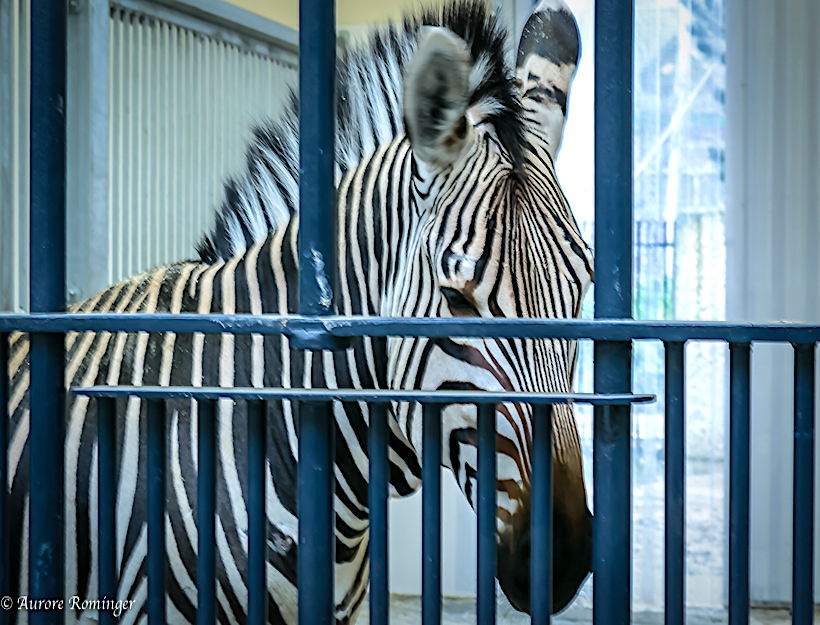 The zebra was animated and friendly. 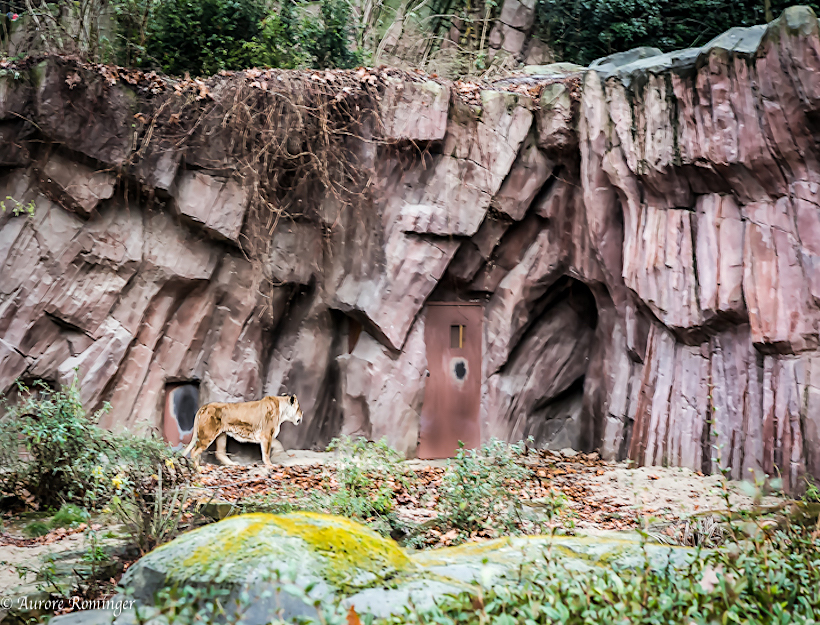 The lioness paced back and forth, indicating impatience to enter and get out of the rain. 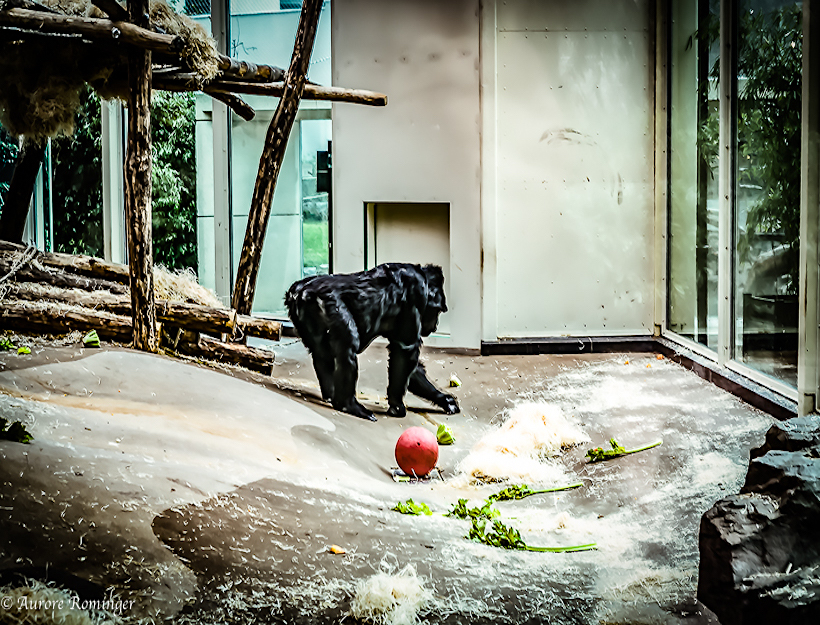 All of the primates were inside and seemed content to personify complete self-absorption, yet perhaps there is nothing else to do if you do not journey to see something new!

Happy New Year! May each and all be surprised and delighted in the moments of joy that 2018 will bring!
*