Although he did have a “box camera like every other boy around the age of 14”, Walker Evans‘ education sparked the beginning of a lifelong interest in literature. He claimed his first ambition in life was to be a writer. The photo below shows three Walker Evans: the grandfather, Jr., the father, and our subject.

Walker Evans III, as he sometimes referred to himself, was born in St Louis Missouri. As the family moved due to Walker Evans Jr.’s profession in advertising, Walker’s education tended to be spotty. He stated that he became a poor pupil early on, at about age eight. He began photography in 1930. 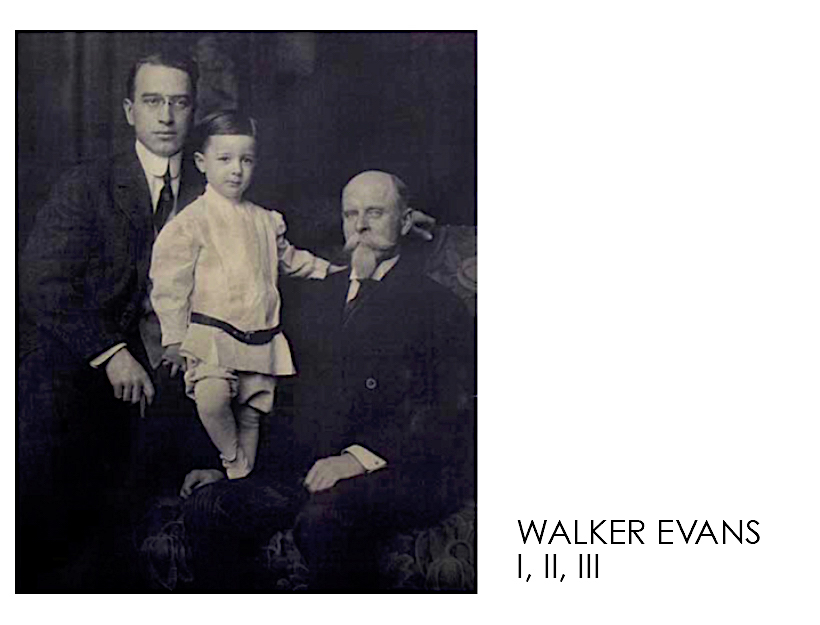 This self-assured young face of Walker Evans III remained with the man throughout his life. It is exactly the same face he showed in his 1971 interview! His education as a young man truly began after the separation of his mother and father. He attended Phillips Andover in Andover, Massachusetts, a prep school for well-to-do young boys where he found his love of reading. From 1922-1923 he studied at Williams College, a yet highly rated private liberal arts college in Williamstown, Massachusetts. His academic achievement was unremarkable both at Andover and at Williams College. Nonetheless, in 1926 he continued his studies at the Sorbonne, Paris to nourish his love of literature. He stated that his family’s Victorian values fueled his evolution.

Notably, this significance of family influence rests rather in Evans’ inner-most personal rebellion to his upbringing. He comfortably melded in France, naturally embracing the French ways of thinking. When he returned from France, he settled in Brooklyn. He was “not going to be a businessman”, but an artist – most likely a writer. Strong opposition to American economic values energised his development and contributed to his heartfelt perspectives on art and photography.

For the most part, he harbored no interest in art and reportedly felt uncomfortable in museums. He was driven by his passion for the vernacular and demonstrated it through his love for, and devotion to, photography. Evans was influenced by the French photographers Eugène Atget and August Sander who eventually would become his guiding lights. Additionally, his inner voices – which propelled his convictions – continued to whisper the vanguard of European literature from Flaubert and Baudelaire to James Joyce. Herein intellectually equipped, he rapidly developed his own distinctive visual language in the United States, through his dedication to and evolution of his photography.

Walker Evans exposed his interests as he aimed his careful attention on typical life on the streets and in the cities of America. He rejected the advancing tendency of the time to fight for photography’s standing as art. It is exactly his keen attention to notice the “ordinary and unremarkable” that contributes to the humanistic and documentary appeal in American history.

He befriended Berenice Abbott (1898-1991), an American portrait photographer whom he found while she was completing her studies in Paris as she assisted Man Ray in the darkroom. She also would be a photographer for life. She maintained – among other bits of wisdom – that:

“Photography can only represent the present. Once photographed, the subject becomes part of the past.”

“There are many teachers who could ruin you. Before you know it you could be a pale copy of this teacher or that teacher. You have to evolve on your own.”

While cultivating friendships with Berenice and other mainly European artists, Evans clearly – with that same self-assured look as a youngster – undertook his own evolution. He began to focus his photography on urban and suburban landscapes, including architecture. He was attracted to advertising signs on city walls, streets, country roads and billboards as well as to the people interacting in these ‘typical’ environments.

In 1933 he traveled to Cuba to photograph beach houses. He then revealed a series of dock workers, vagrants, and beggars as he explored and discovered daily life. He began to collaborate with Fortune Magazine in 1934. He is most well-known for his photographs from 1935, while he was commissioned by the Farm Security Administration to document farmers affected by the Great Depression.

It was for this purpose that he traveled throughout Pennsylvania, New Orleans, Alabama, Mississippi, Georgia and West Virginia. Yet, even while performing this commissioned project, he maintained a strong sense of his own personal preference in choosing who and what to photograph.

In May 1936, he followed James Agee, the writer whom Fortune commissioned to write an article on the sharecroppers of the South living in misery. It was for this story that he captured one of his most iconic images: that of Allie Mae Buroughs, ‘poster woman’ of the Great Depression. 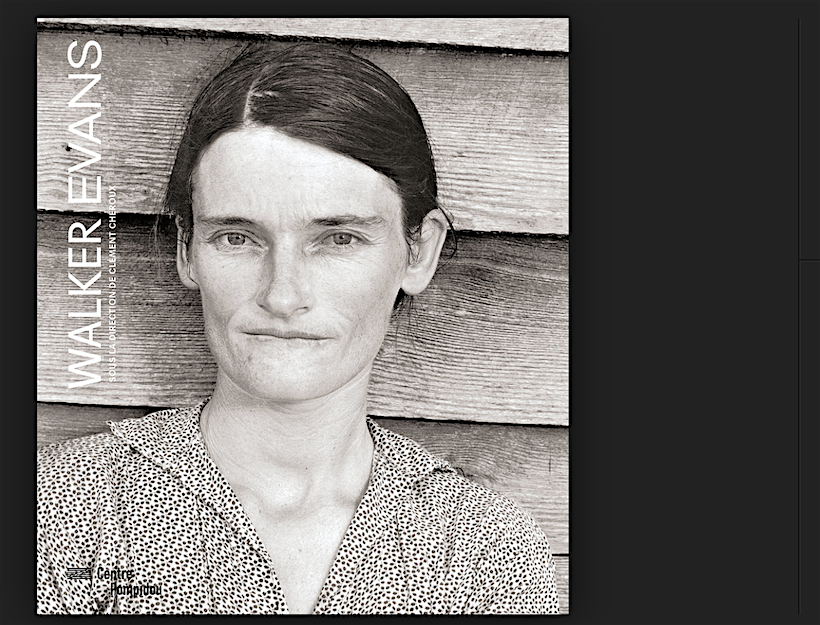 Greater notariety and success followed when, in 1938, the NYC MoMA organized and devoted the first major monographic exposition: Walker Evans, American Photographs. His subsequent collaborations included New York subway system series. He obtained a scholarship from the John Simon-Guggenheim Foundation. In a later collaboration with Time magazine, he wrote reviews of films, books, and exhibitions. After, he became a professor of photography at the Yale University School of Art.

As art, his evolved body of work now serves as the nexus among many strands of twentieth-century photography. The impact persists, as nearly all photographers in the world have been touched by his works. Below is a life-size print of Walker Evans’ New Haven Connecticut home displayed among 400 items, including images, documents and collected pieces such as signs and postcards at the Centre Pompidou. The retrospective is a befitting tribute to an apparently self-driven, self-assured photographer who had recognised the true beauty in the ‘ordinary’ – even ahead of his time. And Mr. Evans’ left us with a valuable reminder:

“Stare. It is the way to educate your eye,  and more. Stare, pry, listen, eavesdrop.  Die knowing something. You are not here long.” 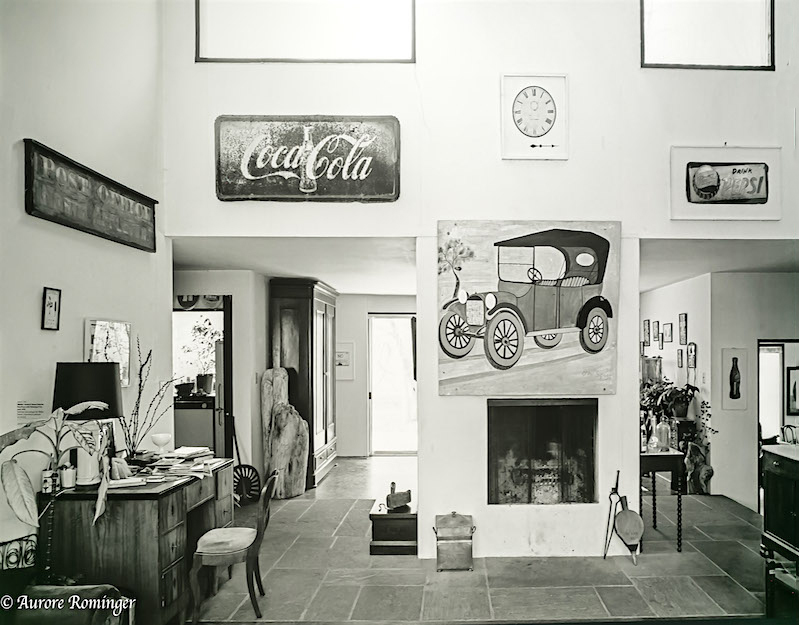